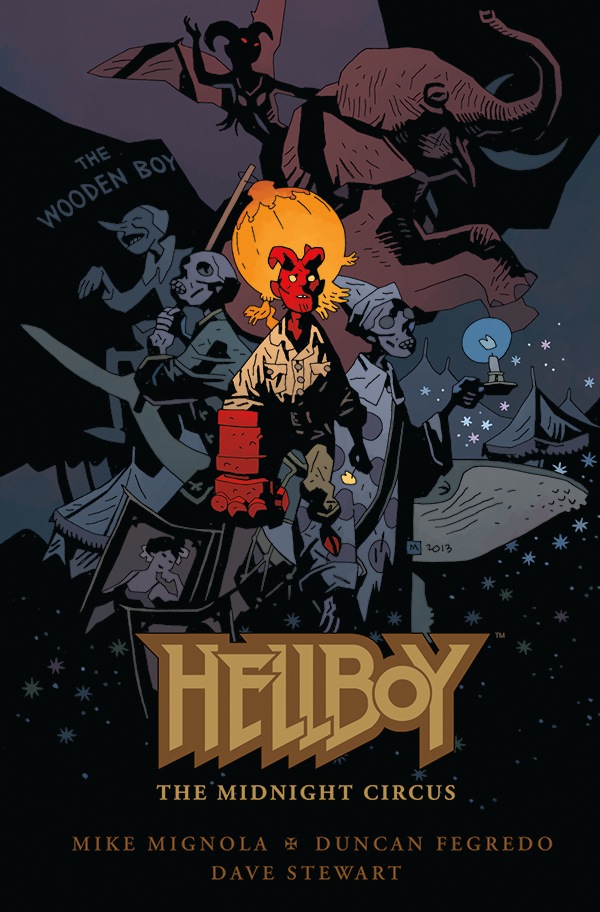 2013 was another banner year in comics, and we continue to celebrate it today by breaking down the best graphic novels of the year. These are all original graphic novels – although we flexed a bit and included a book that collected a web series (if only because the book it tied with was also published online first) – and highlight some of the brilliant work that’s happening in long-form comic book storytelling.

Take a look at the ranks below, and share your picks in the comments, as I’m certain there are many, many books we missed. 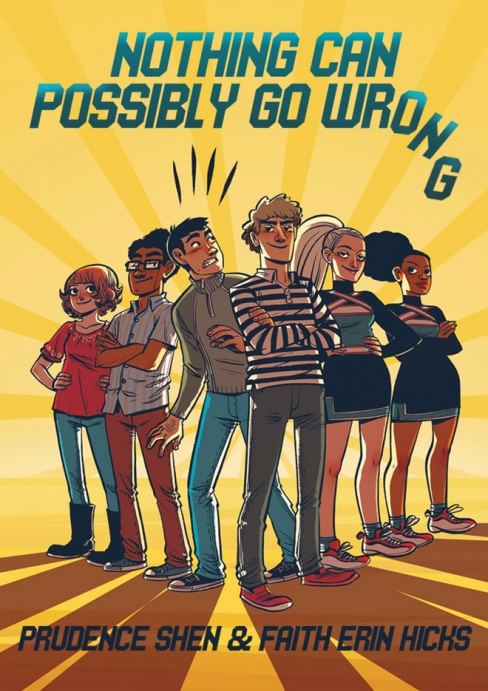 5 (tie). Nothing Can Possibly Go Wrong

Why it made the list (David Harper): I reviewed this book before for Multiversity, but let me reiterate the key points: this book is charming as all hell. In a medium where grim and gritty is the norm as of late, sometimes a book being fun can make it really stand out. Prudence Shen and Faith Erin Hicks’ crafted a comic that is about as fun as anything you can find in 2013, with energetic, effervescent art and characters who are relatable and inviting to us a reader. It’s a simple story, and one we’ve experienced variations of before (although with far fewer battlebots), but when it’s executed this well, you just want to share it with everyone you know.

This is happiness in comic form, and if you missed it, you should fix that as soon as possible. 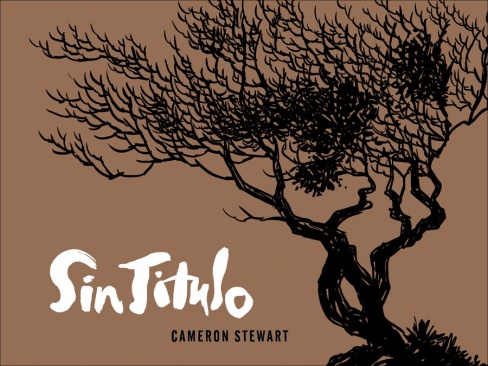 Why it made the list (Vince Ostrowski): On its surface, “Sin Titulo” has a simple mystery at his center: What sort of life did Alex Mackay’s grandfather lead while no one was paying attention? The answer is not a simple one, nor does it play out in any sort of conventional way. What follows is a journey using the tried and true noir device of your hero going deeper and deeper into a psychologically and physically perilous rabbit hole. Cameron Stewart uses a simple, but evocative cartooning style that allows for clean storytelling – even when things get messy for our hero. And they do. This cartooning is supported by a gorgeous color scheme that utilizes three colors: white, black, and tan – to lend a variety of emotions and moods to the work. Who knew three colors could be so versatile? Cameron Stewart did.

Through Alex’s journey, Stewart explores the nature of art and creativity itself. What happens when you create something? How do you nurture it? What happens if you don’t? But that’s just one of the many themes that Stewart is playing with here, all while crafting a gripping thrill ride. Stewart originally released “Sin Titulo” incrementally as a webcomic, but it ended up being one of our favorite collected novels released this year. In the transition from webcomic to full hardcover, “Sin Titulo” reveals its treasures at a faster rate than was originally possible, which only serves to strengthen itself as a narrative. Every single page ends with some sort of nugget that propels you forward. Whether it’s a cliffhanger that (thankfully) you need only a single turn of the page to resolve, or a revelation that has you immediately seeing things in a new light, “Sin Titulo” is the gift that keeps on giving until you close the back cover. 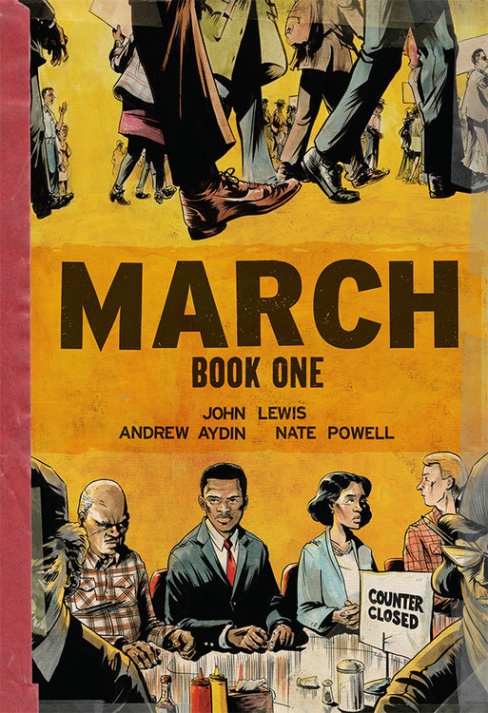 Why it made the list (Greg Matiasevich): 2013 was a particularly strong year for OGNs, with some of my favorites not even making the top 5 of our list because of the strength of the contenders. But this book did, and I can’t thank everyone who voted for it enough because it is EXACTLY the type of book that needs to be as visible as possible. Following the true struggle of Rep. John Lewis as a Civil Rights activist, Nate Powell does career-defining work here, aided and abetted by co-writers Andrew Aydin and Lewis himself. Buy it, check it out of a library, borrow a friend’s copy…whatever you have to do. It is a phenomenal and phenomenally affecting work that puts you right into the life and times of not only a great American but also a time of great change in our country. This is an important book and a shining example of why comics are every bit the equal or better than prose or film. Go and see why. 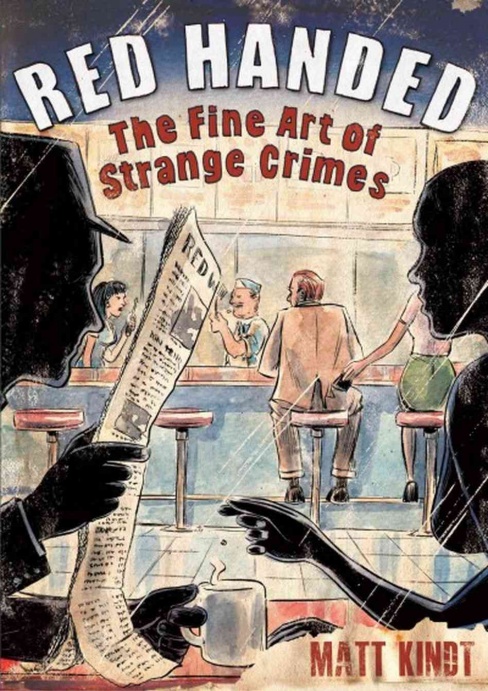 Why it made the list (Matthew Meylikhov): Intricately plotted and delivered like a matryoshka of exciting developments, Matt Kindt’s Red Handed was perhaps one of this year’s unsung heroes in the land of graphic novels. Yet, for those that read it, we were treated with one of the most curious and compelling noir/mystery stories with the sense of style and flair Kindt developed in MIND MGMT mixed with his already established nature of layering his narratives thick with clues and mysteries hidden so deep as to be relatively unseen until the end. Kindt has shown time and time again with his creator-owned work his magnificent talent as a creator, someone who sees the creative process as a deeper craft than others, and it’s with no hyperbole that I declare Red Handed a grand success in sequential storytelling as intricately woven as a spider’s web and as sharp as the best of Chandler or Nolan.

Why it made the list (Mike Romeo): For most books a long wait and high anticipation can damn a story before it even hits shelves. Readers build the work up in their minds, expectations become higher and higher, and it gets to a point where there’s no conceivable way that it could ever live up to its own hype.

This was not the case with Paul Pope’s Battling Boy.

Battling Boy shattered my expectations, far surpassing my highest hopes for what it could be. The story is about a city that has lost its greatest hero, Haggard West, just when it seems to have never needed him more. Seeing the vacuum left by West’s demise, a war god sends his son to be the savior of a city overrun by monsters. Battling Boy is presented as an all ages book, and it truly is. This is a story that can be enjoyed by everyone from fresh faced middle-schoolers to grizzled comics veterans. And it’s not just because of the fun story and amazing art work. Readers that are more familiar with comics history can see this as Pope’s declaration of a new beginning in comics. The death of the hero Haggard West, or, the tired American comics hero, is replaced by children who have been taught by a pantheon of gods and heroes. And these children, with their raw and varied influences, are truly our future. This is a book that is well worth reading multiple times, each pass giving you a new perspective and revealing something that was missed previously. And narrative aside, I think that this book is some of Pope’s finest looking art to date. His excitement is clearly on display on every page, with Hilary Sycamore’s colors driving the whole thing home. If you somehow missed this one, I can not recommend it enough. 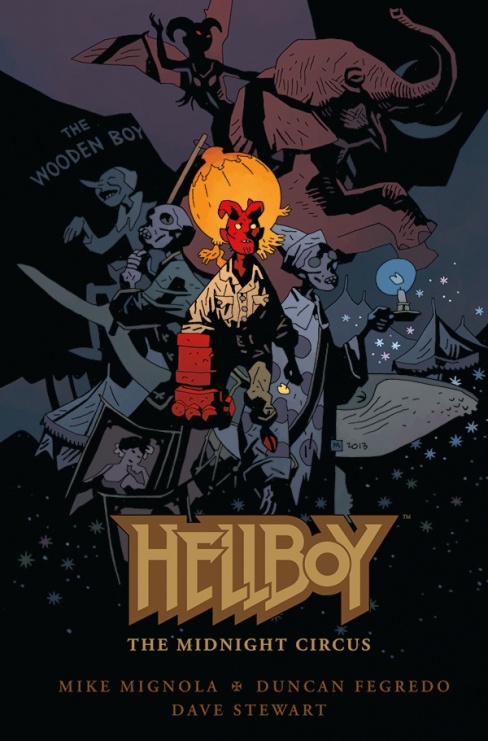 Why it made the list (Brian Salvatore): If you are asking why this is our pick for the best graphic novel of 2013, then you either don’t know us very well, or didn’t read this book. The 56 pages of this book feature some of the best work Duncan Fegredo has ever done – period – and shows off his amazing range and diverse skill set better than any other single project he has ever worked on. The story itself is one of longing to belong and fear of being different, something I think we can all relate to, and though it is told in a fantastical way, it is one of the most human and empathetic things Mike Mignola has ever written. Though brief, the book packs quite a punch, and is quite deservedly the best graphic novel of 2013.