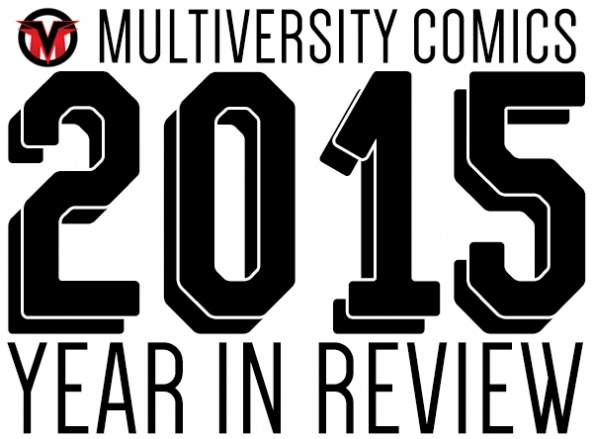 Every year, we send out a survey to some of our favorite creators and ask them questions about the year in comics. We had an incredible response this year, and got creators from all corners of the comics world to weigh in one what they loved about comics in 2015. Every day this week, we will be sharing a different question from our questionnaire.

Our third question: which writers were your favorites in comics in 2015​? 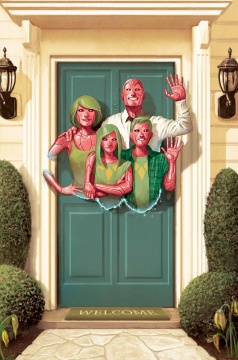 Kieron Gillen (Writer: The Wicked + The Divine, Phonogram): Let’s limit this to people I don’t know that well. Tom King has had a year, hasn’t he? “The Vision” is the this-generation-Marvel book which feels most like a “Hawkeye,” if you see what I mean. As in, a new thing which other people are totally going to try and ape. Well done him. Steve Orlando has done fascinating work, between “Virgil” and “Midnighter.”

Curt Pires (Writer: The Tomorrows, The Fiction): Ellis, Morrison, Gaiman, Moore all continue to be all time. I’d throw Hickman in there too. All these guys are known quantities though, I’d prefer to talk about some new writers that impressed me.

Matthew Rosenberg/Patrick Kindlon – “We Can Never Go Home,” was as popular as it was for a reason, it’s unique, technically very fucking sound, exciting writing. I like the hyperdense 25 panel talky pages they do, I like the commitment and understanding of nihilism and the way people are broken. It’s exciting, unique writing. Comics needs more of that.

Ollie Masters came out of nowhere for me to be honest. I put off reading “The Kitchen,” for reasons I don’t exactly know why, and was really pleasantly surprised when I read it. Great pacing, cutting, stylistic dialogue. A commitment to crime, but a distinctly unique voice/flavor, really looking to see what he does next.

Alex Paknadel is another writer turned friend who really impressed me. Comics that say something, are political, engaging and intelligent. There’s not enough writers doing this–and I’m always excited when someone shows up on the scene with something to say, and an intelligent way of saying it.

Chris Ryall (Editor in Chief, IDW Publishing): Ahh, man, you’re doing this to me again with writers? See my answer for artists…it’s hard to pick favorites when I spend my days trying not to play favorites, and working with and reading so many great books. I always try to be IDW-agnostic in these things and not pick the many people I love working with here. And the names I mentioned above would likely fit nicely in answer to this question, too.

Frank Barbiere (Writer: Five Ghosts, Howling Commandos of S.H.I.E.L.D.): I was so impressed and proud of my friends Matthew Rosenberg, Steve Orlando, Fabian Rangel Jr., Chris Sebela and Tom King. They all did such admirable and inspiring work — it’s really great to know people and have them constantly impress and amaze you with their work.

Chad Bowers (Writer: X-Men ‘92, Deadpool: Bad Blood): Jason Aaron’s writes about every third comic I read, so naturally, he’s a favorite. “Southern Bastards,” “Star Wars,” and “Doctor Strange” are all books I’m excited about going into next year. And both of his Secret Wars series, Thors and Weirdworld, were pretty fantastic, too.

And James Roberts’ work on “Transformers: More Than Meets the Eye” was stellar this year, as well. Can’t recommend that book enough! 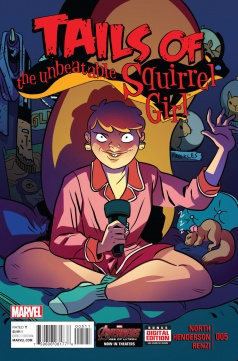 Kate Leth (Writer: Power Up, Fresh Romance): It’s self-serving, since I joined the Canadian Club over at Marvel alongside Chip Zdarsky and Ryan North, but they’re two people who happen to be some of my favourite writers in the biz. Chip is one of the funniest dudes alive and Ryan is smarter than all of us combined. I also love Kelly Sue DeConnick’s raw ferocity, Matt Fraction’s dark introspection and dick jokes, and G Willow Wilson’s bravery and humour. There’s so much good out there right now, the list could go on forever. Jeff Lemire! Jason Aaron! Marguerite Bennett! Marjorie Liu!!!

Erik Burnham (Writer: Ghostbusters: Get Real, Galaxy Quest: The Journey Continues): Gosh. Good stuff from so many quarters. Mark Waid. Grek Pak. The magical puns of Katie Cook, wherever I can find them. Cavan Scott on “Doctor Who: The 9th Doctor!” Brian Lynch for the gift that is “Monster Motors”…and also, I think I want to be Jeff Parker when I grow up. (I also have the sneaking suspicion I’ll realize another dozen folks worthy of mention just as soon as I send this off. Forgive me, everyone, and just take it for granted you’re surely on the list lost in my mind!)

Skottie Young (Artist: I Hate Fairyland, Rocket Raccoon): Jason Aaron takes the top spot for me. This guy can write any genre and knock it out of the park.

I’ll call our Jhonen Vasquez again for “Invader Zim.” The voice is still there and I can’t get enough.

James Tynion IV (Writer: Batman and Robin Eternal, The Woods): Matt Rosenberg. Tom King. Marguerite Bennett. Steve Orlando. Genevieve Valentine. There’s a lot more out there… It feels like we’ve hit that moment that comes every five years or so when a new generation of writers steps up to the plate, and makes their voices heard. It’s always an exciting moment, and I think we’re starting to watch it unfold in front of us. It’s PRETTY NEAT.

Marguerite Bennett (Writer: DC Comics Bombshells, A Force): Kieron and Jamie on “The Wicked + The Divine” (I’m sorry, I have a little trouble separating creative teams, knowing how much folk influence each other) has been a blast. Even when it devastates me, that comic puts a smile on my face.

Robin Herrera (Editor: The Bunker, Letter 44): Jhonen Vasquez and Eric Trueheart really killed it on “Invader Zim.” Ryan North on “The Unbeatable Squirrel Girl” – that comic is so consistently jam-packed with humor, I find myself wondering how any one person can have that many jokes up their sleeve. Also loving “Ms. Marvel” still – G. Willow Wilson has created one of the most realistic teenage superheroes I’ve ever read.

Jacob Semahn (Writer: Goners, Marvel Universe Ultimate Spider Man): Mariko Tamaki’s “This One Summer” was amazing (also, with art by Jillian) and Eisner winning. Also a great up and comer is Adam Smith for his beautifully (and sparsely) written OGN, “Long Walk to Valhalla.” That book took my breath away. It’s like Terrance Malick realized in prose. Simple but powerful words paint an emotional picture with some great art by Matthew Fox. 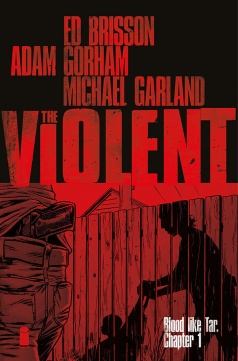 Sebastian Girner (Editor: Tokyo Ghost, The Goddamned): ONE, the author of “One-Punch Man” is the best writer of superhero comics today.

Robert Hack (Artist: The Chilling Adventures of Sabrina, Archie Vs. Predator): James Robinson is doing really interesting stuff with “Airboy.” Chip Zdarsky’s “Jughead” is awesome and always makes it to the top of my to-read pile.

Ryan K. Lindsay (Writer: Negative Space, Headspace): Matt Fraction and Rick Remender both seem to be enjoying the wide open ranges of Image Comics to tell stories they dig and are actually about something. This sort of exploration of comics as a medium like no other, as well as a story to actually inform our worlds, always excites me. Then Ryan Ferrier continues to floor me with how knock down funny “D4VE2” has been and yet has emotional beats within a narrative really gunning for the red line.

Michael Moreci (Writer: Roche Limit, Burning Fields): There’s a few that come to mind, particularly Brian Wood and Curt Pires. I really have a lot of respect for writers who are trying to challenge their readers in the best way possible, whether through elevating their content or experimenting with the comics form. Also, I think Tim Daniel — and I’m partial here, as we co-write together — is doing really great things with “Enormous.” I sat next to him at NYCC, and that thing flew off his table all weekend long. Fans love it, it’s being turned into a TV series, and sales are great. Not only that, but it’s a really interesting book that I think will surprise people in all the right ways.

And I cannot forget Rick Remender. He’s one the stars I steer by. Never lets me down. 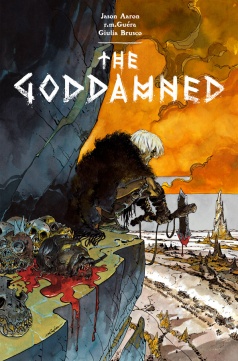 Kyle Strahm (Artist: Spread, We Will Bury You): Having written “The Goddamned,” “Southern Bastards” and “Star Wars,” it has to be Jason Aaron.

Ryan Browne (Writer/Artist: God Hates Astronauts, Blast Furnace): Charles “Chuckles” Soule did a wonderful job writing the narration in “God Hates Astronauts.” I don’t know if he writes anything else, but those few blurbs were really solid. Someone hire that guy!

Steve Orlando (Writer: Midnighter, Batman and Robin Eternal): My favorite writers this year also are hard to nail down, there was a lot of great work! I have to mention Tom King, who does amazing, nuanced work on “The Vision,” “The Omega Men,” and “Grayson.” I’ve also loved Matthew Rosenberg, Frank Barbiere, Jody Hauser, Ryan Ferrier, Genevieve Valentine and David Walker, who have all been reliably putting out smart, exciting books in 2015.

Andrea Sorrentino (Artist: Old Man Logan, Green Arrow): Jeff Lemire. He’s in my Top 5 all-time favorite writers, and working with him is a pleasure but also a privilege for me. “Descender” was one of my favorite reads of the year, and I can’t wait to read “Plutonia.” Also, the man is going to give a moody approach to the X-Men that i know i’m going to love.
also, Grant Morrison for “The Multiversity” and Jason Aaron, mostly for “Southern Bastards.”

Also, anything Ryan Browne writes is funny and that’s something everybody needs. More funny.

Michael Walsh (Artist: Secret Avengers, Hank Johnson: Agent of Hydra): Jason Aaron – He can write so many different genres I just end up reading so many of his books that I have to put him at the top. Can’t wait to really get into The Goddamned.

Sanford Greene (Artist: Power Man and Iron Fist, Ame-Comi Girls): I this might sound kinda biased, but David Walker on “Shaft” was outstanding.