This isn’t celebrating just binding a few issues together; all of the choices for this category were lovingly crafted, enhancing pre-existing work with meticulous packaging, extra features added, and a sartorial eye, making sure it looks perfect on your shelf. 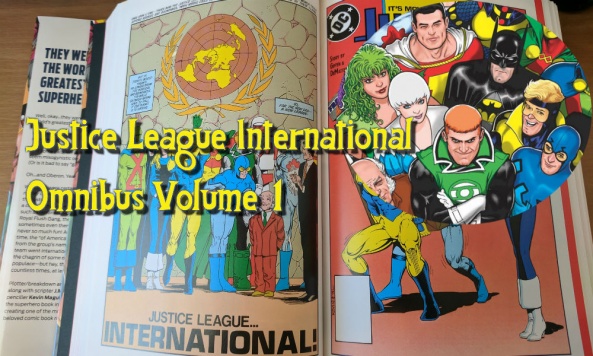 Let me tell you a story. Where I live, every classic is really hard to get. I have been hunting the “Justice League” run by J.M. DeMateis, Keith Giffen, and Kevin Maguire for years, collecting some single issues and some digital trades from comiXology at any given sale. To be honest it’s been a little complicated. Until now!

Finally, DC Comics honors one of the best runs of the Justice League as it deserves, with a monster of an omnibus, featuring over 1100 pages, from “Justice League” #1 to “International” to “America” #30 and the first arc of “Europe.” This story was groundbreaking, on an era of postmodern comics like “Watchmen” and “The Dark Knight Returns,” they managed to make a statement: you focus on the serious, gritty stories, we’ve got the comedy. Leaving the action on the side (without forgetting about it) and focusing on character development, the creative team explored really meaningful stories that have been turning into classics worth reading.

Beginning the entire series with Maguire’s art, meant that they were planning on focusing in something more intimate. Everybody has already praised his ability to make facial expressions and how it contributed to showing us a more realistic and relatable Justice League.

With characters that can be reflected on people we all know from life. I mean, everybody knows an asshole like Guy Gardner, and everybody has wished to be Batman and nock him over with a punch. And that simple, mundane thing is a great example of what makes this an awesome series. In a world of gods like Superman and Wonder Woman, we get to enjoy human characters, with flaws and mistakes, like everybody else.

The collection has an introduction from DeMateis, afterword by Giffen, and sketches and covers mainly from Maguire. There are reports of some books with two errors on the first printing, a word balloon missing and two pages in the wrong order, just be aware of the possibility and keep an eye. But overall, it is the perfect opportunity to read this masterpiece. – Ramon Piña 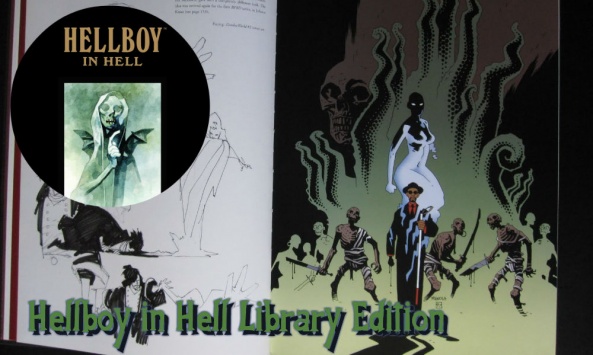 How can anybody go wrong with an oversized library edition of Mike Mignola’s “Hellboy In Hell”? The answer is you can’t.

When Hellboy died back in 2011 nobody knew what would happen to the character, but then Mike Mignola announced he was going to write and draw a comic with Hellboy wandering around hell. This became the epic “Hellboy In Hell” story that would end up closing the Hellboy saga forever. Honestly ‘epic’ is the wrong word. This story is poetry and there is something about how Mignola’s intertwines art and story throughout this ten issue run that transcends the comic medium, making this Library Edition more than book, but instead a piece of art.

That being said this massive “Hellboy In Hell” Library Edition volume is the seventh installment of a series of the Hellboy Library editions. The book is in an oversized format with a black cloth cover, gold foil lettering, and is printed on premium gloss paper. The book itself includes an introduction by Scott Allie (long time Hellboy Editor), the entire ten issue run of the series, extras stories like The “Exorcist of Vorsk” and the meta-contextual tie-in story “The Magician and the Snake,” an afterword by Mike Mignola, and has an overly expanded sketchbook. And when I say expanded… I mean expanded. There are pages and pages of lovecraftian monsters, demons, giant bugs, victorian buildings, mountains, puppets and much, much more. I spent about a half hour myself going through the sketchbook section.

That being said this is a book any Hellboy will love, and at the same time something any new comer to the series can easily pick up and enjoy cover to cover. If you don’t own this book, you should buy it. – Christopher Lewis 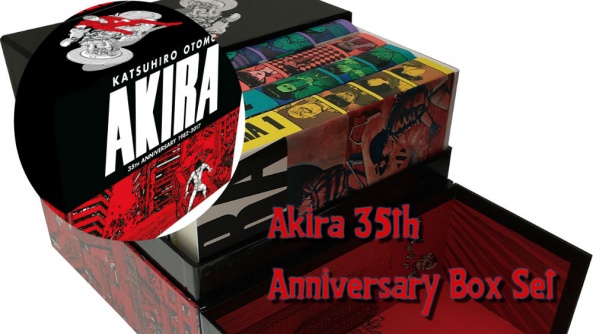 This collection is huge. Don’t misunderstand: collecting the entirety of Katsuhiro Otomo’s epic masterpiece is a big deal, but that’s not what I mean, this box set is literally massive. All six volumes of “Akira” are bound in hardcover, with a seventh hardcover volume that’s slightly larger and filled with supplementary material, all contained in an impressive, durable box with unfolding doors magnetically held in place. There’s even an iron-on patch with the iconic pill design included too.

This is the first time that the collection has been released in English in the true right-to-left reading format of the original Manga, and the “Akira Club” book that accompanies the set contains all the original color title pages and covers to give you the closest replica to Otomo’s work that Western audiences have ever been exposed to. There’s a part of me that wishes it was in full color like the Marvel “Epic” releases of the early ‘90s, but once you start reading through the volumes, that desire soon fades away. Besides, Otomo’s linework is so crisp and detailed that color would only detract from the impact.

The “Akira Club” art book has been released previously by Dark Horse, but the collection wouldn’t be complete without it here. The book is staggering in its completeness; along with the aforementioned title cards (over 100 of them) there’s also preliminary sketches covered in Otomo’s notes, alternate artwork and layouts for action sequences, posters, advertisements, merchandising and behind the scenes photos and details from the 1988 anime adaptation. It’s a gorgeous treasure trove that I’ve spent more time poring over than I have actually reading the manga so far.

Each hardback volume of “Akira” has a slipcover that closely emulates the style of previous releases, but take those off and you’re treated to a wonderful wraparound design drenched in the chosen color of that volume, that honestly I would have on my shelf over and above the slipcovers (if that idea didn’t go against every fiber of my being). Once you open the books you’re treated to a breathtaking montage on the inside covers that are unique to each volume, and I’ve got to nearly 400 words without even really touching on the manga itself, which is a testament to how good this collection is.

“Akira” is a called a masterpiece for a reason. Those who have only seen the movie are in for a whole new experience, as the anime only really goes as far as the end of volume 2 (plus adding on its own ending of a sorts). Comics readers are divided between those that have read “Akira” and those who have it on their reading bucket list, but whichever camp you fall into, if you’re going to dive in then now is the time, as Otomo’s seminal saga has never looked better. It’s a masterclass in choreography, structure and detail that’s better than you could imagine, and it’s deserving of the decades of praise. – Matt Lune

Matt: I love reprints because this is where people who clearly love comics put a great deal of effort into presenting comics. With all the care and effort going into making them, it’s difficult not to see that come through when you’re reading the story or just appreciating all of it.

Brian: I’m of two minds about oversized collections and omnibuses, which are the books we are representing this year. When done properly, they are gorgeous and, for collectors like me, I love knowing that everything is in one, convenient place. But, they can also be unruly and make the reading experience literally a chore. While I don’t think my back could handle reading the 1100 page “Justice League International” omnibus in bed, the other two are much more conveniently constructed. All three are beautiful.

Alice: Was there any chance the “Akira” boxset wasn’t going to win this one? For one, it’s “Akira” and it shoots to the top of any ‘Best Of’ list it finds itself on and for two, it’s a lavish box set collection with deluxe, hardcover editions of each volume that are finally available in English and correctly formatted to read right-to-left. While the other two entries aren’t anything to sniff at, the “Akira” boxset was a defining moment of 2017 in comics.