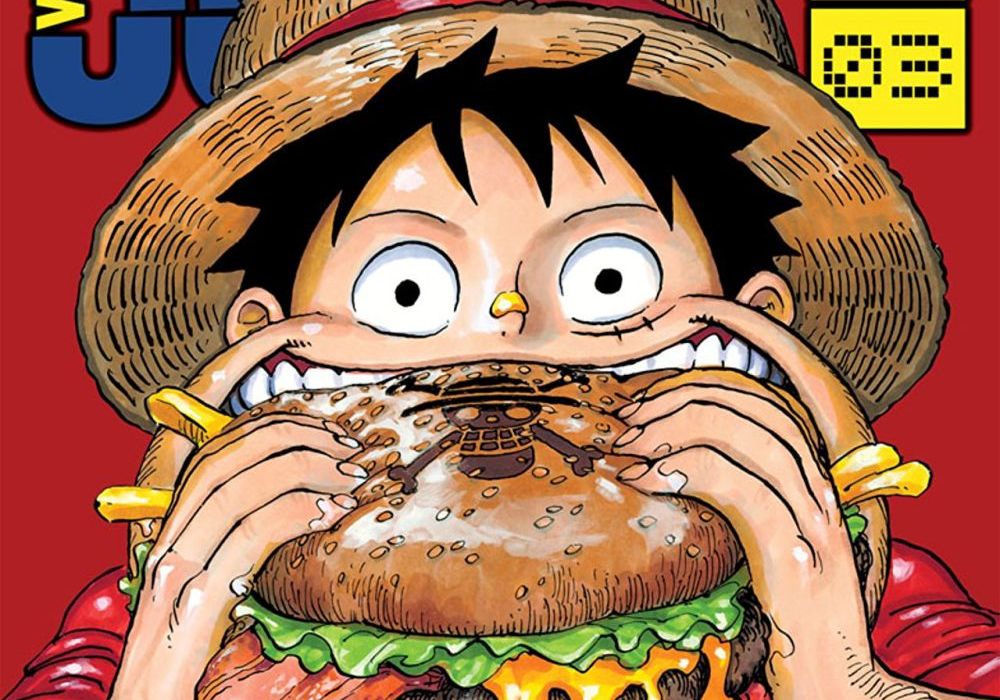 Anthologies have been a major part of comics for as long as comics have existed, yet they have somewhat fallen out of favor in the past few decades. That said, there are some really incredible anthologies currently being printed, and we’ve chosen three – two series and one standalone one – to highlight today. 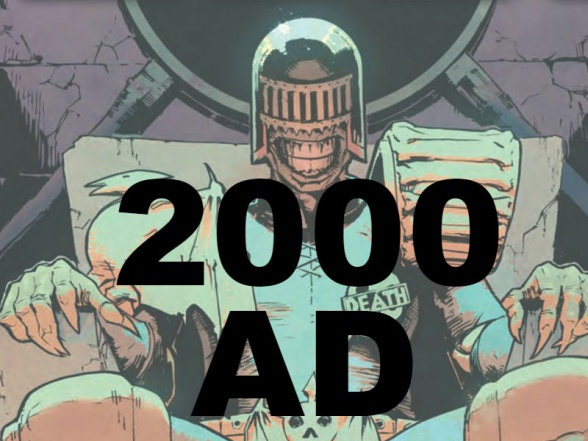 Forget all the zarjazz about exactly how long a production run this book has been on, just remember that “2000 AD” is pretty much the platonic ideal of a sci-fi comics anthology, although those issue numbers alone are certainly something that all others aspire to. There’s the iconic lead character, Dredd, who’s nearly become synonymous with the brand. There’s the wealth of long-running stories, running the gamut from years-old to decades-old, that continue find gold in the thematic veins they mine. Looking for incisive and biting social commentary, you came to the right place. Want towering, blast furnace powered mechs fighting winged hell-beasts? We’ve got a table for you right here. There’s the richly textured variety of art styles that range from painterly brush strokes to digital precision to multi-medium collage. From day-glo intensity to stark black-and-white minimalism. Truly this book defies the concept of having a house-style. And even if it didn’t, it’s house would probably have 1000 rooms.

In fact, the tricky part in taking stock of “2000 AD” at year’s end is that it generally executes its mastery at such a high level that it’s a little hard to see what separates the last 12 months from the previous dozen. However, 2018 saw the return of a few modern classics. “Brass Sun” came back to continue a swashbuckling, clock-punk epic that’s amongst some of the most unique aesthetics in comics. “Brink” stayed the course with its thrilling blend of investigative procedural and space station drama – the common denominator between them both the deceptively simple but wonderfully intricate lines of INJ Culbard. Peter Milligan reached deep into his bag of tricks to make sure that “Bad Company” stays in good standing. And at the same time, new stories like “Mechastophales” and “Skip Tracer” made the leap from obscurity to establish rich mythologies of their own. Striking a sublime balance between flights of fancy and subversive speculation, “2000AD” is as equally tailored for those who want to escape the world as it is for those who wish to see it through the glass of a blackened blast helmet darkly. Timing-wise there’s every reason we need to see the nerds gone wild of “Survival Geeks” juxtaposed by the hard-living, intergalactic border patrol of “Grey Area.”

And all that’s before we really mention Joe Dredd himself. Somehow, this character continues to mine our world to tell every manner of story within his. The scope and feel of this strip changes just as quickly the artists and writers. But whether it’s darkly comic, deadly serious, or spastically slapstick it’s always, undeniably Dredd. And while the world might have lost a true master this year in Carlos Ezquerra, the titan of Mega-City One set the bar so high that nearly anyone placing that helmet on Dredd is also placing the world on their shoulders. Indeed, a look over the past year showed Chris Weston, PJ Holden and Henry Flint punching at the top of their game. And, unless you’re reading “2000 AD” you’ve likely missed out on some of the best artists in the business.

So what is it that makes the weekly prog so potent? What is about an annual retrospective that makes the cumulative storytelling look like a damned behemoth? The simple fact is that week-after-week, strip-after-strip it’s a venerable parade of talent. Dan Abnett, Gordon Rennie, Ian Edginton, Rob Williams, Neil Googe, John Burns, Henry Flint. It’s a trove of riches that absolutely no one would be embarrassed about. And it’s more than worthy of being highlighted as one of the year’s best comics anthologies. – Kent Falkenberg 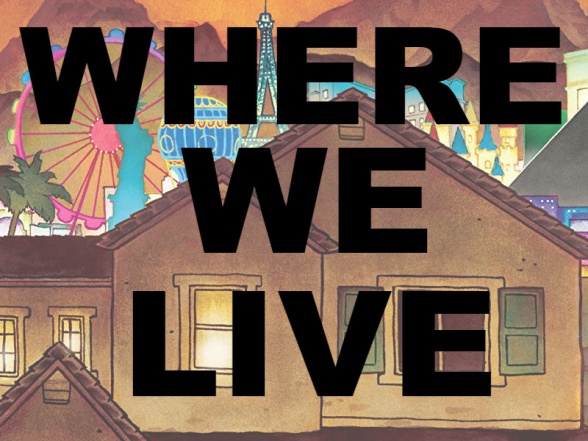 2018 was the year of the charity anthology. From “Mine!” to “24 Panels” to “Puerto Rico Strong” the way for the comics community to raise funds for charity is the anthology. Artists and writers can come together to express their beliefs, in their own style, over a common theme.

But what makes “Where We Live: Las Vegas Shooting Benefit Anthology” stand out from the rest?

Front and center is the use of survivor and eyewitness accounts throughout the work. While a few touched on the events of October 1, 2017 more centered on the days, weeks, and months that follow, a manifestation of how traumatic events leave a long-lasting if not permanent imprint on a person. We owe much to these folks who relived such horrors so that the rest of us can understand and comprehend this fright and fear.

“Where We Live” also includes prose pieces alongside the illustrated works. Some of these are the survivor/eyewitness accounts, other unpack complex issues that would not get the time and space for a proper exploration if done in sequential format. Sometimes pictures need to take the backseat to words, and the editors made wise choices in their choice of medium for each piece included here.

Anytime a mass shooting happens, there’s the inevitable question of: why? “Where We Live” does look at this question, but wisely does not provide a single, cohesive answer — because there really isn’t one. The web of the American gun culture runs wide, deep, and intertwined: from a society that glorifies gun culture (even from the pens and pencils of the comics we love and our creators bring forth), mental illness, special interests in government, prejudices against who the ‘typical’ shooter is or should be. Knowing this “why,” rather, the multitude of facets that make up this “why,” can be key to coming up with a lasting, bipartisan gun control solution.

The “Where We Live” editor made it clear in his foreword that the work’s goals are to help victims’ and survivors’ families and dive deep into the social problems with our gun culture. To do this while toeing as centrist of a view as possible (meaning, without dipping into finger pointing at one side of the aisle or the other as either the only source or the only solution to the problem) is a tough feat, and could be that work that starts the bridge to this political divide. – Kate Kosturski 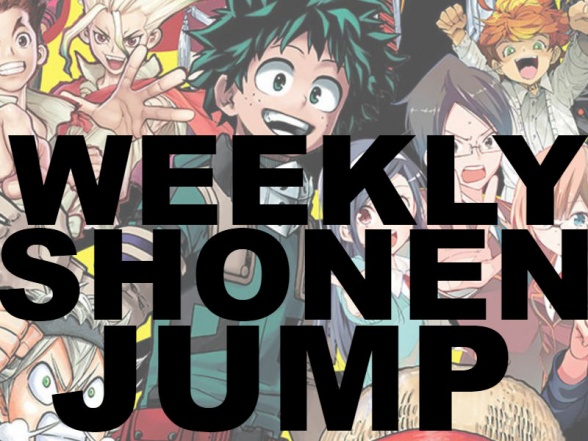 Viz Media’s Weekly Shonen Jump is, quite frankly, one of the best deals in comics right now. For $25 a year you get around 200 pages of manga per week, along with the occasional new series (called “Jump Starts” in Viz parlance) that, based on reader feedback, sometimes get picked up and added to the magazine’s repertoire. It’s an astonishing amount of content for the price point, and while the anthology skews heavily towards action, it also contains comedies, romances, and sports series as well. Manga makes up most of what I read comics-wise, but I do think there is a little something for everyone here.

This year was a particularly good one for Jump’s regular line-up. One of the great joys of reading the magazine is the sheer variety of art styles you’ll experience week to week, from the bold, crisp lines of “Dr. Stone” to the zaniness of “One Piece.” Story-wise, we experienced plenty of exciting developments throughout 2018, with “The Promised Neverland,” “My Hero Academia,” “Food Wars,” and “One Punch Man” being some of the standouts. In particular, “One Punch Man” (written by ONE and illustrated by the exceptional Yusuke Murata) continues to be a favorite of mine, with its gorgeously detailed backgrounds and fantastical, often ridiculous, cast of characters that any fan of western superhero comics can appreciate. “One Piece” and “My Hero Academia” are the juggernauts they’ve always been, as the former has moved into a fun samurai-influenced arc and the latter has seen the introduction of several interesting new characters and plot elements. There are a few series in the magazine I don’t read, but this is a very small nitpick considering the sheer amount of content released per week.

Always looking to inject new life into its roster, Shonen Jump also had its fair share of one shots, miniseries, and Jump Starts in 2018. One of the most memorable miniseries was “The Comiq,” a murder mystery by Kazuki Takahashi of “Yu-Gi-Oh!” fame, and a fascinating addition to a mostly action-oriented anthology. We also got a handful of new sports and comedy Jump Starts that may or may not be considered for permanent inclusion in the magazine. While not all these series were home runs in the end, their inclusion shows that Shonen Jump is dedicated to representing a wide range of genres within its pages and will likely continue to do so.

With an upcoming switch to a more convenient format allowing subscribers access to a huge amount of the magazine’s backlog in English, Weekly Shonen Jump is only going to get bigger and better from here. Whether or not you’re a frequent consumer of manga, this is an anthology well worth following if even one series piques your interest. – Emily Myers

Brian: For someone who never read many foreign comics outside of a few classics and OGNs, both 2000 AD and Weekly Shonen Jump have been instrumental in getting me to broaden my horizons. Both books offer a ton of variety and, especially in the case of Shonen, incredible value, as Emily said. With their new format, I hope more folks check out their offerings, as for $1.99 a month, you get access to nearly limitless manga. It’s absurd.

Matt: I just love these because it’s the easiest way to discover new talent and variety. I wish something like this would stick better State-wise, and it seems like it should have a stronger presence. Still, the odd graphic novel-length collection is still a cool way to get into a broad swath of comics.