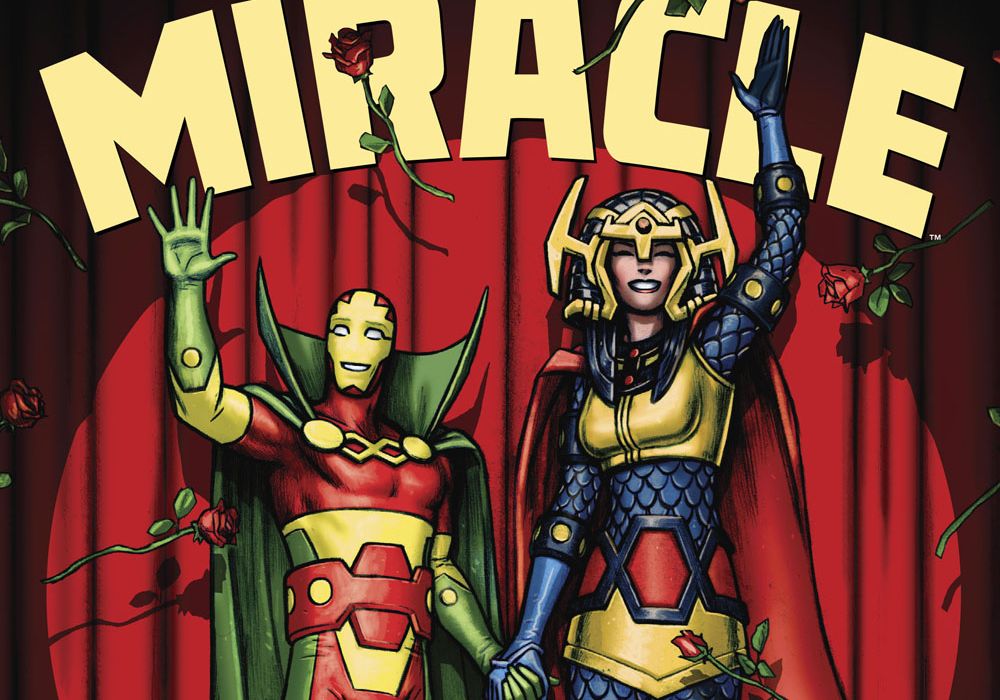 Whether in a brick and mortar comics shop or on comiXology, the cover is the first thing we see of a comic. It is what we (often, unfairly) judge a book by. A good cover artist is salesman and recapper at the same time. This list is a phenomenal one that covers covers (see what I did there?) of all kinds. 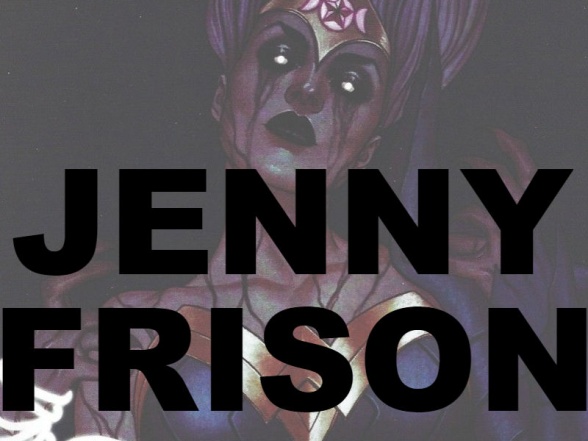 It’s hard to put my finger on what makes Jenny Frison’s covers so appealing. Just when I think it’s because she’s so great at making hauntingly eerie images, she puts out an equally great cover like “Wonder Woman” #52, which has a Norman Rockwell level of playfulness. Clearly the secret to her covers is deeper than the general mood. Then I think it’s because her characters are making eye contact with the reader and demanding engagement, but along comes “Wonder Woman” #54, where she’s in profile with her eyes closed. Yep, still appealing.

It could be her coloring, she has a lighting style that gives all her figures a soft look, like you could poke the picture in the shoulder and it would give a little before you hit the muscle. Her backgrounds tend to be subtly textured instead of flat. Even when she uses bright colors, which is rare, they retain a muted quality that is distinctly not comic bookish. Of course, it’s not her colors at all. How could it be, when her pencils have the same smooth appearance? Naturally, the appeal must reside in the pencils, then. Her grasp of anatomy? Her eye for collar bones and gentle curves instead of straight lines?

I feel like I’m cheating you, dear reader, because even though Frison was my top pick for cover artist this year, I find myself utterly unable to explain why she belongs here. It could be that I lack the vocabulary, but I prefer to think that Frison has that indescribable quality. All I can really say for sure is that Frison’s artwork transcends my expectations for a cover, and that she remains the only artist who can inspire me to buy a comic that I have no intention of reading, just so I can display it among my other gems. – Drew Bradley 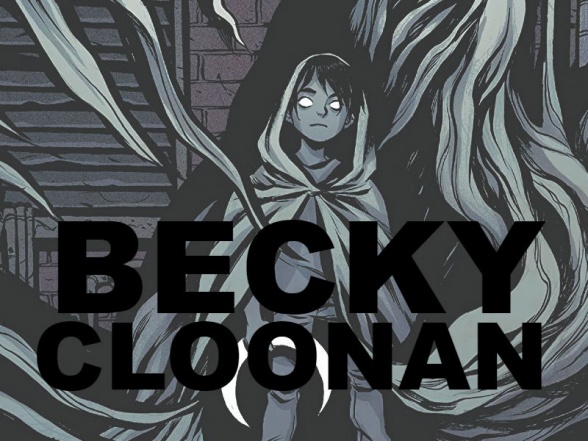 You may not be able to judge the inside of a comic book by its cover, but if it’s got Becky Cloonan’s artwork on the cover, you’re going to want to buy it anyway.

After taking over cover duty for the latest run of “Moon Knight,” that became the case for me, I had to collect this artwork. On her debut issue, #194, she encapsulated the darkness of the issue with the limited colour palette of white, grey/blue and black and her linework gave the shadowy tendrils a strong sense of movement. The cover also hinted at the contents of the issue, with the spotlight shining on a young Marc Spector mirroring the revelation of the source of Marc Spector’s multiple personalities. Two issues later, with #196 she draws Moon Knight meditating in a brain, not only a representation for the direct interaction with the subconscious within the issue itself but provided us with the definitive cover for Bemis’ run on the title.

However, Cloonan’s work this year wasn’t limited to “Moon Knight” and she shows her range as an artist on “Shade, the Changing Woman.” On the series, Cloonan’s work is flooded with psychedelic patterns and colours that create a fluidity between the subject on the cover and their background and is demonstrated clearly on #1 of the series, with Shade’s hair disappearing into the water below her. I think my favourite cover for the series though, would have to be #2, which depicts a double exposure of Shade within a heart. Now, I know I’ve got True Detective to thank for my love (read: obsession) of double exposure artwork and since the show’s success, I’ve seen a lot more artists engaging with the technique but that’s not to disregard Cloonan’s originality. Instead, Cloonan succeeds in adding another technique to her repertoire and the cover she created works not only as a captivating piece of art but also by evoking the themes of the comic itself.

With this being her second appearance in the Top 3 Cover Artists in the last two years, it’s hard to deny Becky Cloonan as one of the best in the business right now. – Luke Cornelius 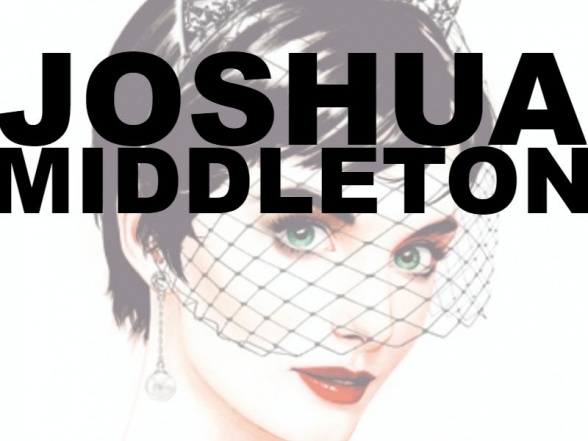 If you weren’t reading “Aquaman” already for, you know, one of the best runs on the character of all time, then surely you’re at least looking at Joshua Middleton doing God’s work on the variant covers. It seems every time a new Middleton cover is released by DC Comics, my Twitter feed riots. Artists and retailers alike praise Middleton’s graceful and glorious work, talking about that majestic Atlantean royalty. All the covers fit for a king.

Middleton has been doing variant work on “Aquaman” since Rebirth began, and it seems that his covers have just continued to get more stunning. They’re all painterly. Sometimes photo-realistic, and yet so versatile. Many depict Arthur and Mera more abstractly, the outlines of their faces surrounded by various shades of one main color. The painterly covers contain more muted color palettes, and look almost like portraits of the denizens of the deep. Each one isn’t just a portrait for the sake of having a portrait or pin-up, like many variants are wont to do, but they capture in essence the contents of the issue. Minus the last one that is an Aquaman movie variant, but that’s forgivable.

Middleton also picked up the regular “Batgirl” variant gig around the turn of the calendar year, and has lately been painting beautiful portraits of Barbara Gordon that absolutely belong in museums. They all look like Babe herself posed for the painting. The most recent, in a sort of meta representation, has Babs looking from a portrait forlornly at the reader, scales in one hand and knife in the other. Never do any of Middleton’s characters look exploitive, but all look fierce and emotive. All are front and center. His sparse use of background in most of the variants makes the portraits pop, and the faces more affective.

Middleton also created the 1980s variant for “Action Comics” #1000, and drew what might be my favorite of his works of 2018 with his retailer-exclusive variant of “Batman” #50. The wedding variant has Selina Kyle front and center, pale-skinned, with that intricate Joëlle Jones-designed wedding dress on a white background. She’s staring at the reader with just a hint of a mischievous smile, forecasting what was to come in the issue. Joshua Middleton has proved that he is at the top of DC Comics variant cover team, and while I’d love to see him bring his talents back to the interiors of a comic once again, I look forward every month to seeing my Twitter feed blow up with what beautiful thing he’s come up with next. – Kevin Gregory 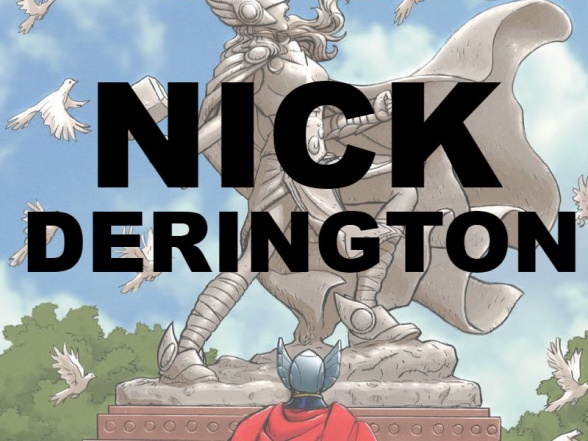 Nick Derington’s covers remind me of the film posters you see that are created for foreign markets. When you see them, they undoubtedly reflect the work inside the book, but take it in a direction that is slightly left of center, often focuses on the emotional underpinning of the issue, rather than the events that take place inside the book. His “Mister Miracle” covers, especially, reflect this; each of those covers gets at the heart of what is found within, even when it doesn’t show an actual scene from the book.

The cover featured above, for “The Mighty Thor: Gates of Valhalla” #1, features the back of Odinson’s head, and a statue of Jane Foster. There’s no faces to manipulate to evoke feeling, but Thor’s posture, mixed with the frozen in time nature of a statue, perfectly detail the emotional wreckage that the issue deals with. Derigton’s covers never try to do too much and, really, don’t have much to do with sequential art at all. Where some covers try to show motion or movement, Derington is happy, instead, to show heart. It’s a fair trade off. – Brian Salvatore 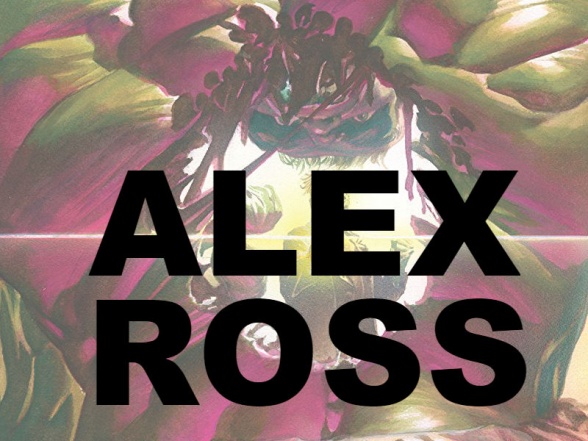 For a quite a long while I was rather down on Alex Ross: technically competent and immediately identifiable for certain, but also somewhat unexciting and staid; his cover figures felt more like statues than characters in action, trying so hard to be iconic that they didn’t actually represent anything about the story within the comics itself. But 2018’s “Immortal Hulk” changed all that, suddenly his work felt passionate, newly energized; offering an idea of a normalcy twisted beyond recognition. If you want to know what this title is all about, bringing back the green behemoth to his horror roots, you just need to look at Ross’s images, which contain within them a sense of palpable rage, The Hulk as truly horrifying engine of destruction.

While the work is still recognizable as Ross’s, it now offers a wider range of emotions: where once there was only reverence now there is terror and excitement. His “Immortal Hulk” covers offer twisted depictions of human flesh mutating and breaking, check out the sickly glowing monstrosity on the cover of issue #2 for example or the gaping chest wound that centers the cover for #3. We are seeing something that’s incredible for sure, that is incredibly scary.

For those wishing for the classic Ross approach instead, it could still be found gracing the variants for issues like “Avengers” #10 or “Fantastic Four” #1. Or, even better, you can check out the new “Captain America” title, with its bold figures featured in melodramatic poses (check out Cap holding the torn flag above his in issue #3). But even there there’s a hint of darkness that was absent of much of the earlier Alex Ross stuff, he was always the first to go for the iconic shot; Issue #1 shows Captain America’s face superimposed above the American war machine, but while it radiates power the face is also haggard, tired and beaten. – Tom Shapira

Brian: This list brings up something that really bugs me about covers (specifically at Marvel and DC) in 2018: most of these folks are doing more variants than main series covers, and their covers are, 90% of the time, far more creative and evocative than the standard covers. A book like “The Flash,” twice a month, has an incredible variant and a passable standard cover. Are the Big 2 afraid to not spell out the story on the cover, in fear that sales will drop if people don’t know exactly what is happening in the issue?

Matt: Cover art is like trying to create a one-sheet movie poster every single month, to capture an image that’s exciting and enticing for a book. No doubt everyone here captures that perfect image with aplomb month after month across numerous different books.