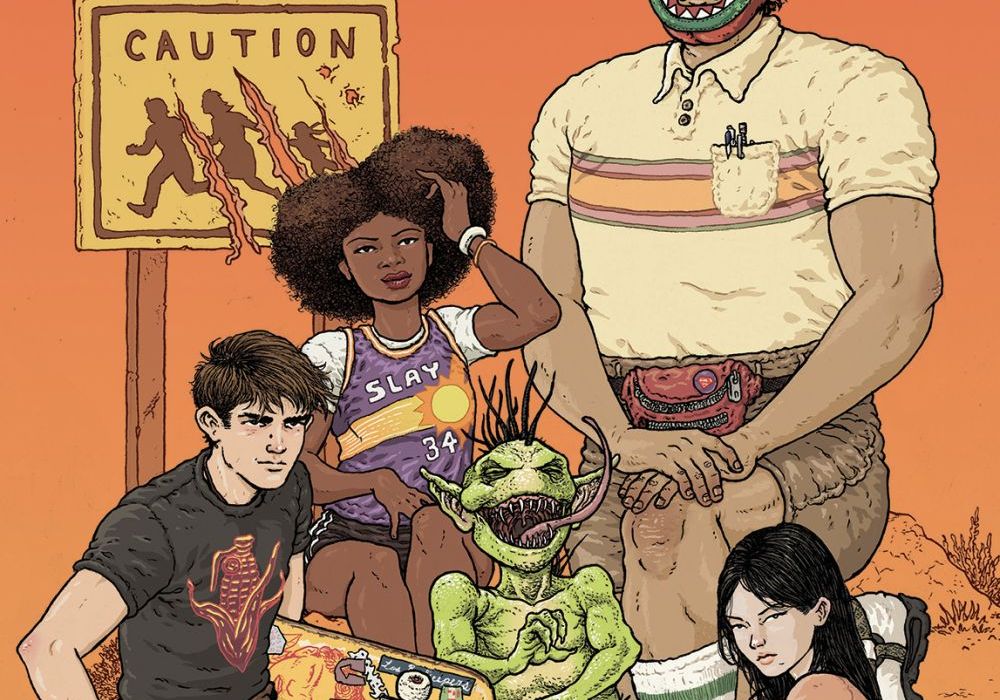 One of the more debated topics around the Multiversity Slack this time of year is ‘what exactly defines a breakout?’ Is it someone who has done consistent work, but broke through into the mainstream this year? Is it someone who had their first major work? Would an increase in overall quality count?

We didn’t really come to a satisfying conclusion, but our staff did choose some pretty remarkable choices for Breakout Artist. Let’s take a look. 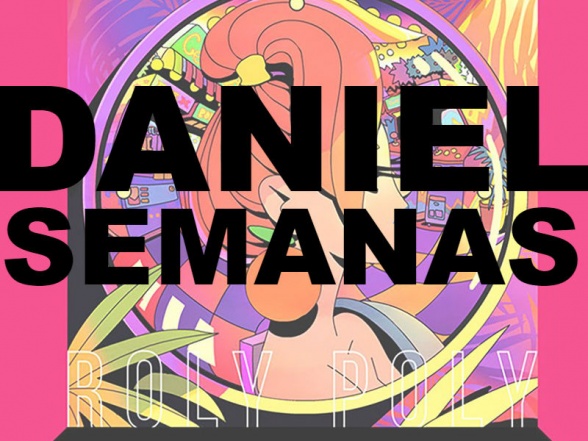 Daniel Semanas’s English language debt, the graphic novel “Roly Poly,” hit the shelves (and the readers’ eyes) with the power of a punk biker chick roaring at you at 250 miles per hour with little worry for her own existence. You best step out of the way, is what I am saying. It’s hard to decide on what to focus first, Semanas’s incredible sense of kinetic energy, etching the idea of movement so deep within our mind we can just hear the skid-marks as the protagonist’s vehicle comes to a sudden stop; the neon-colors that create a sense of pulsating city-life without ever losing the characters in the vibrant backgrounds; the super-cool HiFi designs, like the dreams of all the cyberpunk nerds transformed anew; the way the art takes its time to really open-up a scene, let the action fully fold-out.

Possibly it can all be summed up at just how sure of itself this graphic novel is, it doesn’t look like an artist finding their way, trying out things for the first or second time, “Roly Poly” looks like the work of an artist who has already arrived. “Roly Poly” has it faults, all works do, but they are, more often than not, in the realms of the story (which is also by Semanas) and not of the storytelling. It’s a book that wants a bit too much to be meaningful.

But despite these issues I cannot wait for whatever follow-up this artist has to offer: Daniel Semanas just pushed the pedal to the metal and raced past the distinguished competition. – Tom Shapira 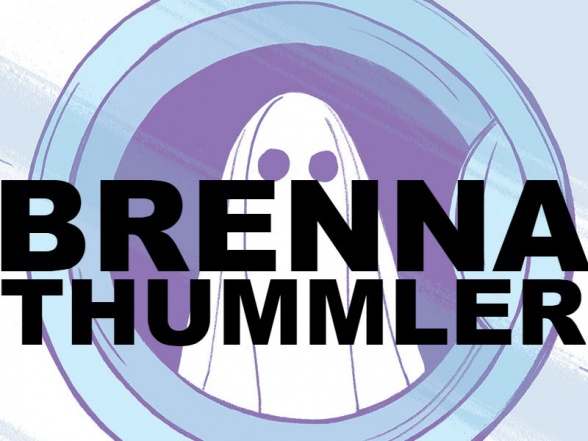 In the TV series Mad Men, it is explained that in Greek, “nostalgia literally means the pain from an old wound. It’s a twinge in your heart far more powerful than memory alone.” It’s a spirit that Brenna Thummler carried over perfectly to “Sheets,” her first solo graphic novel, about the unlikely friendship between a girl and a ghost. Her artwork, which is at once simply drawn and richly detailed, makes recall when you were a child and the world felt overwhelmingly enormous, and how’d you be drawn to the textures on a wall, the cracks in the pavement, or the padding in your coat.

“Sheets” is by no means a perfect debut. Its overly long first act is much too slow. Yet Thummler’s storytelling is so lovingly rendered, that you can forgive that it’s rather laborious to get going. The book’s pacing perhaps adds to its sweetly melancholy and poignant spirit, a reminder of when the days seemed quieter, longer and far less stressful, a time we’d all like to go back, but as the book reminds us, it’s one we must inevitably make do moving on from. I for one, cannot wait to see what delicately crafted fables and morals Thummler chooses to tell us as the years continue to pass. – Christopher Chiu-Tabet 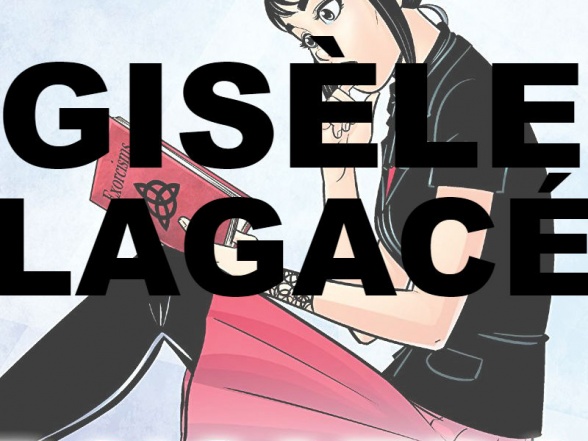 While a good writer can help to tell a story, an excellent illustrator can provide added meaning and emotion to the existing script. In this respect, Gisèle Lagacé shows her expertise honed through other projects, bringing it to the fore in “Exorsisters” to complement Ian Boothby’s writing. While Lagacé has had other work before, “Exorsisters” is the first comic series in some time to really headline her talent, especially in as high profile a publisher as Image Comics.

If one were to define Lagacé’s art style in a single word, it is “animated.” Every character has their own personal tics, from talking with their hands to a more controlled, subdued style of communication. Her style is most evident with the eponymous sisters, Cate and Kate Harrow. The Lagacé focuses in on Cate’s relative stoicism, with some basic hand motions to point things out as people would when explaining something, but otherwise using very little in the way of outward expression, even when compared to some of the frightened clients that the sisters deal with on a daily basis. This stoicism, which has an in-story basis that even further emphasizes it, is placed in stark contrast against the animated, even bubbly antics of Kate, whose posture is used to emphasize how ridiculous she is even more than her acts or her words. On the whole, the discrepancy between these two different forms of body language highlights their “otherness” while also adding significantly to the comedic timing and placement of events in the plot itself, even to the point of making things seem somewhat lacking without them in the spotlight, as their duality, especially in Lagacé’s artwork, forms a key part of what makes the work so much fun.

On the other hand, Lagacé has another ridiculous setpiece to play with: Hell itself. By merging human traits with a surreal, malleable landscape and demonic entities of varying power, she is capable of both the heights of situational comedy and the depths of supernatural horror, depending on the situation presented to the readers. Much like with the Harrows, Lagacé’s artwork relies upon body language and facial dialogue, but in a different way. By adding human traits to the infernal elements, surreal humor can come from the disparity between the two being forced together, while at the same time a disturbed kind of horror can emerge from them being too close together, in the vein of the “uncanny valley” hypothesis. – Greg Ellner 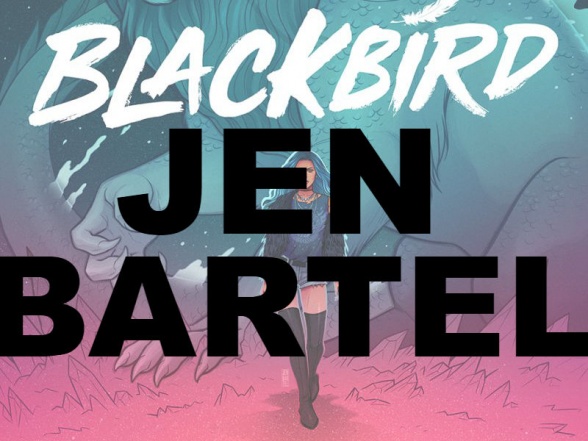 I think this is obvious but absolutely deserves to be said: Women draw women incalculably better than men draw women. The truth of it is, women draw women like they’re real people, true subjects, agents of their own free will. Jen Bartel’s women are fierce, strong, sleek, sexy (in a non-exploitative way), unapologetic, and, most of all, just free. They could be real. You know, minus being a multitude of fantasy characters.

Before 2018, Bartel was known mostly to the comic community as a cover artist, having done covers for almost every major publisher including Marvel, Image, IDW, Oni Press, Valiant, Archie Comics, Dynamite, and BOOM! She continued her magnificent cover work this year, but also did some of her first interior comic work ever. Bartel was one of the artists on “The Mighty Thor: At the Gates of Valhalla” the transition one-shot between series for Jason Aaron’s “Thor” run, and slayed in drawing the future granddaughters of the God of Thunder. She also launched a series at Image with Sam Humphries called “Blackbird,” her first ongoing work. The book is full of magic, mysticism, and SO many beautiful (and extremely fashionable) people. All of Bartel’s characters are so fashionable and out together, and there’s so much detail, care, and intent that has clearly been given to all of them. Paul Reinwand has been doing the layouts for “Blackbird,” and her recent “Black Panther” issue, and it’s clear that Bartel is still getting her feet wet in terms of interior work. That being said, her characters are already so energetic and full. There’s truly nowhere to go but up. Bartel may have only worked on interiors for five issues this year, but it is clear that she already has such a unique psychedelic, digital, anime-inspired style, and can do and will do much more than cover work going forward.

Bartel’s influence goes far beyond just those few issues though. From her Twitter accounts, she posts so many stills of goddesses of her own creation and other powerful women. She has a following as big as many of the most famous people in comics, and it’s clear that she’s not going anywhere. Jen Bartel is here to play and here to stay. – Kevin Gregory 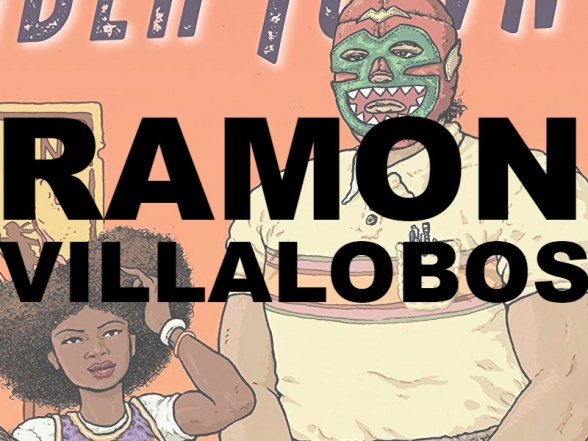 If I’m being perfectly honest, a year ago, the artwork of Ramon Villalobos never really “clicked” with me. I never found the work bad, but it was always in the context of a fill-in run on a Marvel work and just kind of never felt it really fit in the work. But then Vertigo’s “Border Town” hit and it all finally came together not only for me, but for Multiversity Comics as a whole by naming Villalobos our Breakout Artist of 2018.

Villalobos’s work in “Border Town” boasts such a high degree of detail into an almost stylized realism that makes the town of Devil’s Fork feel so alive. “Alive” is, admittedly, an easy word to say here, but that word carries a load of weight to it with a story so intrinsically tied into personal and cultural identity. You feel the grit, the ugliness, the pain etched into the town and the faces of its multitude of denizens. It can depict a place even more terrifying than the monsters that begin to tear their way into our world, themselves also examples of Villalobos’s incredible range that he is putting into this book.. However, his work is also exemplary in capturing the bright spots in these people’s lives. When the people of Devil’s Fork can allow themselves to be softer, the feeling just radiates off of Villalobos’s pencils.

Ramon Villalobos contributions in “Border Town” has helped elevate the script from “very very good” to “phenomenal” and like the book itself feeling like the breakout work of the most recent Vertigo relaunch, so too has it lifted his name out to people who perhaps still didn’t know him yet. If you have not checked the man’s work, you are doing yourself a disservice.- Ken Godberson III

Matt: I think the staff came up with some interesting choices this time around. Though I’m still not sure what makes someone a breakout. Villalobos has been working since 2009. Is it because it turned out to be particularly good year for them? Did they raise in prominence after toiling around for so long? What marks the measure of success and exposure? Certainly, it’s not making comics for Marvel or DC, because that’s just ridiculous. In any event, I appreciate the wide variety of art styles and backgrounds represented here.

Brian: I went to bat for Villalobos hard in our internal discussion, because a big part of the category, for me, is wider acceptance/attention. This year, I undoubtedly heard more folks talking about Villalobos on Twitter, at NYCC, etc, than I had in years past. This seems like it is the first year that he is in the discussion of the best artists in the game and, to me, that’s indicative of a breakout.

Also, this list is incredibly impressive. Kudos to our writers for choosing this selection of talent.