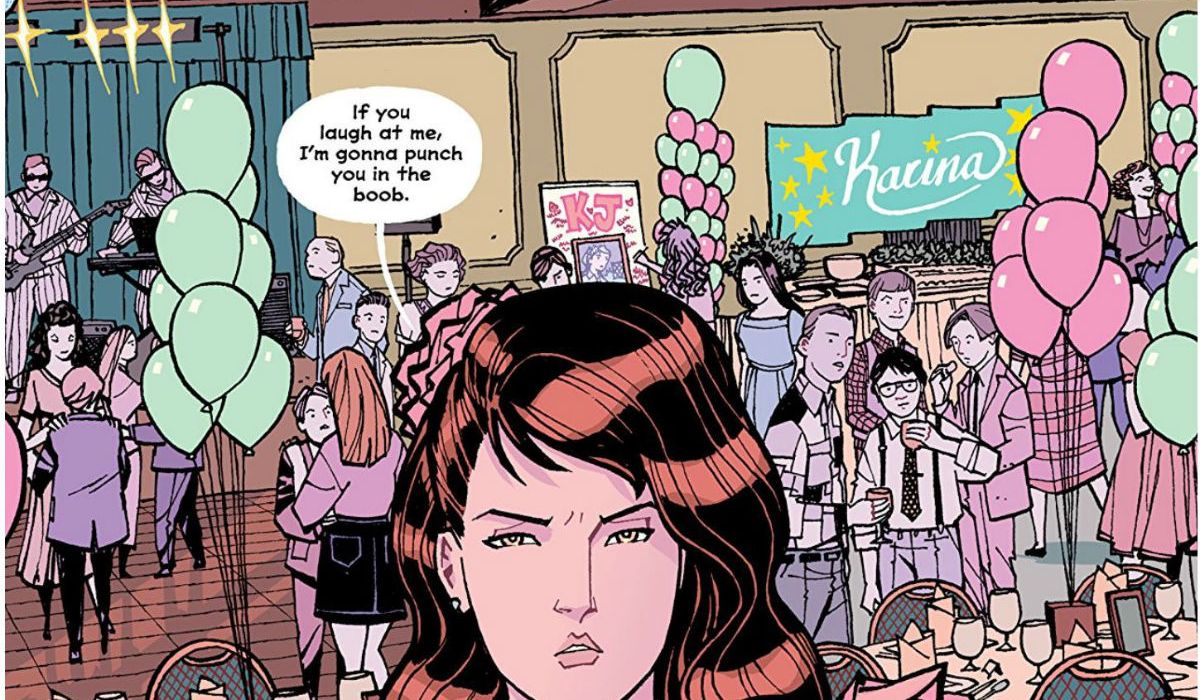 This is our fourth year calling this the ‘Dave Stewart Award.’ The reason we went to this name was two-fold: one, to honor one of the best of all time, and two, to give more creators the chance to shine, without Stewart always being in competition for the top spot. Well, we may have to rename this the “Stewart, Bonvillain, Bellaire, and Wilson” award soon, because the three top vote-getters this year have shared the top honors three years running. If that’s not a testament to their work, I don’t know what is.

Tamra Bonvillain has engaged a few comic issues this year across the board. From DC, to IDW Publishing, to Marvel, Bonvillain has shared her colorist talent in various issues this year. Her colors are expansive, they can range from bold brightness to subtle paleness. Her colors are set to the mood of the storylines and help with the pace in the issues she is featured in.

Let’s look into one particular comic she worked on this year: “Doom Patrol: Weight of the Worlds” #3-5. The way Bonvillain uses the colors sets the tone throughout the issue. Issue #3 has heavy dialogue and fight sequences, Bonvillain chooses cool colors throughout, blues and purples which draws your focus more on Beast Boy/Garfield, who has a very big part of the storyline. I find it very interesting that the use of the color red is rarely used in this issue, mainly to illustrate Lucius’ powers. Issue #4 takes place on a beach, which has warmer colors like yellows, oranges and reds. In issue #5, which takes place in a comic book realm, all the panels have the slight yellow undertone like you would see in an old comic book copy; the pages start to turn yellow with age.

Bonvillain has lent her talent to doing just cover art on various IDW Publishing stories, like “Marilyn Manor” #1 with a totally 8o’s theme; bubble gum pink, fluorescent greens and yellows to go with the genre of the story (sadly this comic was cancelled, along with “Border Town” under Vertigo). “Crow: Hack/Slash” was done with a darker look, again with the cooler blue colors to turn up the drama. I can tell she studies the story, you get the sense of this because of the colors chosen fit the theme. She never distracts the reader from the story, with me I like a harmonious read with a comic issue. Colors throw me off if it doesn’t fit the tone. I appreciate Bonvillain’s commitment to the issue she has color on; her style is translatable, easy and has range.

Her strong work seems to be in an ensemble cast of characters, there is more color she can play with. Bonvillain knows how colors can work with each other, creating tension and alleviating it. I am hoping for the next year to see more of Tamra Bonvillain. I want to see her colors one a short-run comics or limited series. Let’s hope we see her more of her work – Rasheda Smith

Jordie Bellaire is one of those absolute workhorses in the industry at this point that you know whenever you see here credits pop up on a book, you’re in for a good time. This year, in particular, has been a stellar one for Bellaire’s coloring genius.

She’s been a consistent superhero colorist throughout this year on titles like “Batman” and “Daredevil”, but I’ve loved how some of Bellaire’s more independent or lower-profile work has allowed her to stretch out. Three of my most enjoyed books from this year were titles like “Pretty Deadly”, “Killer Groove” and “Doctor Mirage”, all of which she worked on with different styles to astonishingly beautiful success.

“Pretty Deadly: The Rat” gave us a 1930s narrative setting that would not have worked at all without Bellaire’s hazy, baroque palette here. We got some classic noir tones with dark blues and blacks focalizing silhouettes, which would simmer over into warm, evening sun oranges. In “Killer Groove”, Bellaire moves forwards in time about half a century, giving us the nostalgic, faded mix of pastel vibrancy and aged browns to set the book firmly in the mid-70s. She contrasts clinical, familiar browns with bright, iconic colorings in a bar filled with golden mullets and hot pink seats. “Doctor Mirage” was where I felt Bellaire really having fun, however. In this, she combined classic vibrant superheroics with dripping, psychedelic hysteria. She uses recurring colors to convey character traits, she uses sultry, glowing blues and purples, and she throws searing blocks of vibrancy at the reader to show how dang trippy it is to be Doctor Mirage.

Bellaire is a household name in comics now and with good reason. I can’t wait to see what interesting and mind-bending work we can expect from her in 2020. – Rowan Grover

For years now, Matt Wilson’s name has been behind some of the best titles in comics. In 2019, he closed out the decade with the finales of 2 iconic Image Comics series. His muted, calm tones in “Paper Girls” blended beautifully with Cliff Chiang’s crisp linework to bring Brian K. Vaughn’s ‘80s coming of age/sc-fi/adventure book to life for 4 years and he didn’t falter for even a panel. You could argue that his defining work is “The Wicked and the Divine” where his bold, creative coloring defined the tone of the book just as much as Kieron Gillen’s writing or Jamie McKelvie’s art. Next year, he and McKelvie will be re-teaming on “Killing Horizon” which, with any luck, will be everyone’s new favorite comic.

At Marvel, he’s been a massive asset to Rainbow Rowell’s “Runaways” where his bright, vibrant colors have fit perfectly with the story of the teenage found family re-finding itself (dare me to say find again, I dare you). On a book with an art team that’s jumped around a bit between arcs, having Matt Wilson’s stellar colors have helped keep the visual language consistent.

Wilson embodies everything that’s great about a job that’s too often unsung in comics. He brings life and character to each and every book he works on and he does it better than just about anyone else in the game. – Quinn Tassin