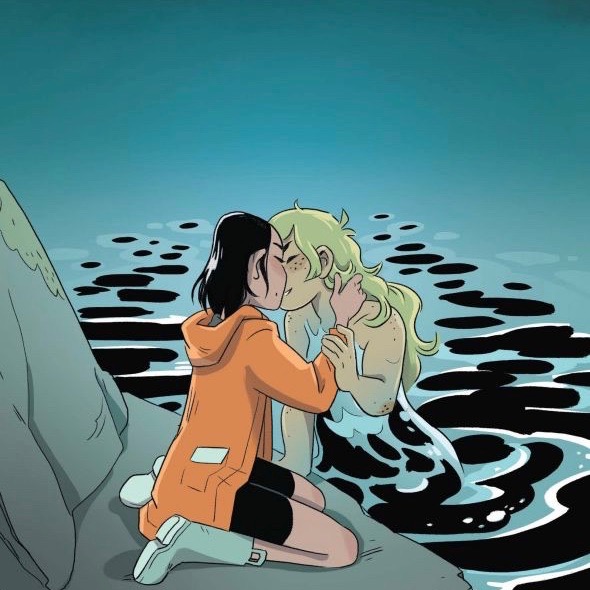 All-ages graphic novels are hotter than ever. With so much great content out there and more arriving every week, sifting through it all can be daunting. Whether you’re a parent, caregiver, teacher, librarian or young reader, Multiversity’s Bookshelf Basics is here to help. By highlighting a blend of newly released and classic all-ages books, we’ll help you build your collection, even as your tastes and interests change. In today’s installment we look at “The Girl from the Sea,” a queer YA fantasy-romance that takes place over summer vacation. 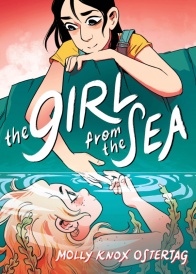 Fifteen-year-old Morgan has a secret: She can’t wait to escape the perfect little island where she lives. She’s desperate to finish high school and escape her sad divorced mom, her volatile little brother, and worst of all, her great group of friends…who don’t understand Morgan at all. Because really, Morgan’s biggest secret is that she has a lot of secrets, including the one about wanting to kiss another girl. Then one night, Morgan is saved from drowning by a mysterious girl named Keltie. The two become friends and suddenly life on the island doesn’t seem so stifling anymore. But Keltie has some secrets of her own. And as the girls start to fall in love, everything they’re each trying to hide will find its way to the surface…whether Morgan is ready or not.

“The Girl from the Sea” is written and illustrated by Prism-Award winning graphic novelist
Molly Knox Osterag. From 2012 to 2018, Ostertag illustrated “Strong Female Protagonist,” the breakout super hero webcomic written by Brennan Lee Mulligan. These days, she’s probably best known for her wildly popular, gender-nonconforming trilogy “Witch Boy” – soon to be a Netflix animated movie with original music by Haim. After only 10 years on the scene, Ostertag is a fan favorite. “The Girl from the Sea” shows us why. 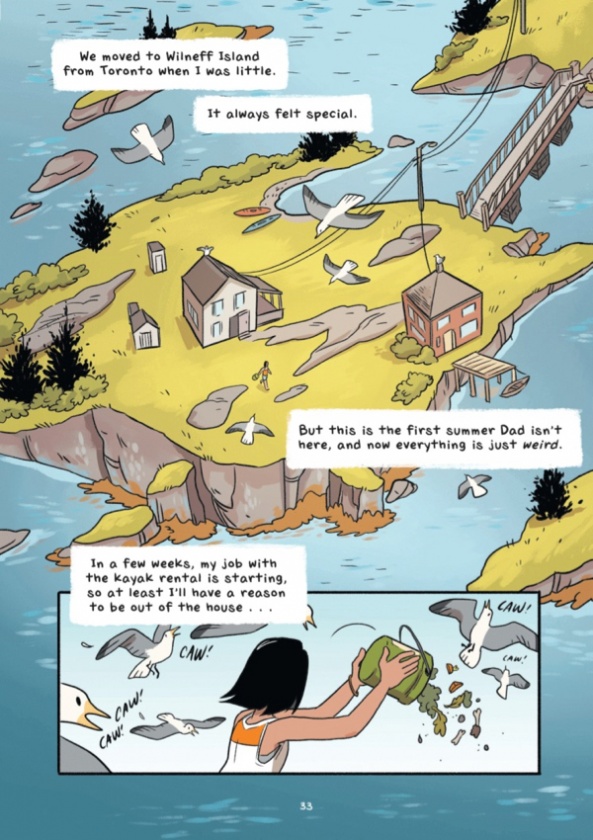 The story centers around a strong female protagonist. She’s a teenager, her name is Morgan, she’s graduating from high school next year and she’s got a plan: “To get off this island and move to the city, ANY CITY. To go to college. And to be gay, far away from this tiny town and everyone who’s known me since forever.”

Morgan is a master of compartmentalizing her emotions. One box is for childhood memories, when her life seemed idyllic and simple. Another box is for life at school and socializing with her friends. The third box is for life with her family, which is often overshadowed by her father’s conspicuous absence and her little brother’s perpetual grumpiness.

The fourth box – which she never actually mentions – is where she’s packed away her sexuality and the life she dreams of living. She hasn’t yet come out to her friends or family and she’s determined to keep it that way. Instead, she’s counting the days until she can leave while doing her best to blend in and be agreeable.

Morgan’s plan quickly unravels, however, after meets a keltie – a shapeshifting seal who can transform into a human being once every seven years. Morgan isn’t sure if she’s dreaming, so she figures, why not lean in for a kiss? From that moment on, everything escalates and gets way more complicated.

Kelsey – as the girl is known – doesn’t understand why Morgan won’t be her true self in front of other people, while Morgan desperately tries to keep their relationship secret. Morgan’s friends feel abandoned. Morgan’s little brother starts nosing around. And somehow they all need protect the island’s seal rookery from environmental calamity. 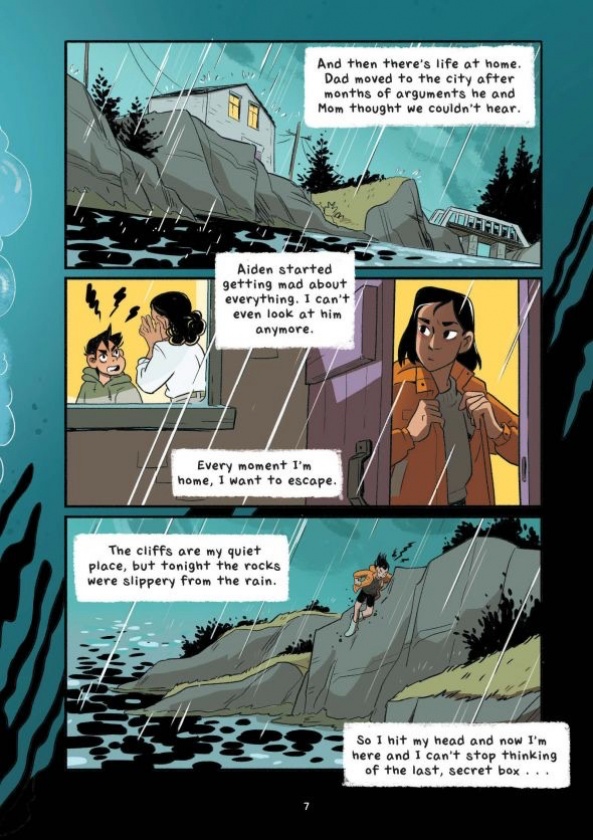 In a word, authenticity. The story comes from a place of lived experience and it comes through on every page. When Ostertag was a kid, she and her family spent summers on Nova Scotia’s Wilneff Island. Not coincidentally, a fictionalized version of that island is where the story takes place.

Ostertag’s settings aren’t particularly detailed, but her lingering affection for the island is palpable. Morgan may be counting the days until she can flee, but it’s also Kelsey’s home. With simple, carefully rendered details, Ostertag captures the feeling of what it’s like to spend your summer on a small backwater island, far from the rest of the world. Perhaps unsurprisingly, the romanticized ambience is much more closely aligned with Kelsey’s world view than it is with Morgan’s.

Ostertag’s art is wonderful, but her script works even better. For one, she navigates the narrative timeline perfectly. Flashbacks are well placed and she strikes an excellent balance between what the reader knows and what the characters know. We can often see what’s coming, even when Morgan can’t, but there are still some surprises and it never feels rote.

Ostertag also has a great ear for teen dialogue. After slipping off the rocks and sinking into the water for a dangerous length of time, Morgan thinks, “Mom’s gonna kill me if I have brain damage.” It’s funny, because it’s true. Morgan survived a treacherous situation, but she’s not out of the woods. She still has to deal with her mother.

Elsewhere, in a group text, Morgan’s friend Jules wants to get everyone’s opinion on which swimsuit she should buy. Their friend Serena chimes “red! I like the top,” which is immediately followed by, “WAIT i thought you were broke!!” Jules flatly responds, “i am but i also need to look hot.” Everyone totally gets it. No one argues and they move on. Text conversations in graphic novels can often be awkward or feel forced. Here, they are a great way to keep all of Morgan’s friends involved in the story, even as they don’t often see her and wonder what she’s up to. It shows us the social pressures Morgan is under without adding tangential scenes. 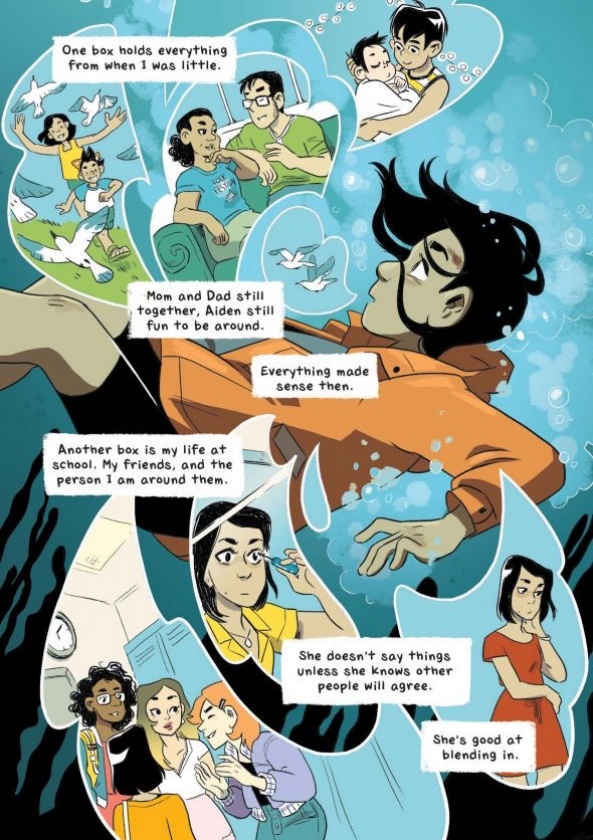 You can find “The Girl from the Sea” wherever books are sold, including Scholastic book fairs. You can also track down a copy through your local comic shop or use the Indie Bound Store Locator to find an independent bookstore near you. If ebooks are you thing, you can download a digital copy from your favorite online platform. Either way, this is a book you’ll want to come back to. 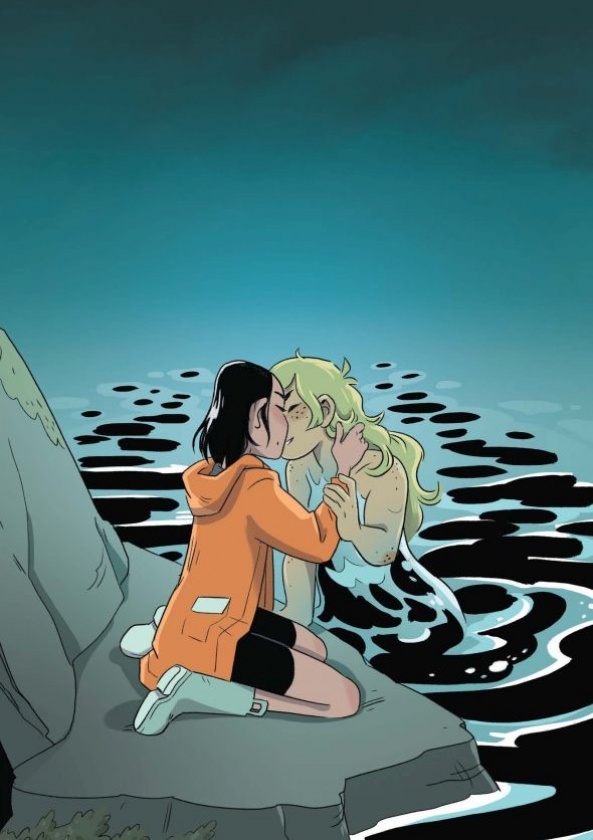 Why Should it be on Your Shelf?

Ostertag has described “The Girl from the Sea” as “a teen summer romance graphic novel with a little bit of magic.” Without its fantasy elements this story would not be the same. Nonetheless, it’s very well grounded. There’s nothing magical about Morgan’s inner struggles to live her authentic life. It’s confusing, painful, joyous, scary and uplifting. Very much like “real life.” Ostertag’s genius lies in combining the truth of lived experience with the romance, imagination and wonder of fantasy. 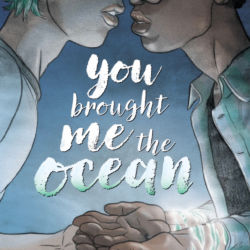 Bookshelf Basics: “You Brought Me the Ocean”

All-ages graphic novels are more diverse and prolific than ever. With so much great content out there – and more arriving every week – sifting through it all can be a daunting task. Whether you’re a parent, caregiver, teacher, librarian or young reader, Multiversity’s Bookshelf Basics is here to help. By highlighting a blend of […] 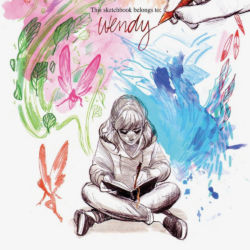 All-ages graphic novels are hotter than ever. With so much great content out there and more arriving each week, sifting through it all can be a daunting task. Whether you’re a parent, caregiver, teacher, librarian or young reader, Multiversity’s #BookshelfBasics is here to help. By highlighting a blend of newly released and classic all-ages books, […] 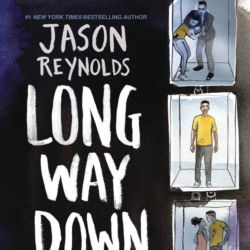 All-ages graphic novels are hotter than ever. With so much great content out there and more arriving every week, sifting through it all can be a daunting task. Whether you’re a parent, caregiver, teacher, librarian or young reader, Multiversity’s Bookshelf Basics is here to help. By highlighting a combination of newly released and classic all-ages […]