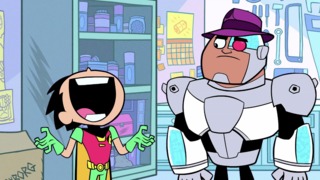 This week on Boomb Tube, Hulk and the Agents of SMASH fight The Mole Man, Ultimate Spider-Man fights The Sandman, and Teen Titans Go! has several capricious situations. Once again, Beware the Batman is on hiatus this week an- OH… oh… turns out Beware wasn’t just on hiatus last week. It got pulled. The same way Young Justice and Green Lantern did. I don’t know why the only Cape Cartoons that seem to succeed are the ones that feel the need to name their episode based on what villain they’ll be fighting in an almost checklist-like manner, but this will probably lead to a dearly missed absence in the Boomb Tube roster. Frick.

After last week’s shock twist in which Norman Osborn spent a whole episode probably pretending to be rehabilitated only to actually turn out to be a nice guy now, Ultimate Spider-Man continues this redemption subplot with The Sandman who I genuinely forgot appeared on this show before. After Spider-Man breaks the Android from another forgettable episode, setting Flint Marko free, SHIELD elects to rehabilitate Sandman as an Agent of SHIELD. All in all this should be a good idea, Osborn himself reverted into a good guy last episod- oh wait Sandman has a hella amount of psychological issues well let’s watch this play out. Sandman gets placed into an awful-looking containment suit and goes with Spider-Man to fight Swarm. Spidey allows Flint, who sounds a lot more like a teenager than the gruff roughneck Sandman has been in 99.99% of his portrayals, to get out of the suit to win but then witnesses Flint beating the swarm of robot bugs into submission. Spidey gets a worried look upon his face, the same one I have when I remember this show’s incarnation of Swarm is not an actual swarm of Nazi bees. What a waste.

Eventually Spidey and Sand-in-His-PantsMan move on over to Time Square where, in an effort to cater to me and twelve other people watching this show, Batroc the Leaper is causing a ruckus. Not only is he leaping amok, he actually has the following lines of dialogue delivered in an awful French dialect: “Oh I love to leap! This is me leaping!” Beautiful. Anyway, Sandman also savagely beats Batroc which is the breaking point for Spider-Man who, after a half-assed battle, calls upon Chekhov’s Android to consume Sandman and then vomit him back into the containment suit. 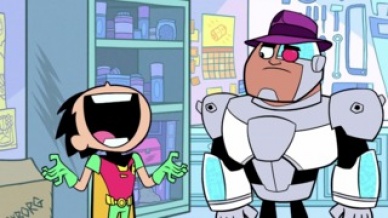 Teen Titans Go!, meanwhile, continued to be insane. Beast Boy and Cyborg learned how to use power moves off-screen and each one involves someone picking up the other teammate and throwing them at some bad guys. To be fair, that describes about every group attack I’ve read in a comic. Robin, the Dennis Reynolds of Teen Titans Go!, decides that he wants in on the Power Moves sensation too and begins to hog time with Cyborg, infuriating Beast Boy, the Charlie Kelly of the show. Cyborg is Mac, Raven is Dee, and Starfire is Frank. Anyway, when Cyborg decides that he wants to spend less time with Robin, Robin reveals his plan to fully merge with him by crawling his way into Cyborg’s body. It is as sensual as you’d think. Robin-Cyborg ends up fighting Beast Boy, desperate for his friend back, but Robin is finally expelled from Cyborg’s body which falls apart. The team then laughs as Robin falsely promises to never do this again as they go to get pizza or something while Cyborg’s dying shell lies twitching in the foreground, begging for help. I’m not even being an ass, that’s the final scene.

Hulk and The Agents of SMASH had yet another episode about a team of five Hulks that’s still somehow boring. At Vista Verde, the stupidly named town The Agents of SMASH operate out of, Hulk is being honored for his heroic duties and, I remind you, this is a show that’s first few episodes were literally about Hulk not being accepted and needing to fix his public image. But, like The Leader storyline that was built up and literally concluded on a miniature golf course, I doubt the writers really care. Vista Verde soon comes under attack by the monsters from Tremors, which causes Hulk to go underground to the Moloid kingdom where he’s prophesied to save them all. Elsewhere, Red Hulk and She-Hulk go gift-shopping.

Hulk ends up captured by whatever tremor creatures are attacking, and ends up webbed up near some Ridley Scott styled eggs with The Mole Man, who is surprisingly not voiced by a creepy Tom Kenny. Mole Man explains some stuff and everyone escapes to the surface where Hulk and his Agents fight the Alien Queen. They do. With insane lasers and their pet Dinosaur Devil. This show can get cool for thirty seconds at a time, occasionally. The Alien Tremor Queen is eventually defeated when she has a rock thrown on her. Really cathartic ending. The Hulks and Mole Man are celebrated by Vista Verde and their mayor, Stan Lee who at this point is genuinely tiring to see in cameos. What follows this is the scene where I know Agents of SMASH was messing with me. A little girl with a teddy bear comes up to the Hulk and thanks him for being such a hero. “No,” he says. “I’m not the hero, he is.” pointing to Mole Man who literally just sort of showed up. Then Hulk mumbles for a bit about a moral or something and ends the broadcast with his usual call signal which I just got. It’s “Hulk out.” like “Seacrest out.” I JUST got that it’s meant to be like “Hulking out.” Wow. I despise this show. 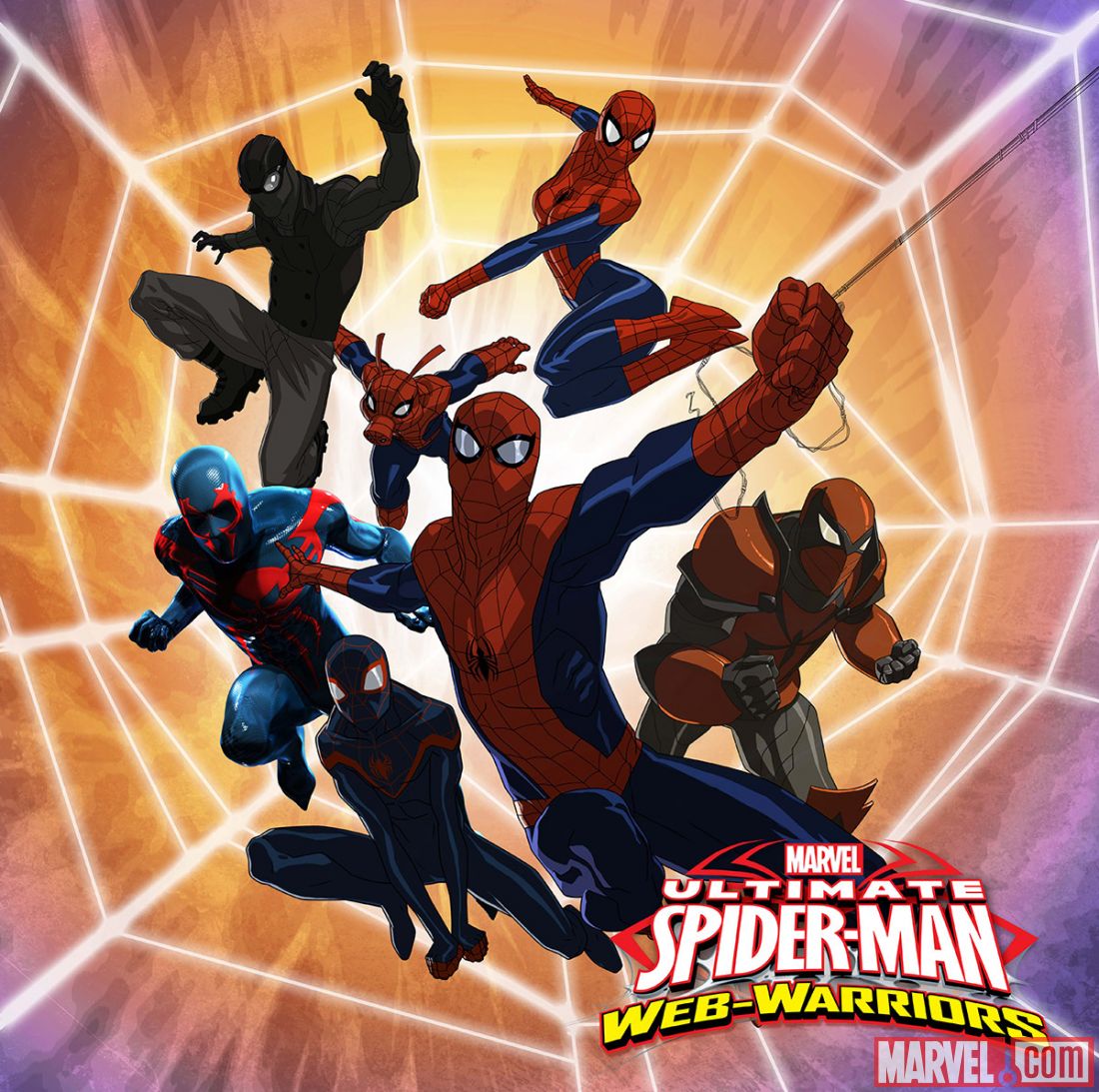 Welcome to Boomb Tube, Multiversity’s ongoing column regarding the world of Cape Cartoons. After a brief hiatus caused by my recent arrest, we’re back! Also back: Ultimate Spider-Man: Web Warriors. Check out our spoiler-filled recap below!Last time on Ultimate Spider-Man, Spider-Man beat up the Green Goblin again which impressed The Avengers enough to let him on their team. That’s great for Spider-Man, […] 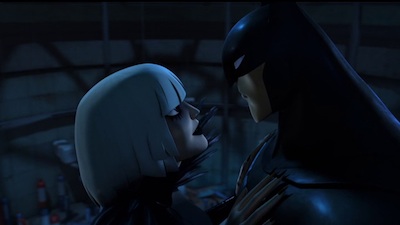 Boomb Tube Special Edition: Watching “Beware The Batman” at 2:30AM with a Small Child

Welcome to a very special edition of Boomb Tube, Multiveristy’s ongoing animation column dedicated to coverage of Cape Cartoons. It’s been a rough time for me lately, especially with some events that occurred at San Diego Comic-Con. Not only did did we fail to win an Eisner, but Marvel also announced that it’d be releasing […] 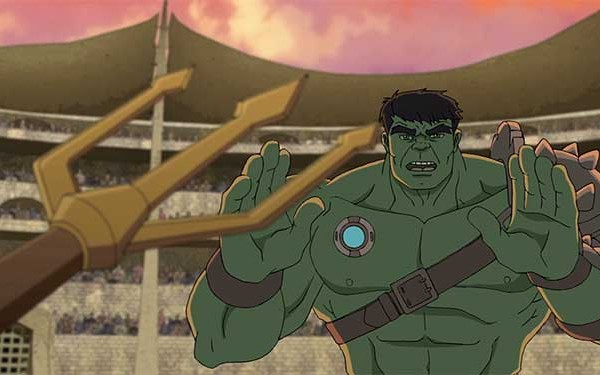 Welcome back to Boomb Tube, Multiversity’s weekly column detailing the current Cape Cartoons scene. We missed a column last week because Wikipedia listed there being another episode of Agents of Smash titled ‘It’s A Wonderful SMASH’ but apparently that just aired somewhere in the UK and I can’t find it online. Once again, Wikipedia and Agents […]