It’s that time again! Check out the following for a look at the Buffyverse book “Angel & Faith!” 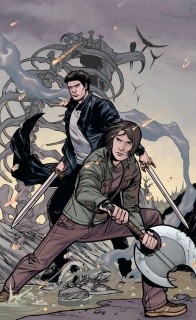 The expedition to Quor-Toth has taken an unplanned turn for Angel, Faith, Willow, and Connor. While they struggle to survive the horrors that surround them, they have also taken on a mission to stage a great escape–and not just for themselves! They must act fast, before the effect that this hell dimension is having on their thoughts and emotions overcomes them!

Man, Team A&F has it rough. This book just piles on the issues for all characters involved, and Quor’toth is no exception. In fact, the dimension where Angel’s son Connor grew up is full of danger around every corner and it’s pretty obvious why Connor might have had a few “issues” shall we say when he returned to Earth as a teenager. Everything from the demons that want to kill our heroes to the effect the dimension itself has on our heroes’ psyche paints a clear picture on how messed up it was in Connor’s head for most of that time.

It also helps illustrate something that Angel did for so long, and that was give the black and white of demon killing a helping of all the shades of gray that can come with that. Even though Connor was severely disturbed and Holtz was by all rights a bastard, they affected the people of Quor’toth in such a meaningful way that it caused a war between two factions: those who wanted to live up to the status quo, and those who would fight to change it for the better. But who’s to say that love and compassion, for instance, would WORK in a place as bleak as Quor’toth?

Unfortunately, among those who enjoy the status quo is The Old One who gave the dimension its name. Yep: an Old One. These guys really can’t catch a break.

Meanwhile, on Earth, Giles’ witchy family members have their own hands full dealing with the demons from the first arc, along with Angel’s old buddy the Whistler. It seems like Whistler is starting to resemble the Whistler we recognize from the original series as opposed to one that appeared to have been trying to restore balance by giving evil more power.

Also: Whistler is just a bit terrifying when he’s angry. Even though he looks like some god awful tourist most of the time, when he loses his temper, he can clearly do a lot of damage. It will definitely be interesting to see what this message he has for Angel means for the narrative between the various series’ in the “Buffyverse,” when they come together in the ultimate crossover to end Season Nine, presumably next year (provided that Issue #25 is still the end point for the two main series.)

The fight between the gang and Quor’toth Itself was certainly an epic one if a little on the short side. While those two descriptions might not necessarily go together, it was explosive bt somewhat abbreviated, as there might be a bigger problem coming from this fight: Dark Willow.

It’s an interesting twist to the Quor’toth problem. The dimension itself had been bringing out Angel’s, Faith’s and Connor’s darker sides, but Willow on the other hand, had seemed to be holding her own against any darkness, and in fact, it seemed like she might have been somewhat immune. But instead, hers was a slow burn that eventually just overwhelmed her and brought out the Black-Out Eyes. What could this mean for her and our titular heroes?

It seems pretty obvious at this point that Quor’toth, the being, exists merely to bring out Willow’s darkest part of her inner self, it would have been nice to see more of the fight itself though. I have to ask, however, what Quor’toth has to do with a piece of Giles’ soul. It’s hinted in the recap before the issue that there is a piece of his soul hiding somewhere in Quor’toth, but how? It makes sense to restore magic so he can bring him back anyway, but a soul being there doesn’t make a whole lot of sense, yet.