Family Reunion Round Four! Dark Willow vs. Quor’toth for all the marbles! Who wins? Who sticks around? Who dies? Who leaves? 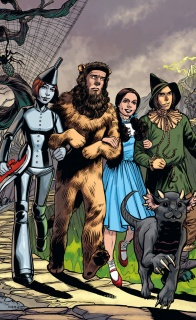 In Quor’toth, Angel, Faith, and Connor realize that their problems are only increasing the longer they are in this unpredictable hell dimension. As Willow fervently tapped into the dimension’s magic, she engaged a little too much darkness . . . Now, the crew has another danger to face: Dark Willow!

Quor’toth is a rough place. Just when you think you’re done with all the various ugly S&M Demons that want to see your insides on the outside, the Old One that the dimension is named after wakes up and wants your insides inside THEIR insides. That’s a lot of gruesome. But that’s par for the course when you’re Angel or Faith, let’s be honest.

This problem is exacerbated by the fact that the only person who can take down Quor’toth is none other than Dark Willow, who manifested after being exposed to all that dark energy that Angel, Faith, and Connor were absorbing, while Willow seemed to remain unaffected. Instead, the dark energy built up inside of her until it exploded like a dirty willow bomb, so to speak.

This caused a very serious issue for Angel, as he had to use a trump card he wouldn’t want to ever pull, and that is releasing HIS dark side to subdue Willow. That’s right, bumpy face Angel had to save the day, which was hinted at in the previous issue when Willow mentioned to him that being all bumpy faced might lead to a similar issue that he had over on Pylea.

Before he got the chance to save her, however, she was laying the proverbial smack down on The Old One known as Quor’toth, and nearly destroyed it, which not only speaks to the upper limits of her abilities, but may just make future! Willow, who appeared in the Fray/Buffy meet up in Season 8, that much more frightening if “Fray” is ever relaunched or if they go back to the future for whatever reason (sans De Lorean, of course). At this point it seems silly to build up this kind of power within her only to disregard future consequences for that power manifesting at some point.

My theory at this point is that her retrieving magic for our realm will profoundly corrupt her being and bring about Dark Willow permanently, which she will remain until Melaka’s timeline in “Fray.” Who knows, maybe that will be the first arc of a future ongoing “Fray” title.

Speaking of magic, the restoration of Giles’ soul is almost complete, with the rest of his soul only in one place. One wonders how Angel knows that, but knowing this franchise, the tooth thingy he’s wearing to collect the soul in the first place tells him how many pieces there are and in what place they’re at. That’s really convenient, considering that would make it magical and there’s no magic left.

But I’m probably looking too far into it. Who needs complete logic for a fantasy story like this?

I would be remiss if I didn’t mention how much character growth each character gained over this arc, and this series as a whole. Faith is really learning to trust Angel, which is something she’s never really been able to do since she was a child. The last arc with her father proved that her trust issues go all the way back to childhood. Angel’s bonding with Connor strengthened both characters, and Connor finally felt like a fully formed character, rather than a plot device/soulless antagonist. His messianic role to the Dingo People of Quor’toth helped his new personality resonate more than it would have if they just said he was a nice guy now, even if the Dingo People were a little cute to be from such a Hellish Dimension.

Finally, the last page of the issue was a doozy. Now that they’re in the home stretch of their quest, the slayers of London know that Angel and Faith are in fact “Angel and Faith,” which upset them to their very core, seeing as how Drusilla killed one of theirs after Angel and Faith let her go. This will certainly come to a head in the next arc as they’re looking for the rest of Giles’ soul, as well as Whistler and his Blunder Twins. There’s a lot that has to go on in the next few issues and I pray they can wrap it up neatly, especially when they’re likely going to be a crossover with “Buffy” and possibly “Spike” the upcoming “Willow” minis.

Anything to add, what did you think? What DO you think is going to happen? Let us know in the comments!