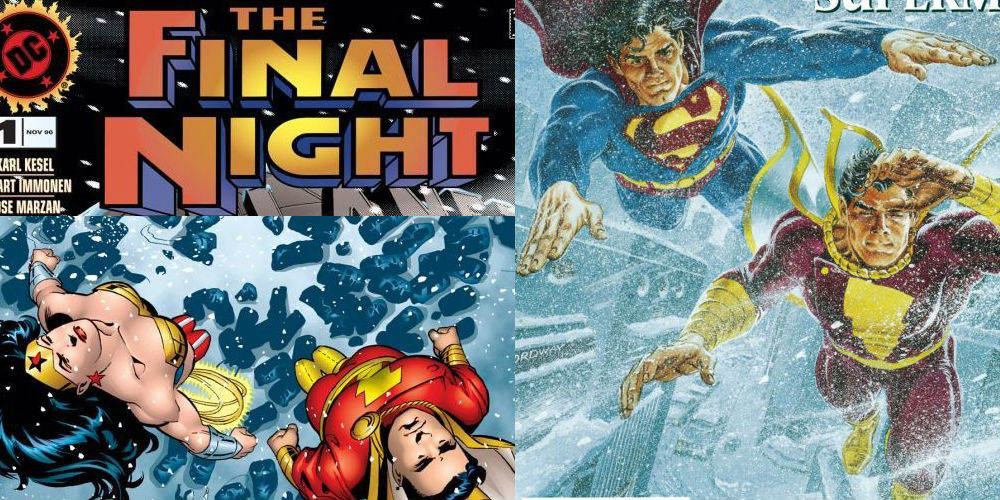 The first major crossover since “The Power of Shazam” started, ‘The Final Night’ is an anomaly among big crossover events, as there isn’t a villain at the core of it. The Earth’s sun is engulfed by some sort of naturally occurring ‘sun-eater’ which has wiped out lots of other civilizations before. There’s no negotiating, there’s no trickery, there’s just the (pardon the pun) cold truth that the sun is going away, and Earth won’t be far behind. And so, of course, the heroes must act. Let’s dig in. 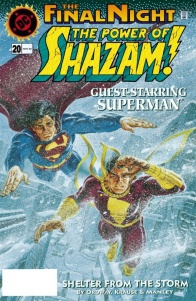 FINAL NIGHT tie-in issue! One city still shines in the darkness: Fawcett City. But only if the light-bringing, life-giving magic spell of the wizard Shazam will hold out! Unfortunately, it’s also the painful duty of Captain Marvel and the Man of Steel to keep desperate, panic-stricken mobs from flooding the already overcrowded city!

So, I tried to read this crossover like I did ‘War of the Gods,’ where I dug into each and every part. But, after three tries, I quickly gave up on that. Calling these ‘tie-ins’ is almost entirely false, as nothing really happens in these books that connect to the overall story. Now, maybe more of them did than I gave a chance to, but I read the first three (“Power of Shazam” is the first one, and is one of the most involved stories) and I read the two that listed Captain Marvel in it (“The Flash” and “Legion of Super-Heroes” issues, which just have him in the background), and there’s so little of the issues that have to do with anything big picture whatsoever.

That said, “The Power of Shazam” #20 is a really good issue, which works both as a piece of “The Final Night,” and as a piece of the overarching ongoing series. Ordway uses this issue to reconcile Mary and Freddie, as well as begin to show the differences in how each member of the Marvel family uses their powers. But more than that, this issue begins to sew a real friendship, or at least professional respect, between Superman and Captain Marvel. These two have been pitted against each other, both in actual, real life court and in the pages of comics, and its nice to see them have an interaction that isn’t some sort of macho postering. Also, Krause draws a sick Super-mullet.

As for “The Final Night” event itself, I found myself really impressed with it, for a few reasons. Aside from the aforementioned lack of villain, I really enjoyed the portrayal of Lex Luthor. He is as smarmy and sarcastic as ever, but also reveals a real streak of cowardice that modern Lex would never actually speak out loud. When he is suggested to go on the (likely) suicide mission to save Earth, he bellows “I did this to survive, don’t you get that?” It’s a really nice bit of dialogue from Karl Kesel, who overall did a fine job, tonally, with the series.

Stuart Immonen is the penciler on the mini, and you don’t need me to tell you much about how great he is. He does some really amazing work with a wide swath of characters. I especially dug his work with the Ray, both from a character design/action standpoint, and from the way that he, inker Jose Marzan Jr., and colorist Lee Loughridge use light and shadows on his costume. His Mister Miracle and Captain Atom, who both prominently feature in the first issue, are sights to behold. Now that he’s semi-retired, he should come over to DC and do a New Gods series. Just sayin’.

One of the nice things about this series, from a Shazam-centric viewpoint, is that we aren’t seeing folks deny his, or Mary or Freddie’s, place in the superhero pantheon. This feels like the first time when no one is giving him shit or doubting him. He also acts the part; he offers to be the one to go after Ferro when his ship is in danger, and generally acts as nobly as would be expected of a ‘major’ hero. It feels like a long time coming for Cap.

If ‘The Final Night’ is remembered for anything these days, it is that this is the beginning of the rehabilitation of Hal Jordan. Because I’m a huge Green Lantern fan, the other tie-in I read was the absolutely lovely “Parallax: Final Night” by Ron Marz and Mike McKone. The issue does an incredible job to not just contextualize where Hal was at that moment, but how he got there, and did it without doing a huge info-dump of an issue. Instead, Marz positions Hal in a series of vignettes that illustrate the various parts of his personality: his vengeance in an interaction with Hank Henshaw, his failed love life in a scene with Carol Farris, his neglected ‘normal’ life with Tom Kalmaku, etc.

And the final issue of the miniseries brings Hal back into the fold of heroes, reluctantly, and shows his ‘final’ sacrifice for the Earth. But the real heart of the entire series, and of the DCU at that time, is found in “Green Lantern” #81 (by Marz and Darryl Banks), which is the funeral of Hal Jordan. Even if the issue was trash, which is certainly isn’t, it features the first interaction (of very few) between my two favorite DC characters, Kyle Rayner and Jack Knight: 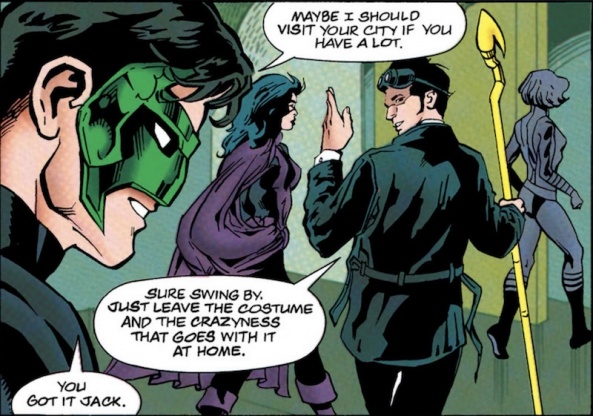 But this issue is just lovely. Hal’s corruption has since been retconned to be Parallax, the yellow fear entity, and not Hal himself, so a lot of the qualification of his ‘hero’ status has been removed over time. But even with those questions there, this is a powerful, moving issue, and a really satisfying miniseries.

But skip the tie-ins, please.

– There second tie in issue is a “Sovereign Seven” issue which, let me tell you, makes about as much sense as a comic written in an alien tongue I’ve never heard before. This is a totally forgotten series, in part because it was a creator owned series by Chris Claremont (!) and Dwayne Turner that hasn’t been referenced in DC continuity for a very long time. That’s because, and this is true, the final issue revealed that, psyche!, this didn’t actually happen, and it was all in a comic created by two brand new, never seen again characters. Seriously. I recommend this CBR piece about the series from last year.

– There was a lot of really great Immonen art in the miniseries itself, and it’s a pretty easy to digest series. I’d highly recommend picking it up (or reading it via the DC Universe app) and adding in the “Power of Shazam” issue, as well as the Parallax tie in and “Green Lantern” #81. “The Flash” tie-in was sort of good, too.

– Super-mullet was SO mullet-y. And this was in 1996, at least 5 years since peak mullet in the real world.

– Kyle Rayner is so great.

– I hope the next big crossover (“Genesis,” which I’m covering in September) will be a little less disjointed in the tie-ins. 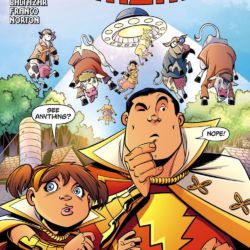 The Chronicles of Shazam: “Billy Batson and the Magic of Shazam” #17-21

Well, we’ve reached the end of “Billy Batson and the Magic of Shazam,” in what feels both a little rushed and also quite satisfying. No more dilly dallying, let’s get to it. Written by Art Baltazar and FrancoIllustrated by Mike NortonColored by Zac AtkinsonLettered by Travis LanhamClose encounters of the ghoulish kind! It’s up to […] 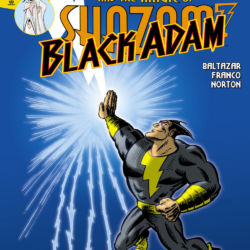 The Chronicles of Shazam: “Billy Batson and the Magic of Shazam” #13-16

“Billy Batson and the Magic of Shazam” brings in “Battlepug” and “Revival” artist Mike Norton for the remainder of its run, and Mike fits the tone of the book instantly. Written by Art Baltazar and FrancoIllustrated by Mike NortonColored by Zac AtkinsonLettered by Travis LanhamAll the area kids are in for a day of fun […] 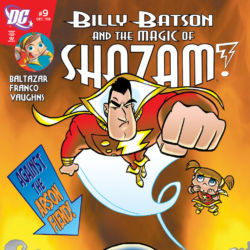 The Chronicles of Shazam: “Billy Batson and the Magic of Shazam” #9-12

The Magic is back! Art, Franco, and Byron Vaughns bring in a slew of Cap’s adversaries in this four issue arc of “Billy Batson and the Magic of Shazam.” Let’s say the magic word and enter the fray!Written by Art Baltazar and FrancoIllustrated by Byron VaughnsColored by David TanguayLettered by Travis LanhamCaptain Marvel’s newest enemy, […]