After a first year that very much acted as a status quo establishment, “The Powers of Shazam” focused on two-thirds of the ‘Big 3’ Captain Marvel villains: Mr. Mind and Dr. Sivana. We also get two solo Captain Marvel Jr. issues illustrated by Gil Kane, and an annual set in the distant future. Let’s dig in! 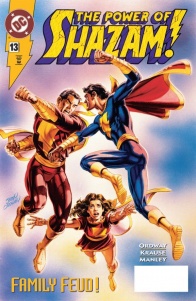 Captain Marvel and Captain Marvel Jr. come to blows in the inevitable showdown for possession of the power of Shazam–with Mary Marvel caught in the middle! Plus, a new menace crawls into Fawcett City.

While these issues somewhat cross into the mainline DCU, with appearances from Boom Tubes and S.T.A.R. Labs, this still feels like a very self-contained series, but one that is really intent on world building and carving out a solid corner of the DCU for itself. These eight issues eschew some of the ephemera from the first year: Dudley and Tawny are nowhere to be found, but we get to spend a lot of time with some of the side-characters, with less of a focus on Billy/Captain Marvel.

This isn’t a bad thing, as Billy is perhaps the least interesting ‘main’ character in the series, and so many of the other characters weren’t in the spotlight because, frankly, he was. So, we spend a lot of time with the wizard Shazam, Mary, and, especially, Freddie. As I mentioned in the opening, Freddie gets two solo issues illustrated by the legendary Gil Kane which help us to get inside his head a little bit. Mary is a bit more of an open book, and her story has less variables than Freddie’s does; between his injuries, his vendetta against Captain Nazi, and his unrequited love for Mary, there’s a lot going on under the skin for Freddie.

Kane’s art is timeless and lovely, and we get to see Freddie in New York, a nice change of pace for what is a very Fawcett-focused book. These issues were among my favorite that I read this week, and made me long for a Junior solo book that once existed but, due to yet another retcon, will likely never again. Plus, the Junior costume is gorgeous and, supposedly, the inspiration behind Elvis Presely’s hair and TCB lightning logo.

The main story for the bulk of these issues is one of Mr. Mind and his fellow worm creatures plotting an invasion of Earth. This sees Captain Marvel spend the bulk of the issues in space (with a cleverly redesigned costume, which also comes from Billy’s mind). Mr. Mind is a fun character, due to his ability to reshape a situation so effectively without lifting a finger/cilia, but when the action is set in space, with limited people to control, it falls a bit flat. The Mary-centric eighteenth issue, pencilled by regular inker Mike Manley, has a lot more fun Mr. Mind stuff, because it is set on Earth.

Even though it isn’t the best Mr. Mind usage, this arc is still really effective for a few reasons. It helps clear up some continuity messes (yes, Cap was still part of the JLI – it looks, basically, like only the “New Beginning” miniseries and the “Action Comics Weekly” arc are no longer canon), it gives each member of the Marvel family triumvirate some attention, and even gives the wizard Shazam some fun moments.

The sole annual for the book came out after #19’s Freddie-focused issue, and it was part of the year-long annuals event “Legends of the Dead Earth.” I love when DC used to do this, and instead of using the annuals for pointless stories or overstuffed nonsense, to tell unique stories in a unified manner. This issue features all new characters, except for (maybe) an ancient Billy, still guarding the Rock of Eternity. The story itself is a little too cute for my tastes (a character named Noir becomes the new Black Adam, the new Captain Marvel’ name is “Cecebeck,” etc), but it was a solid ‘Elseworlds’ type story that was fun enough.

– I marvel (pardon the pun) at the consistency of the art on this title. Krause did 13, 15, 16, and 17. Kane did 14 and 19. Manley, the normal inker, did 18 and the annual. There’s a really wonderful consistency to these pages that, along with Ordway’s covers and scripting, make for a very uniform reading experience.

– There’s a great bit about the wizard Shazam trying to fit in, so Billy basically takes him for a makeover, which involves him now having a skullet/pony tail combo, and rocking a thrift-store New Kids on the Block jacket.

– The extended Sivana family is getting a little play here, and I wonder if/when they’re going to play a major role in these stories.

– The continued World War II connections are a nice touch, but never really bog the book down in the past too much.

– I’ve finalized the schedule for the rest of this series, because we went from not enough issues to discuss to too many! But here’s the rest of the year’s installments:

After that, this column will hibernate until next summer, when I will attempt to get us up to ‘Flashpoint.’