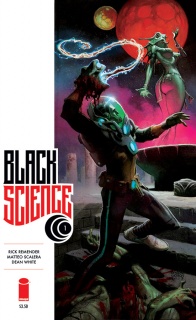 Black Science #1 ($3.50) – Rick Remender is coming back to creator-owned work with a bunch of Image projects and I am excited to finally see all of it. I never seem to think of Remender or list him among my top writers, but that’s admittedly a gross oversight on my part. It seems like no matter what he writes, even if I don’t think I like it at first, I always end up coming back around on it because he’s got such a unique perspective. I can tell you that I didn’t have that problem with “Black Science” though. I’m loving this one from its very first issue.

Five Ghosts #7 ($3.50) – Garry Brown stepped in for a cool swordplay heavy issue of “Five Ghosts”, but the main attraction is back now. Chris Mooneyham instills this book with so much sinister pulp adventure that I want to wallpaper my apartment with these pages.

Pretty Deadly #2 ($3.50) – I didn’t tear up my copy of issue #1. I gave it lots of tender kisses after reading it and then gently put it back in its bag & board. I don’t care what anyone says – this book is going to be a treasure.

Rat Queens #3 ($3.50) – I’ve really been bowled over by the amount of pure fun I’ve had with Kurtis Wiebe and Roc Upchurch’s “Rat Queens.” There’s not a character that I don’t like. 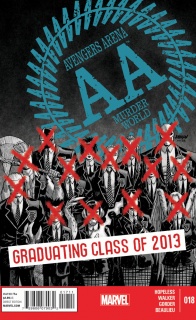 Black Science #1 ($3.50) – I can promise you: even if you don’t like the story, you’ll love the art. Matteo Scalera + Dean White = laser show. The good news is, the story is a fascinating, engaging read that promises to build to more. BUY BUY BUY!

Avengers Arena #18 ($2.99) – What can I say but all you people who wanted this book dead are now getting their wish. Jokes on you though because this book rules and Avengers Undercover is coming soon! In yo face!

Sledgehammer ’44: Lightning War #1 ($3.50) – Oh Sledgie, how I missed you. Looking forward to what’s next here, plus, Laurence Campbell. I probably should have just said “Laurence Campbell.” 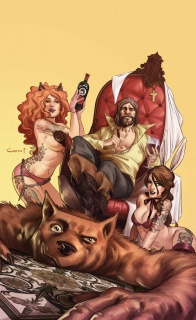 Bad Dog #5 ($2.99) – This is my most important release this week. I can’t believe this book is back and I couldn’t be more thrilled to see it on the list of things coming out. I have missed this book like nobody’s business!

Black Science #1 ($3.50) – This is going to be a HUGE release this week, and it is totally justified. One of the most exciting books of the week, that’s for sure, and it is exciting to see Remender return to the world of the creator-owned and let loose a little bit. Having Matteo Scalera along for the ride just sweetens the pot.

Pretty Deadly #2 ($3.50) – I loved the first issue unabashedly! Can not wait to see what Kelly, Emma and Jordie have cooked up for the next installment.

Nova #100 ($4.99) – I’ve been very pleasantly surprised by Nova since it returned, and I am actually looking forward to what Gerry Duggan will bring to the book quite a bit. It saddens me a little that the series still hasn’t found a stable creative team, but heck, with the line-up #100 has it looks like it’ll be quite an anniversary regardless. 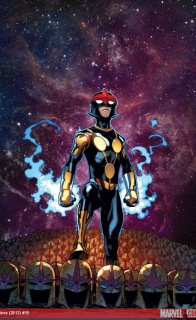 Nova #10 ($4.99) – “Nova”‘s been pretty great at picking up the slack of the dopey teen superhero schtick in a universe without Peter Parker, but what makes this top billing is because Yale Stewart is drawing stuff in this! Go support a great artist.

Pretty Deadly #2 ($3.99) – The first issue knocked it out of the park so I am really looking forward to this one.

Infinity #6 ($5.99) – Marvel’s best event in years wraps up in (hopefully) a conclusion that sticks the landing. With a price tag like that, it had better. 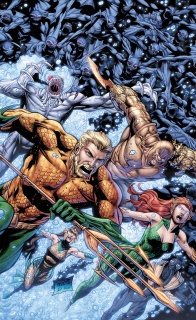 Black Science #1 ($3.50) I love hard sci-fi, and who better to give it to me than the man behind “Fear Agent.” Matteo Scalera has quickly become one of my favorite artists, and any book colored by Dean White is pretty much an instant buy for me anyway.

Aquaman #25 ($2.99) It may never have reached the heights of his “Green Lantern” run, but Geoff Johns work on Aquaman has done wonders for the character’s fan perception. It’s certainly a bit sad to see his run end, but Jeff Parker is a fantastic follow up. The fact that Johns plans to use this issue to set up a future plot lines for Mr. Curry in “Justice League” is also exciting, considering ‘Throne of Atlantis’ is arguably the best arc of the series to date.

Wolverine and the X-Men Annual #1 ($4.99) Kubark! It’s been over a year since Kid Gladiator returned to space at the end of AvX, and he’s been sorely missed from the pages of “Wolverine and the X-Men.” Here’s hoping this issue, drawn by the spectacular Nick Bradshaw, focuses more on what the pint-sized conquerer has been up to in the interim, rather than getting bogged down in Infinity tie-in nonsense.

Superior Spider-Man #22 ($3.99) I’m finally caught up on “Superior” and boy am I loving this book. One year in, the delightfully twisted take on a semi-heroic Doc Ock still has legs to stand on. This issue marks the start of a new arc featuring the Flash Thompson Venom, and should be a great place to jump in.

Pretty Deadly #2 ($3.50) Guys, I gushed over the first issue, so of course I’m going to recommend the second. I for one can’t wait to see more of this world that DeConnick and Rios have made for us. 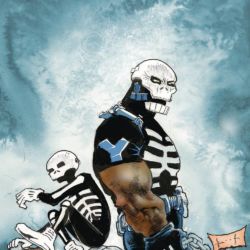 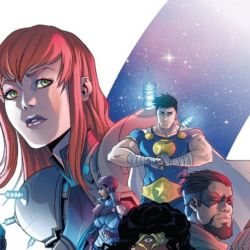 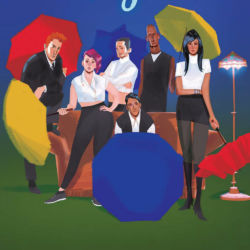