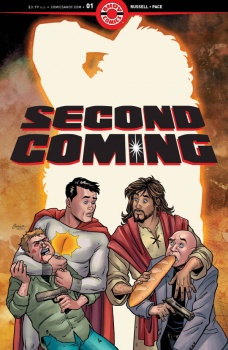 “Second Coming” #1 ($3.99) – The book that was too hot for DC to touch ends up at something called “AHOY Comics.” Mark Russell’s signature socio-political injections are surely going to be well-represented in a story where Jesus Christ himself comes back to Earth to find his message corrupted. I’m not surprised DC chickened out on this one, but I’m happy to support it somewhere else.

“Ghosted in L.A.” #1 ($3.99) – Speaking of supporting someone’s work elsewhere besides the Big Two, after reading about the struggles Sina Grace had with Marvel over his recent “Iceman” run, I’m even more thrilled to support his latest creator-owned work at Boom! Studios.

“Batman: Universe” #1 ($4.99) – This is the beginning of the proper floppy release of Brian Michael Bendis and Nick Derington’s Walmart Batman story. It is, by far, the best of the Walmart comics and I would go so far as to say it’s the best Batman story I’ve read since Snyder and Capullo’s run ended, though I could be forgetting something. Anyway, it would be a shame for even cursory Batman fans to overlook this one, as Bendis and Derington blend all aspects of Batman together for a fun story – the dark and the corny. 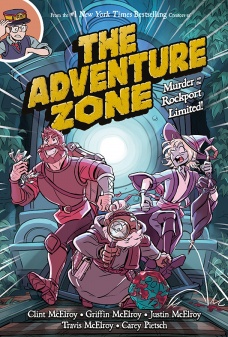 “The Adventure Zone: Murder on the Rockport Limited!” ($29.99)— It seems First Second plans on releasing a new installment of “The Adventure Zone” annually. For those unfamiliar with the series, The Adventure Zone is a podcast of the McElroy family (Clint and his three sons, Justin, Travis, and Griffin) playing a tabletop roleplaying game. Last year, First Second kicked off an adaptation of the podcast written by the McElroys and illustrated by “adopted daughter” Carey Pietsch. The book, ‘Here There Be Gerblins’ did pretty damn well, becoming the first graphic novel to top the New York Times’s Trade Fiction Best-Seller list. Now ‘Murder on the Rockport Limited!’ is about to come out and ‘Petals to the Metal’ is scheduled for July next year. It appears Pietsch is going to be very busy with “Adventure Zone” adaptations for the foreseeable future, which must be good news for The Adventure Zone podcast fan Brian Salvatore.

“Black Hammer / Justice League: Hammer of Justice!” #1 ($3.99)— I never thought I’d recommend a company crossover, or really any crossover where the characters don’t explicitly exist in the same universe, but here we are. Still, “Black Hammer” is one of the few titles that could make it work, especially given the revelations in “Black Hammer: Age of Doom” #6–7. This is such an unnatural fit for me. I’ve never clicked with Marvel or DC’s superhero comics, but at the same time, Jeff Lemire and Dean Ormston’s inherently meta “Black Hammer” is in the rather unlikely position to do something genuinely bizarre with the concept without breaking the world building. In fact, it may actually enhance it. 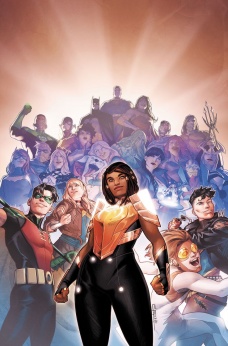 “Naomi” #6 ($3.99) – I’ll just say it: “Naomi” in my opinion is the best book DC Comics is publishing. It’s absolutely gorgeous, and while it has been spread out and decompressed, it’s just been honest (and also very comic book). This is an updated origin for 2019, and just feels like how someone who’s life hasn’t felt special would react if all of a sudden the magic that had always been there was revealed. I have shed tears over several issues of this comic, and look forward to crying after this issue while having to wait for the second season of this book.

“Young Justice #7 ($3.99) – So I have two Wonder Comics books on this list. Yeah I know. “Young Justice” has been super fun, albeit its decompression has not always served it in the way “Naomi”‘s has. Still, Bendis playing with the DC Multiverse for the first time and bringing David Lafuente and Dan Hipp along? Yeah this I gotta see.

“War of the Realms Omega” #1 ($4.99) – So the rest of the Marvel Universe has already moved on to “House of X” and “Powers of X,” the announcement of which overshadowed this event’s existence. Which is a shame because Russell Dauterman gave it all for 6 gorgeous issues of a Marvel event. When was the last time one artist drew an entire event without delays? Anyway, there were a few fun developments at the end of #6 that need to be fleshed out, hence my excitement for this.

“Second Coming” #1 ($3.99) – Jesus and a Superman analogue in the same comic by the guy that wrote God is Disappointed in You? Yeah I’ve been hooked since the Vertigo announcement. Mark Russell is a blessing and this has been one of my most looked forward to books for some time. 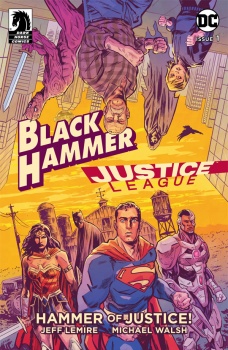 “Black Hammer/Justice League: Hammer of Justice” #1 ($3.99) – I’m a sucker for a good crossover. This one has a little something for everyone.

“Ghosted in LA” #1 ($3.99) – Just when you think your roommate situation is crazy . . . how about having dead roommates? I can’t think of a better writer for this series than Sina Grace, a man who knows how to mix wit and humor with heartfelt emotion.

“Shades of Magic” #7 ($3.99) – Each arc in this series, based on V.E. Schwab’s novel trilogy, just keeps getting better and better. Will Prince Maxim survive the Night of Knives?

“Care Bears Unlock the Magic” #1 ($3.99) – I’m adding this solely for my 80s girl child nostalgia. I thoroughly enjoyed Matthew Erman’s “Long Lost” series, and it will be fun to see him make the shift from horror to bright and shiny. “Corpus” editor and writer Nadia Shammas is also a treat to have on the book; I enjoyed her contributions to the anthology and can’t wait for her YA graphic novel “Squire” in 2021. 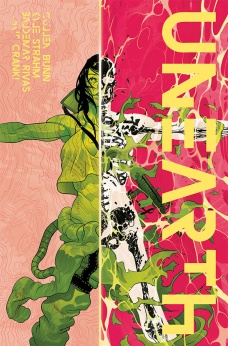 “Black Hammer/Justice League” #1 (3.99) – Not a crossover I needed or really wanted but I will take any bit of more “Black Hammer” I can get. The most interesting part of the DC crossover is that we get to see artist Michael Walsh draw Batman which I am all for.

“Unearth” #1 ($3.99) – Cullen Bunn and Kyle Strahm know how to make a horror comic, so I am already on board. The idea of a disease spreading and originating from a cave with supernatural elements sounds like the perfect mix of Bunn and Strahm’s work. Also don’t be sleeping on Baldemar Rivas’s art.

“Bitter Root Red Summer Special” #1(3.99) “Bitter Root” is a fantastic series and to get an issue that fleshes out the characters and world more is even all I could ask for. It is broken up into six short stories with an impressive list of artists doing work. This is your chance to pick this up and catch up on the first arc as well.

“Zorro Masters: Alex Toth” #1 (3.99) I don’t have a whole lot of experience with Zorro but I have wanted to experience more Toth work. I have loved everything I have read and seen of Toth’s work so this seems like a good chance to get some Zorro/Toth experiences all in one shot. 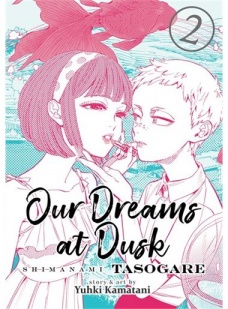 “Our Dreams at Dusk (Shimanami Tasogare),” volume 2 ($12.99) – Combining emotional slice-of-life drama with a small amount of magical realism, I really enjoyed the first volume about this diverse group of LGBT people forming a community. Plus, it’s a short series for a manga: only four volumes total!

“She Could Fly: The Lost Pilot” #4 ($3.99) – I recently caught up with this series, and Cantwell has really grown into writing comics over the course of the book. With what is probably the most accurate and affecting depiction of OCD in fiction right now, every issue is something to celebrate.