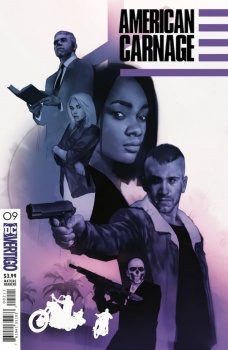 “American Carnage” #9 ($3.99) – If you have the money for just one comic book this week, make it “American Carnage.” If you haven’t read any of “American Carnage” yet, then that wouldn’t make any sense – this is the last issue! Whatever you do, make sure not to miss Bryan Hill & Leandro Fernandez’s masterful exploration of a man caught in the crossfire of federal law enforcement and white supremacy. It’s probably going to be remembered as the last great Vertigo book, I’d guess.

“Batman: Last Knight on Earth” #2 ($5.99) – Scott Snyder and Greg Capullo have told you that this is not only their last Batman story (yeah, sure), but also that it is the last Batman story. What I didn’t expect, and was totally delighted to find, is that this isn’t just a Batman story, but a DCU story. All the big guns show up to this party, so more than just Batman’s final case, this feels like it could be the DCU’s last stand against a big threat. It’s so much more than you think it is.

“The Green Lantern Annual” #1 ($4.99) – “A guest appearance by the strangest lantern of all”? I have about a half dozen names floating in my head right now, and with Grant Morrison at the wheel it’s quite likely that it’s someone I’m not thinking of – or even someone entirely new! Giuseppe Camuncoli is here for this one, and his spot duty here and there at DC since Rebirth began has been some of the best work of his career.

“Powers of X” #1 ($5.99) – Damn, I guess comics really aren’t going to be cheap anymore. Well, if “Powers of X” is as jam-packed with ideas and supplemental content that’s additive to the story like “House of X” was, you’ll be left with a toothsome read that is more than worth the money. Jonathan Hickman has never not given me my money’s worth. 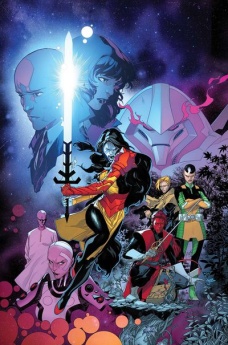 “Death’s Head” #1 ($3.99) – The other debut I’m super excited about from Marvel this week. Tini Howard is fast becoming one of my favorite writers, and with her and Kei Zama telling a story about the anxiety of obsolescence, well, how can you not?

“Justice League Dark Annual” #1 ($4.99) – And not to make it a completely Marvel week, but also to acknowledge this is a typical DC fifth Wednesday, I’ll be grabbing this “JLD” annual co-written by Ram V, who is also doing amazing creator-owned work and is starting to get some Big 2 issues here and there! 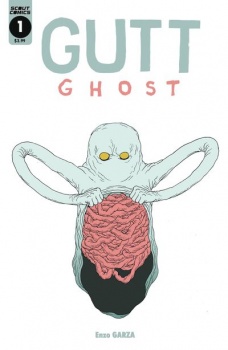 “Powers of X” #1($5.99) – A week of sure bets for me. Last week Hickman dropped “House of X” #1 and I thought it was going to be good and turns out it was fucking great. He returns this week with R. B. Silva for “Powers of X.” Much like his “Avengers/New Avengers” back and forth run I think both series will play off each other while still providing their own great stories. It is Hickman, I am in.

“Manor Black” #1 ($3.99) – Cullen Bunn and Tyler Crook, the team behind “Harrow County” joining forces again with Brian Hurtt thrown into the mix. Sounds like another win-win. Not enough can be said about “Harrow County.” The mood, the characters, the lore. It was all fantastic. “Manor Black” has a lot to live up to but if anyone can it is this team.

“Gutt Ghost: Till We Meet Again” #1 ($3.99) A solo joint from indie creator, Enzo Garza, “Gutt Ghost” follows a ghost around doing every day shit. I got the self published works Enzo put out over the past couple years and they are so much fun. I am really excited to pick up the Scout Comics release and hopefully see more from Enzo. 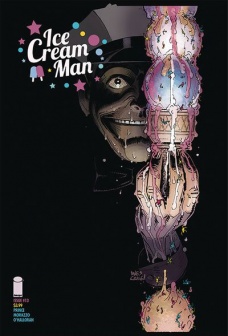 “Ice Cream Man” #13 ($3.99) – Just go look at that Wes Craig variant cover. That sums up the tone of this series better than any description I could give. It’s terror dipped in sweetness and topped with chocolate sprinkles.

“Sabrina the Teenage Witch” #4 ($3.99) – I just caught up on this series a few weeks ago and if there is any comic that is summer beach reading in a nutshell, this is it. Fresh and fun with just the right amount of horror. 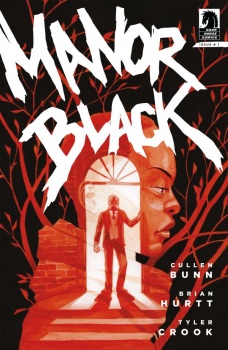 “Manor Black” #1 ($3.99)— Considering how much I’ve enjoyed previous collaborations from Cullen Bunn, Brian Hurtt, and Tyler Crook, I’d be an utter fool if I missed “Manor Black.” I’m so ready for this. Can’t say much more about it, though. I haven’t had the opportunity to read it yet.

“Paper Girls” #30 ($4.99)— A double-sized finale; an awesome way to bookend a series that kicked off with a double-sized #1. I’ve been waiting for the last issue before starting the final arc, so this’ll be a good week of reading for me. Of course, while this is it for “Paper Girls” in comics, there’s going to be a Paper Girls TV show on Amazon.