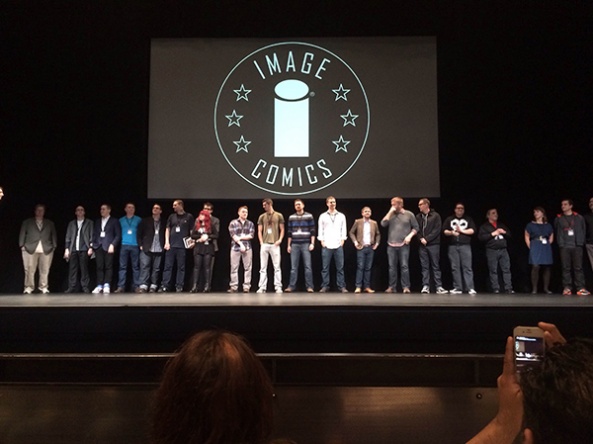 This past Thursday, Image Comics let loose a horde of exciting announcements and teasers from industry heavy-hitters and newcomers alike at their annual Image Expo in San Francisco. During the keynote speech, Image publisher Eric Stephenson announced 16 new titles such as “Nameless“, “The Great Beyond“, and “Low” as well as revealing the return of old favorites such as “Casanova” and “Tech Jacket“. However, after the virtual dust settled, fans began asking a question about the nature of the Expo – a big, important question that is indicative of the ongoing situation in comics making: “Where’s the diversity?”

Though the discussion of diversity in comics (both in character representation and creators) has been going for as long as comics themselves, I feel we’re headed in a promising direction and Image Comics is a good way to get there.

Looking at the above snapshot, we see a whole lot of men, two women and not one of them is apparently a person of color – it actually looks like the opposite of diverse. Image, often thought as a bastion of the cutting edge in comics, earned plenty of criticism by selecting a lineup that was primarily white male creators. Since their last Expo about half a year ago, Image has pulled out the stops innovating their business model by providing DRM-free, multi-format digital downloads complete with the recently-announced Dropbox integration for readers – so why doesn’t that forward-thinking attitude apply to how they pick their creators? The message many people got was that you have to be an already established, white, male, probably cisgendered individual to be published by Image Comics, and I admit that the numbers kind of back that up.

Thanks to the number crunching of Tim Hanley, if you include editors, Image Comics employs 4-6% less women than DC and Marvel on their creative teams (8% to the Big 2’s 12-16%) with the word still being out the numbers for POC (People of Color) and GSD (Gender & Sexually Diverse) creators. It seems like Image received a whole lot of unintended publicity for not considering a diverse creator lineup as a keynote priority. Since they’ve been widely viewed as the golden child in comics publishing for the last 3 years or so, it’s alarming to see these accusations brought to their doorstep.

So, where is the diversity? It’s a legitimate question, but who should it be directed toward? Perhaps we should be asking it to everyone, ourselves included.

While the lineup is disconcerting, shaking the blame stick at any one entity for a global problem isn’t the solution. The current climate for professionally creating any kind of media has a problem with a lack of diversity – book publishing, filmmaking, music recording, anything. You name it, they have more men than women, more white folks than POC folks, more cisgendered people than GSD people being represented – and sadly comics are currently no different. Unlike most industries, however, the comic world is relatively small and I believe it can change; and the platform Image provides is exactly the kind of tool we need to get it done. Furthermore I think we, the readers, have a unique opportunity to make this industry into a sort of pioneer – proof people are willing to support diverse content by diverse creators.

Unlike publishing giants Marvel and DC, whose creative teams are paid tiered rates that aren’t influenced by single issue sales figures – every time an Image title is purchased, money is put into the pockets of the creators. This does mean that less successful books generate less income for the creators, but it also means that runaway successes generate more  – it’s the fairest publishing platform I’ve seen at such a large scale. For the most part, Image doesn’t seek out creators for specific titles, but depends on people to see them as an ideal publisher to publish their own work and they’re devoted to hiring solely on the merits of quality alone. They own nothing they publish, with creators retaining all rights.  The reason that Image is considered an “indie” publisher is because it’s “independent” from larger corporations that aim to control any content made by the hired creative teams – the model that DC and Marvel follow.  With this in mind, is it okay to suggest that Image Comics, as a company, needs to step up their game in terms of pursuing more diverse creative teams?

Yeah, I think it is.

Image has grown up. Originally founded in 1992 as a way for creators to not give up the copyrights to the characters they made, Image Comics published some of the best-selling comics ever, but much of the content wasn’t notably distinct. They now thrive off of the new, strange, and unique and it’s within the scope of their business model to, as a publishing company, encourage creators from different backgrounds to pitch. People who have lived different lives with different social contexts are arguably more likely to produce different work – and that’s what we look to Image Comics for now. They have some responsibility for the expectation of quality we have for them, and finding creators from diverse walks of life could be a great way to keep content fresh.

However, blaming Image isn’t productive or necessary. They’re a very small company that likely doesn’t have a large budget to fly creators into San Francisco, put them up in a hotel, and feed them unless that person will draw in the crowd with signings and panels. So what we saw was a lineup of already established creators living in the United States who have probably worked with Image before – but what was announced was way more than that. Fábio Moon, Gabriel Bá, Leila del Duca, Valentine De Landro, Xurxo Penalta, Marian Churchland, Emma Ríos, Hwei Lim, Jordie Bellaire, and Khary Randolph are all creators attached to newly announced books that could easily be considered diverse compared to the guest list. Just because they weren’t physically there to greet the crowd doesn’t mean they aren’t important, so don’t forget them. A single snapshot doesn’t display a whole truth, it just serves to give context as part of one.

One such picture, posted a few days after the Expo, features a lineup of the Image staff behind the scenes. Unlike the previous one, the below snapshot sends the message that Image Comics does consider diversity an important pursuit, at least with their own staff. 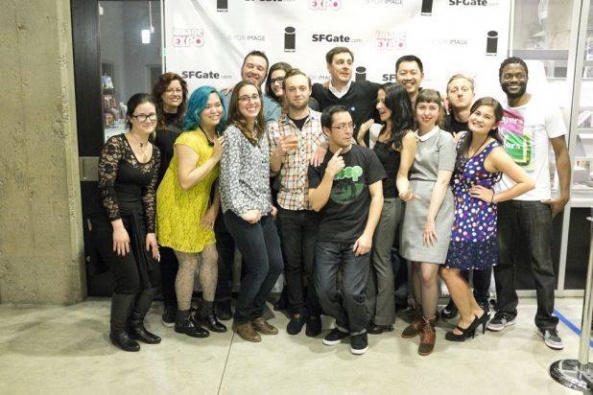 So does all this mean that Image should begin adapting their standards to judge work based off the creators’ background? Absolutely not – but it doesn’t mean they have to be neutral about it. Image, for all we know, is actively pursuing work by more diverse creative teams, but haven’t found the right project or project yet. Like any entity, they have a hand in how others view them, their “image” if you will, through advertising and PR. Though minimal, Image’s ads are thoughtful and creator-oriented, only appearing at the very end of an issue and often featuring a creator. These ads are how Image brands itself alongside it’s creators and there lies an opportunity to show us some different faces.

So how do we, the audience, help address this? It’s actually pretty easy in practice. Buy books made by female-identified folks, people of color, members of the GSD community and buy them for your friends. I suggest “Rat Queens” by Kurtis J. Wiebe and Roc Upchruch, “Pretty Deadly” by Kelly Sue Deconnick, Emma Ríos, and Jordie Bellaire, “Zero” by Ales Kot and Morgan Jeske, “Rocket Girl” by Brandon Montclare and Amy Reeder, “Saga” by Brian K. Vaughan and Fiona Staples and newly announced books such as “8HOUSE” by Brandon Graham, Marian Churchland, Emma Ríos, Xurxo Penalta, and Hwei Lim and “Bitch Planet” by Kelly Sue Deconnick and Valentine DeLandro – all Image titles with at least one creator who falls into one of the diversity qualifiers.

If you want more books by diverse creators, they need to pitch more books, and if you want more diverse creators to feel comfortable pitching, support them however you can. Back their projects on Kickstarter, buy their mini-comics at conventions, and help them get their name out there by actively seeking out new creators and advocate often for them. It’s time we take ownership of our demands of change by doing what we can to make it happen. It’ll be slow since big change moves in gradually, but awareness of these issues starts the changes we’re looking for in our beloved world of comics. 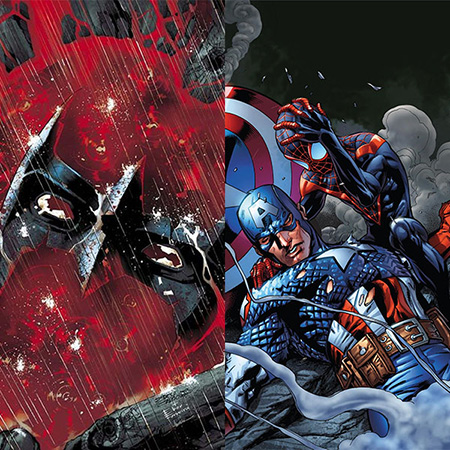 Article originally written by Zachary ClementeHave you seen the cover for issue 30 of “Nightwing” in the April solicitations for DC? Or maybe the cover of the recently released 4th issue of “Cataclysm: The Ultimates’ Last Stand”? I have and I think it’s time we had a chat about the use of character death in […] 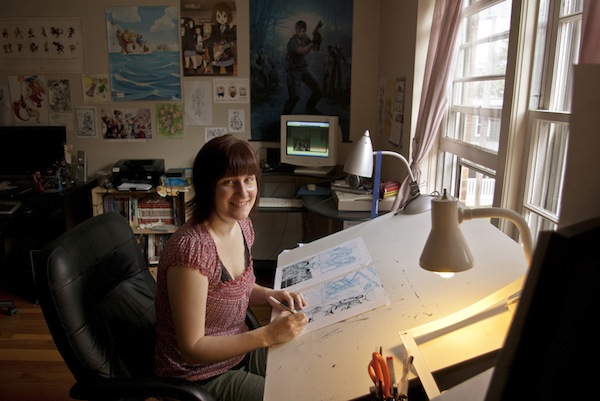 Article originally written by Zachary ClementeWelcome to the first issue of Cross-Canon, a new bi-weekly column at Multiversity that will focus on casting a wider gaze at the world of comics by discussing the current climate of comics as a creative space, addressing current events, and feature trends. Part of this is incorporating interviews with […]