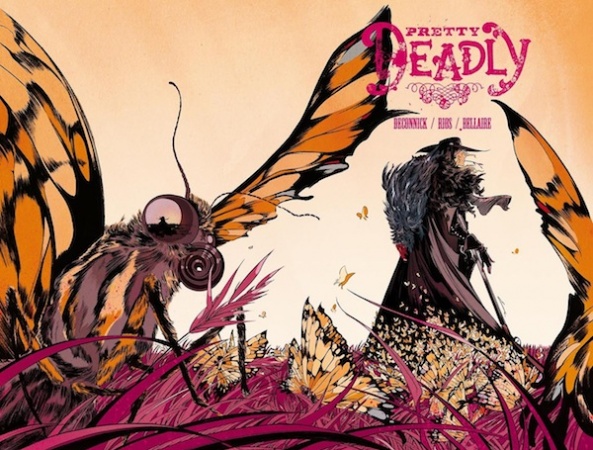 “Pretty Deadly” is a book I’ve been looking forward to for a long time. A looooong time. So long, that I’m not even going to bother and try and find every instance I’ve written somewhere on this site about how excited I am for this book — you’ll just have to take my word for it.

(Ok, well, you can at least see this and this from “Pretty Deadly Day” back in August.)

With that said, every chance I get to promote and write about the book, I take. We’ve already run a review, but a while ago I pitched the idea to Kelly Sue and Emma to do a soundtrack to go along with the day of the release. What I got back was a 1,227 song Spotify playlist from Emma (running over 63 hours) with the blessing to pick and choose as I wish from this list. It’s a massive list of albums and inspiring music, but I picked my eight favorite pieces and book-ended them together for our new Pretty Deadly Mixtape, running at just about 40 minutes — more than enough time for you to read the issue, read the backmatter, and re-read the issue again slower and more carefully to really soak in the fantastic piece of art that Kelly Sue, Emma, Jordie et al have put together.

Now’s your opportunity to hear it like we do. Possibly. Maybe.

As a side-note, it was never my intention to create a mix that was so… drone-y. Like, if ever an accidental ambient playlist was made, this would be it. But ultimately I do think it works in tune with a lot of what you’ll find within “Pretty Deadly”; as much as these tracks are soundscapes, you can see in the artwork in what ways Emma was influenced in terms of spacing and structure in some of the more grandiose and less intimate moments of the book. After all, all of these tracks except the top and the bottom come from her playlist.

So, without further ado…

Out of this entire playlist, you will only find two instances of music that I’ve picked outside of the initial playlist, and both instances find me utilizing the band Murder By Death. Why? Well, the simple answer is that MBD already utilizes that Southern Western-inspired twang that I want to see in this soundtrack; their albums all act as soundtracks or concept albums to Westerns that don’t exist — yet. (I’d love to see “Who Will Survive…” become a film, personally.)

So for this soundtrack, I thought the only way to start off a Western-inspired soundtrack was to have some music from classic composer Enni Morricone — and what better way to slap on at least a semblance of originality by using a piece of music inspired by Ennio Morricone that wasn’t already attached to any one film or piece of work? And the extended version of the song that appeared on “Red of Tooth and Claw” is so wonderfully done that I think it works perfectly as the introduction to “Pretty Deadly” — perhaps more in the case of the eventual full trade than just the single issue, but I think it at least sets the proper tone.

We’ll return to Murder By Death once again before we’re done.

Nick Cave and Warren Ellis – Last Ride Back to KC

Going into this mix I knew I needed something from Nick Cave and Warren Ellis (not that Warren Ellis ha ha everyone makes that joke ha ha!) on the playlist, it was just a question of which film. The two have collaborated on some fantastic scores from the Proposition to The Road, and including of films I’ve never seen like Book of Eli. I was timid at first because, really, the amount of movies I could pull appropriate songs are limitless and not just held to Cave and Ellis, so if I’m going to allow myself to break a self-imposed rule, I better make it count.

Jesse James lucked out in the end, and I think “Last Ride” is a great segue from our little introduction (to which the credits assumedly roll) as we first meet our characters and enter into the world of “Pretty Deadly.”

I had to include something from Ennio Morricone on the track, and after flashing through quite a few of them this one stuck out to me. I think it particularly works in relation to the opening town introduction sequence; if the aforementioned track is the first two pages of the book, this would be the next two.

As an aside, it was only much later after many listens did I realize: oh, shit. I think this was in Kill Bill. So there goes my anti-soundtrack cred.

For these three tracks, my main goal was to create atmosphere. I think Emma and Jordie do an amazing job of creating a world in “Pretty Deadly,” one that I marvel just looking at let alone trying to enter, so I did my best to pick some music that struck me in a similar fashion. They’re all a bit ambient, certainly have elements of drone snuck in there, but the main goal is accomplished: these songs put me, and hopefully you, into the right mood for this book. I feel like I can get lost in these songs just as I can get lost in Emma’s art and this world.

“Hjurt” in particular is what I imagine “Pretty Deadly” could sound like if it could talk, and “Illuminating the Ten Directions/Mahur” flows so well into that it’s almost as if I did it on purpose. Both evoke classic ideas of Western cinema and the general barren landscape of the Old West, but with a modern and even mystical flair that accounts for Ginny’s role as a reaper in a world where things are not as simple as they may seem on the surface.

I also felt that Grails was appropriate here for the “three lives” aspect, given that the narration of the book is contained within conversation between a dead bunny and a butterfly. That the central figure plays secondary towards the current lead and the anthropomorphic storytellers made the title of “I Led Three Lives” seem very appropriate for our purposes.

When going through all of the songs on Emma’s playlist, one piece in particular got stuck in my head. I had had tracks on shuffle while I just casually listened for things to stick out, and this one did so ten-fold. It haunted me for a while, honestly, and I couldn’t shake it for whatever reason. If for that reason and no other, it had to be in the playlist.

Listening to it while reading the entire issue, though, probably provides the most surreal experience of all these tracks. To me, anyway; reading “Pretty Deadly” in 9 minutes is a waste, but if you find yourself letting the piece subconsciously slip into your mind and then attach itself to the pages within, the way the music connects to the illustrations and the words is uncanny. It doesn’t match-up 100%, but it creates a dark and uneasy feeling that the book resonates on its own, and entwined the two create a real experience to reading this comic, particularly towards the climax where the music never quite peaks with the violence or excitement but still manages to match the contents of the page.

(I would later learn that the reason this piece haunted me so much is that I had heard it before, and in a movie. But, hey, what’re you gonna do, right?)

Murder by Death – Bang Bang (My Baby Shot Me Down)

And now we return to Murder By Death with a cover of Nancy Sinatra’s “Bang Bang” (made famous to modern audiences for its use in Kill Bill, I’d imagine, though I’m sure plenty of cool hipster kids brag about how they always liked that song anyway). The reason we’re going with a cover here is a) because we opened with Murder By Death so it felt appropriate to close with the same band and b) I think Adam’s vocals and guitar playing make for a very interesting delivery of the song that particularly resonates to how at least I view the central figure of “Pretty Deadly,” Ginny the Reaper.

Really, the lyrics to “Bang Bang” play very well against the ideas of “pretty” and “deadly” alone — too much so not to allow this to be the closing of the mix. It closes off the playlist full circle and offers a nice epilogue to the content of the comic, operating as the only song with any kind of vocals to go along with it.

That it is a live track that features applause was just icing on the cake.

Also, it was very convenient that this song is on the same digital EP as the extended version of “Theme,” so that when I was digging through my Murder By Death catalogue I could say — oh, hey! This is perfect!

That’s it for this edition of DJMC. If you like what you hear or don’t, chime in in the comment section to let us know what you think of the mix and/or the column. You can also stream the whole thing right here:

It’s not every day you get superstar creators like Brian K. Vaughan and Marcos Martin to do something special for your site, but when we threw the idea out to “The Private Eye” duo to create a mixtape for their book, to be released guerrilla style like the book it’s the soundtrack for as part […]

We don’t do DJMC as often as we’d like anymore, only busting it out for special occasions. However, you just know that when we do bust it out, it’s the most special of special occasions. Today is just that.With “Burn the Orphanage” #2 in stores today — literally right now!! — Sina Grace and Daniel […]

DJMC #9 – An Interview with Namor!

This week, Marvel announced that there would be a revival of the Invaders team, “All New Invaders” starting in January. We wasted no time in reaching out to one of the cast members of the book, Namor, the Sub-Mariner, about some of his favorite songs for this column. So, without further ado, Namor on Music!“By […]