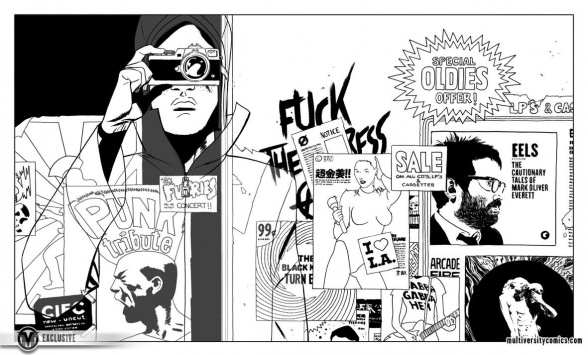 An exclusive page from The Private Eye #7

It’s not every day you get superstar creators like Brian K. Vaughan and Marcos Martin to do something special for your site, but when we threw the idea out to “The Private Eye” duo to create a mixtape for their book, to be released guerrilla style like the book it’s the soundtrack for as part of our Fifth Anniversary Celebration, they took on the idea like they do everything else they do: with vigorous passion and tremendous ability.

The results are below, as we’re proud to present the official mixtape of everyone’s favorite digital comic, “The Private Eye” at Panel Syndicate. Enjoy, and make sure to buy their comic if you haven’t yet. If you have, enjoy an exclusive first look at a very fitting page from the upcoming seventh issue above as well.

Please note, at the bottom of this post, there is an almost full playlist, if you’d like to hear them all in one place, at the bottom of the post. Only the songs by the Bathers and Love & Money were not available on Grooveshark, but we’ve uploaded them to our Soundcloud for your enjoyment!

Take it over, Brian and Marcos:

When the good folks at Multiversity suggested we’d do a feature where we put together a mixtape for The Private Eye we thought that’d be a fun and original way of representing our series and characters. Obviously, thinking is not our forte. That’s why we make comics and not mixtapes. 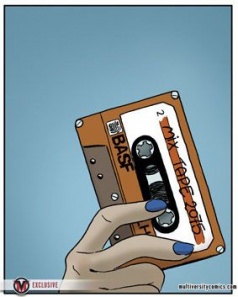 A panel from The Private Eye
Anyway, we’ve seen many people using or suggesting the classic Private Eyes song by Hall & Oates as the main theme for series. Please don’t. If we were to go the literal way we’d all the sooner suggest Rockwell’s Somebody’s Watching Me if only because the music video used to freak Marcos out back when he was a kid. And again, no.

Much closer to the mood and concept of the series we think would be Arcade Fire‘s Reflektor. It’s got that 80’s throwback retro sound with a modern twist that fits the series perfectly. Not only that but the group members clearly decided to pay homage to our main character with their latest look.

Plus, the words “prism” and “reflection” which sound cool. And some grammatically correct French unlike our typo-ridden hitmen. Yep, it’s a winner.

So, if that’s our main theme, we should start things off with The Divine Comedy‘s Here Comes the Flood from their record “Generation Sex”. Although Neil Hannon’s 1999 song doesn’t exactly predict the CloudBurst, he does get the gist of the situation. Hell, even “El Niño” seems set to be making a comeback sometime soon. “If the good Lord had intended me to live in L.A he’d given me a machine gun”.

And after the Flood, Suddenly Everything Has Changed from the album “The Soft Bulletin”. Too literal, you say? Yes, but we don’t care because it’s the motherfucking Flaming Lips.

Next up Blur‘s Out of Time from the album “Think Tank” because our future world IS gently spinning out of time. And it’s a goddamn beautiful song.

Our main character, P.I., can only be properly introduced with Pulp‘s I Spy from their seminal record “Different Class”. Again, a bit of that 80’s psychedelic sound and appropriately paranoid and creepy lyrics about hidden secrets and false appearances.

And now for a brief interlude for the kids with Snow Patrol‘s I Am an Astronaut. Because we can all be astronauts. Or gunmen. Whatever.

Now, no playlist would be complete without some ballads. P.I. and Raveena seem to have some sort of history together so we thought You’re Not the Only One from Love and Money‘s “Dogs in the Traffic” could hint at that. “If honesty is strength and ignorance is bliss, we must be the weakest, blindest people in this city tonight”. Yes, we can see that.

In a similar vein we have Pistol Craze from the album “Sweet Deceit” if only because it’s by Marcos’ favourite band The Bathers. Incidentally, The Bathers’ vocalist/songwriter Chris Thomson and Love and Money’s leader James Grant both created the 80’s best and least known band, Friends Again. So there.

America is Not the World by Morrissey: This song from the 2004 album “You Are the Quarry” could very well represent our antagonist DeGuerre’s hate/love relationship with this new country that has emerged. Although some things have already changed since then… “where the president is never black, female or gay and until that day you’ve got nothing to say to me”. Mmmm, okay, can we start talking now?

Blinking Lights (For Me) by The Eels: For Mel, really, since it’s appropriate in both a literal and metaphorical way. And if you think we’re going to make a mixtape and not include The Eels you’re out of your mind. 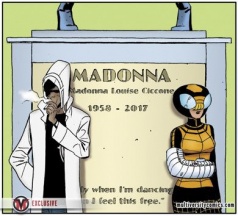 A panel from The Private Eye
Nebular’s increasingly decisive role in the series definitely deserves it’s own theme. And what better than Radiohead‘s Fake Plastic Trees from the classic album “The Bends” to define the melancholic, depressing life of this “Real Doll” aficionado… Also, Muntsa wouldn’t allow us to have a mixtape without including a Radiohead song and we all know she’s the real star of the series.

Okay, so we know what Gramps would say if we told him about this playlist thing: “Readers should turn off their record players and pay attention to their books, goddammit.” But we’re sure our lovable grump wouldn’t mind a Kings of Leon song. And Temple from their latest album “Mechanichal Bull” seems to capture the idea behind the whole Panel Syndicate project pretty well: “I’d take one in the temple, I’d take one for you”. Unless, of course, they’re talking about taking the host in a church. In which case, no.

And finally, we’ll wrap things up with a song from the very conveniently named album “Digital Ash in a Digital Urn” by Bright Eyes. Easy/Lucky/Free sums up in both its sound and lyrics the spirit of The Private Eye series.

Bonus Track: Material Girl by Madonna (the least we could do after killing her off). Because we’re living in a material world… Oh, shut up and go read the damn comic books already, will ya?