There are a lot of comics out there, but some stand out head and shoulders above the pack. With “Don’t Miss This,” we want to spotlight those series we think need to be on your pull list. This week, we take a look at “Black Hammer: Age of Doom” by Jeff Lemire and Dean Ormston. Maybe you’ve heard about it recently being optioned for film and television development or from all those awards it keeps winning.

“Black Hammer: Age of Doom” continues to be written by Jeff Lemire with art by Dean Ormston, colors by living Multiversity Award Dave Stewart, and lettered by Todd Klein.

“Black Hammer: Age of Doom” is the continuing adventures, or lack thereof, of the Farm crew: Barbalien, Golden Gail, Abraham Slam, Colonel Weird, Talky-Walky, and Madame Dragonfly as they continue to try and find a way back home. Meanwhile Lucy Weber goes on a Cosmic Odyssey trying to get back to the Farm after unlocking the powers of the Black Hammer.

This is a direct continuation of “Black Hammer,” the “Age of Doom” subtitle serves both as reference and joke on the current trend of cape comics constantly relaunching and renumbering, I wouldn’t say you need to read the first 13 issues of “Black Hammer” to get into this series. There are obviously connections and plot threads that were previously developed that become more important in “Age of Doom,” but the core of this series is the character work and Lemire and Ormston do enough to get new readers up to speed even if some moments won’t hit as hard.

On a personal note, “Black Hammer” is the first series that when someone inevitably makes a comparison to “Watchmen” it doesn’t make me irrationally angry. Because like “Watchmen” this series power is a mixture of both the story being told and how it is being told. Lemire and Ormston use of the comics as a medium, and the superhero genre, imbues this series with a sense of depth and characterization as they wrestle with the various facets of cape comics as a means of getting at the emotional heart of things. The emotional story that is being told is antithetical to the white male power fantasies this series is wrapped in, as it is fundamentally about a dysfunctional surrogate family learning to live with one another and maybe grow as individuals along the way. “Age of Doom” more explicitly wraps itself in the modes of cape comics compared to its predecessor but it doesn’t forget how to land emotional gut punches.

Being written by Jeff Lemire certainly helps something be great, the prodigious writer and planner clearly has a goal in mind. Those long term goals however don’t stop individual issues from working on their own and slowly leading to moments of such dramatic clarity that you can’t help but feel dumb for not picking up the clues going in. Like “Watchmen” the cast of “Black Hammer” is troubled, but there is a empathy for them from Lemire and Ormston that makes them more human. Without that quality “Black Hammer: Age of Doom” would be yet another beautiful looking, but heartless, reflexive riff on superhero stories.

The above image of the Farm is a portion of a spread from issue #4, but that kind of power and action is a rare occurrence on the Farm. Unless, Gail drinks a few to many. Ormston’s work dealing with Lucy Webber’s odyssey is excellent as his scratchy cartoons evoke various fundamental settings and cosmic spaces. They are spaces filled with the little easter egg references. Those bold images aren’t what make Ormston’s work stand out.

The Farm is a quite space and the series best moments are these quite character interactions. In “Age of Doom” #2, after running into a dead end about the towns history, Barbalien and Gail sit on the steps of the library and instead of talking about what’s next they talk about their love lives. Overall the sequence is 4 pages and serves as the denouement of the issue. Lucy Webber’s journey offers more typical shocking endings, but the emotional end of the issue is centered around two friends talking and opening up to one another about things they haven’t really verbalized with themselves. Ormston is able to capture the hesitancy and pain of emotional vulnerability in their faces, as Gail admits to her relationship with “Black Hammer” evil mastermind Sherlock Frankenstein. 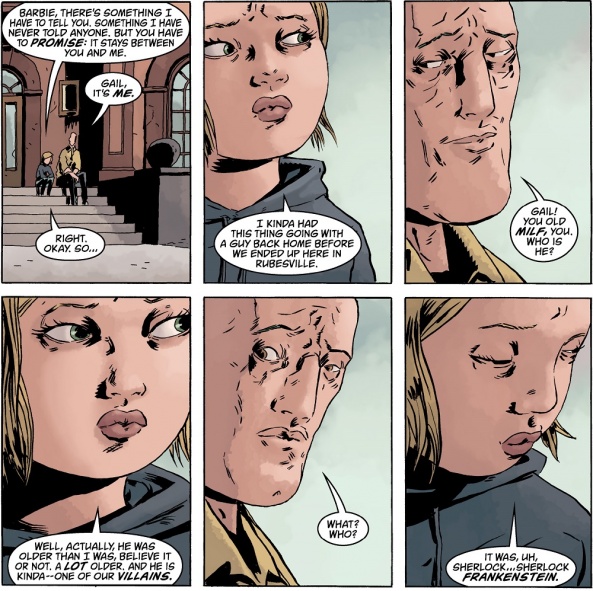