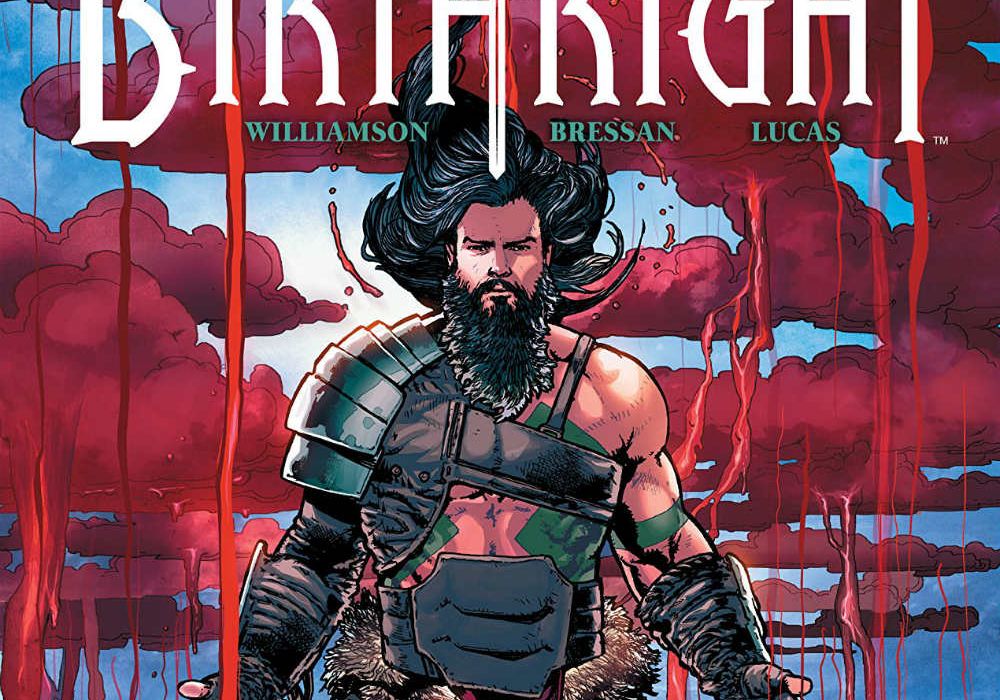 There are a lot of comics out there, but some just stand out head and shoulders above the pack. With “Don’t Miss This” we want to spotlight those series we think need to be on your pull list. This week, we look Joshua Williamson and Andrei Bressan’s fantasy family drama “Birthright” which begins its eighth arc this week with issue #36.

What’s it All About

Like “Die,” “Birthright” is a spin on The Lion, the Witch and the Wardrobe routine as young Mikey Rhodes disapeers into the magical realm of Terrenos, and how that absence effects everyone he left behind. Meanwhile on Terrenos Mikey is proclaimed the fabled savior of Terrenos. A year later, Mikey reappears looking like Conan. “Birthright” mixes well know fantasy tropes and themes, with a bit of deconstruction, and familial drama.

What Makes it So Great

On the surface “Birthright” is another fantasy savior myth, as Mikey Rhodes is transported to Terrenos and discovers he meets the description of the prophesized savior that will free the realm from the tyrannical rule of, self-proclaimed, God King, Lore. That’s a lot to throw at a kid. The hero’s journey young Mikey goes on and the transformation from normal kid to Andrei Bressan’s love letter to Sword from the cover of “War Child” #3, is the series primary B or C plot throughout most of the series, thematically echoing and informing the present. In the present his return disrupts a grieving, dysfunctional, family routine. These two threads in the past and present come together to create a subversive story about expectations, masculinity, and the fantasy genre. As we quickly find out Mikey hasn’t just shirked his duties, he’s out right failed at them, and is working for God King Lore. The redemption of Mikey Rhodes is one of the best character arcs in the series as writer Joshua Williamson and illustrator Andrei Bressan juxtapose 80s hardbodied masculinity, Frank Frazetta fantasy sensibilities, with excellent emotive character acting and emotional vulnerability from Mikey. 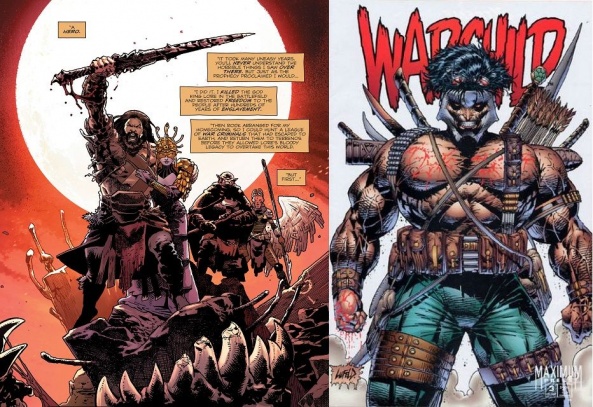 Surrounding Mikey through it all is his family, the one he left behind on Earth and Terrenos, as they come together to try and save his soul, and maybe both of their worlds in the process. As with Mikey, the creative team juxtapose the outsized appearances of their fantasy setting with the more mundane, kind of petty, familial drama of the Rhodes. Early on we spend a fair amount of time with the Rhodes family dealing in the aftermath of Mikey’s disappearance and what that does to a family, how that void can curdle relationships for everyone. Mikey Rhodes is the main character of this book but the Family is a well fleshed out supporting cast that help make moments of action and spectacle dramatically weighty.

There is plenty of familial drama and trauma to go around, which is why the moments of comedy land more often than not. For all the fantasy quest business, the whole thing eventually turns into an extended Meet the Parents or Guess Who’s Coming to Dinner scenario and the anxieties that meeting them can bring. Imagine meeting your long lost sons wife, Rya, all of a sudden. Except, she’s really his pregnant, estranged, warrior, wife … with wings come to save his soul and fix their relationship. That’s a lot to throw at new Grandparents. Of all the commitments Mikey Rhodes finds himself with, fatherhood is a surprising and resonant one as the series progresses. 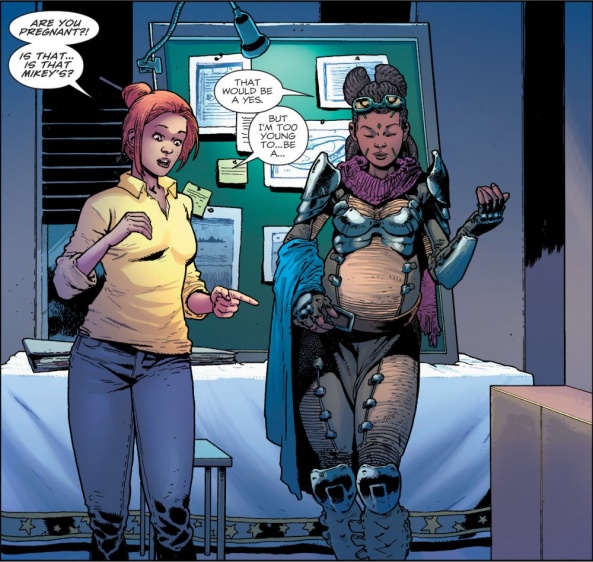 “Birthright” is subversive in some regards, it helps give a twinge of tragedy to all the violence Mikey Rhodes endures and creates, but he was designed like Sword or Conan times 10 for a reason: to make things totally METAL! Technically Andrei Bressan’s line work and page layouts aren’t super stylish like a battle manga, with Adriano Lucas palette everything is functional above all else. That functionality doesn’t mean boring, as Bressan shows excellent framing in the outsized world of Terrenos and how to set that against the mundane world of earth. By framing action sequences the right way, Bressan lets the readers mind do half to job of making these spectacular actions sequences seem more spectacular. There are pages and panels that should be airbrushed on to someone’s van.

As with most Skybound books, there is some hyper violence involved but it is not overdone and allows those moments of extremity to land as shocking and not read as full on parody. It falls somewhere between the director’s cut of The Hobbit: The Battle of the Five Armies and “Invincible.”

Keeping all of this together is one of the series under appreciated strengths, a sound structure. The series is upfront about its quest and the use of the Quest as a narrative early on. Mikey Rhodes needs to take out 4 great mages to stop, or create, a magical portal in the sky. His reasoning for doing this, and their magical mechanics, are complicated over time as the series takes a Golden Sun to Golden Sun: The Lost Age approach and create some interesting ethical dilemmas along the way. What this main quest gives the series is a clear road map to plot everything on and allow for the creation of a feeling of progression. Even when the series veers to more personal territory, they have the next marker setup.