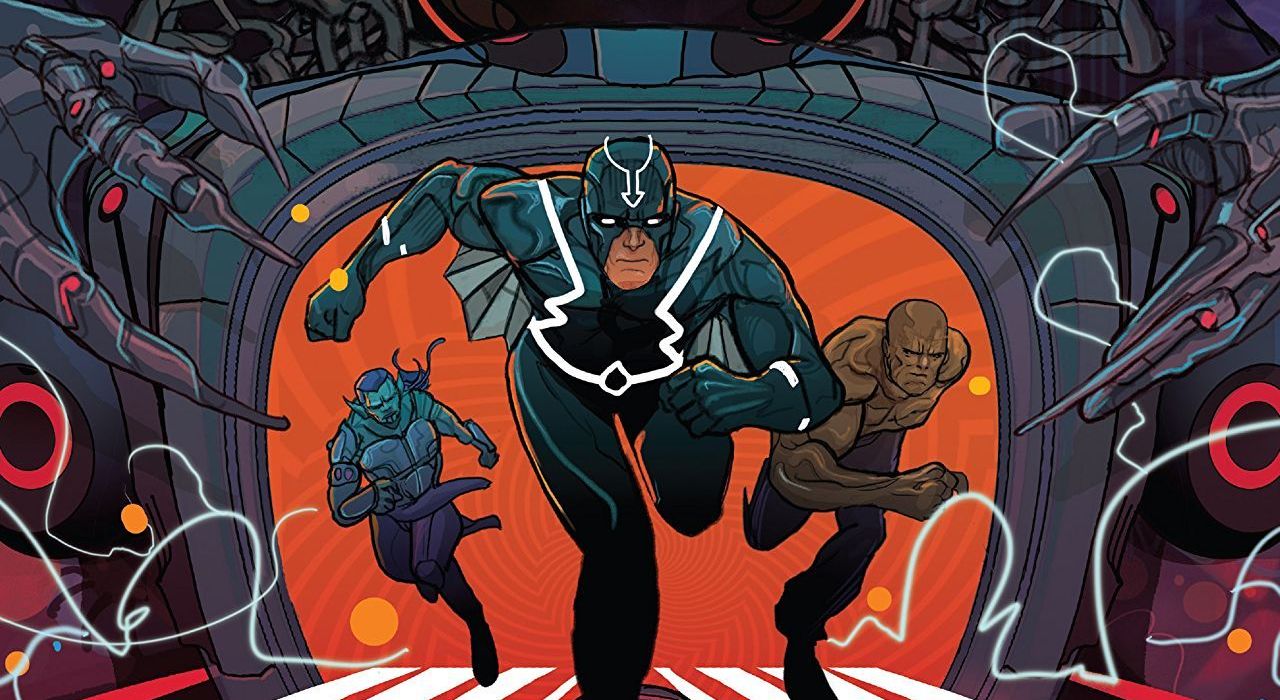 There are a lot of comics out there, but some just stand out head and shoulders above the pack. With “Don’t Miss This” we want to spotlight those series we think need to be on your pull list. This week, it’s all about making the Inhumans great again with “Black Bolt.”

“Black Bolt” is written by novelist Saladin Ahmed (Throne of the Crescent Moon) and is wrapped in the insane visuals of artist Christian Ward (“ODY-C”) with letters from the remarkable Marvel extraordinaire Clayton Cowles (Daredevil).

The name might give it away, but “Black Bolt” is centered around the leader of the Inhumans. The titular character was body swapped with his evil brother Maximus and the hero is exiled to a space prison never meant for him in the first place. The narrative quickly dives into the surreal nature of the prison and all of the insane otherworldly imagery that haunts the character in the first place. As his time in the prison carries on, “Black Bolt” introduces readers to a brand new set of heroes, villains and death traps. The heavy prose and oddball cast of characters add a lot of substance to the insane story that continues to dole out more ideas. The story is chock full of mysteries from who the jailer is to how the character got there in the first place. At the end of the first storyline, Black Bolt has now escaped the prison and felled The Villainous Jailer while making out with some of the more noble inmates. However, now that The Jailer is gone it doesn’t mean life is by any means easy for the hero, in the new installment of the series we find the character struggling to get home and return to his kingdom. “Black Bolt” has had a tremendous first arc, but the series is in a state of flux right now and readers are waiting for the new long-term story to be introduced.

“Black Bolt” defies all meaning and quickly takes the powers away from the lead characters and strands the hero in an unfamiliar environment. With a character so light on words and almost no characters from the Marvel Universe trapped in an unforgiving harsh prison environment, this series should not work. However, Ahmed’s unique and edgy approach to the ominous prose in this book gives it a glorious retro-tinged ambiance and a dark, dreary edge akin to some of your favorite ’70s sci-fi thrillers ala “Solaris.” The action sequences are deadly and full of a huge amount of intrigue that should spark the interest of anyone that is remotely interested in the Inhumans concept or some the weirder aspects of the Marvel Universe.

The other great part of the story is all the new and familiar characters that are introduced here. Thanks to the mind-blowing visuals of Christian Ward and the tense nature of the story, the comic excels at carrying a really dreary tone and high stakes. Readers get the sense that “Black Bolt” and his friends could be close to death as the comic starts to progress. Despite the real tangible threat that the book could feel incredibly redundant with so many stories taking this same approach and setup (looking at you “Edge of Tomorrow”) there’s something about “Black Bolt” that feels firmly implanted in the Marvel Universe and loaded with all of the superhero gothic imagery that will make your eyes sub-plant into the back of your head.

Every issue has some sort of bizarre splash page that challenges the medium and forces readers to rethink their conception of superhero comics and Inhumans titles. In many instances, I wonder if Ahmed revels in the bad reputation of the Inhumans which turns this book into an underdog and gives the contents of the book that much more weight. If the title was just pretty and had crazy splash pages, the book would definitely be fun, but the astute storytelling of Ward is the reason to stick around here. The sense of scale and character designs that the creator lends to the villains really make the story unique from anything else currently on store shelves. Ward’s expressions for figures are so intense that he lends to characters like The Absorbing Man, the look ends up utilizing the physicality of the hero and ends up engrossing the reader in the comic. When binging the title all these narrative elements add up to something that is begging to be explored in a single sitting.

For the upcoming issues, “Black Bolt” definitely needs to find a new focus and serialized narrative aspects, but the latest installment of the series was a nice break that will hopefully make the new issue of the title that much more harsh just by sheer contrast. With the full creative team intact with every issue here, “Black Bolt” has felt authentic and unique all the way through the title. The series is a strong statement that bold storytelling can be crafted by The Big Two Superhero Comics Publishers while still retaining a wonderful, ambitious narrative element.. To put it simply: The King of Attilan needs your love!

Keep your eyes peeled for “Black Bolt Vol. 1: Hard Time” when the title debuts December 19 in a bookstore and digital services near you! “Black Bolt” is currently ongoing, and can be found digitally or in your comic shop of choice.