There are a lot of comics out there, but some stand out head and shoulders above the pack. With “Don’t Miss This,” we want to spotlight those series we think need to be on your pull list. This week, we look at the comic tie-in to the video game and meta-meditation on the nature of monsters, “Bloodborne.” 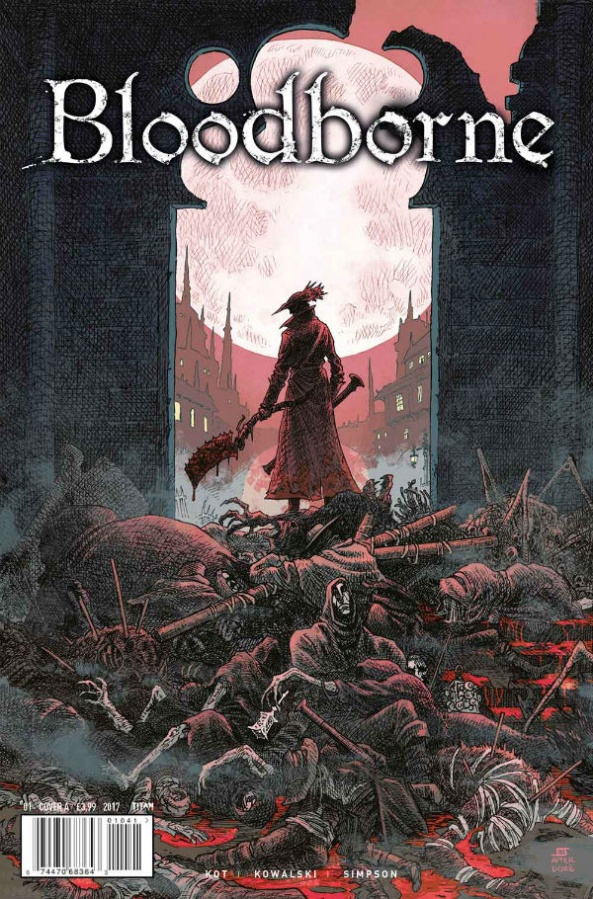 “Bloodborne” is, as mentioned above, a comic tie-in to the FromSoftware game of the same name. The comic concerns itself with a nameless Hunter in the city of Old Yarnham, one who discovers a child with pale skin and even paler blood, and believes it to be The Child and the Paleblood. Who this child is and why the Hunter concerns themselves with it is a mystery. All that is known is the draw of the hunt and the cycle the Hunter is trying to break.

This is a book about monsters, both visible and invisible, and the horrors that stalk the night and our minds. It is also about a parent-figure and a child, fighting against the odds to escape to safety in a world that may not have any. 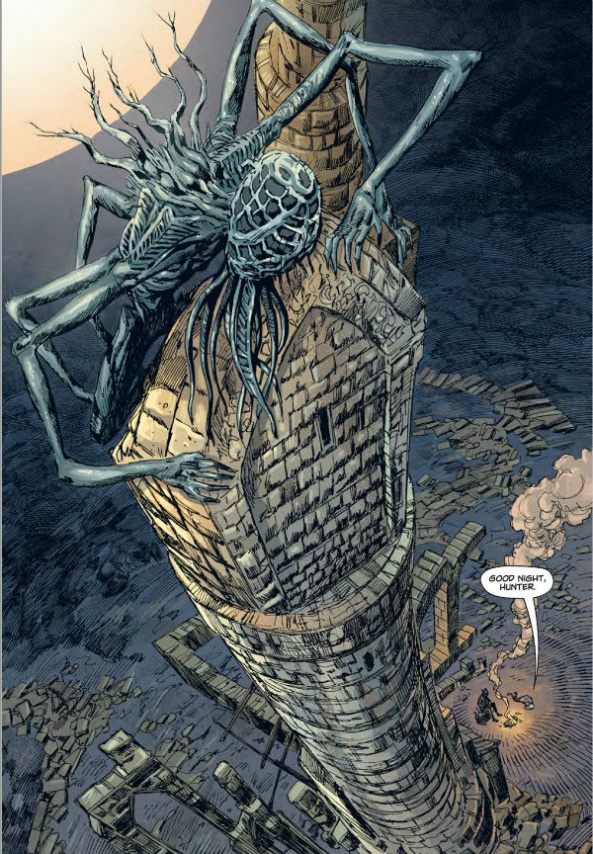 What seems to set Bloodborne apart from other video-game tie-in comics is its focus on the modern video game aspect. There are plenty of video-game books that are steeped in the arcade and platformer era of video game design, simply turning the aesthetic and mechanics into the way the world acts. What “Bloodborne” does differently is that it uses FromSoftware’s biggest selling point, the expectation that you will die hard, brutally, and often, to propel the narrative of the story and bake in into the way the world works.

The Hunter is not aware that they are a video game character, so the cycle of death and rebirth is simply a part of their world. All they are aware of are the endless repetitions of dying and coming back to life, with only a faint memory of what was done before but a knowledge that this time, or maybe the next, will be when they move forwards. It’s a bleak outlook but the world of “Bloodborne” is a bleak one and Kot, Kowalski, Simpson and Bidikar have brought it to life with vibrancy and reverence.

This is an adaptation, yes, but it adapts the feeling and themes as opposed to the story and characters. As this is an open-world, customize your own character, game, there is no central figure. We could have followed any number of the named characters on the paths they had in the game or we could have followed a new creation along the same path that the game lays out but the creative team chose to go with something new. The instructions are the same, “seek Paleblood to transcend the hunt,” and so are the two intro characters, Gehrman and Iosefka, but that is where the story similarities halt. Instead, we are introduced to what the Hunter believes to be their savoir, Paleblood and The Child. 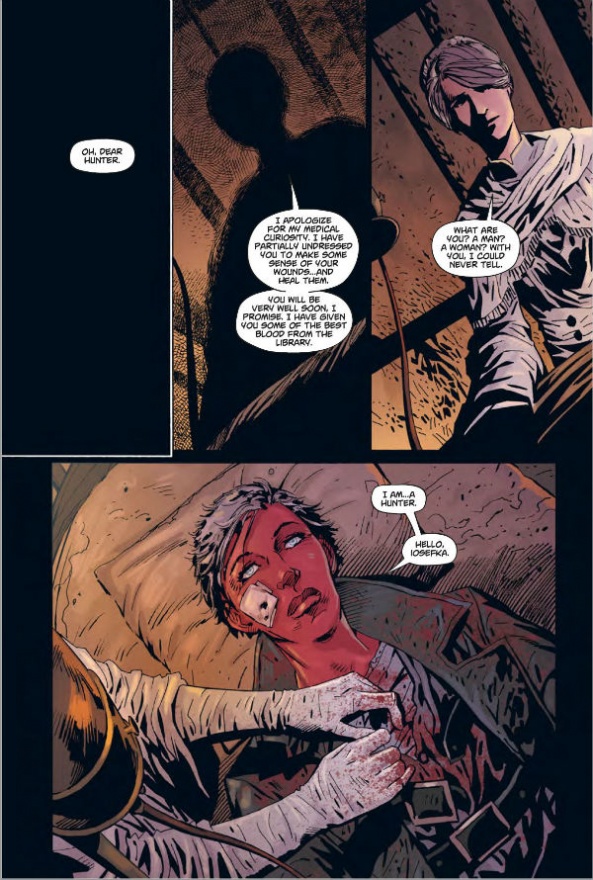 Those of you who have played the game are already aware of these repetitions but as someone who has never played the game, this was new. The mystery of the Paleblood within the game was lost on me yet the ambiguity of the Paleblood and its role in helping the hunter escape the hunt remains. Therein lies the other great strength of this book: it’s use of the deep lore to enrich without gatekeeping. However, none of this would be as impactful or as beautifully horrific without the art team.

Kowalski’s pacing is also the right balance of slow and action-filled, all depending on what the narrative requires. Large panels portray the scale of emptiness and rot within “Bloodborne,” each one a reminder of the world the Hunter must progress through. The heavy use of inking lines conveys the dirtiness of everything as well as adding levels of detail to the pages that makes everything more alive. The monsters, too, are gorgeously rendered, capturing the lanky, almost indescribable horror of the ones in the game. Additionally, the colors, mostly muted browns and greens and greys, makes the Paleblood, the Hunter, and the monsters stick out against the background. They are otherworldly.

Kot’s script is, as mentioned before, meditative on the meaning of the monster, although this is not the focus of the book. The focus is on the Hunter’s attempt to escape the hunt, to escape a cycle of horror they do not want to be part and parcel to anymore as well as the allusions that the ones making them do these things are us, the players. That we keep the Hunter and all others trapped within the cycle of death and rebirth, trapped in the hunt, chasing after that which does not exist. I do not believe the comic will go full Grant Morrison “Animal Man” but I do believe it can be read with that in mind.

It can also be read with an in narrative explanation, of beings “greater” than the Hunter compelling them to be a part of the hunt. Yet they do not want to play the world like a video game, like a dream, indiscriminately destroying those who have been turned. They want freedom, freedom from the control of some outside force, freedom…and rest.

Issue four, the final issue of the first arc of “Bloodborne,” ‘The Death of Sleep,’ comes out today from Titan Comics. Find it, and the other three, at your local comic book shop or digitally at Comixology.com or wherever digital comics are sold.

“Bloodborne: The Healing Thirst,” the continuation of the series, will be out at some point in the future. If you enjoyed the comic, keep an eye out. 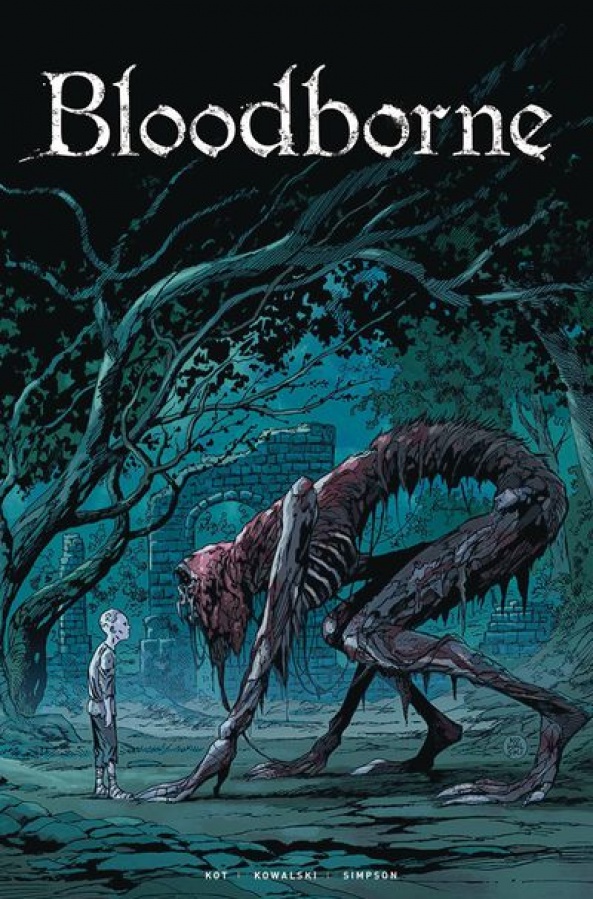 Edit: The original version of this piece erroneously said it was a Bethesda game. This has been corrected. Thanks to Ken for catching this.