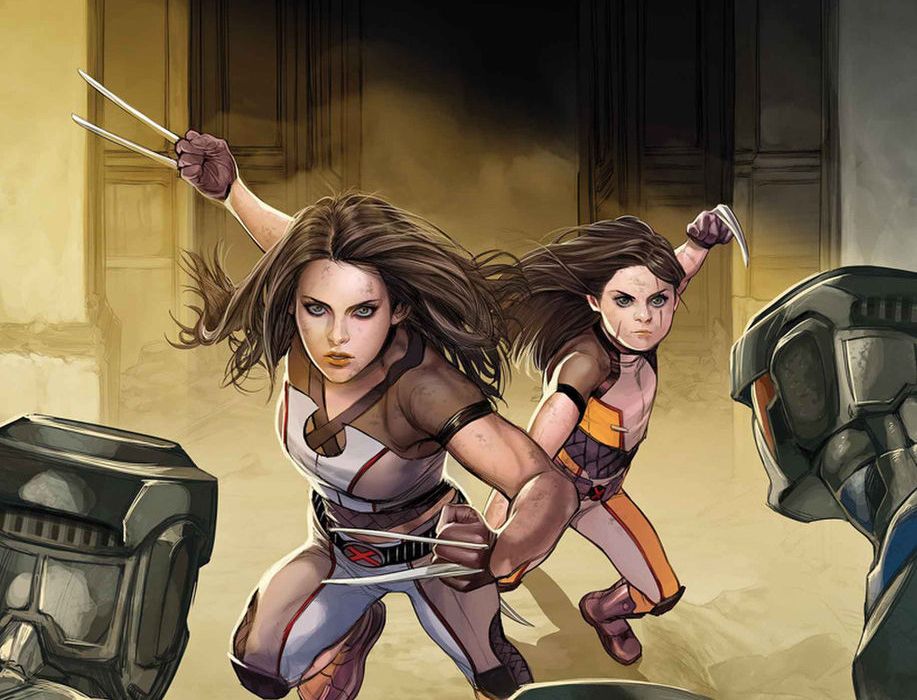 There are a lot of comics out there, but some just stand out head and shoulders above the pack. With “Don’t Miss This” we want to spotlight those series we think need to be on your pull list. This week, we look at Mariko Tamaki, Juan Cabal, and Diego Olortegui’s “X-23,” which concludes its twelve-issue run this week.

Mariko Tamaki has been working with a variety of different publishers across comics for several years, both in graphic novels and multi-issue comic book arcs across several months of releases. In terms of graphic novels, she is most famous for her work with her cousin Jillian Tamaki at First Second Books on “This One Summer” in 2014, which won both the 2014 Ignatz Award and the 2015 Eisner Award for Outstanding Graphic Novel.

Her more recent, serialized work has been rather varied. From 2016-2017’s twelve-issue “Tomb Raider” comic at Dark Horse (to take place between two of the video games of the franchise) to the elseworld miniseries “Supergirl: Being Super” at DC in 2017, to a sixteen-issue run on “She-Hulk” between 2016 and 2018 followed shortly thereafter by “Hunt for Wolverine: Claws of a Killer” at Marvel, Tamaki doesn’t seem to stay in one place for long.

Juann Cabal, the illustrator on the first half of the series, continues from his work on Tom Taylor’s “All-New Wolverine,” helping with the transition from one series to the next. He is also known for his work on “Wolverines” and “Elektra: Always Bet On Red,” along with his current work on Taylor’s “Friendly Neighborhood Spider-Man.”

Diego Olortegui, the illustrator for the second half, has done earlier work for Marvel in Reilly Brown and Frederick Jan Van Lente’s “Slapstick,” the latter portions of Tamaki’s “She-Hulk,” and G. Willow Wilson’s “Ms. Marvel.” 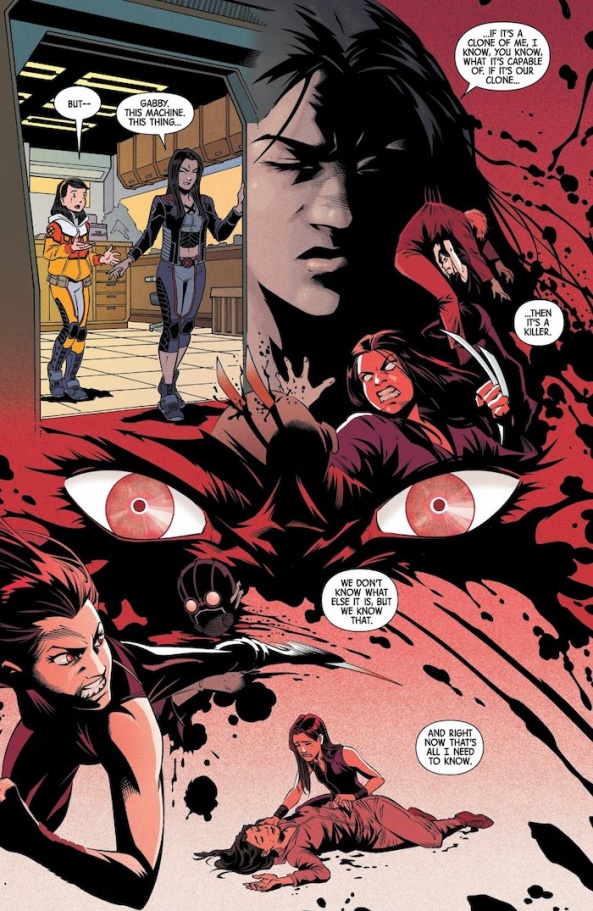 Continuing off of the heels of Taylor’s acclaimed “All-New Wolverine,” Tamaki’s “X-23” had a lot of skepticism aimed its way with the rejuvenation of the old moniker. Why would Laura Kinney go back to being known by a designation used by those who tormented her, especially after definitively moving past it? Why not, if she were to give up the title of Wolverine (“conveniently” in time for James “Logan” Howlett’s resurrection), pick something new?

Fortunately, Tamaki shows that in taking ownership of such a name, of such a horrific history, the newly re-christened X-23 is able to fight back against her oppressors more directly, but also using her darker elements of her past to steer her in at times less than stellar directions for interpersonal relationships. After all, it comes down to what Tamaki’s “X-23” is at its core: a book about those relationships with her past.

Extremely important to the story’s style is Laura’s sister (really clone, but let’s just say sister) from “All-New Wolverine,” Gabby, a.k.a. Honey Badger. While Laura is prone to dark moods and very mission-focused, Gabby is a lot happier, focused in on individual people and forging new emotional bonds. In fact, the story itself is largely concentrated on their sisterhood, from what binds them together to what sets them, at times tragically, apart. 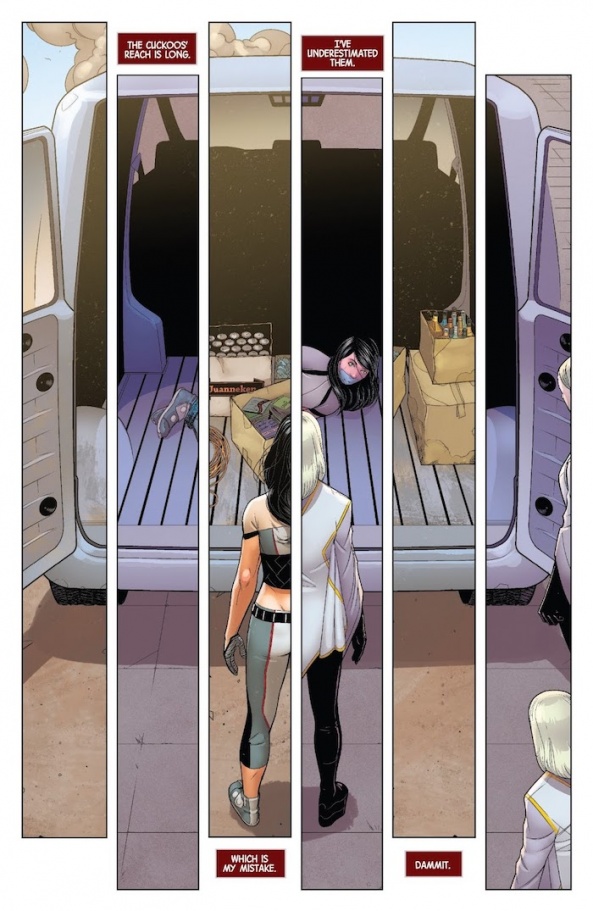 The first half of “X-23” emphasizes the tight bond between the two, putting them together with the Stepford Cuckoos to demonstrate a very different kind of sisterly relationship. Pitting the antagonistic experience between the Three-In-One (plus more) against the Kinneys, Tamaki is able to show how there is a big difference between the Cuckoos speaking and thinking nearly in unison and Laura being much more emotionally close to Gabby without having any of that direct connection.

On the other hand, Tamaki uses the second half of her story to demonstrate another, tragic difference: the disparate mindsets between Laura and Gabby. While X-23 sees nothing but pain in what she and her fellow clones are made to be (and, as has been shown in her history, with some semblance of a good reason), Honey Badger wants to see the best in everyone, and is proven to be right about doing so about as often as she is wrong. This kind of conflict leads, inevitably, to fights, but a different kind of fight than Laura is built to handle, leading to some of the sadder moments of the twelve-issue run. 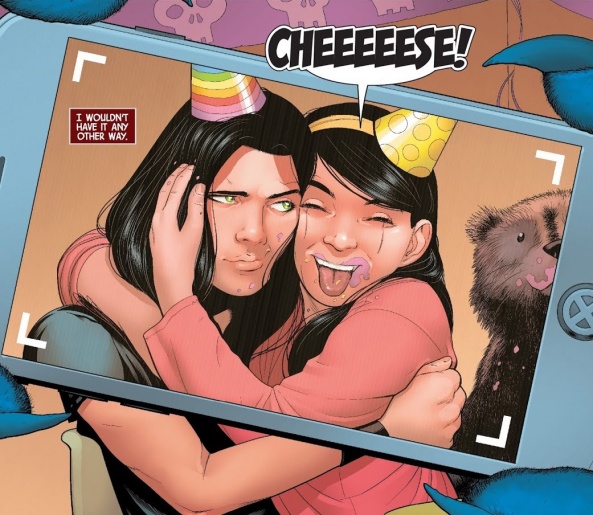 Key to where “X-23” is in its twofold narrative. While the conflict with various clones and cloning projects do serve as an action-oriented backdrop, complete with some of the nastiest healing scenes in a while (especially in the first arc), the real story seems to be hidden in its backdrop, only to come to the fore in the last few issues. This kind of dual nature, hiding the A plot so well within the B plot so that the eventual switch in overall focus benefits them both, helps to create a story with several different layers that can’t really be cut apart with the simple “snikt.”

Blood runs deep in the story, both flowing from friends and foes in a literal sense, and coursing through the relationships between certain people in a figurative sense. Tamaki shows X-23’s heart that the character herself might at times deny while not ignoring her faults and failures either, creating a worthy successor to Tom Taylor’s previous work with the sisters. 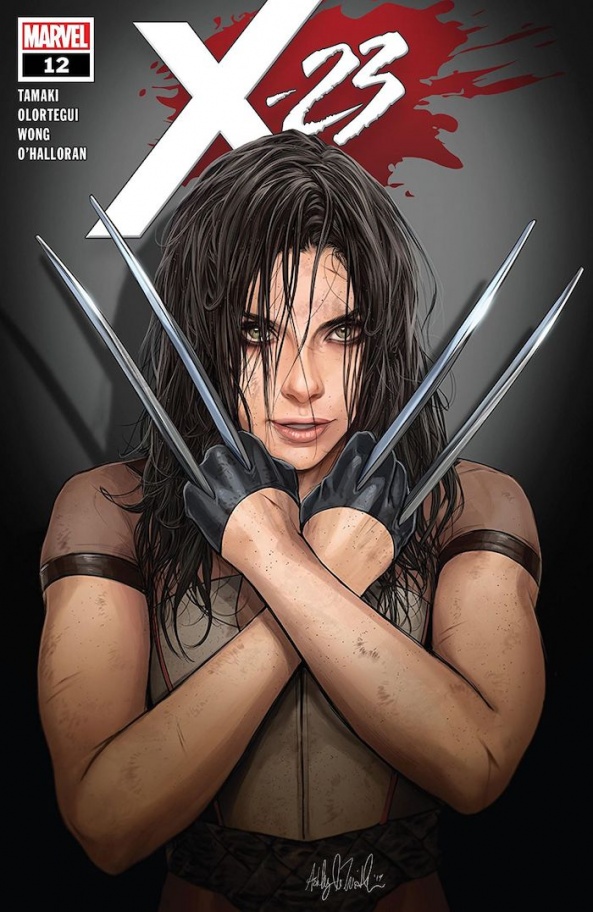 “X-23” is available anywhere comic books are sold. The final issue of this fourth volume of the series, “X-23” #12, is out today. The first six issues are already collected in trade paperback form under the name ‘X-23 Volume 1: Family Album,’ with a second trade paperback, ‘X-23 Volume 2: X-Assassin,’ scheduled to arrive in August.