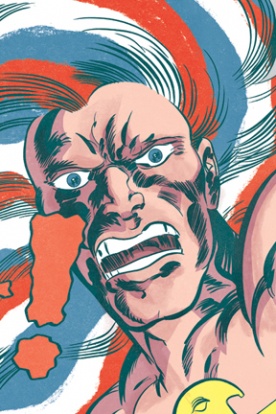 Tom Scioli’s “American Barbarian” is one of the most startlingly inventive and enjoyable comics of the last decade.  Broken up into a number of enthusiastically told chapters, it tells the story of Meric, the red, white, and blue-haired hero facing off against the evil Two Tank Omen and his deadly hordes in a post-post-apocalyptic tomorrow.  It’s a story about comics, bravery, freedom, and almost more importantly, REVENGE!!! and it’s one you should definitely read.

“American Barbarian” is equal parts He-Man, Kamandi, and Braveheart, but with all of those known influences, it still somehow manages to be unlike anything you’ve read before, so to describe the series is to ring all the fun out of it, honestly.  So for story points, just do yourself a favor and go check it out, but if you need more than that, well, here are the high points: a tangle of swords, the last Honda Civic on Earth, the best two-page spread you’ll ever seen, some amazingly well-used swearing, and Robosaurs.  And I won’t even get into the series’ main villain or Scioli’s masterful introduction of the guy, because I just can’t do it justice.  Not in a million years.  But Two Tank Omen is on the march!

Scioli, best known for his work on Image’s “Godland” and variety of Kirby-infused projects here and there, originally created “American Barbarian” for the web, but the recent, beautifully designed collection from AdHouse books collects the entire saga in one, easily shelved or displayed volume. 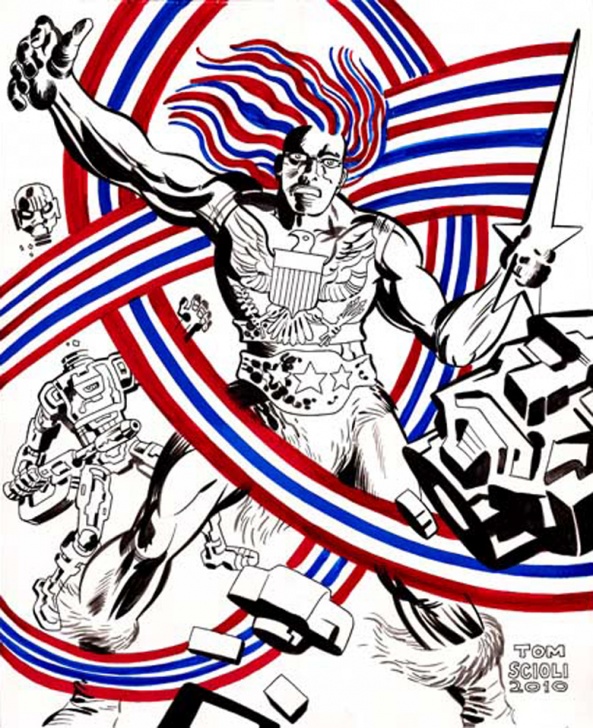 It’s a wonderfully fun showpiece that incorporates everything Scioli enjoys, from Kirby to King Hiss, and beyond!  And while I’m enamored with the collected version, I’ll always be partial to the web series.  What makes Tom Scioli — the webcomics artist — so fantastic is his absolute fearlessness and unhindered vision for the series.  In the pre-Crisis version of Multiversity’s own podcast, The Hour Cosmic, I interviewed Scioli and talked with him about the experience of creating comics for the web, and mentioned how much he enjoyed the freedom of being able to do just about whatever he wanted to do.

And that’s one thing that I found exhilarating about the stories earliest day — you never quite knew what you were going to get from Scioli.  It was like, “Who knows?”  You might get a relatively standard, straight forward page today, but next week would see Scioli working with paints, and the week after that, maybe it’d be a page done fumetti style.  With the almost factory like creation of modern comics, it was fascinating to watch a truly impassioned creator explore the form on a public stage, and even more exciting to see him getting it so right over and over again.

Here’s the best part: “American Barbarian” is available to read online right now at AmBarb.com, so there’s absolutely no reason not to jump on now!  Currently, Scioli’s 20 odd pages into his newest comic, Final Frontier, which you should also check out while you’re there.

But if you want to be awesome — and who doesn’t — hit up AdHouse Books and pick up the collected “American Barbarian” for $19.95.  It’s a crime not to drop a dime on such a action-packed good-time!  Trust me, you won’t be disappointed!

Enjoy this previously unpublished “American Barbarian” strip, brought to you directly from Tom Scioli himself! 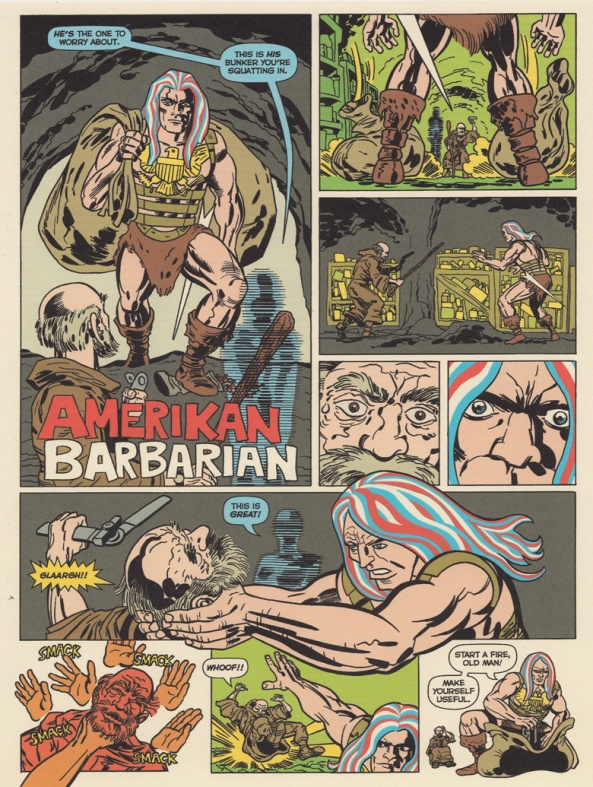