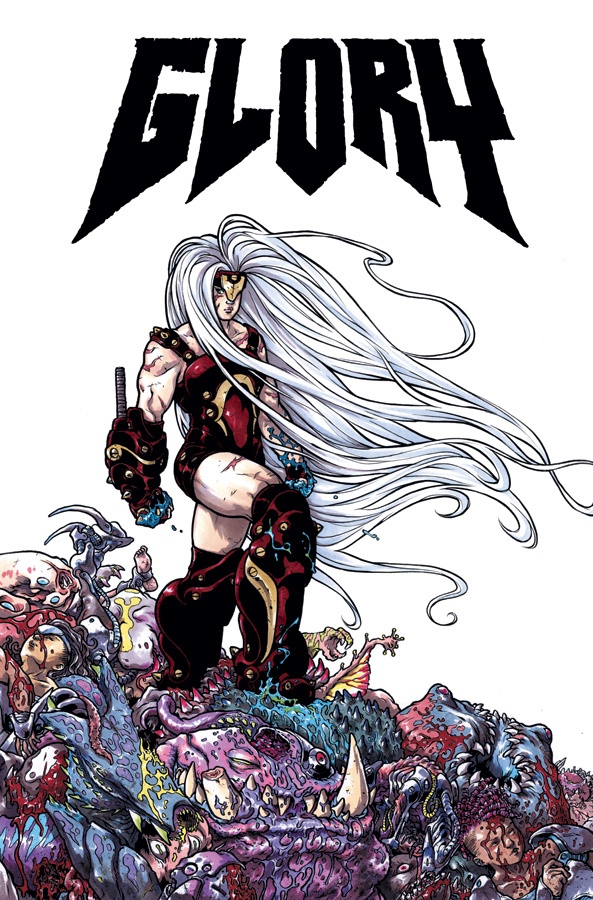 Glory, a character created by Rob Liefeld in the 90’s never really got her time to shine. She ran for 22 issues before the imprint all but completely ceased operation. Only, a few months ago, Liedeld and Image brought back all of his creations to comic shops. “Glory” was one of the first, and it also happens to be one of the best. You should be reading her book.

Imagine Wonder Woman. Now imagine her unbound by the editorial edicts of DC Comics. She’s free to be the warrior she was always meant to be. She can fight Nazis and not pull punches. She can kill douchebag villains and not be made out to be the bad guy. She can rip arms off and she will not care. Have you imagined it yet? Well, if you can, you’ve just gotten a glimpse into what “Glory” is like.

Written by the talented Joe Keatinge, who also happens to write “Hell Yeah!,” “Glory” is a gloriously bloody and violent sci-fi action book starring the Amazon Glory, an alien princess born of an alliance between two races. She grows up to be a warrior, and she looks the part. She’s big, she’s muscular, she’s covered in scars; she looks exactly like you would expect an Amazon to look like if they lived today. This was a very conscious effort on Keatinge’s part, who wanted his title to have a different feel from the rest. In the first issue, he even established a new thread that hooks you in: Is Glory more of a danger than everyone thinks?

But if we’re being honest, Keatinge got me with one panel in the relaunch issue.

You sure know how to punch a tank, Ms. Demeter.

And that quote is the essence of why it’s so great. In those ten words, you learn some essential things about the book.

If there’s one thing that is the most obvious in that quote, it does not skimp on the action. In fact, it celebrates it. Glory is a fighter, and she will fight until she doesn’t feel she needs to anymore. She’s not someone who wants to sit around and talk. She’s actually a rather taciturn individual who lets her actions speak for themselves.

Glory in her present form (as of Issue #23) was intended to be a role model for female comic book fans. She’s not sexualized or made to exist solely for the benefit of anyone but a fan. There’s no cheesecake involved, just an incredibly powerful fighter who would give her inspiration Wonder Woman a run for her money, and may even be able to go toe to toe with mega powerful characters like Superman.

While that line makes me laugh every time I read it, it’s not the funniest book in the world; but it’s not supposed to be.  Keatinge simply has a talent at giving each character a personality, and that comment of disbelief spoken by a WWII soldier after a battle with Nazis gives you an idea of how much fun you’re in for. It’s a pretty dark book, but it doesn’t take itself too seriously, and it lets you revel in the fact Nazi tanks get punched or aliens get their arms ripped off while Glory is covered in blood that is not her own and somehow look amazing while doing it.

While brings me to the final piece of the puzzle: Ross Campbell’s GORGEOUS art. His design for Glory in particular is intimidating and beautiful in her own way, and he never skimps on offsetting her gorgeous design with bloody battle scenes or terrifying aliens, letting most of the blood Glory spills. His chemistry with Keatinge also allows him to push the words further than simple prose would be able to accomplish. The emotional scenes are filled with dread or joy or horror, and it all works perfectly in the context of the story.

On a personal note, one of my favorite things about Campbell’s art is his clever use of her hair. Hair is often used poorly in comics (and video games), but her free flowing locks look gorgeous in ever panel, even when it’s braided.

As you can see, I REALLY love this book. It quickly became one of my absolute favorites Image is putting out, and is an excellent example why I think they’re already a frontrunner to get Multiversity’s Publisher of the year (which would be the second year in a row). However, I was HORRIFIED to learn that when I put it in my pull that I was the first person to do as such!  This book, which has only 4 issues out since it relaunched in February, definitely deserves to find its way into your pull. What’s the worst that can happen? You get to see her punch a tank!

Pick up “Glory” at a comic shop near you. Tell them I sent you! They’ll look at you funny because they don’t know me (unless you live in certain parts of the East San Francisco Bay Area, that is), but tell them anyway.