Anybody who was reading comics in the late 1990’s can attest to this fact: there was never a worse time in comics than then. It carried into the beginning of the following decade a good bit, but for the most part when the decade turned the quality of comics took an upswing.

But the 90’s were a period of excess, a period of foil embossed covers, a period of zero issues. It was a time where style ruled and good storytelling was forgotten. I should know…I grew up then as a voracious young comic reader in Alaska.

Every once in a while there was a shining light, and I wanted to highlight three of the more forgotten ones that only lasted for a little while: DC’s Hourman from Tom Peyer and Rags Morales; another DC title written by John Arcudi and illustrated by Doug Mahnke named Major Bummer (and edited by Peter Tomasi!); and last but not least, an Acclaim comics title from Christopher Priest and Mark Bright named Quantum & Woody. These three comics favored effective storytelling, hysterical situations, and solid craftmanship over limited edition hologram variants, and I loved them for it.

Read why after the jump.

Up first I have Hourman from Tom Peyer and Rags Morales. It starred the android version of Hourman that was created by Grant Morrison and Howard Porter in JLA #12. When he was originally created, he was seen as an apprentice to New God Metron and was imbued with the characteristics of the original Hourman (Rex Tyler). But Peyer took special consideration to make this character wholly his own.

In the first issue alone, Hourman set out to develop a sidekick/life coach in former JLA mascot Snapper Carr and to start figuring out what it would take to grow as a person. Of course with Snapper being a total goofball and a legacy guy, he insists that the best way for him to figure out how to grow is to get a normal life. By that I mean he informed Hourman that he needed to get rid of the Worlogog (it was an item given to him by Metron that basically made him omnipotent and the master of time) and that from then on he was going to refer to him as Matthew Tyler.

For the 25 issues of this series, this was a match made in heaven. Tyler and Carr formed quite the deadly duo of hilariousness and the heart of the book, as they got into all kinds of misadventures trying to figure out their way in the world. The absurdity and quirky nature of the book made it impossibly likeable, with the title somehow making the first cup of coffee and even Day of Judgment seem like a monumental event (Snapper makes a demon named Torcher reconsider his evil nature by having him taste cheesecake).

Rags Morales was an unknown then, as this was well before Identity Crisis or First Wave. Yet while reading this book I had no question that he was one of the top talents in the industry. Because of what Peyer demanded with his scripts, Morales had to weave in and out of styles on a panel-to-panel basis, but he always managed to make everything work beautifully.

This book was a beacon of excellence in a time of mediocrity, which is why it was unsurprising that it died an early death. Still, with major support from editor Tony Bedard and other industry stalwarts (Mark Waid and Grant Morrison were allegedly huge fans), this book lasted 25 issues. Here’s hoping we get more some day.

The next title I want to talk about was also a DC book and one that was even more short lived and under read than Hourman. Major Bummer lasted only a little over a year with just 15 issues released, but it had little to nothing to do with the quality of the book. In fact, it has one of the most original concepts in comics I’ve ever read. 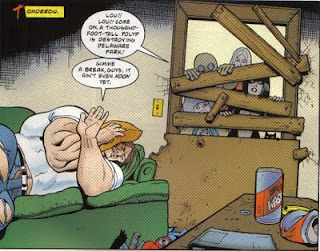 The story is about a guy named Lou Martin. Lou is a slacker and a relatively intelligent guy who pretty much doesn’t care much about anything. Martin Louis is a lawyer and all around good guy who wants the best for the world. When two alien college students set out to write their thesis on heroes in Earth culture, they accidentally give Lou Martin powers instead of Martin Louis, and the rest is history.

Because of this “gift”, Lou is now insanely muscular, incredibly strong, and granted super-human level intelligence. In the hands of someone who really cared, this would mean something. But because he was just so damn lazy, he can only use the enhanced intelligence when he focuses really hard or if he isn’t even thinking about it. In reality, all he wants to do with these powers is the exact same thing he always did: absolutely nothing.

Much to his chagrin these powers also draw in villains to battle and heroes to lead. So much for his slacker ways.

Both John Arcudi and Doug Mahnke at the time were not very well known in the superhero world, but they had previously worked together on the Dark Horse Comics title The Mask (as in the Jim Carrey movie). Their creative synergy was fully evident for the whole of this run.

Arcudi made this book brilliantly funny, wonderfully playing on Lou’s charming vagabond ways and creating a brand new cast of characters that were incompetent and failures at nearly everything they do, yet hilarious. I mean come on, any book that features a villainous Nazi dinosaur (Tyrannosaurus Reich!) has to be great, right? This book was spiritually similar to Garth Ennis’ and John McCrea’s Hitman, except way more on the light side. If you’ve read that woefully under read book as well, you’d know that this is one hell of a compliment.

Doug Mahnke’s contributions as an artist were spellbinding, and this was long before he was known as one of the go-to guys in the superhero game. His superb pencils gave us a ton of visual gags and a lot of the storytelling power, as his intensely detailed yet clean pages were exceptional even a decade ago.

Even more so than Hourman, Major Bummer was destined for failure then. A relatively unknown team in the superhero game combined with a brand new cast of characters and no event affiliation? You might as well have not made the book then. Thankfully they did, making this is one of the most underrated books ever.

Last but certainly not least we have Quantum and Woody, a book that needs no introduction. Okay, it probably does. Point in fact, you probably have no clue as to what it is. This was a book by Acclaim Comics before they went defunct because their video game business died (seriously), and it was written by Christopher Priest and Mark Bright. In its short time of existence, it was canceled twice and released 22 issues (1-21 and 32…how weird is that?), all of which were hilarious and controversial in just the right way.

This wasn’t just a superhero comic, it was a buddy comedy with racial roles reversed and a very confrontational nature. Priest never pulled punches, and his readers loved him for it. He gleefully played with all kinds of touchy subjects, subverted standard superhero structures in favor of what would best work for his book (fancy that), and managed to create two of the more unforgettable characters of my comic reading life in Quantum and Woody.

The title found the two title characters starting off as best friends, then falling away from each other as they aged (with race being the dividing factor in the eyes of Eric “Quantum” Henderson), and then coming back together when their parents died. As they investigated, they gained a pair of control bands that forced them to touch them together every 24 hours or to dissolve into pure energy.

They also got sweet powers from the deal, which of course the upright and erudite Quantum and the bizarre and comical Woodrow “Woody” Van Chelton wanted to use in massively different ways. Quantum wanted to right wrongs, Woody wanted to get ladies and wear badass costumes. Think of Quantum as Batman and Woody as Booster Gold, except Batman is a very well off and highly educated black man and Woody is a goofball white man with a little bit more street knowledge.

The tone of the book was almost always comical, but not in such a way that it would get tired but in a way that was used successfully as a driving force for the plot. Priest’s ability to ably make humor a constant and to confront race relations in a non-preachy way were two of his greatest gifts on this title, and something that was sadly missed by most mainstream audiences. I mean come on, they were an admittedly terrible superhero team with a sidekick that was a goat. There is a lot to love here people.

Mark Bright’s work never really matched the heights of Priest’s writing, but he did a perfectly fine job. When necessary, he could use visual cues to make the reader laugh. He did a good job on action scenes. Really, Bright was a bit of a renaissance artist, providing quality in all aspects of his craft but not really excelling in any of it.

This book was far and away the most under loved book in my mind from that period, and something that I can almost call wholly my own due to the fractional audience it once had. However, a lack of an audience does not vilify a book, and this was a book that provided a lot of great reading experience for myself and helped turn me into the discerning reader I am today. All three did, and all come highly recommended from me. Now good luck finding them.