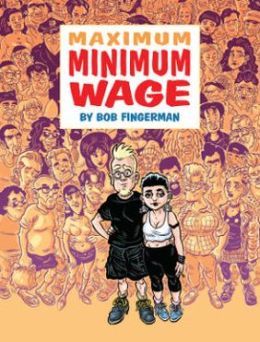 The whole “Saga” #12 ejaculate controversy got me thinking about the first time I ever saw such a thing in a comic book. I was trying to figure out why this particular panel of a decidedly adult comic book would cause such consternation among comic book fans, retailers, and the corporate entities involved. I started to think about all of the great weird, gross, erotic, and horrible things that I’ve seen comic books do to push the boundaries and press buttons – probably most of them before my fragile mind was ready to process them. It occurred to me that while “Saga” #12 just might be the most pop culture relevant comic book work to contain such explicit content, it was hardly the first to do so and that probably nary a retailer has been thrown in jail for selling stuff with equitable content.

And it made me think of “Minimum Wage” by Bob Fingerman.

Because of the penises. 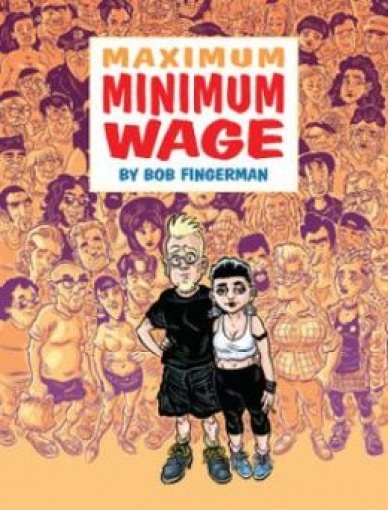 Now, you might say, how does one arrive at recommending “Minimum Wage” through such an obtuse pathway of the mind? Well, first of all, there’s a terrific hardcover package that just came out from Image Comics called “Maximum Minimum Wage.” Thanks to Image Comics, this old 1990’s gem has been in the forefront regions of my mind as of late. It’s 360 pages, looks beautiful on your shelf, and lists for $35 bucks. Now $35 would be a fine bang for your buck, but you can find it from certain online mega-retailers for just over $20 dollars. That’s the kind of price that makes you think of the too-good-to-be-true listings that our main “Minimum Wage” characters, Rob and Sylvia, run up against during their NYC apartment hunting in the earlier parts of the series.

Second of all, “Minimum Wage” (along with Evan Dorkin’s “Milk and Cheese”) was my first glimpse into a world where comics were more than just guys and gals in capes. I was far too young to understand what I was seeing. (Let’s see, I would have been around 8 or 9 when these books were being released, which would coincide with my first experiences going into actual “comic book shops”) I would see the works of Fingerman, Dorkin, Dave Sim, and Mike Mignola in the back pages of Wizard Magazine. I would see their comics in bins segregated from your Daredevils and your Spider-Men. I would always go back to the Spidey (it was the clone saga, for crying out loud!), but something always stuck in my mind about these odd little indie books. They burrowed into my subconscious. I remember Alternative comics catching my eye as a kid because they looked different and they were about different things. They were about things that I didn’t know a comic book could be about. And I wanted to know more about them, simply because I secretly kind of felt like I shouldn’t be looking at them. I was getting away with something.

I returned to these works when I was at an age that I could acquire them and appreciate them with something more than my then-infantile curiosity. After all, what would a 9 year old want to read about a starving artist trying to buy an apartment and keep it together with his girl for? I returned to them at an age where I was just as curious about life as I was about whether Batman should really be shunned for keeping a file on how to defeat all of the members of the Justice League. And “Minimum Wage” is life. And you begin to realize how lifelike it is once you’re the same age as these people, trying to your life out while the world tries to keep you down. Every time I looked at it, “Minimum Wage” went from being less of an offbeat and vulgar curiosity to being more of a keenly comedic and dark reality. I grew into this book.

“Minimum Wage” is about a guy named Rob, who does freelance work for a porno magazine to pay the bills while he waits for his art career to bud. He and his girlfriend move through the every day challenges of relationships and finance with a cynical viewpoint and a unique set of neuroses. The style of comic, no doubt, reminds one of Harvey Pekar’s slice of life stuff, but Fingerman’s stories are less idiosyncratic and skewed. Fingerman plays the situations for more genuine laughs than Pekar’s work did. Fingerman’s work is also less pretentious than most indie comic “slacker” books. There’s a lot of geek jokes and references that the average fan can identify and laugh with. “Minimum Wage” wants to be inclusive – not so overly smart and pleased with itself that it becomes detrimental to the story. And I hate to use the term “Slacker” – though that’s what the book has been shackled with. Because these people are really trying. They’re trying to balance their dreams and explore their talents in a world that doesn’t always allow you to do that. There’s a lot of stuff that the average comic fan, writer, or artist can identify with here.

But thirdly, I thought of it because of this:

Ha! I thought that was so awesome when I was a kid.