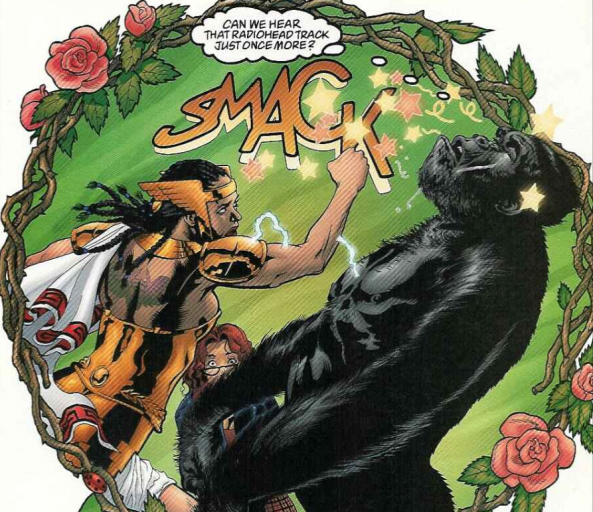 When new comic fans begin approaching comics on a creator-by-creator basis, rather than through misguided character loyalty, Alan Moore is often one of the first creators a new reader will follow. After all, he is possibly the second most famous name in comics after Stan Lee, with more than a handful of popular movie adaptations made from his comics — albeit without his blessing in some or most cases. Almost everyone starts with “Watchmen” or “V for Vendetta,” progressing from one to the other. From here, though, people tend to branch off in different directions, some picking up “The League of Extraordinary Gentlemen,” others “Swamp Thing,” and a brave few picking up the hefty tome that is “From Hell.” Moore’s ouvre is large, dense, and full of great comics, and so it can be hard to pick out one specific comic to recommend above all others. One gem among many that manages to shine even brighter than the others, though, is “Promethea,” Moore’s treatise on magic as told through the story of a teenage girl who is the next in a line of hosts for a once fictional character, and is destined to bring about the apocalypse. While the story is, without a doubt, a great one, “Promethea,” like any great work of art, is great because of its meticulously crafted presentation and its well spoken message. Welcome to your new favorite comic.

There are many things about Alan Moore’s writing that makes it impressive, but what has always stuck out to me, as both a reader and a critic, is his sense of structure. Rarely does a comic by Moore seem like it just “goes”; every page, every issue, every arc seems to be following an almost mathematical formula. Of course, this is not to imply that there is anything robotic or automatic about Moore’s work in the slightest — the skeletons that he builds on are dazzling creations that are unwordly, even if the viewer can see how everything fits together. The classic example of this that almost every comic fan is familiar with is the fifth issue of ‘Watchmen,’ “Fearful Symmetry,” wherein the panels and layouts are reflected across the center fold of the issue. Moore’s sense of composition, however, is taken to its utmost extreme in “Promethea,” and it is nothing short of awe-inspiring to see in action. An example: issue #12, “Metaphore,” involves a treatise of sorts on the Tarot. Each page relates to one of the different major arcana, and contains the following: a poem in iambic pentameter relating to the current card, an anagram of the name “Promethea,” and an image of Aleister Crowley at a different stage of his life, relaying the next portion of a joke that stretches across the entire issue. It sounds like a mess, but all three of these portions are related on each and every page, and progress in the same direction as you read on. This is also done on an issue by issue basis: before “Metaphore,” there is a story arc where each issue relates to one of the four suits of the Tarot’s minor arcana; after, there is the largest arc, where each issue involves a journey through a different sphere on the Hermetic Qubalah’s Tree of Life. Even the number of issues in the series has symbolic significance! Themeatic grouping of issues and pages has certainly been done before, but Moore proves himself to be the master of this compositional technique with every page of “Promethea” — which is understandable, given the structure necessary for the metaphysical subject matter.

By this point, most comic fans are familiar with artist J. H. Williams. His work on “Batwoman” in particular has been his latest claim to fame, but even before DC’s lesbian superheroine was created, Williams was wowing audiences with his dazzling layouts and composition on titles such as “Chase” and “Desolation Jones.” If you think you have seen Williams’s most astounding art and have not read “Promethea,” though, you might want to reconsider. You get what is always expected — new and inventive panel layouts, exquisitely designed frames, and storytelling that is so smooth and easy that it is nigh impossible to get lost in the otherwise labyrinthine cobwebs of panels. All of this is top-notch, and at least on par with Williams’s most well known works. But with this series, Williams goes even further. Take, for example, the aforementioned Tree of Life arc: as mentioned earlier, each issue involves a different sphere on the Tree, according to the Hermetic Qubalah, and, to reflect this, Williams adopts a different artistic style to fit in; one issue, he will be imitating impressionistic painting, while in another he will mimic the work of 19th century woodcutters. Later in the series, as it approaches its conclusion, Williams starts throwing an assortment of different styles and techniques together, such as collaging, in order to craft the chaotic landscape of a reality torn. Williams’s finest accomplishment, however, is the final issue of the series, one which folds out into a two-sided poster where multiple smaller images of Promethea form two larger images, one on each side. While the issue technically does not tell a story through comics, in the traditional sense, it is still technically sequential art: one Promethea leads to the next, who leads to the next, and so on and so forth. It is something only a few could dream of, and only the combined talents of Williams and Moore could actually create.

These days, the popular view of Alan Moore is as a cranky old man, as out of touch with the current state of the comic market as he with reality in general. Frequently, jokes are made at Moore’s expense involving his views on magic and the supernatural — and, often, his beard. Often, however, most of these jokes are based on faulty, or at least underinformed, claims and wild speculation, when there is absolutely no reason to guess. “Promethea,” along with being an engaging story, gives us a look into the mind of Moore, and spells out, letter by letter, what Moore means when he talks about magic and religion, and the relationship between the two. While, yes, Moore may come off as bitter in interviews regarding certain companies — and who can blame him? — but what he believes is nothing to make fun of; truly, it is one of the most beautiful visions of humanity and its potential power that has ever existed. Let us, for a moment, abandon all objectivity: I am not a religious man, and while I try to be open-minded toward others’ beliefs, I tend to lean more toward the skeptical side. Reading “Promethea,” though — in particular the penultimate issue — was perhaps the closest thing to a religious experience I have ever had. It is not something to be explained; it needs to be experienced. Moore’s vision of reality shared in “Promethea” may not be something I wholeheartedly believe in, but, more than Christianity, more than Judaism, more than Buddhism, something I wish I could believe in — perhaps even something I believe in, but only to a certain degree. But, hey, if comic fans would rather make false accusations about Moore’s beliefs instead of reading a masterfullly crafted comic that lays them all on the table, that is their perogative.

Collections of “Promethea” are slowly going out of print, but not so much so that you will have trouble assembling the entire series even after visiting multiple comic shops and bookstores in your area. “Promethea” can be found in either five paperbacks or three Absolute editions, and if there was ever a series to buy the Absolute collections for, it is this one. J. H. Williams’s art sings no matter the size and format, but there is something incredibly fulfilling about having a massive copy of his art to drool over. Be sure to pick up each collection before they are all out of print, or you will miss out on what is easily one of the finest comics either of these brilliant creators have ever made.