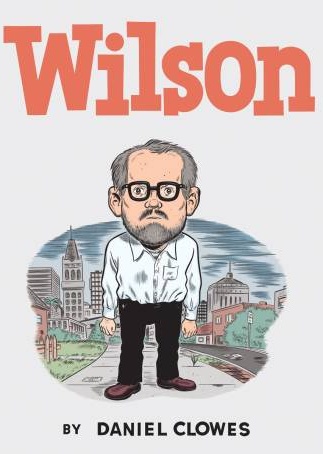 During my time in the comics wilderness (also known as high school and immediately post college), there were very illustrated works that I would pick up on a lark and re-read. Partly due to business (post college), partly due to trying to be “cool” (high school), I just left the world of sequential art behind, to find joy in other media.

Except for one book.

Ghost World, collected by Fantographics in my freshmen year of high school, was my only tether to the comics world for a number of years, and I read and re-read that book many times over the course of my early life. When I first read it, I related to Enid and Rebecca – after all, I was a sarcastic, overly critical high school student, and wished I could be so above it all. As I went back to it as I grew older, I began to see the characters as flawed and silly (similar to how, when i re-read Catcher in the Rye as an adult, I found Holden Caufield to be obnoxious, where I once saw greatness), but I still loved the book. In fact, this might be the only collected comic I’ve ever re-purchased due to wear and tear.

As I got back into comics full force, I didn’t pick up Clowes’s work as frequently, partly because I kept waiting for a work of his to hit me with the same impact Ghost World did. The book had such an impact on me; partly, I’m sure, it was a case of right place/right time, but the other Clowes books I’d read just didn’t hit me the same way.

And then I read Wilson, and it hit me right in the gut.

Wilson, to quote the back cover, is “a big hearted slob, a lonesome bachelor, a devoted father and husband, an idiot, a sociopath, a delusional blowhard, a delicate flower, 100% Wilsonesque.” I would add “dog lover” to that list, but that basically describes Wilson pretty well. Almost all of that can be gleaned from the first page of the book: 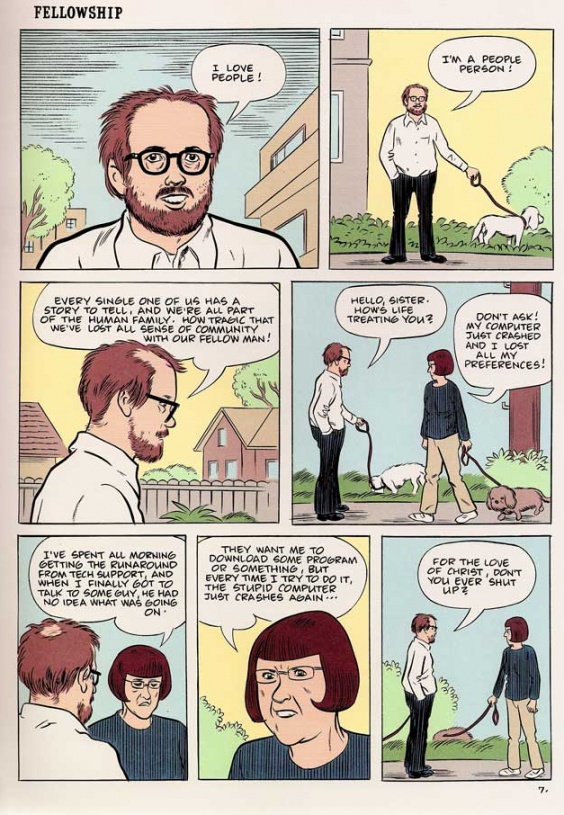 The entire book is made up of one-page strips like “Fellowship” above, and each features a self-contained vignette from Wilson’s life. There is an overall narrative to the story as well, and each strip leads into the next, sometimes following just seconds behind the predecessor, other times months or years have passed between. This format frees Clowes in both his writing and his illustration, to mix things up. Some pages are tiny digressions into the id of the main character; others are deeply important milestones in his life, and as varied as the tales are, so are the ways Clowes illustrates.

Different variations on realism, color scheme, and tone are executed with single-mindedness, benefitting from being able to style each scene exactly as Clowes sees fit. This may sound like it is jarring, or doesn’t produce a consistent product, but whether Clowes is doing a moody grey tone piece of realism or a Charles Schultz-y Crayola-esque romp, it still looks undeniably like Clowes. 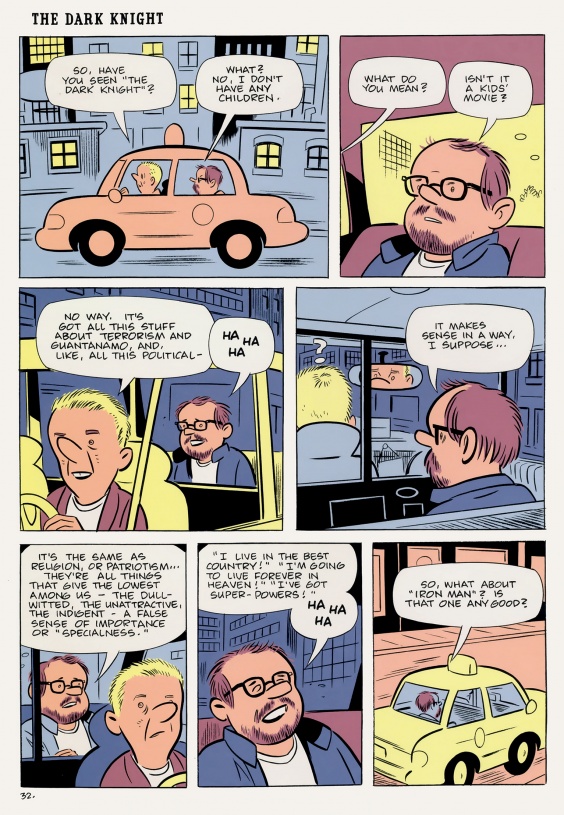 A main theme of the book is loss; Wilson, at various points, loses loved ones, his freedom, his patience and, seemingly, his mind. Wilson is divorced, and spends a good chunk of the book tracking down both his ex-wife and the daughter he never knew he had. To see a broken man like Wilson try to make sense of his marriage, build a relationship with his daughter, seek forgiveness and understanding from his ex-wife, is fascinating, especially because Wilson is so unwilling to do anything even approaching compromise. It appears that Wilson truly wants to be a good father and husband, but not if that means keeping his mouth shut or getting a good job.

But the most touching relationship in the book is the one between Wilson and his dog, Pepper. Pepper appears to be the one thing in his life that brings him joy and peace. In addition, he expects everyone else to feel the same way about her: 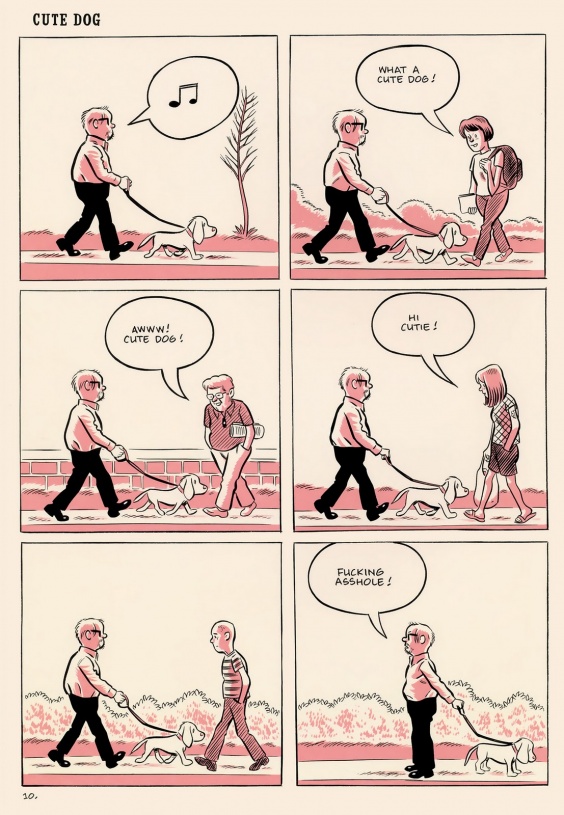 As an emphatic dog lover and dog owner, I completely understand Wilson’s love for Pepper, and have a less acerbic reaction to when people aren’t as gaga over my Lola as they should be. Don’t they see how loyal and cute she is? Fuckin’ cretins!

Pepper is also the source of the most pain in the book. Without spoiling too much, Wilson winds up leaving town for an extended period of time and drops Pepper off at a dogsitter’s. The anguish that Wilson feels being away from her, as well as what he finds when he comes home, are heartbreaking and touching. Pepper appears to be what tethers him to humanity, and when he isn’t with her, he becomes a much worse person, and seemingly doesn’t even notice.

Eventually, his grandson, with whom he can barely claim a relationship, sort of takes on the role of Pepper in his life. Although he lives far away, doesn’t particularly want a relationship with his grandfather, he gets Wilson to care about something – hell, he even buys a Thomas the Tank Engine toy to relate to him! The innocence of both a 4 year old and a dog are the only things that seem to speak to Wilson. Maybe he isn’t quite a sociopath; maybe he just wants to make the world safer for the innocent.

Clowes manages to create such a rich, damaged, funny, touching and, ultimately, inspiring character in Wilson, despite only having him show occasional signs of decency. But it is in the honesty and rawness of the character that his grace appears. In fact, buried underneath the crass exterior, Wilson can also exhibit some true wisdom. See below, in one of the most well-stated descriptions of marriage I’ve ever read. 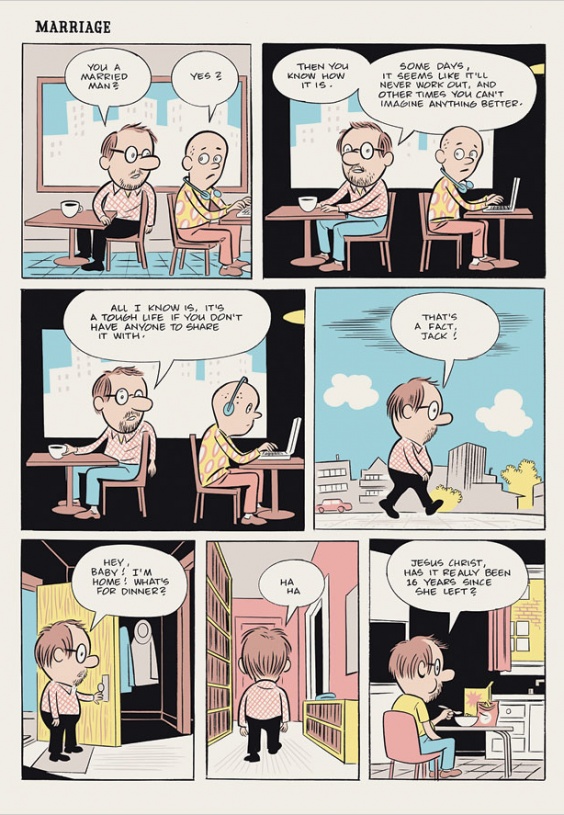 Ultimately, the book manages to, in 77 strips, give a truthful, painful, hilarious view into the path from middle to old age. Even for a relative young ‘in like me, this meditation on later in life has stuck with me immensely, and has become the new Clowes book that I pick up every few months for a quick hit of Wilson. Throughout his life, despite all his terrible ideas, his crass demeanor and his sour attitude, Wilson ultimately is searching for love, companionship, and understanding. Aren’t we all?