Over the past month, there have been countless articles looking back at events from the past year, and almost as many focused on the past decade. Why stop there? This column continues to look back as far as necessary to find interesting events in comics history. This time around, we start by diving back 108 years before concluding in 1992. 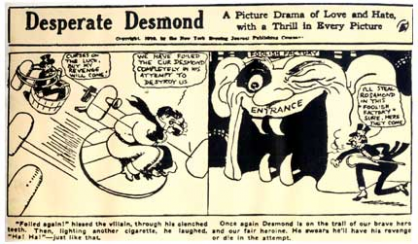 January 31, 1912
Before comics were published in books or stapled pamphlets, they found success in newspapers. I’ve told you about one of the first comics strips before, and how its positive impact on circulation was noticed immediately. Despite the undeniable appeal, newspapers across the country inexplicably took a “less is more” approach and kept comics limited to scattered locations and schedules for almost 20 years. The name of the game was variety, not ongoing stories or brands.

That’s why the Wednesday, January 31, 1912, edition of the “New York Evening Journal” became part of comics history when it featured the first daily comics page. Unlike the modern comics page with up to 30 comic strips packed to sheet, the original comics page only had four large strips. Notably, it was the same four strips every day, including the “Desperate Desmond” strip shown above by Harry Hershfield. The content grew slowly, edging its way up to nine strips in the 1920s.

Of course, the debut was only a test run. The “Evening Journal” was part of William Randolph Hearst’s newspaper empire, and the comics page began appearing in his other afternoon papers within a few days. Other publishers followed suit, and it wasn’t long before the daily comics page was an American staple. 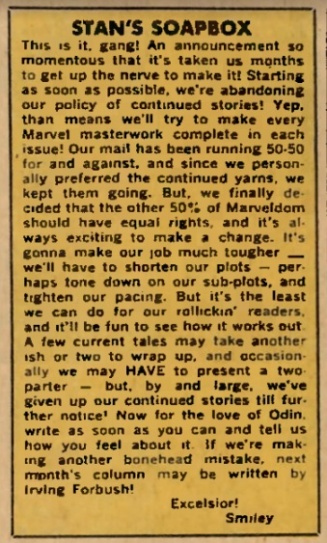 January 1970 (cover date)
For nearly ten years, on of the major appeals of Marvel Comics was the soap opera element that came through continuing stories. Despite near-constant recaps, readers who missed an issue really felt like they missed an issue. Similarly, cliffhanger endings also gave readers a reason to anticipate the next installment. It was a unique element at the time, a stark contrast to the done-in-ones from DC that had minimal carry-over continuity between issues.

In issues cover dated September 1969, Stan Lee used his soapbox to announce that only half the mail they received supported this type of storytelling, and that effective a few months hence, all Marvels would be limited to single-issue stories with continued stories being rare exceptions. Creators wrapped up whatever lingering plots they had, and most made the format transition beginning with issues cover dated January 1970. Creators found it limiting, and some skirted the guideline and kept doing continuing stories anyway. Readers found it to be a frustrating step backward and wrote in en masse. The plan was formally abandoned in Stan’s Soapbox appearing in issues cover dated December 1970. 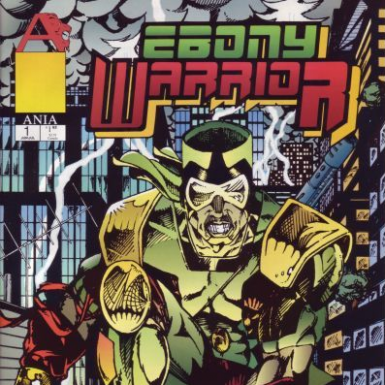 January 1993
In the early 1990s, there was a paucity of minority characters in comics, and the ones that existed were mostly seen as caricatures instead of characters. To rectify this, six geographically-scattered small/self-publishers teamed up to present accurate portrayals with added authenticity derived from minority creators. Separately, Afro Centric Comic Books, Hype Comics, Up Comics, Dark Zulu Lies, Africa Rising, and Omega 7 had been publishing underground comics mostly limited to black-oriented bookstores. When they formally merged into ANIA in January 1993, they gained mainstream attention and worked out deals to get their work into the direct market and onto newsstands.

According to some contemporary coverage, ANIA was a meaningless name chosen because it would get their products into the front of the alphabetical distributor catalogs. A few sources reported that it was a Swahili word for “protect and defend”. I’m not fluent in Swahili myself, but Google translate doesn’t recognize it. I’m inclined to believe the claim that it’s meaningless, or at least that any meaning is more private.

The coalition received lots of press coverage, including a CNN special, before they released any comics. Nearly all the coverage compared and contrasted ANIA with Milestone, the other black-led and minority-focused publisher who formed at nearly the same time. While Milestone was mostly fine with a live-and-let-live policy, ANIA often attacked Milestone for their distribution deal with DC, for their mainstream approach to superhero comics, and for not being “black enough”.

In the end, ANIA fizzled from a lack of follow-through and bad publicity. Few of their ongoing series lasted beyond the first issue (“Ebony Warrior”, shown above, did have a second issue). Writer Nabile P Hage, who had operated independently as Dark Zulu Lies, stood outside on a third floor ledge on the Georgia Capital Building in costume and tossed copies of his “Zwanna: Son of Zulu” comic to onlookers until he was arrested. This event, combined with the sexist, homophobic, and racist content of his comic, became the public face of ANIA until he left the group.