On the first Monday of each month, this column examines historical events from the comic industry with a thematic connection to that particular month. For March 2020, those events are the last protocomic, DC’s first in-house promo page, and the travesty of Marvel Mart. 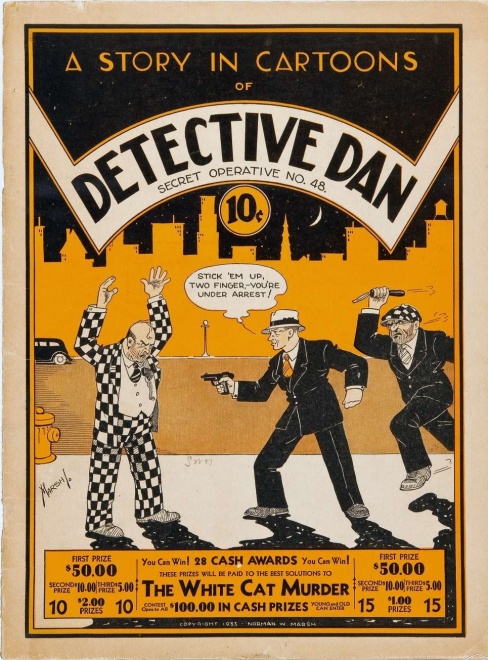 March 1933
1933 was a big year for comics – it was the year the Eastern Color Printing Company created the promotional giveaway “Funnies on Parade” that is now considered to be the first modern comic book. That phrase, first modern comic book, naturally implies there were precursors. The Overstreet Price Guide labels these “pre-modern” comics as the Victorian and Platinum ages. Wikipedia and some historians call them protocomics. As it happens, the last protocomic was published in March 1933. (Any non-standard comics published after “Funnies on Parade” would be just that – non-standard.)

Aspiring cartoonist Norman Marsh took unsold samples of his comic strip “Detective Dan” had them printed as a tabloid magazine (10 inch by 13 inch) for newsstand distribution. The nature of his self-funded operation meant he received limited distribution that likely didn’t extend beyond the Midwest. The booklet, titled “Detective Dan, Secret Op 48”, held 36 pages between its cardboard covers. Although influential among creators in the early industry, it was not successful enough to sustain itself and there was no second issue. 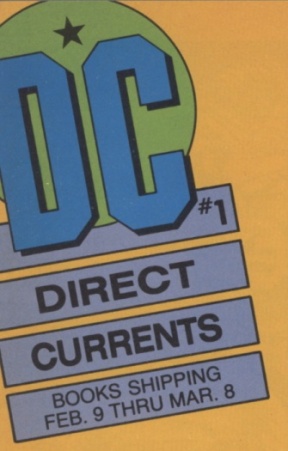 March 1966
The Marvel Age was well underway by the mid 1960s. Even though DC was still the top publisher, they were feeling pressure as Marvel’s sales rose. Management held meetings to discuss how they could mimic Marvel’s success, but they were unable to understand the appeal. They studied Marvel’s covers, assuming that must be the key. Eventually, someone had the bright idea to try imitating the inimitable Stan Lee’s bullpen bulletin page. The first edition of Direct Currents hit in comics cover dated March 1966.

Direct Currents failed for several reasons, but primarily because DC saw their readers as children without taste. They still believed covers sold comics better than their interiors. They didn’t believe readers wanted continuity between issues, nor any deep characterization. Combine those elements with a corporate culture that chafes at promoting creators and it becomes nearly impossible to generate hype for a comic.

Nevertheless, Direct Currents limped on for ten years until it was replaced by The Daily Planet, a newspaper-themed page that discussed upcoming comics from an in-universe point of view. 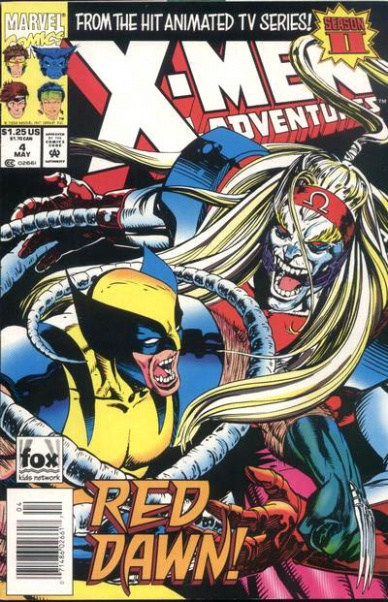 March 1994
Marvel had a lot of bad ideas in the early 1990s: cover gimmicks, market flooding, acquisitions of non-comic businesses, and Marvelution, for example. But everyone always mentions those. In 1994, Marvel made a blunder that’s often overlooked because, unlike the others listed above, they were able to undo it before any permanent damage was done.

The idea was Marvel Mart – a direct-to-customer mail order catalog offering readers access to titles they might not be able to locate otherwise. It was intended for the newsstand audience who did not have a local comic shop where they could find direct market exclusives. In some cases, it could even offer back issues of overprinted titles. On paper, it was a fine idea.

But! Before it got started, someone thought Marvel Mart would be more enticing if it offered exclusive merchandise, too. Which was still sort of fine. But! Some direct market retailers and distributors noticed the catalog was offering back issues that were sold out at the distribution level. Marvel was holding back product from the wholesale market so they could make more profit by retailing it themselves. Which was much less fine. But! It was still aimed at the newsstand market, so it shouldn’t eat into the direct market too much.

You know, unless Marvel were to slip an ad for it into a direct market edition of a comic. Like they did with “X-Men Adventures” Vol 2 #4, which shipped in March 1994.

One regional distributor, Comics Unlimited, used its newsletter to bring all of the above to the attention of retailers and cautioned them to reduce the importance of Marvel in their stores to protect themselves. In response, Marvel first promised never to advertise Marvel Mart in a direct edition again, then scrapped the whole idea. It also retaliated by cutting ties with Comics Unlimited, destroying the distributor’s competitiveness. Diamond acquired Comics Unlimited’s assets four months later.