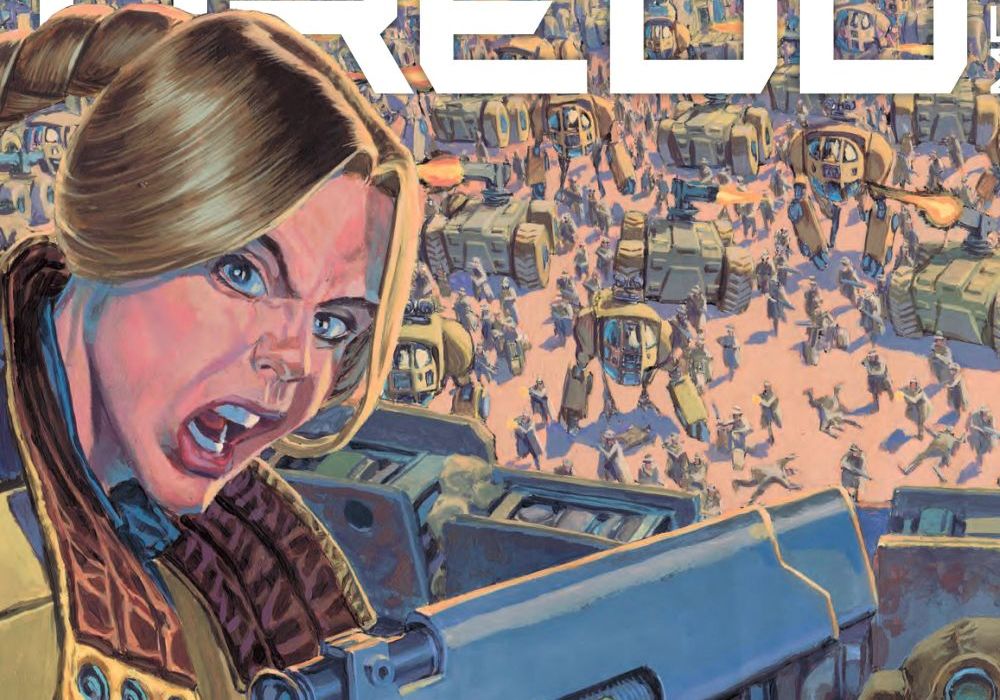 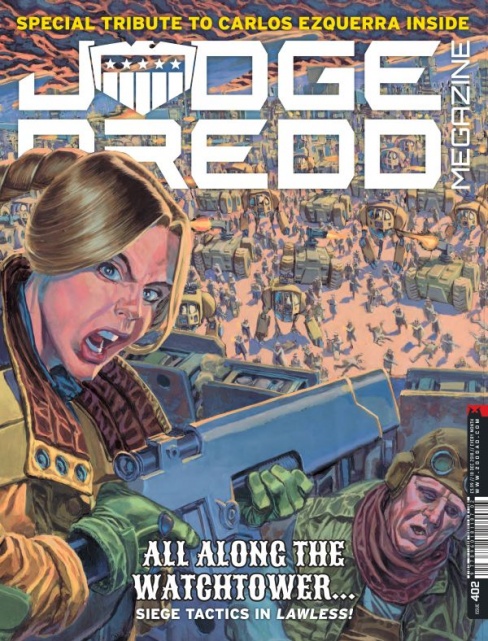 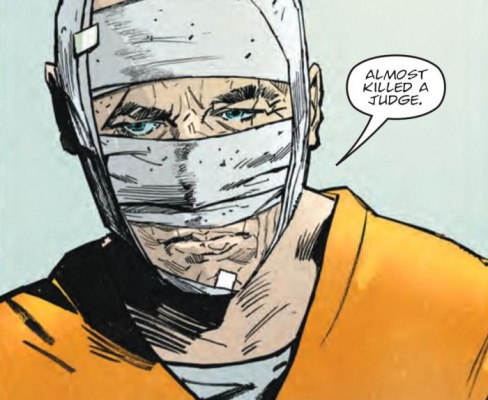 Tom Shapira: I just can’t seem to connect to Alex De Campi’s Judge Dredd stuff; it seems like the kind of the material I ought to love – inspired by classic violent cinema (the title of this story seems to be an homage to Don Siegel’s “Riot in Cell Block 11”) and offering the right mix of action and social satire. Except there isn’t any satire, it’s just a straightforward punch’em piece, with a mystery that is mostly devoid of surprises and couple of twists that are not really shocking.

And it’s a shame because all right ingredients are there, Nick Charter does a nice mean and dirty Dredd which rather reminds me of earlier Henry Flint (though Chater is a bit stiffer in his poses and actions), but they don’t form into a cohesive whole. The idea of doing an episode inside the infamous Iso-Block is a good one, we tend to see them only when a major villain escapes, an excellent chance to examine the notoriously problematic prison-politics in the USA; there are hints towards that, the prisoners are used like chattel for financial benefits and once imprisoned the system doesn’t really do anything to care for them, but it is not explored thoroughly enough to be clever and the action is not constant enough to offer grim satisfaction. Instead this short falls somewhere in between; this story probably needed more than one chapter to explore these themes, the end result is unfortunately rushed. 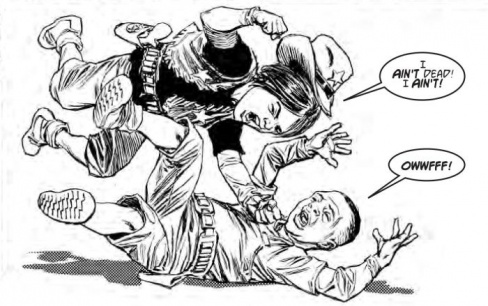 Kent Falkenberg: After the grim, apocalyptic vistas that scoured these pages last month, it’s bold move by Dan Abnett and Phil Winslade to open ‘Ashes to Ashes, Part 3′ with a pair of children playing sheriffs and bandits. Bold, and a bit jarring, given the scene’s air of innocence and frivolity.

But the childish game of shoot ’em up marks a masterful transition. One kid’s emphatic admonishes of “I ain’t dead. I ain’t,” brings the scene back from the past to show us Rondo, chest splayed open on a surgeons’ gurney, weakly reiterating the same words. It’s a fanastic, humanizing moment that shows just how efficient Abnett can be when he’s writing at the top of his game.

In fact, in between Windslade’s maximalist panorama’s of the Badrock citizenry making their last stand atop a crumbling wall, ‘Ashes to Ashes, Part 3’ might be the chapter in this saga which shows the most heart. While the cavalry of Zhin’hal warriors suddenly riding in to at least momentarily break Munce’s ranks reeks a bit of enemy-of-my-enemy expediency, it does provide a nice moment of spectacle in contrast to the strips quieter moments.

The strip continually checks back to the medical droid tending to Rondo’s wounds – and those of the multitudinous other casualties. And in extreme exhaustion, and after a particularly human display of self-sacrifice, the droid allows itself to steal of few seconds of rest as it slumps into a chair. Winslade, who so often packs his panels with every detail imaginable, keeps the background empty this time. The stark, barren backdrop lets the gravity of the moment and weight of the sacrifice sink in that much deeper.

‘Ashes to Ashes, Part 3’ is a wonderful continuation of this arc. But it’s all the more engrossing for some of the subtler shades, which show just how masterful Dan Abnett and Phil Winslade can be at their craft.

Greg Lincoln: Chapter three of “Storm Warning” shows us just how capable a Judge Lillian Storm is. Her encounters in the “The End of the World” pub show her to be almost a stereotype of British unflappability as she deals with annoyances both physical and ghostly. Lillian Storm calmly proves herself up to the task of dealing with surly spirits. Moore and Reppion story does not tell you what Lillian may have done to the abrasive ghost, Rose Matthews, but given the reaction Broxton shows getting “Barred” is something none of the rest of the spirits want. Beyond encountering the possessed body of the spirit she’s trying to help much of what transpires in the pub is atmospheric in every sense of the word. Much of the “dialogue” in this part beyond threats and posturing traded back and forth comes from what must a snooker or pool show on the telly.

Jimmy Broxton’s art in this part compared to the last one seems much more hazy and scratchy in places. It really seems to be something of a homage to the early “Hellblazer” and “Swamp Thing” stories. The backgrounds are a little less interesting then last month, but they do create a good atmosphere for what amounts to a bar fight is not a fully physical one. It’s refreshing that Broxton does not objectify Lillian Storm’s body in the way that back in the eighties and nineties she might have been. She may posture or pose a bit but it does not come off as alluring. Overall a good continuation if one a bit thin on development. 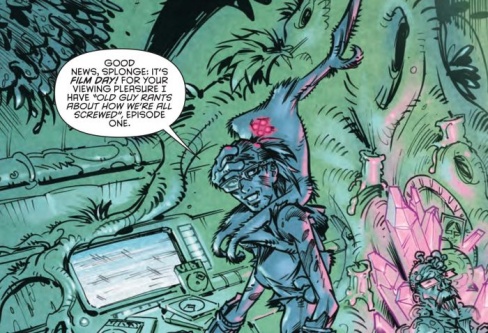 Rowan Grover: The action is heightened whilst the world is suitable deepened in part three of “Blunt II”. Keeping in tone with the dark, aware humour, Eglington introduces us to this part in a neat little piece of meta commentary, with one of the characters saying “For your viewing pleasure I have “Old guy rants about how we’re all screwed”, episode one”. We’re only drip feed a little bit of information about the world, and that its ecosystem is alive and self-aware, but Eglington witholds any more to keep the mystery enticing. Eglington also lays hard on the racial tension metaphor in this, with the planet natives going after Blunt, and especially by calling him ‘apeman’. It’s a little hamfisted but it works at conveying its message of intolerance, and leads to some solid action and plot development.

Boo Cook provides nice textured brush style art here as usual. The background work is fantastic from the get-go, with Cook intertwining natural and technological aspects of the scenery to create something exotic and unnatural. I love that the “old guy” who rants from the first scene is inconspicuously drawn into the background, shown with fungus sprawling over him, it works as a nice touch explaining what happened to him without directly addressing it in the dialogue. The vivid fauna amidst the canyon-like arid lanscape on the next page does wonders for worldbuilding the planet too, creating an interestingly juxtaposed ecosystem for the book. Cook does some good work with page structure on the next page, especially with the show of Blunt on the cliff spiralling down the border of the page, but the action feels a little unrefined and brushy, coming off as somewhat unfinished looking.

“Blunt II” seems to be in a good place for unfolding its vivid world and telling its story about co-existing on an alien planet. Eglinton is infusing the story with clever wit, and Cook makes some wonderful flourishes on the background work. 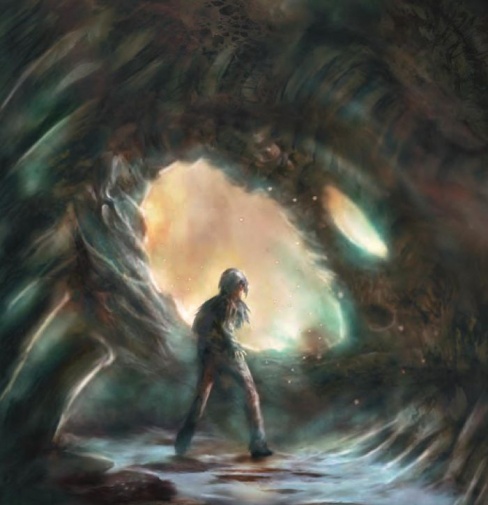 Michael Mazzacane: The issues I had last month with this strip persist as Nick Percival’s technically sound art doesn’t move me emotionally as the Dark Judges have a Judgement Run. There is better cohesion with David Hine’s scripting this time around, a bit of narration at the start of things helps to give this literary inclined strip something extra. This literary interest also gives the strip a chance to say the title, which is a moment that is often seen as tongue-in-cheek is actually quite horrifying.

Despite the twisted version of a Running Man forming the core of the strip, Percival’s art lacks the sense of energy you’d get from a group of prisoners running for their lives. The best overall sequential piece of storytelling in this strip is four panel sequence as a man falls to his death in a trap set by Judge Mortis. The four vertical panels are spaced close together and lack the blocky largess of others on the strip. They flow together beautifully to show this poor saps life being sucked out of him.

Overall I think the issue with this strip is Percival’s page design. Most pages operate in a 5-6 panel range which isn’t a lot. It lets them go big and make some exquisite close ups of the judges, or emphasize the destitute nature of the environment, but not a lot seems to happen in or between them. There isn’t much flow panel to panel which makes the third addition of ‘The Torture Garden’ read as stilted. Individually there are panels that work as pictures, they just lack the connective tissue that pushes and pulls the skeleton of narrative. 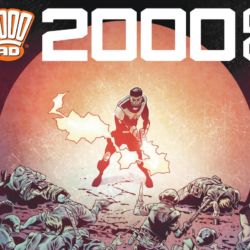 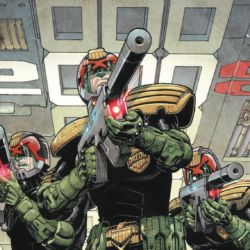 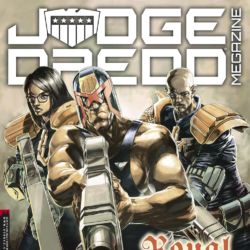 Welcome, Earthlets, to Multiver-City One, our monthly look at the “Judge Dredd Megazine!” Let’s get right to it.Judge Dredd: Regicide, Part 2Credits: Arthur Wyatt (Script), Jake Lynch (Art), Jim Boswell (Colors), Annie Parkhouse (Letters)Christopher Egan: The siege continues in the finale of “Regicide” and Dredd is still running around in his skivvies. There are a […]