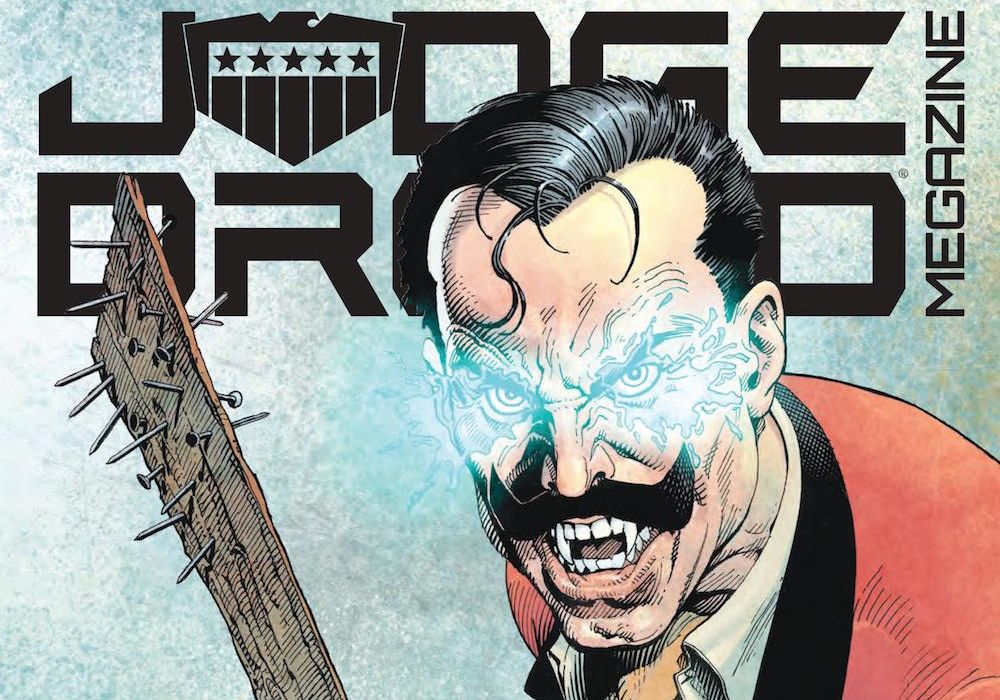 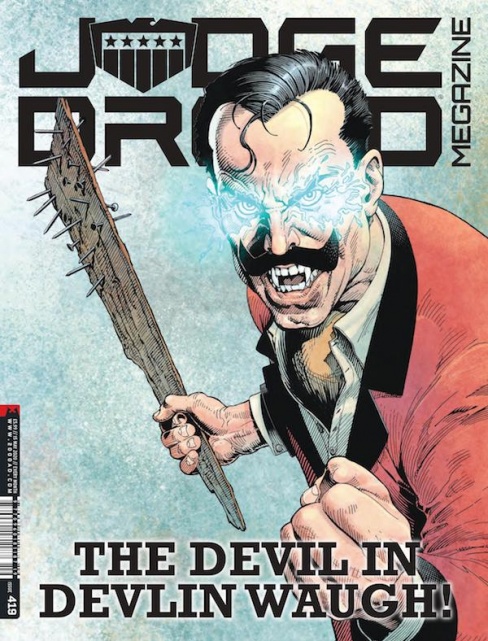 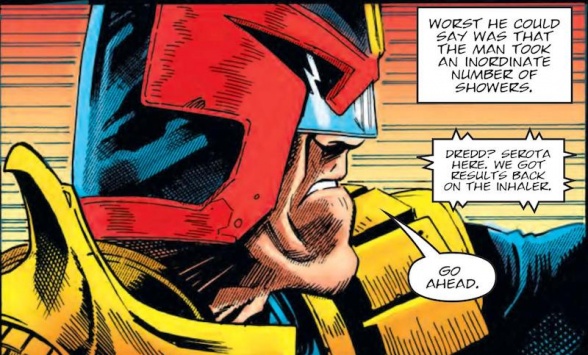 Brian Salvatore: Judge Caliban, the crooked Judge at the heart of ‘Bad Sector,’ is a wonderful example of how a trope can still be interesting and feel vital. We’ve all seen/read crooked cop stories before, but the combination of Wyatt’s script, which highlights the increasingly limited choices Caliban has, and Holden’s art, which shows knowledge of the walls closing in around him on Caliban’s face leads to the strip feeling as tense and exciting as the best stories of this ilk. This chapter is like watching a trash compactor slowly close in on Caliban, and even though he’s trying his best to survive, somehow he knows this will be the end of him.

But like all the best Dredd stories, this also has a tough moral choice at heart of it, which is the remaking of the titular sector. It is easy to see, in a vacuum, how tearing down slums and rebuilding is a good thing for a city. But the residents call it home, and they are protesting this action. It is their protests that allow Caliban, whose role in the drug trade is part of the reason the sector is so dire, to escape. It’s a surprisingly nuanced bit of plotting, and Wyatt nails it perfectly. His script, with its repetition of phrases and spare dialogue, is incredibly effective in setting this stage.

But I’m a PJ Holden stan, and this installment continues his showing the horrifying effects of the Grubb’s disease, as well as showing how the drug culled from the disease has damaged the entire sector. Like the flowers growing all over the bodies of the infected, the rot is spreading all over the city, both physically and intellectually. This is a truly great Dredd story, and keeps getting better and better. 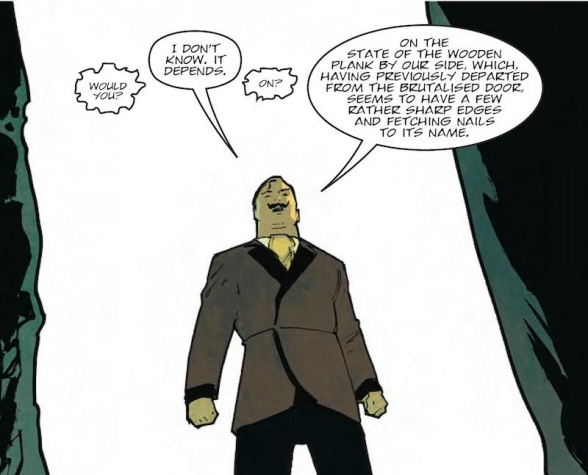 Gustavo S. Lodi: With gears fully shifted into terror territory, ‘A Very Large Splash’ can have its full attention to plot, but without losing sight of the smart dialogue and charisma-filled characters. This series keeps getting better and does not lose its pace.

There is something to be said about the art style, provided by Mike Dowling. He pays a special attention to Devin, which almost look larger than life and standing out (visually literally) form the page. He is as much of the worlds he inhabits as he is removed from it, from an artistic perspective. He is just slightly less realistic than the rest, his facial expression just a tad distorted. It really makes for some very interesting reading.

On this fifth chapter, the story is on an accelerated pace, with a lot of action taking the center stage from the mood-setting chapters that preceded it. With little reveals to be made until the end – save perhaps for the visual representation of the story’s big bad – most of these pages are dynamic battles.

All in all, “Devin Waugh” is an excellent series, which not content on delivering a very charismatic lead, takes him through the ringer on very compelling adventures.

Rowan Grover: The plot is speeding right ahead leaving little in the way of mystery, and it’s surprisingly working for the better! On the very first page, Blunt is forced to reveal that not all is what it seemed to be on Getri-1, which his refreshing rather than Eglington dragging out the will-they-wont-they story for too long. It also consolidates the human side back into one alliance, albeit still with some discourse to keep things interesting. Marshal Lamb keeps this tension well-formed as he seems to be constantly suspicious of Blunt and the other survivors. There’s also seems to be a siege forming with the Zhind mutate at the head of everything, showing that the plot is malleable enough to change genres at a whim. However, the pacing slows down somewhat when we get to the scene with Conrad, which is basically three long pages of exposition that while interesting, makes the journey to the end of the prog a lot more of a slog.

Boo Cook does solid work as usual, although some of his designs and poses feel a little sloppy at stages. The folds and creases on Marshal Lamb’s uniform make it look like his back is facing towards the camera, yet his head still pokes out awkwardly from the top of his neckline. This is continued pretty much through the prog, showing that Cook’s specialty is more tight-to-no clothing, as evident with the other characters of the story. That’s the only major issue here, however. The splash page featuring the Zhind mutate has a great amount of menacing detail that shows the beast as a growing, menacing threat. Even the pages of Conrad analyzing do tend to look interesting due to the old-school computer greens and grids that are used to layout the alien artifacts and DNA graphs.

“Blunt III” continues to evolve and remains interesting. The art flounders in some areas, but remains pretty consistent overall, giving this book a truly unique style amongst the rest of the Megazine lineup. 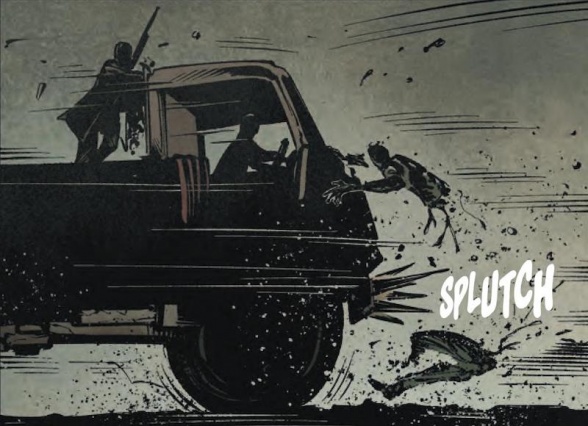 Michael Mazzacane: ‘Last Rites’ continues to progress nicely. As with previous strips the aim of this episode is clear: get the truck to the ledge so they can take the shot and kill the summoner. As always Roberson and Mutti’s project have two unwritten and underlying rules: survive and make everything as tense as possible.

In previous strips Mutti created the tension by playing off the environment. The second part of ‘Army’ was all about the wide open space giving the readers plenty of space to see the unkillable horde of zombies encroaching on the squad. This was twisted in the third part of the strip as the squad made it in doors and zombies were felt more than they were seen as things became claustrophobic. For this fourth part Mutti finds a bit of a fusion between the two through creating purposefully limiting page designs that ironically take place primarily in open space. Early page design are meant to be read in an easy vertical line, an effortless move that helps to in crease the feeling of speed as the truck barrels through zombies like a old timey version of Dead Rising. This easy read is contrasted by the tension inside the truck as everyone is busy firing guns and kicking hitchhikers off.

Other than a few asides from the home team stuck at the barn, meant to relieve and create tension, that basic formula propels the strip. It is simple and effective. One part of the plan is achieved which sets things up to continue in the next Megazine. How Roberson composes this strip is a good example of how to have a serial plot and still make individual episodes feel satisfying. 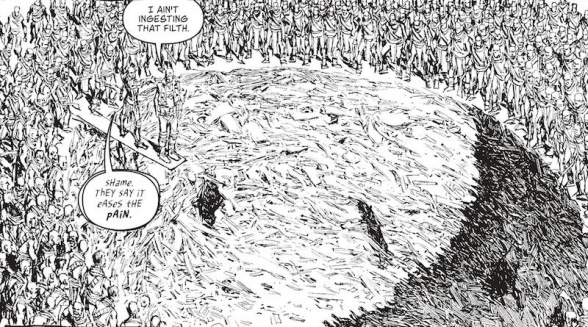 Matthew Blair: Things have finally come to a head in “Lawless: Boom Town” Part 5 and it is violent, gory, and explosive. The group of main good guys have come into contact with a group of radiation poisoned, crazed to the point insanity mercenaries who have made the wasteland their own personal playground and transformed it into a hellscape that would make the Mad Max villains proud.

“Lawless: Boom Town” Part 5 is a very action heavy portion of the story and, as a result, it doesn’t allow writer Dan Abnett to do a whole lot of character or plot development. However, it doesn’t really matter at this point because we’ve been building up towards something like this for the past month and it’s refreshing to see some of the pent up tension and smoldering anger get released. With that being said, there are still some great character moments in this part of the story which elevate it beyond simple mindless violence. Abnett gives several members of Lawson’s outnumbered posse some great emotional depth and guilt over being forced to kill their fellow man and makes the mindless bad guys a definite force to be reckoned with.

While the writing is good, the real star of the show in “Lawless: Boom Town” #5 is Phil Winslade’s art. The superb attention to detail allows the reader to process every hit, every stab, and every bullet fired and see how it affects the characters and the world around them. The evil mercenaries are a suitably terrifying mob of mindless savages who take and kill whatever they want with no inhibition and they look terrifying. The action is fast paced, brutal, and while it is really good it can be had to watch at times.

“Lawless: Boom Town” #5 is a knock down, bare knuckle brawl to the death between the rabid forces of chaos and the outnumbered but determined forces of order. It’s a satisfying payoff to a month’s worth of build up that will leave readers wanting to know who will survive, how they’ll survive, and what will happen next.