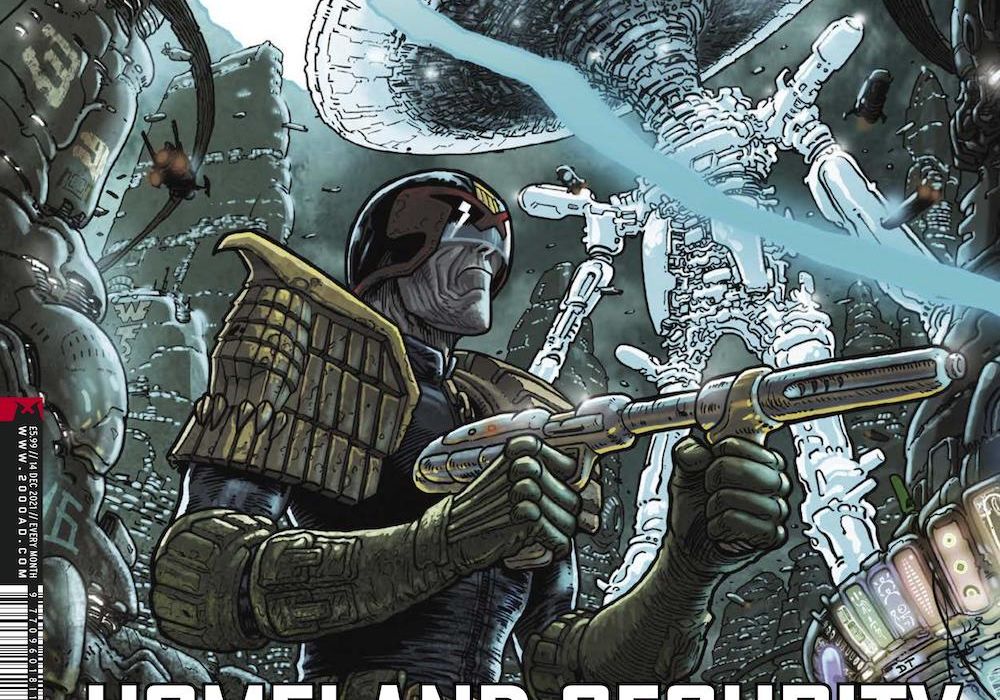 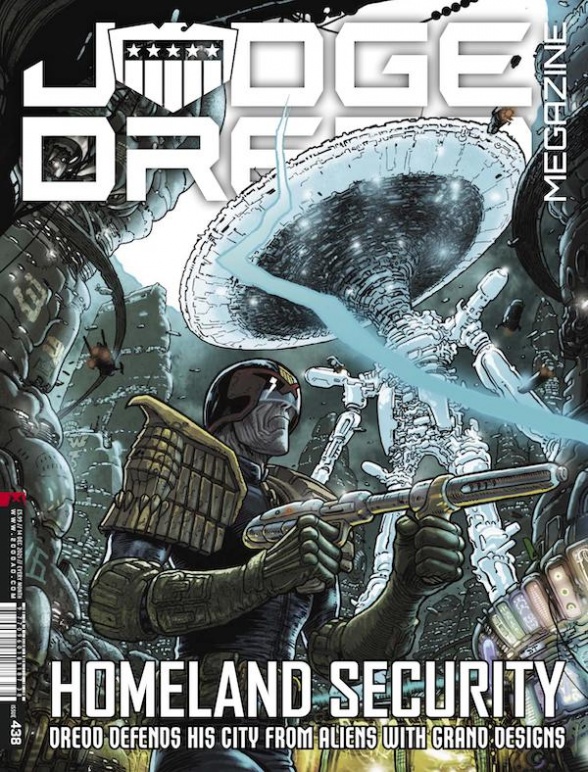 Christopher Egan: The beginning of this story feels like we’re going back to the early “Judge Dredd” era of the Robot Wars, and I really wish that had been the case by the end of the story. As giant machines are destroying entire blocks of Mega City One, Dredd and a battalion of Judges are doing their best to take down these invaders and get this fight over with quickly. Ian Edginton then takes us into a bizarre alien invasion/property development scam story that feels ripped from the pages of something like the “Hitchhiker’s Guide to the Galaxy” book series. Giant alien beings, having been conned out of a lot of money by a criminal Dredd has run into before, believe they have purchased Earth and its moon to do with what they please. It is very silly, mildly funny, but feels extremely out of place with Judge Dredd as the main character. It feels like something pitched for another 2000AD strip that got placed into this world. The writing is good, it is quick, quippy, and to the point.

A highlight is the interesting artwork from Dave Taylor, whose work looks akin to that of Frank Quitely’s. It is mildly cartoonish while keeping details heavily involved in its style. Everything is wrinkled, worn, stained, lived-in; and it is beautifully realized. It has its moments of surrealism and psychedelic adjacent styles and it does match the tone of the plot, while never straying far from the established look of this universe. It really looks great and I found myself scanning panels multiple times just soaking in the details.

It’s a fun story overall and it does move nicely, especially for the slightly longer format of a Megazine strip. 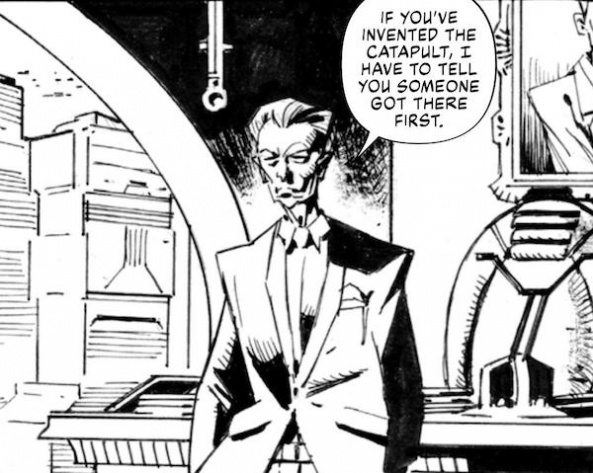 Matthew Blair: Deep in the Halls of Juice, away from the prying eyes of everyday citizens, there is a place where some of Mega City One’s creepiest and most terrifying artifacts are put on display for Judges to study and learn. It is known as the Black Museum and it’s undead guide Henry Dubble would like to show you around.

Today, the story follows Hugo Morgandorf, the son of Dexter Morgandorf, who happens to be the CEO of one of Mega City One’s most powerful weapons manufacturers. Hugo is desperate to assume his rightful place as CEO of his family’s company, but his father refuses to give him more responsibility. However, when a Tek Judge friend of Hugo’s named Isla develops a way to create a temporary clone of oneself, Hugo’s mind quickly turns to murder.

“Tales from the Black Museum Double Jeopardy” is written by Paul Starkey, who spends less time focusing on horror and more time on intrigue and backstabbing. Starkey does a very good job of fleshing out the characters and showing how a powerful idea can corrupt an already desperate mind. On top of that Starkey does a very good job of making Isla a great character and a very good Judge, capable at her job, but just human enough to be flawed and susceptible to her friend’s ideas.

The art for “Tales from the Black Museum Double Jeopardy” is provided by Nick Dyer. The story is told in black and white, and Dyer’s straight and angular style does a very good job of making the characters look sharp and menacing. On top of that, Dyer devotes quite a bit of time to the backgrounds of each panel and does a great job of making Mega City One look futuristic and high tech, but crowded and violent at the same time. It’s a great, quick look at the city and very effective for the story.

“Tales from the Black Museum Double Jeopardy” is a well written story about intrigue and murder with a solid twist at the end that solidifies the series place as a great comic horror anthology in the oldest and grandest tradition. 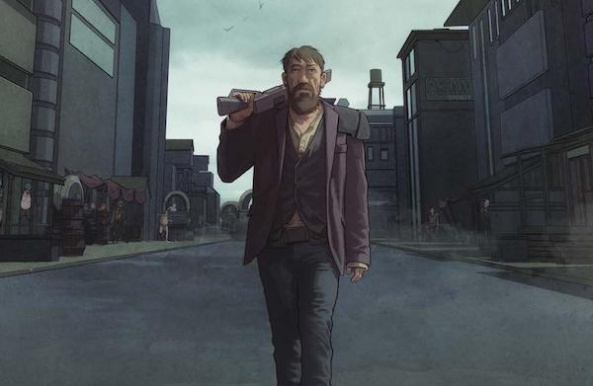 Brian Salvatore: As ‘Restitution’ wraps up, the shape of the story, as well as the wider “Angelic” tale, emerges quite clearly. I keep talking about how Western, in terms of genre, not location, this story is, and the finale of ‘Restitution’ does nothing to dissuade that tag. This final chapter furthers the ‘found family of survivors’ trope, but does so in a way that feels earned. This is a very satisfying conclusion, even if the entire story seems like a deep breath or a detour in the fuller “Angelic” story.

Lee Carter has to draw some pretty grisly characters in this chapter, but imbues each with an innocence that allows them to either be considered a ‘son’ to Angel or a tragic victim of circumstance. For instance, his ‘Dredd’ is more damaged and beaten down than any version of the Judge we’ve seen before. Sure, the massive jaw is still under the helmet, but that jaw is scarred and misshapen. This isn’t the Dredd, just a Dredd, and while Gordon Rennie and Carter make that clear, there’s some commentary about what happens when that helmet is put on.

Overall, this story concluded in a satisfying way, and allows the story to move on an an interesting, if expected, direction in the future. 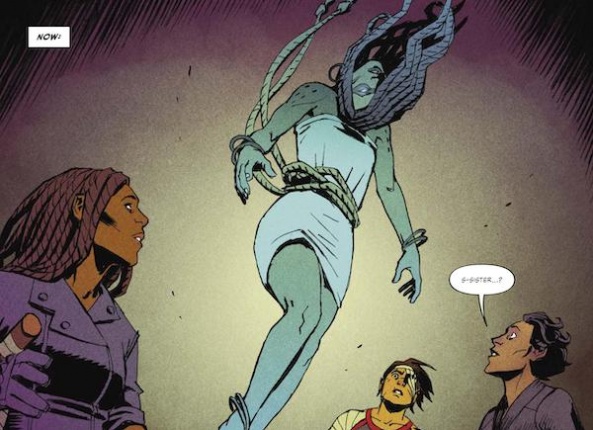 Michael Mazzacane: “Returners” comes to an end and in Dredd-verse fashion our trio of protagonists are judged. It has been a wild, perhaps overly long ride to get to this moment of judgement, but Si Spencer and Nicolo Assirelli do a good job leaning into the process as Minero, Correira, and Chavez are held to account.

Nicolo Assirelli pacing stands out in this episode as they design pages around motifs of mirroring and triptychs. The first page of this strip is a one-page stairway to hell showing each character’s failures, big and small, that led them to being cursed in the first place. The urban design of the page also stands out against the jungle setting of the arc overall and the new color palette it affords Eva De La Cruz, who replaces the variety of greens with maroons and browns. Even if you haven’t been reading this strip, Assirelli’s page design and how that informs the pacing and creation of an ethereal voice is worth looking at and dissecting.

The seventh entry in ‘Amazonia’ is a solemn affair with everyone coming to realize they have fallen well short of redemption, maybe. It’s a sort of gnawing feeling in the back of the mind, more a subconscious fear, that slowly comes across through the progression of Assirelli’s eye designs. Finally, a moment of shock as they discover what happened to Barrencourt and the subtle body horror it elicits.

How the judgement goes fits the characters and brings this series to a tidy close. The creative team don’t fall into an overly ambiguous ending, fates are left up in the air but there is simple and clean emotional closure. And with it the work of Si Spencer who passed away back in February an eerie send off to the writer. 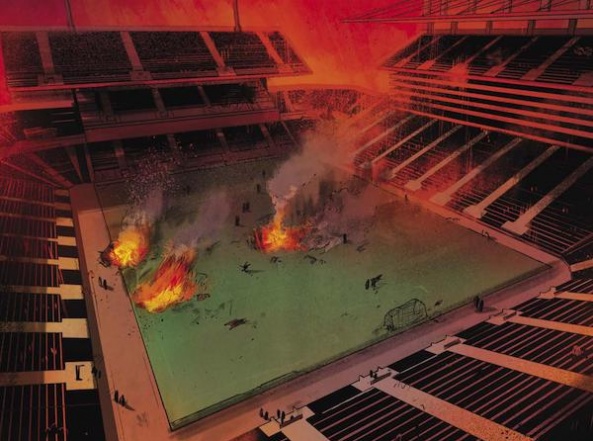 There’s almost no action outside of the first few pages, and even those images are really focused on Devlin’s less than celebratory reaction to winning. He’s now cursed by voices in his head, and his victory seems, at best, a hollow one, if not a disguised loss. This allows Dowling to draw less disfigurement and blood than this strip has previously afforded him. In its place he draws a distant, distracted Waugh, sapped of his swagger. This begs the question, “what is a depressed Devlin Waugh worth?” 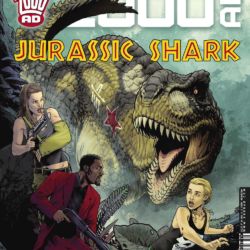 Welcome, Earthlets, to Multiver-City One, our “2000 AD” weekly review column! Every Wednesday we examine the latest offerings from Tharg and the droids over at Rebellion/2000 AD, the galaxy’s leading producers of Thrill-Power entertainment. Let’s get right to it!THIS WEEK IN 2000ADJudge Dredd: The Musical, Part 1 Credits: Rob Williams (Script), Chris Weston (Art), Gary […] 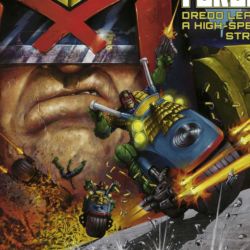 Welcome, Earthlets, to Multiver-City One, our “2000 AD” weekly review column! Every Wednesday we examine the latest offerings from Tharg and the droids over at Rebellion/2000 AD, the galaxy’s leading producers of Thrill-Power entertainment. Let’s get right to it!THIS WEEK IN 2000ADJudge Dredd: Tread Softly, Part 2 Credits: Mike Carroll(script), Simon Coleby (art), John Charles […] 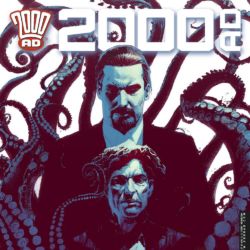 Welcome, Earthlets, to Multiver-City One, our “2000 AD” weekly review column! Every Wednesday we examine the latest offerings from Tharg and the droids over at Rebellion/2000 AD, the galaxy’s leading producers of Thrill-Power entertainment. Let’s get right to it!THIS WEEK IN 2000ADJudge Dredd: Tread softly, Part 1 Credits: Mike Carroll(script), Simon Coleby (art), John Charles […]