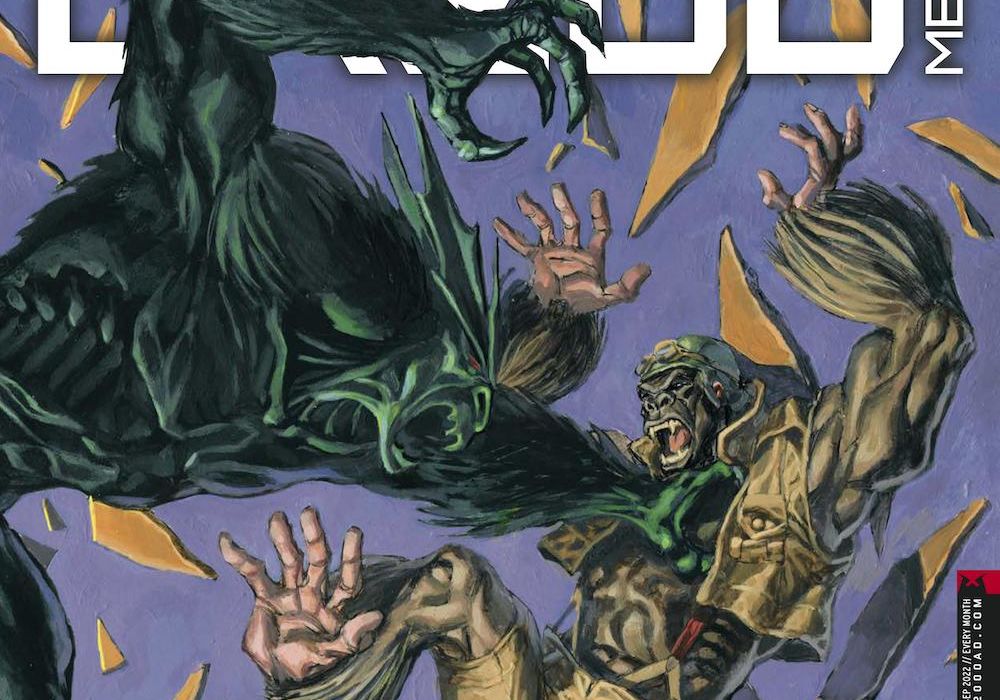 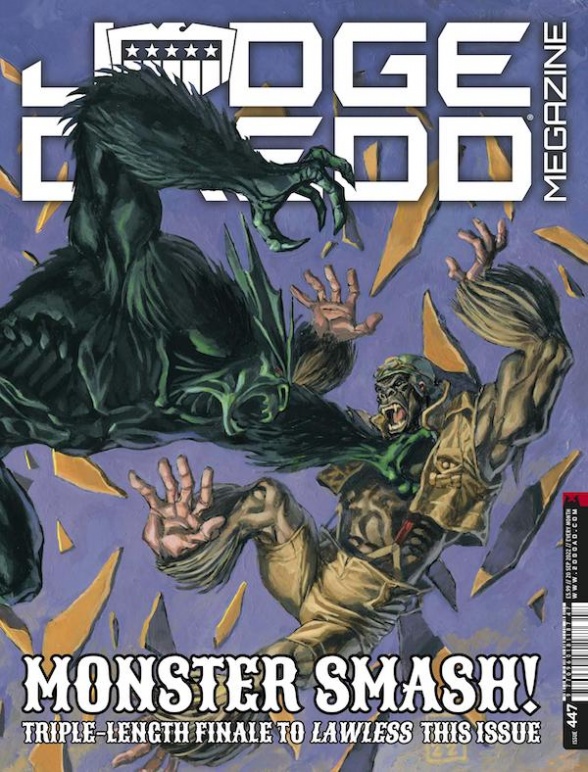 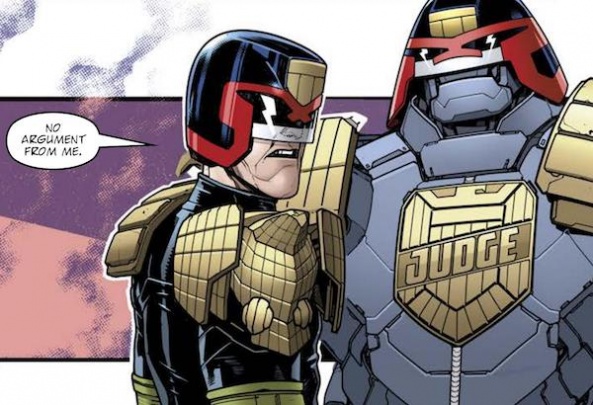 Christopher Egan: After raiding a Judge Death worshipping suicide cult, Judge Dredd finds a talking replica of the Death’s head. This sets him on an investigative path of discovery leading him into the world of collectibles and bizarre fandoms as he tries to unravel exactly what this cult was attempting to do, other than die.

The story by Ken Niemand is an enjoyable eye-winking mystery that places Dredd in a few different stores catering to collectors and fanatics. It’s a bit silly, but watching the Judge learn more about niche, spooky collectibles that takes us through some of the character’s history is a lot of fun. Fans of novelty shops will get a kick out the plot, but those unfamiliar with some of “Judge Dredd’s” long running canon will be lost on most of the references. Especially since the plot revolves around Judge Death, and to a lesser extent, the three other Dark Judges. Still, it’s a concise and purposefully written story that is clear and well executed from top to bottom.

A sleek looking strip with art by Neil Googe and colors by Gary Caldwell. It’s a beautifully drawn piece that perfectly captures the classic feel of this world while also being a completely current take on the character and Mega City One. It has a rounded cutesy style that is common in many a new comic book, but that doesn’t detract from it at all. It’s a great looking strip and the character designs only cater to the vibe of the whole thing. It’d brilliantly detailed and a joy to read. Caldwell brings his A game to coloring the story bringing the slick beauty to it and accentuating Googe’s finely detailed illustrations.

This was a blast to read and felt like an equal homage of and a poke at the old EC horror comics, even if the greatest threat was essentially expensive Halloween decor. There is one final twist at the end that is hopefully setting up a big threat in future tales, but it will probably be some time before that is fully realize. One of the best Megazine Dredd stories in quite a while and one that I would return to, especially if it ends up playing an important role in future stories. I highly recommend it for fans of the characters and lore. 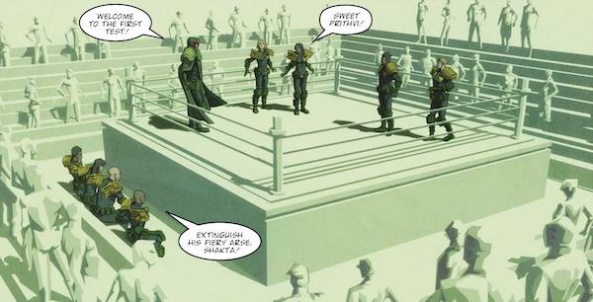 Brian Salvatore: In the interest of full disclosure, I must admit that our review copy of last month’s “Judge Dredd Megazine” #446 did not have the “Anderson, PSI Division” story in it, and therefore I have not read the middle chapter of this story, making the pieces a little tougher to string together than normal.

That said, this continues the flashback from the first chapter of Shenker and Anderson as young PSIs. The story here isn’t terribly interesting, and this has all the markings of a three-part story that is here to simply kill time until we get to #450. The art, by Lee Carter, is stiff and posed, with a washed out look that doesn’t add much excitement, even during times when there is supposed to be a lot of adrenaline and energy flowing.

The kicker is that Maura McHugh, in the first chapter, leads you to believe that this is the story of how Shenker leads the PSI division, but it isn’t that at all; it stops halfway through the story, allowing this dreadfully dull intermezzo to continue somewhere down the road. 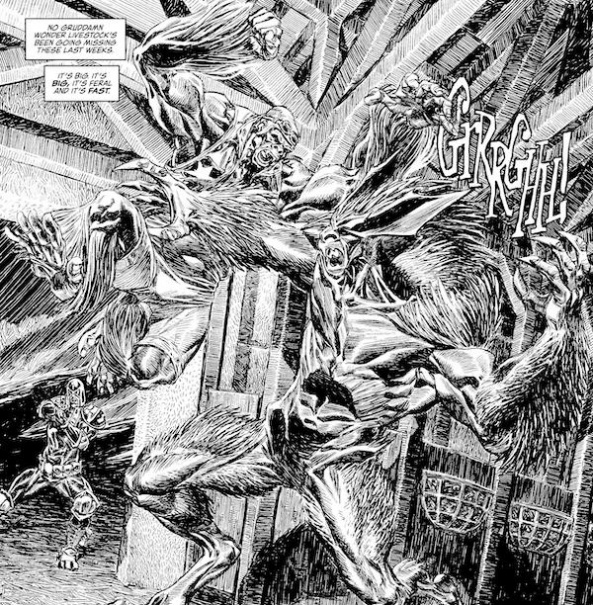 Matthew Blair: Ex Judge Metta Lawson and the town of Badrock are going away until next year, but that just means that we get an extra long finale to this story line filled with brutal character resolutions and a knock down, knuckle bruising, amazingly violent chase scene that stretches Metta to the breaking point.

SiInce “Ballots over Badrock Part 9” is so long, it really gives writer Dan Abnett a chance to stretch his creative talents and take his time crafting the finale, and boy does he deliver. Abnett devotes a massive amount of time to an extended chase sequence between Lawson and the corrupt Judges running the town. The chase is expertly paced and has everything from slow moments where characters grapple with what they’ve done, a clear sense of geography and movement, and very creative uses of space and objects that are both entertaining and brutal. It’s a very satisfying ending that leaves the audience wanting more. Also, it’s a great case study for people wanting to learn how to write better action scenes.

The great thing about an extra long finale like “Lawless: Ballots over Badrock Part 9” is that we get to see everything that makes Phil Winslade’s art fantastic, and everything that makes his art difficult, on full display. On the fantastic side we get to see Winslade close out the story in glorious fashion, with all the gorgeous pencils, exquisite inking that feels solid and delicate at the same time, painstaking background detail, and characters so well drawn they almost look photorealistic. On the other hand, there are more than a few places where the artwork can feel a bit crowded and jumbled, especially when it comes to the action scenes where it can be difficult to figure out what’s going on.

“Ballots over Badrock Part 9” is one hell of a finale to an excellent chapter in an excellent series. It’s got excitement, great character development, and amazing artwork and it will leave readers in the strange place of being satisfied while wanting more. 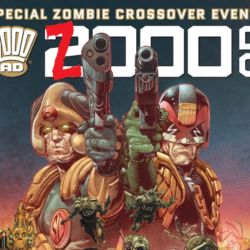