“Wire Mothers: Harry Harlow & the Science of Love” from Jim Ottaviani and Dylan Meconis is a shocking account of Harry Harlow’s experiments of the 1950s, and how they challenged the prevailing thinking on what “love” really was. 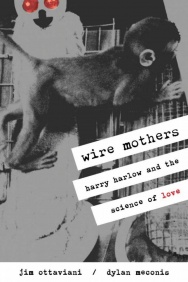 Psychologists know best, of course, and in the 1950s they warned parents about the dangers of too much love. Besides, what was “love” anyway? Just a convenient name for children seeking food and adults seeking sex. It took an outsider scientist to challenge it. When Harry Harlow began his experiments on mother love he was more than just an outside the mainstream, though. He was a deeply unhappy man who knew in his gut the truth about what love — and its absence — meant, and set about to prove it. His experiments and results shocked the world, and Wire Mothers & Inanimate Arms will shock you as well.

It’s early in the morning, hours before an important television appearance, when we encounter Harry Harlow in his office. He’s spilling over the side about his work to a janitor, and it’s speedy reading from there as we fall headlong into Harlow’s personal experiences and way of thinking.

We race through his career, find him trying to establish a place for himself, using humor to try to undercut the prejudice leveled against him for being Jewish. His troubles are numerous: he has a speech impediment; he’s scared of public speaking; he drinks; he suffers from depression; and his marriage is in trouble.

In the middle of it all, he’s deeply concerned by the prevailing discourse surrounding child-rearing. In an attempt to avoid passing germs to children, one particular school of thought has over-corrected, and concluded that mothers should touch their children as little as possible. Nursing has become the locus of attachment, with any other form of affection dismissed.

Harlow’s consequent experiments, which have young rhesus monkeys choose between a wire mother with milk, and a cloth mother without, quickly poke holes in this way of thinking. As we’re guided through Harlow’s methodology, the promise of his conclusions and the cruelty of the experiments themselves are constantly at odds.

A side anecdote about Harlow accidentally locking himself in with the monkeys lightens the tone for a brief moment, as well as providing a sliver of insight into his marriage. (Harlow married three times: the third time was to the first wife again.)

All the while, Dylan Meconis’s art establishes a grim tone, laying out Goon Park (a play on 600 N Park) with sure, brutalistic strokes. It’s a high-contrast black and white world that’s alive with cross-hatching. And sometimes the perspective is distorted slightly, giving us the feeling of gazing at the action through a nightmare lens.

The characters, meanwhile, are well-differentiated and subtly expressive. Harlow himself is a fascinating mix of charm, nervousness, and determination; his face betrays touches of resentment and frustration at every turn, sometimes verging on the manic.

But the rhesus monkeys themselves are the most alive, tangible, and expressive things in the book, screeching and scrabbling and frolicking from one page to another. A bit of research reveals further cruelties toward these monkeys that were not explored in the book, but even without that bit of context, it’s hard not to mourn for them.

The hand-lettering is the only visual element that doesn’t quite work; it looks a little too casual next to Meconis’s regimented cross-hatching. Maybe the contrast is deliberate – I find usually that hand-lettering adds energy to a story that would otherwise feel stodgy – but in this case I’d say the bare bones of the story are sufficiently bracing in themselves.

At we near the end of the book, Harlow turns to the janitor, conspiratorially. “I know this may seem a little grim,” he says. “But so is raising a kid on handshakes.”

This doesn’t go very far toward accounting for the dubious ethics of Harlow’s experiments; but then, the book makes no attempt to gloss over the horror they inspire. Besides a concluding note explaining that they could never be exactly repeated today, we also have the janitor’s reactions throughout the book, which tend to align with our own.

But then, if there’s an overarching feeling that comes forward in the book’s 77 pages, it’s that Harlow was up against an insane paradigm to begin with, and had to use that paradigm’s rules in order to begin challenging it. This included using the word “proximity” instead of “love”, which was vetoed every time he used it. None of this reverses the harm he did to the animals, of course.

All told, “Wire Mothers” is an upsetting and revelatory read, with a stark, coherent aesthetic that drives its central points home. It’s not cheery, but it’s fascinating, and it’s told with precision and elegance. And as a non-fiction comic, it’s a startling example of the immediacy – and tremendous capacity for empathy – of the medium itself.