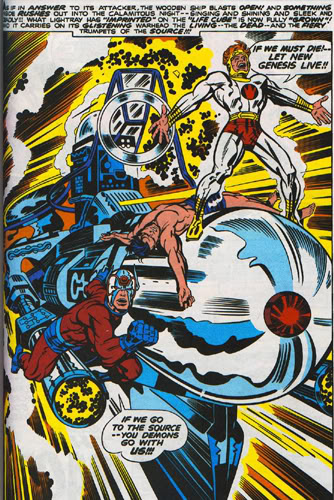 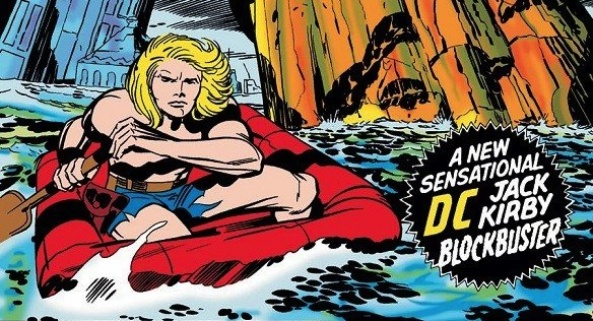 Today, as part of our celebration of Jack Kirby’s birthday, we have two guest articles from two of our favorite creators who have been influenced by Jack Kirby’s work.

First up is Michael Moreci, writer of “Hoax Hunters,” “Skybreaker” and more. While you may not see the direct Kirby influence in those books at a first glance, his recent “Mini Comics Included” Kickstarter definitely saw Moreci’s best Kirby tribute on display (which you can download via this post for free to check out).

Take it away, Mike:

Whenever I’m feeling down about comics, I think about Jack Kirby. Now, don’t get me wrong—I’ve had a very fortunate (though still young) career in comics. I write an acclaimed series, Hoax Hunters, with one of my best friends, Steve Seeley, for a publisher, Image Comics, I’ve dreamed of working for since I was 12 years old. But, there are also plenty of dark, lonely hours where I question whether I’m good enough, if I’ll make a career of writing comics, if there will ever be a time when I consider all the sacrifices I’ve made—time away from my family, my friends, the late nights, the frustration—to be worth it. While I have a lot to be grateful for, in comics and in life, I’m still human. When a peer gets a job I’ve pined for, it stings; while Hoax Hunters receives its share of praise, it certainly does not pay the bills. It’s in these moments that I think of Kirby.

Now, this would be the time to make a natural transition into Kirby overcoming his professional troubles, as they are well-documented and many. If you’re reading this, odds are you love comics and you know enough about Kirby that delving into the details of his life and work isn’t necessary. There have been countless essays, articles, and interviews, as well as the wonderful, endearing biography Kirby: King of Comics by Mark Evanier, that thoroughly cover this ground..

King of Comics is, without reservation, one of my favorite books, if only because it tells not the story of Kirby the artist, but Kirby the man. It does what all great biographies do in illuminating a piece of its subject’s soul, showing what made them real, what made them unique. Reading King, I feel like I know Kirby, that I understand his passion and dedication, to his work, his family, and his friends. It’s the story of a life that is so human, so kind and generous and wise that it warms my heart—and instructs me in more ways than I can ever truly express.

The influence Kirby has had on my career is immeasurable. A few months back, my friend and fellow comics writer Tim Seeley pointed something out to me, something obvious though it never dawned on me. Knowing my love of Kirby (especially the Fantastic Four) Tim said, “you know that Hoax Hunters is just the Fantastic Four, right?” It took a silent beat, and I’ll I could say in response was, “huh…well, I guess it is!” I mean, seriously, it is. That’s how ingrained the FF mythos are in my head. Just two weeks ago, while working on a (unannounced, coming in the fall) project with Steve Seeley, I explained to him the origin of our villain. “That’s awesome,” he said. “Kind of like Dr. Doom!” To which I could only reply “gah, it happened again!” 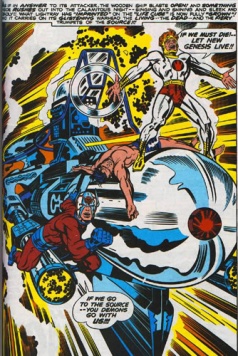 Of course, there’s been other instances where I’m aware of the wholesale appropriation of Kirby. Just recently, along with the Seeley boys, we completed work on our Kickstarter-funded Mini Comics Included, a series of six comics that are an homage to the comics and cartoons of our youths. One such comic, The Omega Family, is unashamedly a Kirby story. And it’s not because it’s about fun space adventure, or because of the kinetic designs or the imaginative spirit that makes the story work. Sure, those things are present, and I’m thrilled to wear that aspect of Kirby’s influence on my sleeve. But what really makes it Kirby, to me, is that at its core, The Omega Family is a story about family. Kirby was always at his best when the human element was front and center in the story. Kamandi has so many moments of tenderness and warmth, as does much of the Fourth World (and countless other stories); underneath the wild imagination and awe-inspiring art, there was always a human story.

Everything I read and hear about Kirby tells me one thing: No matter what difficulties he endured—and there were many—he always treated people well. In God Bless You, Mr. Rosewater, Kurt Vonnegut (another man whose wisdom we should all heed) expressed something simple yet tremendously profound: “There’s only one rule that I know of, babies—God damn it, you’ve got to be kind.” Maybe Kirby read that, maybe not—but it’s a trait both brilliant, exemplary men shared: Kindness.

While I have many ambitions in my comics career, if nothing else, I hope to be known as coming close to the ambition that both Vonnegut and Kirby put forth. At the risk of sounding overly sentimental I’ll share a story with you all:

About two months ago, I received a Hoax Hunters Google Alert (I know, I know) that directed me to a comics forum where some chatter about the book was taking place. It was mainly positive—though there were a good number of “I’ve never of this book” remarks, which always delivers a swift kick to my solar plexus—though one comment has stuck with me. I can’t remember the exact wording, but in addition to complimenting the book, this individual went on to comment on how well I’ve treated Hoax Hunters fans, how I reply to every message, comment, and tweet that comes my way. To have the efforts I make in that regard recognized is—being forthright—one of the more memorable moments of my career.

I’ve been fortunate enough to have good examples in my life and career—my family, my friends, and even Jack Kirby, regardless of never having met. If he were alive today, I’d thank him for the path he blazed, one that makes us not only better comic creators, but better people as well. 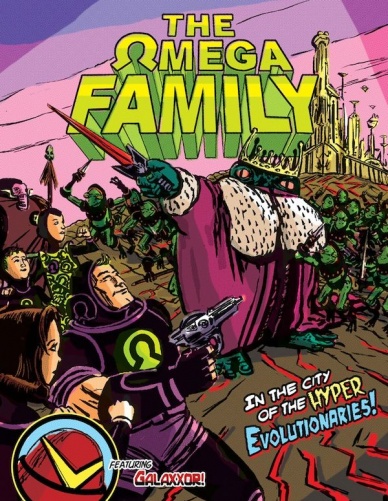 To celebrate the birthday of the King, all day you can download The Omega Family from Mini Comics Included, for free (with the password “king”). I hope you enjoy!