In our final lettering showcase (did you miss the ones on balloons and symbols?), it’s time to bat cleanup and hit all the remaining parts of lettering – logos, sound effects, and in-picture signage. In the often overlooked realm of lettering, these three perhaps go unnoticed the most. After an initial debut, logos can – and should! – become part of the cover image. You don’t read them so much as see them. Sound effects behave similarly. They draw attention to an action, but you don’t need to read “TWAK-A-DOOM!” to understand an explosion. The same goes for signs, printouts, and newspaper headlines in the background of an image. Sometimes it’s a vital clue, and sometimes it’s a joke.

Logos are extremely important, not just to comics, but to everything that needs a brand. To be effective, they must be simple but unique, distinct but legible, trendy but timeless, and still convey something about the book to a reader. Unique logos are especially important for franchise characters like Spider-Man who have multiple variations. Despite similar titles, the samples shown above are different enough to be distinguishable even by an uninterested third party, making it unlikely someone will purchase the wrong book by accident.

Here’s a selection of logos which do a good job of conveying something about the story. The stylized o in “Accelerators” is a device which is central to the narrative. “Alex and Ada” is a basic, no frills logo which matches the empty, sterile setting of the plot. The next three are obvious plays on the subject matter – “Iron Man” has circuitry in the letters and a mask between the words. “Numbercruncher” substitutes numbers for letters like an old flip dial clock. The Turtles in “TMNTA” is rendered as a turtle shell. “A Voice in the Dark” is probably the most inventive of this set, co-opting the visual representation of an audio feed to make letters for a comic about a radio show.

If you’d like to know more about the thought processes behind logo creation, there’s nowhere better to look than Todd Klein’s blog. If you want to see some truly terrible, non-functional logos, you can try to decipher the names of some heavy metal bands.

When it comes to sound effects, there’s infinite room for analysis and discussion. Unlike word balloons, there isn’t a “regular” type sound effect to use as a baseline for examining special ones. Every twack, snickt, sprang, crunch, and krack-a-doom has its own color, size, location, and arrangement. To narrow the focus to a reasonable level, let’s limit the discussion to comparing different variations of a fairly common sound in comics – a gunshot. By examining the myriad ways to apply this one sound, we’ll find many different tricks in a letterer’s tool bag.

This scene from “Sixth Gun” #3 was drawn and lettered by Brian Hurtt, and at first glance, it’s a fairly standard use of the BLAM sound effect. Upon closer inspection of the image though, it’s a perfect example of how lettering can enhance art. Consider – how many times was the gun fired? The art shows only one muzzle flash, and the flying debris isn’t arranged in a way to make it obvious how many impacts occurred. However, the sound effects make it clear there were five shots, and even that they happened close together in time. We also know the shots were loud because the BLAMs fill all the negative space in the panel and then some. The letters are covering the background, but are themselves covered by the foreground and some of the flying pieces, which smartly enhances the depth of the image. Notice, too, how the m in the third BLAM is arranged so it won’t unnecessarily obscure the treeline. 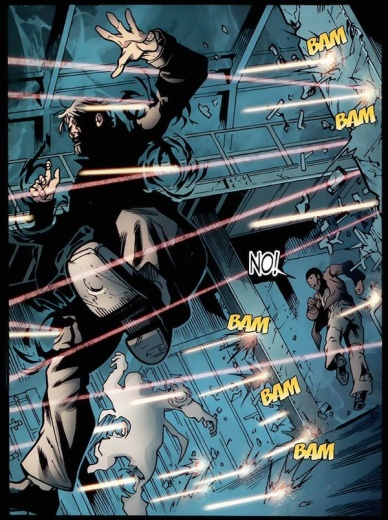 Now take a look at this drastically different scene from the first issue of the first volume of “GI JOE” from IDW, lettered by Chris Mowry. The angle of the image is reversed, so we can’t see the shooter. The lines of the bullets have been drawn in, along with a clear view of the points of impact. Because significant action is occurring in the foreground, background, and in between, there isn’t much negative space left for Mowry to use. All the tricks Hurtt used to make the example above work so well would be worse than ineffective here. Mowry essentially does the exact opposite, and it fits perfectly. The main focuses of the panel are the two deaths and the sailor running escaping. The small size of the BAMs keep the shots from receiving undue attention and from obscuring the action, while at the same time their placement highlights where the impacts are hitting. He also decided not to place any of the effects partially behind parts of the image, which probably would have been distracting considering the multiple layers of depth and the smaller size of the effects. Note also the large variety of possible sounds here. There are ricochets, ripping clothes and flesh, and pulverized concrete, but Mowry only added the BAMs called for by Chuck Dixon’s script.

This scene from “Batman” #622 was lettered by Clem Robins and is yet another different setting. Here, artist Eduardo Risso left much more negative space, but at the same time there’s no background or impacts. Even in this minimalist panel, Robbins uses two tricks to make the sound effect fit and to add depth to what is basically a floating image. The first is to put the letters behind the falling shells. Risso already added some perspective to them by changing their size, but putting the ‘closer’ ones in front of the ‘noise’ enhances this even further. The second is a bit more subtle. Robbins put the sound effect where there was room to make it largest (and to utilize the spent casings), but this also put it relatively far from the source of the noise. Using the same color transition as the muzzle flash in the letters helps connect the two in a reader’s mind. 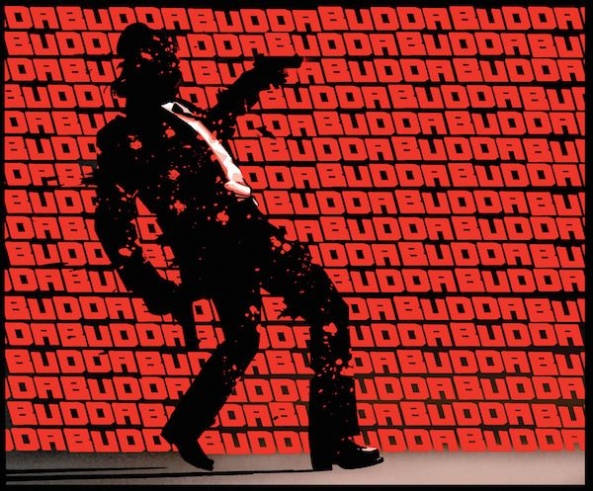 In this panel from “Thief of Thieves” #5, lettered by Rus Wooton, the lettering plays an integral part of the image. Imagine the scene without all the BUDDABUDDABUDDA. It would still be dramatic and compelling in ‘silence’ thanks to the build up (go read it), but it would have a very different feel.

Using blood-red letters on a black field makes the edge of the silhouette rough and jagged without sacrificing its shape. Combining this with the red holes in the body makes the whole panel feel like one solid piece instead of separate elements sharing space. The lone strip of white lets your eye know you’re looking at a shadow on letters instead of a human-shaped hole in a sheet of letters. This isn’t all Wooten, of course. The panel required the full talents of artist Shawn Martinbrough and colorist Felix Serrano to work properly. 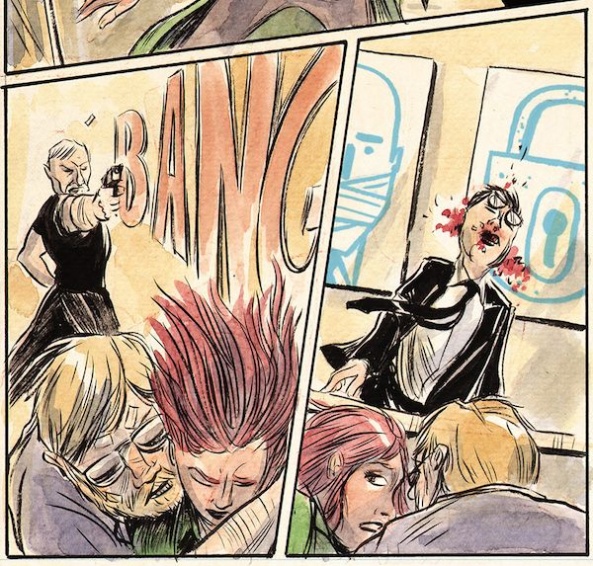 If you want to see some sound effects which are truly part of the image, look no further than Matt Kindt’s “MIND MGMT.” This scene from #7 includes a single BANG which was painted directly into the image. Notice how it wasn’t applied flat, like the other examples in this showcase. The guidelines for the letters come from a perspective with a vanishing point somewhere behind the gun, giving the word the impression of being fired along with the bullet. This method also provides some context for the distance between the Sniper and the dodging heroes. 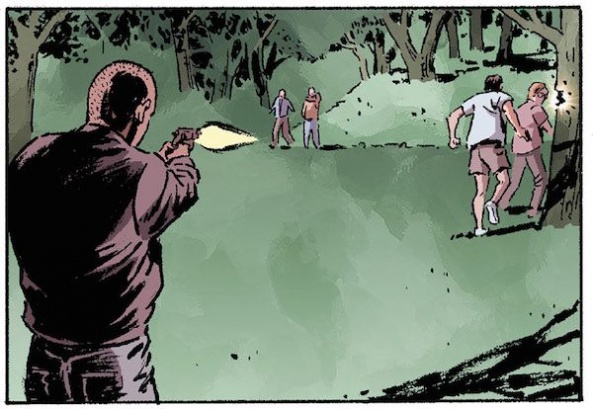 Finally, there’s the case of the missing sound effect, such as in this panel from “Near Death” #2, lettered (or, rather, not lettered) by Charles Pritchett. Here, and in most of the series, writer Jay Faerber opted for no sound effect, expecting the reader to interpret the noise on their own when they see the muzzle flash and the impact on the tree. The only sound effects in the whole series are limited to actions which occur off panel but affect the characters on panel, such as a knock on a door. This can be a risky route, because it requires the writer to rely more heavily on the artist (Simone Guglielmini, in this case) to include important details, and on the reader to spot them without exposition. When successful, a silent gunshot can add more tension to an already suspenseful scene. (Not to be confused with the pfft of a silenced gunshot.)

The final aspect of lettering to be featured in our showcase is the letters on newspapers, buildings, and other background objects which are so easy to overlook. This isn’t present in every issue, not even in every series. When they are present, they come in four varieties.

The most basic type happens when the artist draws in a sign, a billboard, or a blinking light but leaves it blank. In a situation like this, the letterer will either fill in whatever the writer directed or drop in something generic. Sometimes it’s story related, sometimes not. 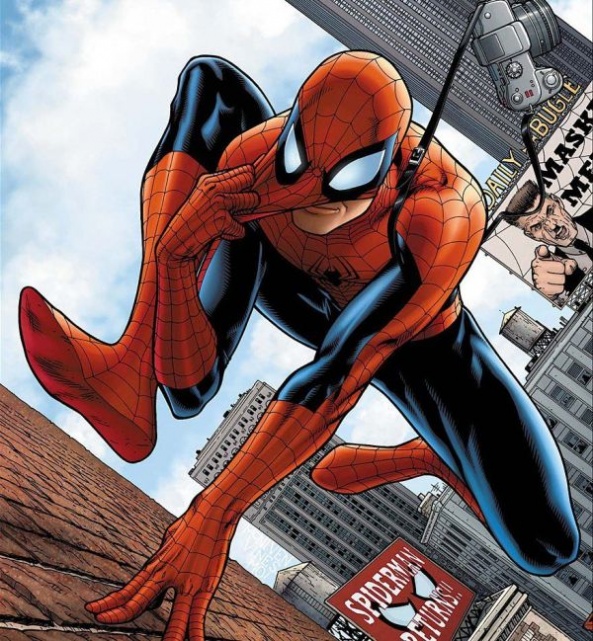 Then there’s the expository variety – the fluttering newspaper with some recent event, or political billboard prompting the lead character to reflect on how much they loathe some pending legislation. The example shown at the right is a bit of a cheat – it’s from a cover, not an interior, and it’s partially cut off. Despite that, it’s still conveying details of the story by reminding readers that the local paper thinks the hero is a masked menace. 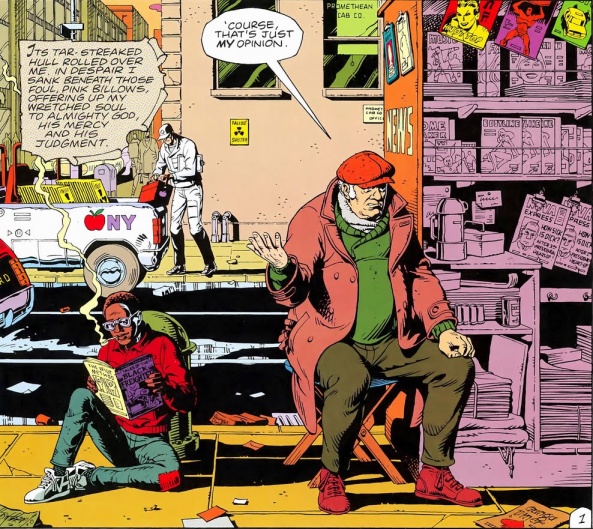 The third type is foreshadowing or clue dropping. It’s subtle and ultimately unnecessary, but very rewarding for readers who pay attention. Dave Gibbons and Alan Moore took this to the extreme in “Watchmen.” Click the excerpt on the left to see the full size image and see if you can spot all the details.

The sign in the background and the newspapers were obvious. Did you notice the flier for the Gunga Diner by the owner’s foot? What about the Viedt ad on the back of the “Black Freighter” comic?

The final variety is humorous. Futurama excelled at this on television, with almost as many jokes written in the background as spoken in the plot. But in comics, there’s probably no greater example than this scene from “Batman: The Widening Gyre” #1, lettered by Jared Fletcher: 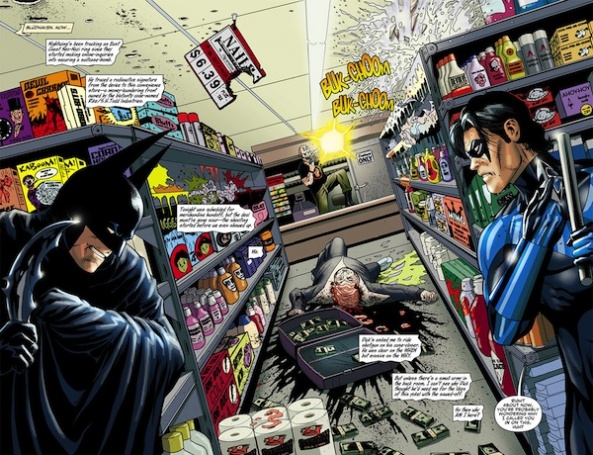 That’s a good place to stop.

There are few letterers whose work is popular enough to be well known, but industry veteran Clem Robins is one such letterer. He was kind enough to answer some questions about how he works and how lettering has changed over time.Let’s start with some background. Where did you grow up, what kind of education did […]