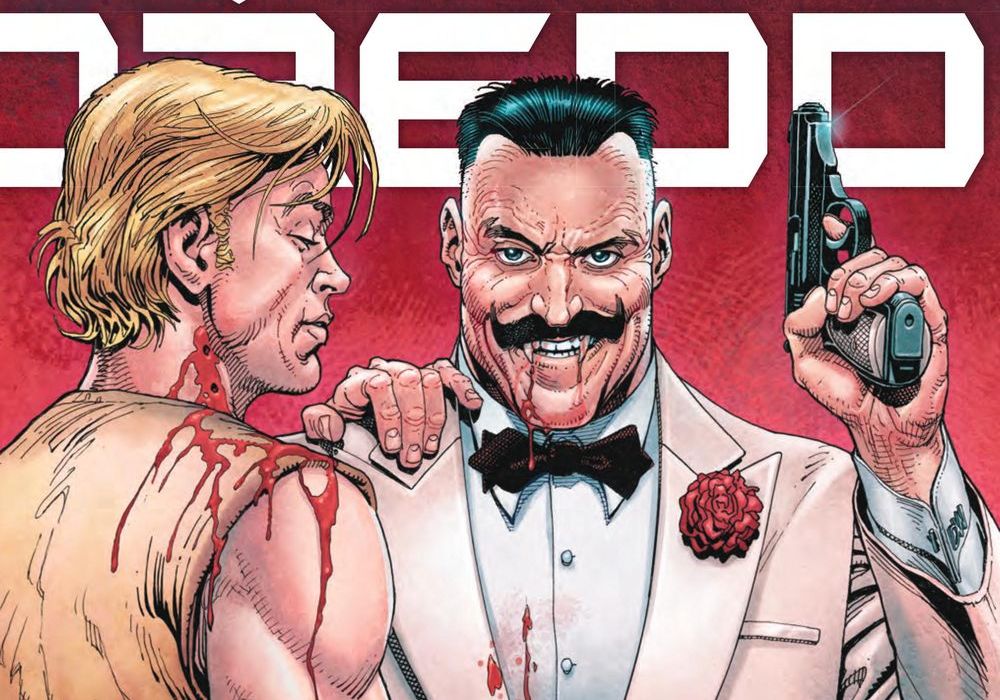 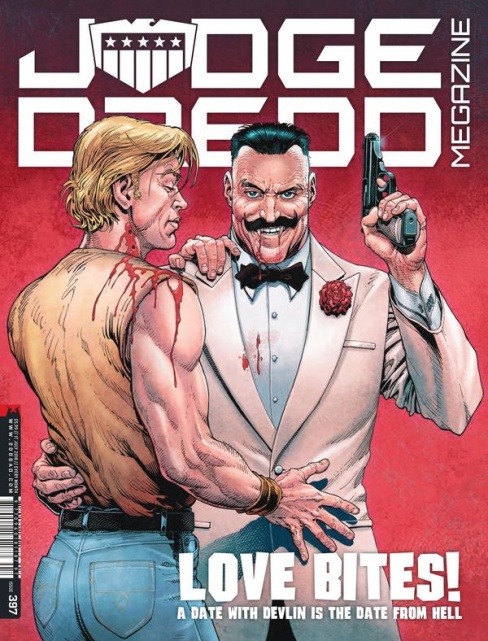 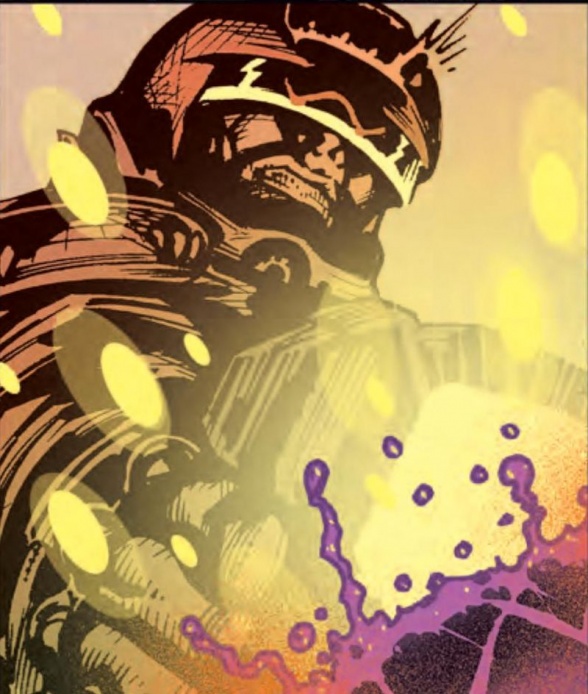 Michael Mazzacane: Judge Dredd leads a squad of Judges into the alien world of the Razorjacks, they are men and women on a mission. And that mission is dirty with the first two pages showing the results of an extended fire fight. In the previous ‘Judge Dredd vs Razor Jack’ strip, I praised the inking by John Higgins and Sally Hurst’s color pallet. And while their finer qualities come through a few pages later, the opening couple of pages of this strip are a bit rough in understandable but not satisfying ways.

The page design themselves aren’t the problem. It’s a mixture of overwhelming samey tones, purples and blues mostly, mixed with the anonymous fascist design sensibilities of Mega City One. All of these decisions are understandable and make sense within the world of the strip. The Judges aren’t supposed to be that unique, Dredd stands out because he’s both Dredd and given the hero shot and his helmet is punched in with a bit more red. Everyone else not so much. All of these decisions make sense. Just that, when mixed with the color pallet, the opening battle is a bit muddier than I’d hope for. The design on some of the spotlight panels on the second page are excellent, and stand out in contrast because they are awash with orange and highlight individual – if anonymous – figures.

Tracking who the rest of the squad is a bit of a pain running through the strip. However, the overall design work from Higgins and Hurst make up for it. The page where they journey through a razorjack incubation ship is a strong example. The ship is essentially a big sphere with some legs, and Higgins furthers the circular motif by drawing interiors that lack a definite sense of space. Panels seem to spiral into infinity with various checkered and hatched patterns drawing the eye in. Here the color pallet is a nice complement and enhances everything. Everything reads as truly alien.

There is one odd bit on the page, a series of boxes that look like they’re dialog boxes but are just filled in. Nothing on the page feels missing dialectically. And they are spaced in such a way they make a nice sorta stairway connecting the top and bottom halves of the page. Other boxes show up like this in subsequent pages, so I’m not too sure why if this is an art error it got through.

For a strip stumbled a bit at the start, it’s worth noting they end on a strong bit of tension as Malady, first agent of the Razorjack Queen, makes their presence felt. It’s actually a couple solid pages of build as they stalk through the ship, silhouetted in very Darth Vader-esque fashion. Annie Parkhouse lettering them with craggy bright red balloons, continues how the strips treated alien voices and make them appear incredibly fierce. It sends the strip out on a good foot. 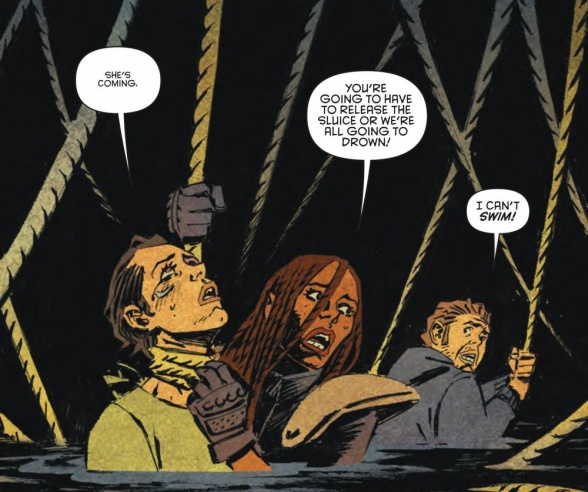 Kent Falkenberg: Si Spencer’s script is high on the creepy quota in ‘Irmazhina, Part Four.’ In doing so, the strip plays to Nicolo Assirelli’s obvious strengths. And the result delivers a high-water mark in what’s been a fairly lacklustre story so far.

‘Irmazhina, Part Four’ puts the infighting between the cast on the backburner, and focuses rather on the tangle of knotted ropes and darkened, rising water than threatens the lives of the characters. Assirelli is a master at using space and sparseness in his panels to convey the shadowy terror and existential dread that lies at the heart of the mystic temple this story is set in. The design of the wraith hounding the titular group is unsettling enough with her head snapped over backwards. But Assirelli goes one step further, and focuses the entirety of many panels on the crazed and terrified expressions that each character has in the response to her presence. In doing so, it not only reinforces the gravity of the situation, but also speaks to the fact that these characters are really alone in face of this horror.

Where prior strips felt bogged down by the forced interactions between these people, this one relies on response and reaction to the situation. Assirelli’s art is clean and energetic and moves the strip along at a brisk pace. ‘Irmazhina, Part Four’ is the type of strip this story has been waiting for since the start. 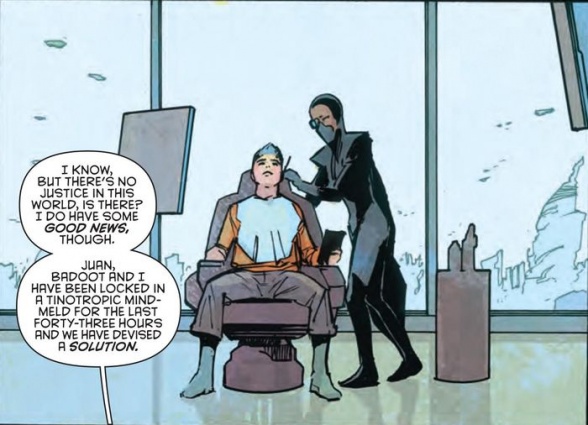 Rowan Grover: Waugh is back and stylish as ever in the latest strip, “Kiss of Death”. McConville cleverly chooses to play Waugh as the exotic, controversial celebrity, doing this best by focusing the narrative through the eyes of Mercury, a young up-and-coming celebrity. It’s interesting that we don’t actually see the titular character for the first four pages, setting him up brilliantly through hearsay as Mercury discusses him with his assistant. And then we get the man himself, as he suavely examines a giant balloon-dog statue with genuine enjoyment. Like Mercury notes in his interior monologue, we don’t get a lot of contact with Waugh outside of these fleeting moments, making him feel truly top-tier. What’s interesting is that he seems to work well as a social changeling here, flirting his adventures with the general press, before acting a little looser with Mercury. It’s a great re-introduction for Waugh, and the brilliantly explanation-less ending has me excited for more.

Mike Dowling has a lovely clean-lined aesthetic that works perfectly in tone with what McConville seeks to accomplish in his script. Dowling’s Mercury is one of the most striking characters here, especially as we spend the most time with him. Right from his first appearance, his is a face of skepticism – the lone voice that disbelieves the hype about Devlin Waugh. Dowling handles back and forth conversations well between panels. We can see that in this sequence, Mercury’s assistant is clearly please and amused by her choice of Mercury’s date, and Mercury himself is a mix of shock, disbelief and concern. And the setting work here is fantastic. Watching Mercury waltz up to the gallery with the city sprawling beneath, having Waugh and Mercury stand in the sparse, clean gallery, and seeing the final chaotic scene of destruction all adds up to a comic that feels authentic and real.

McConville and Dowling prove here that they’ve still got a firm grasp on this character since their first story a year ago. “Kiss Of Death” carries Waugh as a mythical man of fame through the eyes of others, and I’m intrigued to see how the final scene plays out. 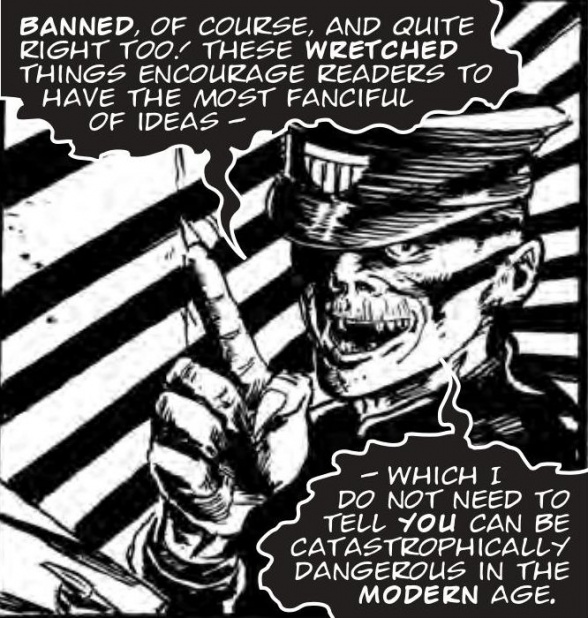 Tom Shapira: there might be no strip harder in the entire 2000AD / Judge Dredd Megazine than “Tales from the Black Museum”: the character-strips can often work even with weaker plotting and art because the concept is strong enough, “Future Shocks” are very demanding in terms of plotting but have rather large creative freedom. “Black Museum” offers, in many ways, the worst of both worlds: of have to work within the world of “Judge Dredd” but also do a one-off with a twist that is not reliant upon the familiar characters.

“Prophet of the Stormm” does have a decent concept – a book series that predicts the rise (and various falls) of Mega City One and the Justice System but doesn’t really seem to be sure what to do with it. David Baillie does well-enough with the pacing of the story, this is meant to represent decades of in-story time and he makes it work, and Steven Austine does some solid Dredd stuff that wouldn’t be out of place within the main strip. But the story itself just doesn’t amount to much – is this a story about how a corrupt system ignores obvious hints of its own downfall? A commentary about the way nerd-groups create cult-like societies around creators they like? A trip down memory lane for long time Dredd fans (name-checking Necropolis, The apocalypse Wars, Judge Morphy etc.)?

The Answer is – it is all and, and therefore it is none. There’s just too much there for the small amount of pages. This seems like something that would have worked better, much better even, as a longer serial in the main strip.

Greg Lincoln: “Chopper” is a bit of a mixed bag this time around. David Baillie relies a bit too heavily on exposition and heads a little into the realm of info-dump just as this part opens. The front-loaded technobabble and background on the nanomachine cloud, though interesting, serves more as a distraction from the overall story. The pages that make a more interesting personal story following Choppers as he flips back and forth between the Dreamtime and reality in his hunt for his friend and possibly mentor Karadji Wally exploring his mental state. We learn a lot about Baillie’s interpretation of the Dreamtime as he compares it to lucid dreaming of which he shows bit of understanding. I am left wondering though how much of that description is cultural appropriation compared to how Dreamtime and the aborigines actually experience it. Baillie does do a good job in one page of explaining his antagonist who was at one time a Judge who took the long walk, though I didn’t understand all the story references to the Judda it’s clear something ultimately corrupted him. It’s a good set up for the finale a fallen hero vs a reluctant and self doubting one.

The psychedelic gutters and backgrounds this time around now lost their novelty. It’s odd to be writing this but, though I still love seeing this color pallet, somehow as used here it’s become more distraction then atmosphere. The art division between Len O’Grady and Brandon McCarthy is surprisingly pretty seamless. Their finished panels look alike enough due to their line quality that it’s a seamless read, even if there are differences in overall style and proportions. The subtle transitions between real world and Dreamtime are pretty effective, and we’re the stand out pages in the story but may have worked between psychedelics that sadly draw the eye away from the art. The effective scenes in ‘Wandering Soul’ visually pull heavily from classic comics artists like Kirby and Möbius with the artists approach to technology and landscapes respectively. It’s an atmosphere that stands out in this as the cameo of Mega-City one “hero” Dredd stand out by contrast. It’s a shame that the pages feel a bit confused this time with the brightly light gutters surrounding them.