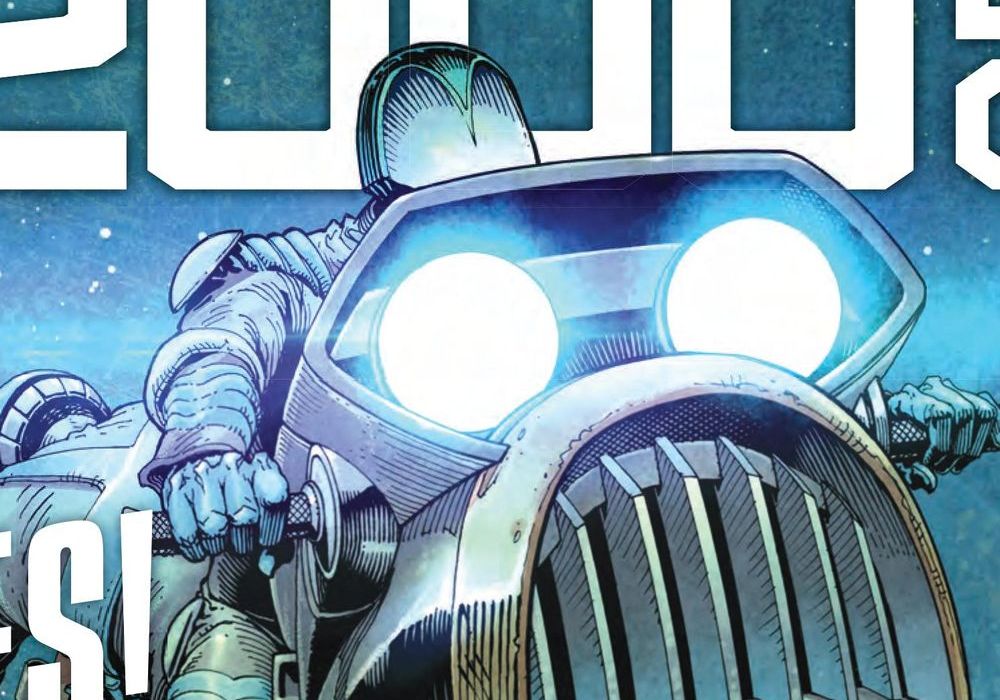 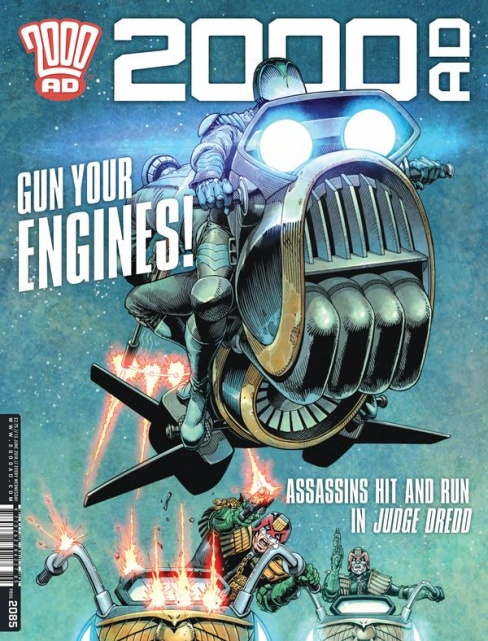 Greg Lincoln: Compared to other recent ”Judge Dredd” story arcs, ‘The Paradigm Shift’ is shaping up to be a bit of a longer one. It was surprising, given the recent trend, that part 4 didn’t just race to the finish of the story and tie things up, a really nice surprise. Instead, Michael Carroll dropped a little of the who and the what of the mysteries in the story before ramping up the stakes for the Judges of both eras. He did finally resolve the question of why the Pleiades tablet was of such interest to Dredd and the Justice Department: it was the locations of all the nerve toxin stores, but in addition the device contains all the activation protocols too. We also learn from the assassins in Dredd’s time who is searching for the hurried weapons in addition to the fact that it’s a political radical. Carroll is, as he has been, clever in the method of his storytelling. He’s never openly expository, all the clues and hints are there in among the dialogue just asking to be put together by the reader. The other story element that stand out here again is the difference in the way the Judges operated once and how they do later. Comparing how the Judges act and the punishments they impose out it’s clear that somewhere between Francisco Deacon’s time and Dredd’s there has been a clear growth in the authoritarian nature of the way justice is met out. Just the fact that Deacon calls for medical treatment for the agents that threatened him, this humanity does lead to him getting shot with his own weapon, shows a level of compassion largely lacking in Dredd’s time. Carroll doesn’t openly comment on this, it’s up to us what to think about this if at all.

The Jake Lynch art reveals a lot about the characters through his use of posture. Joyce comes off far more personable then the canonically stoic Judge Dredd; his body language in the interrogation scene, leaning into the guy coping a plea, is oddly friendly. Though it’s cool that Lynch slyly includes important story beats in his panels, sometimes you might miss them if you are reading too fast. You don’t need to catch the moment in Deacon’s time where the injured agent pulls his knife to stab Judge Lela Rowain, but it sure helps foreshadow the coming turn in events. The only hint of the knife is hidden almost off the bottom of the panel is important is Annie Parkhouse spiky sound effect. Though Lynch’s character design isn’t totally to my taste I do enjoy a lot his use of extreme perspective and close up to frame big story beats that he employs.

Kent Falkenberg: “You don’t understand,” Nolan Blake is told as a shadowy cabal is further implicated in his case, “if you deal with The Underneath, you’re not in ‘business’… You’re in trouble!”

James Peaty and Paul Marshall close out ‘Heavy is the Head, Part Five’ with our first glimpse of the billowing, industrial underbelly that exists beneath the seedy nightclubs and crowded thoroughfares of The Cube. Up until this point, Marshall has keep his art to smaller, tightly focused panels. But at this point, he lets the tangle of pipes and venting and structural supports dominate two thirds of the page. And Blake is shown to be a tiny figure standing before it all. In light of what he’s told about The Underneath, this image is quite impressive in showing just how far this mystery might sprawl and just how out of his depth Blake might actually be.

That’s not to say he’s not someone who can handle himself. Peaty’s script devotes it’s first half to showing just how adept Blake is at handling the physical dangers in his path. He quickly dispatches a Minotaur-class Splice, a kind of human-bull hybrid. Marshall’s clean lines demonstrate just how vicious and quick he can be when his life’s threatened. But as effective as he can be in a fight, it’s becoming more apparent he’ll need to rely on his wits, just as much as his fists.

“Heavy is the Head, Part Five” crafts a careful balance between bloody action and intrigue.

Michael Mazzacane: The quest to save Si continues as we learn the dark secret of Inspector Qui. Rennie and Beeby continue to satirize conventions and Doctor Who by having this dark secret revealed in an off the grid event. The host of ‘Who Investigates the Investigators’ is just as narcissistic and self-involved as the mainstream con organizers, the cult of IP is strong. His answer to what happens to the companions, isn’t all that an original, but fits in the overall send up to Who the strip is playing in. With the Doctors recent spat of companions, it’s a theory that isn’t all that farfetched either.

This is more of a move the plot forward strip, and is effective at doing the job. Plot itself just isn’t all that interesting to comment on but does feature a couple of sequences of smart paneling that moves that plot along. The hit list of the former companions is probably the best overall sequence in the strip. It’s eight panel exercise in juxtaposition tracking the commentary with their before and after Qui status. A fast hitting darkly humorous montage of predatory behavior. The paneling as the gang chases across the con floor to Qui’s ship is also rather smart. Googe essentially just folds two different panels into one and hides the extreme shift in perspective with a three panel sequence of as Clive plays with his new Memory Wiper. The sequence shifts the reading perspective so that the transition from high to low angle is pretty much seamless. Clive playing around with a memory wiper gives the strip a couple of decent “Men in Black” moments and an additional comic reference.

Gary Caldwell does a nice spot of using the same exact color to represent angry Sam in both reality and Si’s mind. Maybe his view of her isn’t that skewed, he’s just a moron when it comes to expressing himself. Love him or hate him, Si is their friend. And friends don’t let friends be murdered by interdimensional television predators. 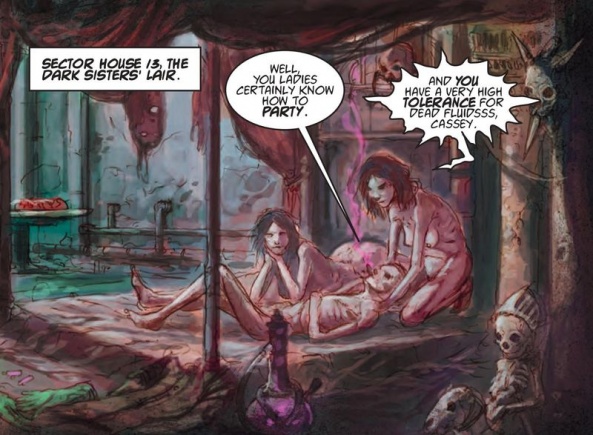 Rowan Grover: Once again, we step into the lair of the bad guys with Part Five. Kek-W does a great job at letting us into Psiren’s head and motivations. This chapter works more or less as us seeing her reactions to the people around her, and why to show us why she is one of the few trying to seek reason in a place of none. We get her lamenting the loss of her less-than-loyal protege to the Dark Sisters, being subject to the slimy projecting of her superiors, and finally deciding to take action within her sector. Underneath it all, we get some political action with the Sov Federation, as one President Nenovich assassinates one of his own after acquiring his digital likeness. It’s fast paced and intriguing, leaving the readers a little shaken but nonetheless like they’ve been let in on a secret.

Dave Kendall once again proves his versatility with working on different sceneries. Within the first three pages, we get a sort of progression moving from the unpleasant room space of the Dark Sisters, to the slightly more tolerable but still dirty and industrial Headquarters, to a more refined and sinister Sov Federation, looking uneasily close to a modern day cityscape. Kendall draws the citizens of these environments full of character and personality, too. Psiren is constantly looking tired as she is berated by her superiors, and her protege Cassey, fits the part of a slacker easily, with a constantly hunched stance and sleazy grin. One of my favourite single panels is in the headquarters, with a bunch of judges crowded around a table akin to a pub scene, where everyone is angled, manic, and full of life.

Kek-W and Dave Kendall continue to make “Damned” a must-read in the weekly progs – not just for fans interested in the origin of the Deadworld, but as a cleverly crafted, morally grey story.

Tom Shapira: Am I getting more into this? Or is it simply the lovely art of Ben Willsher that distracts me from any complaints? This whole chapter is pretty much a fight scene which means Willsher, once again, gets to show his stuff as Durham Red takes on an alien beastie and proves to be the bigger monster. It’s the color work that’s the real attraction here – shifting the mode from a yellowish desert environment to the blue tones of midnight in the deeper woods. It’s simple stuff, the blood-red is stressed strongly against the azure background giving farther oomph to the action, but it works, and works well.

As expected Elec Worley plays up the idea of Red as a suppressed rage-case, fighting for control against her own urges, setting what I assume to be a nature vs nature theme (Red’s target is a woman who seems to have chosen to leave civilization behind her). Subtle this is not, but then the best of 2000Ad always had the quality of straightforwardness – more like a hammer to the face than a sly nudge.

I think the most interesting thing about this take on the character is the idea that her carefree behavior in earlier appearances on “Strontium Dog” is a mask she puts over her true feelings. She was playing a character for Johnny Alpha, leading him on, and now that she is alone she has no one to do play this game and she begins to brood. It might just be reading too much into it but there does seem to be something more to this strip than the surface details. 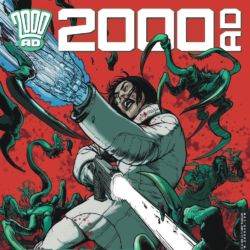 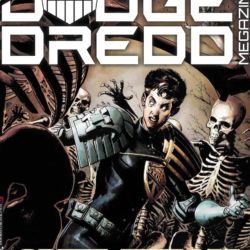 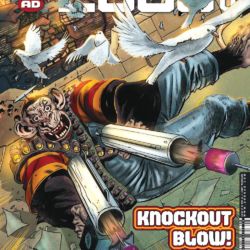