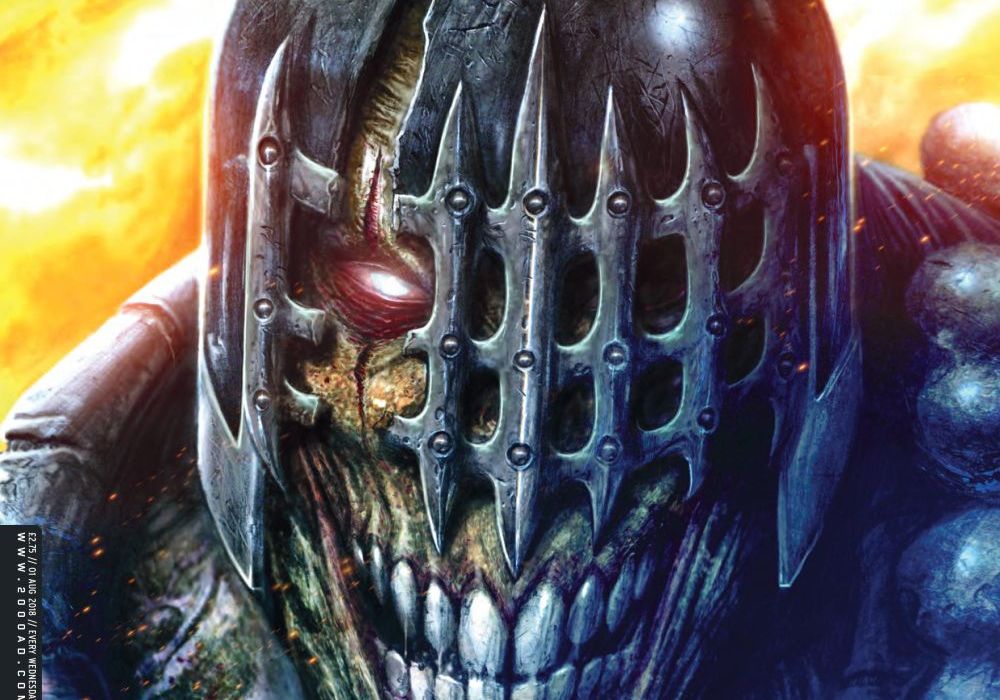 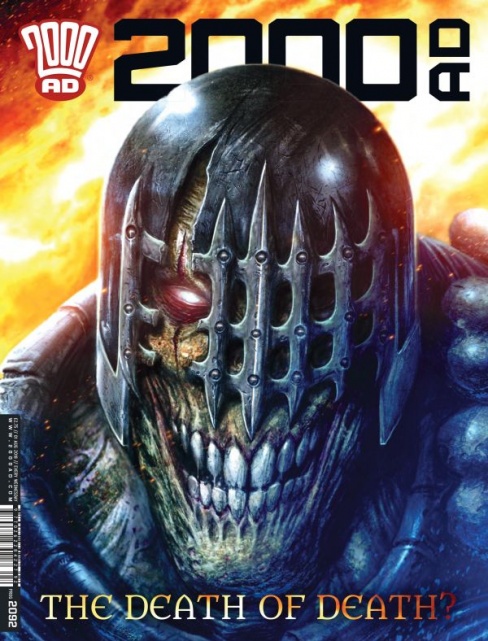 Greg Lincoln: ‘A Better Class Of Criminal Part 2’ adds depth of the overall situation in Sector 11 and exposes some interesting policing by Dredd. Rory McConville reveals the fuller scope of the rampant crime in the sector due to Chief Judge’s lacking approach to police work. Through the opening news report intro and the Dredd’s cursory investigation we learn just how intrenched crime families are in Ulysses Hyde’s sector. Much like wanting your kid to get into a good college in the read world parents in this sector want a good apprenticeship in a powerful crime family. McConville introduces the Danforth Syndicate, one of the major crime mobs, and they leave quite an impression if only for their iconic style, which I mention later. This story also slyly points to the way the Justice Department polices. In the opening Dredd posits a story in why the Azure Skeletons could do what they did. It’s technobabble but it makes an appearance later in the story. The interview was a set up to hook the criminals later. The department has no idea how the gang has these new abilities, these superpowers, but it’s doing its damndest to quash that story. It doesn’t happen fast enough as we see in this part as civilians appear to be attempting to create their own origin story, for example attempting to get bit by a mutant spider. It’s a funny if sad moment in the story as an innocent spider thing is killed.

The shadow rich artwork Chris Blythe and Leonardo Manco is pretty much faultless this week. They have a couple moments of good visual levity in both their treatment of the feelings of the opening news broadcast and in the take-down of the ‘escaped’ spider. Probably their standout work is the character that comes across from the Danforth Syndicate. Though there is little in the dialogue to really differentiate the members of the leader the art and design exude a presence on the page. Manco and Blythe’s crime/gang bosses are kind of Cyberpunk meets goth meets mob boss and though we’ve seen this kind of thing before they somehow make it seem novel, fresh and interesting here. The bright green predator filled fish tanks in the background and dark foreground characters create a tense, foreboding atmosphere. They also manage to make the presence of the Judges, particularly Dredd, have visual impact on the page even with their largely unimpressive armaments and familiar uniforms. I have to complement their tweeks on the Lawmaster appearances, the cycles are recognizable and not without something new to show you if you look closer. A lot to like in this weeks story even if your not intrigued as to the mystery behind the currently enigmatic super powered gang members. 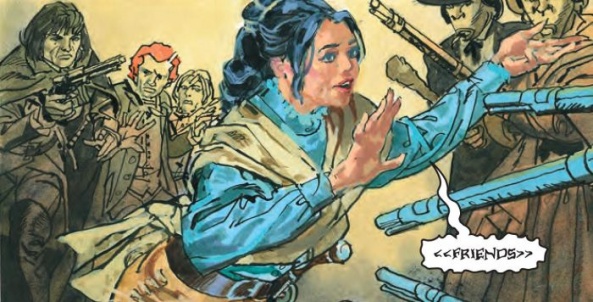 Michael Mazzacane: ‘The New World’ lives up to its name with the realization that the dimension our not so merry band of misfits have escaped into is something of a refuge for human and wyrmkind alike. A hidden, peaceful place, that undermines the reflexive hatreds each side has for the other. This is a surprisingly peaceful place, which makes for a series of peaceful pages. Which is a nice change of pace, this set of strips has had downtime before (the voyage to Boston) but it is masked in flashbacks. There is no such mask for this strip and we get to see people sit, talk, and eat meat straight off the bone.

This change of pace brings out a lot of good expression work in Burns, while his art overall has been solid it has been mostly on the back of strong figure work. Here characters are often pictured from the upper body or in tight close up putting an emphasis on facial body language. He manages to make a brief sequence of de Bergerac and Calhoun arguing engaging but also representative of their shared juvenile streaks.

Anna even gets to learn about her most hated enemy, how these refugees are not the same hivemind beasts from her age but individualists who have come to the new world for freedom.

The transition to the attack on this sanctuary is spectacular as de Bergerac cynically dismisses the groups shared idealism morphs into the eventual assault by Wyrm George Washinton and the Robot Knight. The transition is a matter of panels but how it’s executed makes it read as either instantaneous or in the weeks’ time Bergerac spoke of, either way it was inevitable.

Also in this week’s addition of Crazy Stupid Reveals: Cyborg Francis Bacon, architect of the French Industrial Revolution! This strip is absurd, and yet sells a human heart.

This new chapter gets on my good side by being more comprehensibly drawn. After the chaos of the previous parts this one is more about the emotional reaction to tragedy which means less scenes of things blowing up good. Usually I am all for ‘things blowing up good’ but Mark Harrison tend to overcomplicate the presentation; here, when made to draw mostly scenes of people sitting and ruminating he is a lot better. I am still not a fan of the way his pages flow, but there are no obvious problems in the storytelling.

There is, however, a sense of rashness to the whole process. By the end of the strip we are invited to jump back into the action – which feels way to fast, we have you yet to acclimate to the mood of sorrow the strip demands before it ramps things up again.

The lettering, by the reliable Ellie De Ville, tries to do some interesting things, differently colored and sized fonts used to represent television chatter in the background, but it doesn’t really work for me this time. The blue colors and exaggerated shapes make some of letter fade into the background, while the caption boxes feel too heavily crammed with information. De Ville often does standout work but this one just falls flat.

There are many potentially fine ingredients in this serial, but so far they do not seem to come together.

And while it could seem like a kitchen-sink type blend, the earnestness within the Rennies’ script helps keep the whole thing together. And Richardson proves himself as adept at injecting hardscrabble details in the characters armor-plating, daggers and swords as he is at pulling out to capture the expansive scope of the terrible behemoths who’ve laid waste to civilization.

Storywise, “True Faith, Part 1” strides forth with simplicity. There’s a rag-tag group of survivors living at the controls of Mechastopahles. The seeds of power struggle between a military leader and the grimy pilot who seems to have some level of command over the towering mech. Of course once threatened by three craggy, devilish monsters, that command goes to the wayside. “Fools, don’t you understand. We have no control here, “ the pilot implores, “Lord Mechastophales does not retreat from a challenge like this.”

‘Mechastophales” is a quick ripper of an introduction that’s as fun as it is stylish. Gordon Rennie, Lawrence Rennie and Karl Richardson have a beast of a tale to tell, and a bloody battle in the can for next week. Let’s get ready to rumble. 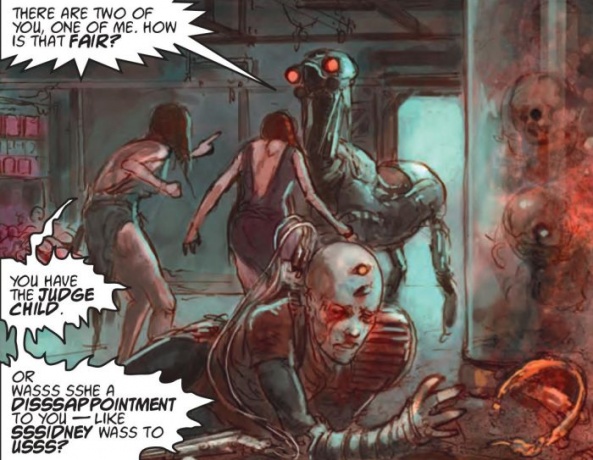 Rowan Grover: The final part of “Damned” comes down with reunited friends and big revelations. Kek-W shows us the conclusion to the short redemption arc of Byke, showing that she has been possessed by the third Sister of Death. I like that Kek-W plays with us for a little bit, having Byke discuss her plans with the Sisters, but I feel like it could have been drag out, as it wasn’t entirely surprising that she would betray them in the end. We then see Jess finally race in to save Judge Fairfax, in a great peak moment for her hero arc that bucks the trend of having a tough, male prince save the princess. It’s quite heartbreaking when Fairfax reveals his fate to her, but again we don’t get to spend enough time with it to truly be affecting. And that last page reveal? Kek-W has widened the scope once again, and I can’t wait for the next book of Deadworld.

Dave Kendall brings the series to a satisfying close art-wise. The way he portrays the Sisters of Death is masterful, having them constantly morphing and shifting physical forms like sinister spectres. I love some of Kendall’s smaller panel framing, however, like the extreme close-up on Byke as she says “I CAME HERE TO SAVE PSIREN” is absurdly brilliant, focusing on her cold, orange eyes as she guns down the sisters. There’s a lot of emotion in Kendall’s work too, especially in the Fairfax scene. When Jess finally rescues Fairfax, we get a follow up panel to which we see Fairfax has resigned to his fate. Kendall gives him a solemn, shadowed visage, in which we see the curse flickering through his eyes, but his expression one determined to keep it at bay. And just as the final page was impressive narrative wise, Kendall brings it together with terrific, flowing composition that shows the enormity and power of the Sov Federation.

“Damned” was one of the most fun and visually beautiful installments of “The Fall of Deadworld” yet. Kek-W bring in more revelations and redemption arcs than ever, and keep readers keen for the next installment with superb ease. 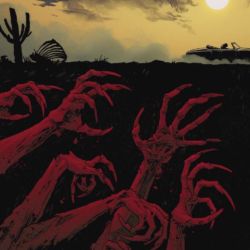