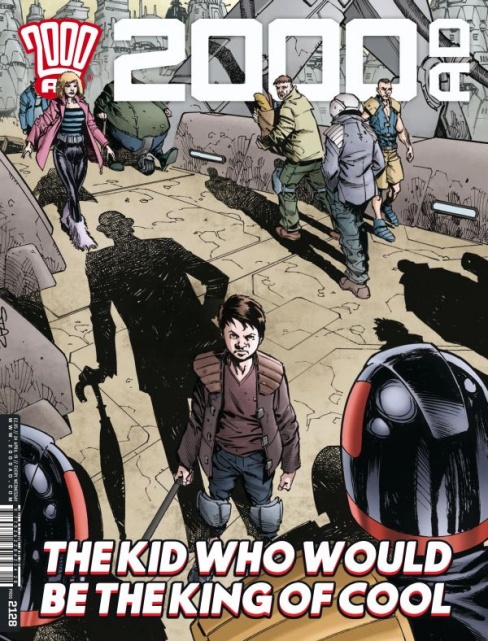 Rowan Grover: Michael Carroll spices things up somewhat in the latest chapter of “The Long Game”. A tenuous connection between Dredd and Sage is shown in dialogue and narration through this case, and Carrol does a good job writing Sage as a double agent. His gruff speech and no bullshit attitude paints him as something of a rogue Punisher type, especially in conversation with Meslin. However, it’s the little descriptions that really sell his true identity. When he hears Dredd has entered the facility, it’s due to the fact that “HIS VOICE CARRIES.”, a fantastic and true-to-character detail if I ever heard one. Then Carroll plays this subtle betrayal even further as, upon their escaping, readers have really double check to see that it was Sage there that caused Meslin’s grav belt to disable. The touch of having Doctor Bryce interrogating Sage at the end is great and hypes up the tension and anticipation for the next prog to come.

Mark Sexton provides some great Mission Impossible-style infiltration scenes, showing a lot through Sage and Meslin’s hand actions and the subtle linework around their eyes. I love the double take that Sage does when he realizes that Dredd is coming, as his eyes display a fear of the inevitable, the unstoppable force that Dredd is. As usual, Sexton then renders a well-constructed worm’s eye view scene watching Sage and Meslin dive in on the Judge’s meetings, with a circular focal point to bring readers’ eyes moving around to the next panel. John Charles does some great work with colors here too, with the blue-brown gradient of the Mega-City One sunset and the moody, dim interior lighting of the prison facility.

“The Long Game” picks itself up once again after the last prog’s dawdling pace and provides a great infiltration sequence that feels like it could have starred Tom Cruise set to a delightful Danny Elfman score. Mark Sexton and John Charles provide some great art to go, giving this an interesting twist for a character I didn’t necessarily care for until now. 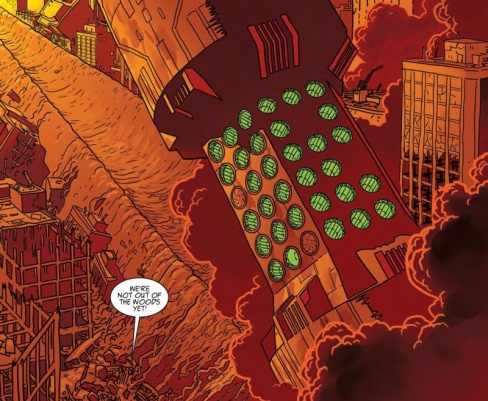 Michael Mazzacane: With the third part of ‘Home Front,’ it appears the creative team are going with the idea of individual strips being specific moments that are all crosscut together. We return from space back to Earth, London, as the heroic grandmother from the first batch of strips pulls her handler from the wreckage of the space battle.

Perhaps it is due to the easily understandable environment and that setting give everything a more definite scale, but D’Israel’s art seems to be back on point. The way they use paneling and perspective to emphasize how big the metaphorical “woods’ are on the first page is better than anything in the previous strip. Using the classic War of the Worlds design for the Martian vehicles also creates a quickly understood sense of scale.

All of these techniques help give the strip a sense of dread and foreboding over everything, from the omnipresent red sun drenching everything and the wreckage that was the city. That feeling of loss lands in this strip also because the creative team give readers just a bit of hope as the calvary arrives. The army on page two is given classic hero framing as they launch a barrage at the Martians. Their heroic framing is mirrored on page four as the Martians effortlessly counter attack and wipe them away as if they were flies. Granny knew to expect this, however, and tries her best to just get out of the remains of London. That sequence was an effective way to dramatize how her knowledge is useful and worth protecting.

After a somewhat light strip in the previous Prog, ‘Home Front’ returns with the mood and techniques that made it grab me in the first place. 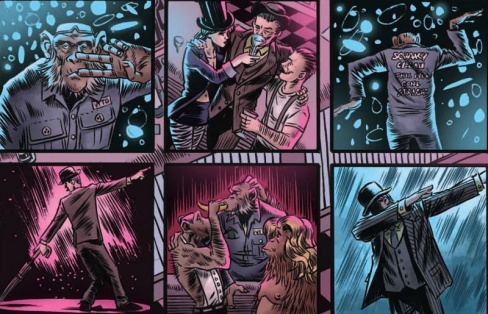 Kent Falkenberg: “Lost in the past,” Max says, wistfully looking off-frame whilst almost being crowded out of his own panel, “The ghost with the most. The birth of the cool.”

And that pretty much sums up Guy Adams and Dan Cornwall’s work this week in ‘How the Max Got His Stripes, Part 5.’ A beautiful wash of pink and purple hues transitions Max and Vito drowning themselves in cocktails and nostalgia back to a young up-and-comer trying to make sense of some abstract art hung on the wall in front of him. Cornwall luxuriates in this segue that somehow captures how lush and vibrant it can feel to look deep into the formative moments of one’s past.

Of course the actuality of these moments is often in stark contrast to the memory. And as such the color palette in the flashbacks feel grayer and in equal measure more grounded and muted. Even the splash of pink in Mo’s apartment lacks the pop you would expect. Even Adams script seems to cutting the bottom out of just how formulaic this type of storytelling is. At one point, the flashback is specifically called out as a montage, as if the word itself were pejorative. “So you were a kid once. So you met a guy who showed you the ropes., Vito even slurs, before the strip slips fully into the past. “You’re like all the rest of us – Who cares?”

‘How the Max Got His Stripes, Part 5’ finds Adams and Cornwall gently taking the piss out of their own story’s convention. This helps to take the edge of a strip that at times gets a bit too lost in its own rhyming slang.

Tom Shapira: Well, I this “future Shock” actually managed to shock me. Not a lot, mind you, but I was expecting a zig and got a zag, but it still offered the pleasant experience of being surprised. Taking place in a nursing home for super-heroes this story follows a new nurse who seems to be after more than a job as she prays into the past lives of the tenants. It’s a good idea for this kind of story, I don’t recall a lot of works dealing with aging superheroes (Gail Simone and Neil Googe’s “Welcome to Tranquility” started with that premise but veered off rather quickly) which seems like a decent spot to mine for gags or pathos (or both).

The short space of a Future Shock means there isn’t a lot of place to do either and story is mostly occupied by setting up a swerve; still Anna Morozova’s art does its fair share to set-up the proper atmosphere of quiet desperation. Andi Ewington’s script for the tenants is a bit a cliché, one misses a dead cat, another is losing is memory, but there’s something about the stark black and white style that sells how miserable the whole thing is without descending to simply making the world disgusting and filthy – the nursing home actually looks rather nice, but it doesn’t change the fact of what it is, what it represents.

There’s some stiffness to that characters but it doesn’t distract too much, and even feels like it contributes to the semi-horror atmosphere. “Juncture” doesn’t offer much, but what it wants to do it does well and sometimes that is exactly what you want from a story.

Greg Lincoln: Ian Edginton delivers pretty much the broad plot developments that I expected from the “cliffhanger” of last week. The presence of the orc, Crixus, among this trio of. Heroes does stall the violence of the gathered greenskins surrounding them. What I didn’t expect, in the same way Yarrow didn’t, was that the leader of the orcs, goblins tolls and whatever to be Crixus’ apparently estranged father. We learn a hell of a lot about Crixus in the course of this story. Regardless of what connotations the word carry the depth of character we are visited in through the revelations here about strained relationship between father and son are certainly more then you would expect. This part also leads up to a few more surprises like a second entrance to the caves and the arrival of a Thorn strikeforce. I’ll say I fully expect the last of the Stone People to arrive to save them all but it won’t work out exactly like I think.

Leigh Gallagher has a lot of emotions to play with with the mass of talking heads scenes that are the majority of this story. He also has to do this with faces that lack a certain definite humanity. He achieves it pretty aptly as even though Crixus’s father is far less humanlike then his son, Gallagher does lend him some ability to surprise readers by coming off as sympathetic. It’s particularly effective when Crixus accuses him of preferring that he as dead, it’s odd to say that the monstrous orc was hurt by that, but that is how it played.

Welcome, Earthlets, to Multiver-City One, our “2000 AD” weekly review column! Every Wednesday we examine the latest offerings from Tharg and the droids over at Rebellion/2000 AD, the galaxy’s leading producers of Thrill-Power entertainment. Let’s get right to it!THIS WEEK IN 2000ADJudge Dredd: End of Days, Part SixCredits Rob Williams (script) Colin MacNeil(art) Chris Blythe(colours) […]

Welcome, Earthlets, to Multiver-City One, our “2000 AD” weekly review column! Every Wednesday we examine the latest offerings from Tharg and the droids over at Rebellion/2000 AD, the galaxy’s leading producers of Thrill-Power entertainment. Let’s get right to it!THIS WEEK IN 2000ADJudge Dredd: End of Days, Part FiveCredits Rob Williams (script) Colin MacNeil(art) Chris Blythe(colours) […]

Welcome, Earthlets, to Multiver-City One, our “2000 AD” weekly review column! Every Wednesday we examine the latest offerings from Tharg and the droids over at Rebellion/2000 AD, the galaxy’s leading producers of Thrill-Power entertainment. Let’s get right to it!THIS WEEK IN 2000ADJudge Dredd: End of Days, Part FourCredits Rob Williams (script) Colin MacNeil(art) Chris Blythe(colours) […]