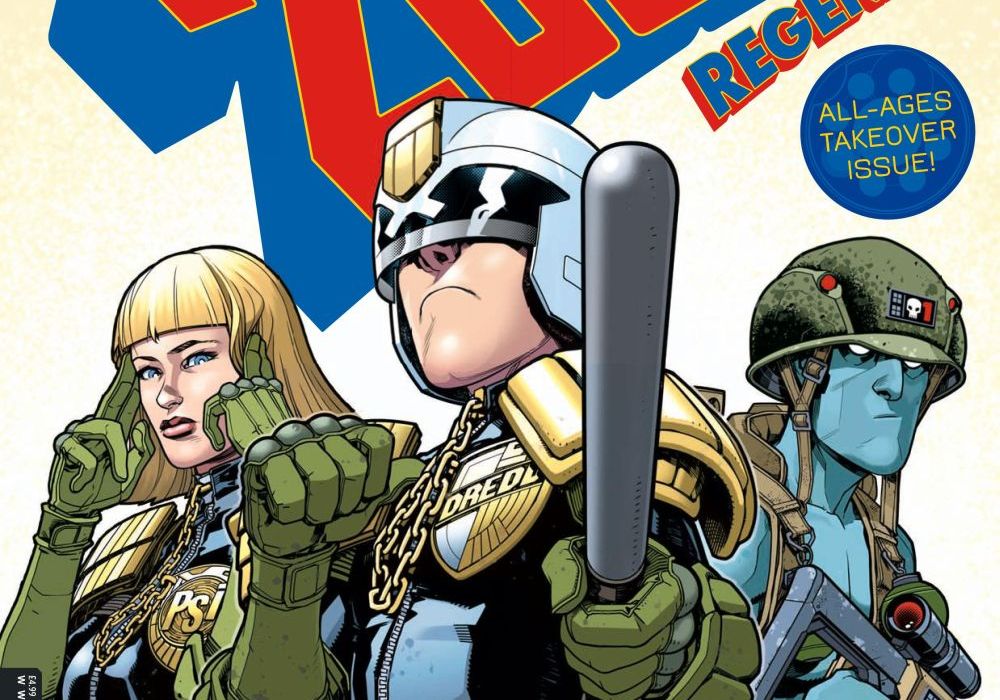 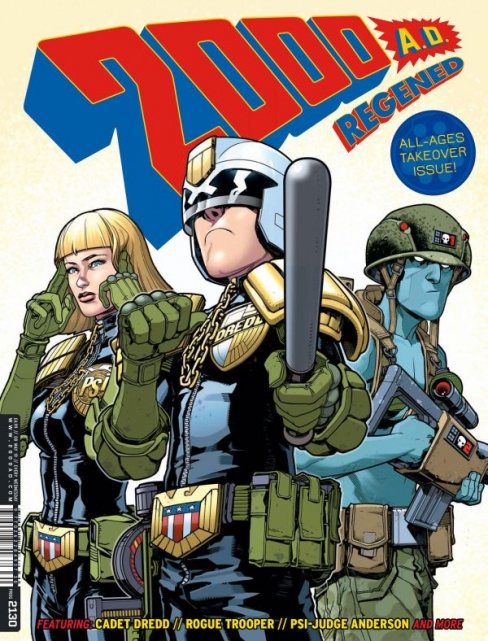 Tom Shapira: On one hand I am happy that Chris Weston is taking a new role as a Judge Dredd writer – this is his first solo effort and he proves extremely able; on the other hand this makes me sad – because ‘writing Christ’ might mean a little less of ‘art Chris;’ and a comics world without Chris Weston pencils is a thought too hard to bear.

Anyway, he’s also drawing this one so I guess the point (for now at least) is moot. It’s a done-in-one “Cadet Dredd” story and thus plays down the tragic political elment of strip while playing way up the comedic everything-goes nature of Mega City One from the earliest days 2000AD. This one’s fun you guys, it’s just so drokkin’ fun: Dredd and his brother Ricco are forced to play nursemaids to a visiting monster-film production from Hondo City, but instead of being a guy in a suite the star of the show actually put his brain inside a giant radioactive lizard – which proves very destabilizing and shortly thereafter disastrous?

Is it a one not gag? Yes. Can you see most of the punchlines coming? You bet. Is it still funny? Yes! Weston just plays it for keeps and throws everything he can at reader – upping the stakes, and the spectacle, with every page. This might be aimed at younger readers but he doesn’t change his sharp, and rather gritty, style and the result is a children’s comics that looks very different from the standardized model of the last decade.

And somehow, between all the chaos and the gags and sweet violence, Weston actually manages to throw some John Wagner-esq digs at recent celebrity outbursts (I’m not sure when he started working on this story but it feels pretty timely), though this is probably an evergreen subject for comedy.

All and all – this get my seal of approval and I hope for more Cadet Dredd in the future.

Greg Lincoln: Though hard to sum up easily in an elevator pitch kind of way, “Full Tilt Boogie” works so damn well on so many levels it’s a shame that, for the moment, it’s a one-shot. The all-ages bounty hunter science fantasy romp that Alex De Campi, Eduardo Ocaña, and Ellie De Ville created has enthusiasm and heart in it’s telling as well as the genre references to entertain long time comics readers. Alex De Campi makes reference to children’s cartoons, adult comics like “Saga,” Japanese superheroes and anime, and sci-fi classics alike. She does all this very cleverly, revealing the elements of this universe through the humorous dialogue without resorting to unnecessary clumsy exposition. Their creations are quirky, fun and light hearted.

The art created by Ocaña is pretty striking. His linework is exceptionally clean. He evokes a lot of expression and feeling from his characters and from his design work. He manages somehow with very little over complication of the art to communicate a lot of feeling and make veiled references to other pieces of popular media, the cat of the crew particularly.

All together the manage to tell a complete tale in these few pages and introduce their setting cast and enough compelling mysteries and hooks to warrant a fuller story. 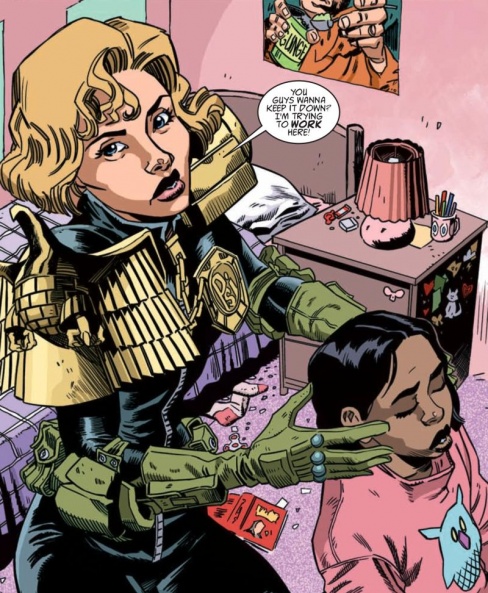 Michael Mazzacane: This prog may be the “young adult” special, but this is still “2000AD,” you expect some sort of darker twist even if Anderson isn’t Dredd. In this case the twist seems to be taking things fairly straight and making it a bit of a workplace comedy as Judge Anderson deals with a kid who is sucked into the world of Spellcraft.

The art team of PJ Holden and Gary Caldwell give things a functional, but cartoony note. None of the pages are all that spectacular, but there’s a pure functionality to this strip that helps it work through and even earn a surprising emotional beat. The reveal of Judge Anderson on page one is a nice piece of design, her big reveal panel acts as backer for a smaller one and the whole thing is situated right near the “Anderson Psi Division” logo.

Holden’s design work does a good job visually guiding us through the various stages of action as Anderson works her way to the highest tower, so on and so forth. It’s several stages of action to work through in about three pages, but the classic page designs and effective use of setting helps to guide everything.

Holden and Caldwell’s art works better when things get fantastical in the world of Spellcraft. This being a strip there isn’t the room to turn it into a full on Warcraft or D&D parody, but the setting does echo the Stockade instance from the MMO. There’s also something just kinda funny about an orc named “Gruntilda.”

The gag at the end that situates it both in the old Dungeons & Dragons panic of the 80s and treats Psi Division as a bunch of working class stiffs is an interesting and effective beat. The core conceit of all this isn’t very original but the creative team have setup a scenario that would work as a serialized feature if they ever wanted to do more.

Rowan Grover: This neat one-shot serves as a solid introduction to readers as to what Rogue Trooper is all about. Cavan Scott captures some great camaraderie here between Rogue and his bio-chips. They bicker and annoy him, but when it comes down to it, he’ll do anything to save the beings that keep him company, electronic or not. In between this classic quest for friendship, Scott weaves a solid adventure tale with the titular character fighting off Norts. It feels a little aimless, as we don’t exactly know why Rogue is roaming ‘round these parts, but it doesn’t affect the flow or heart of the story. The villain, General Frost, is very grandstanding and boisterous but feels very cookie-cutter in her depth and motivations. It’s hard to get a lot of nuance in a series like this, but I feel like Scott could have at least made her stand out from being the typical fascist enemy-type.

Nick Roche delivers a version of the 2000AD house style with a modern punk aesthetic, reminiscent of hyper-detail artists like James Stokoe. The composition in the opening scenes is super fun, especially as the rocky backgrounds zig-zag and frame the action-hero pose Rogue naturally finds himself in. Roche has a dynamic take on Rogue himself, giving him a slightly bulky physique but manipulating him through the page with lightning-fast reflexes and pacing that’s exciting to take in. If all this doesn’t excite you, [SPOILER] you will get to see Roche rendering the massive Transformers-esque War-Dozers, which is some vicious eye-candy. Abigail Bulmer handles coloring here, providing a more restricted palette that feels suitable for a war story, but gives it enough pop-art vibrancy to make scenes like the shot of Souther’s Keep look mythical and haunting.

The creative here team do a great job at selling audiences on the key aspects of “Rogue Trooper” and why this is a character to follow. Scott understands the key character relationships, while Roche and Bulmer bring the world kicking and screaming to hyper-kinetic life. 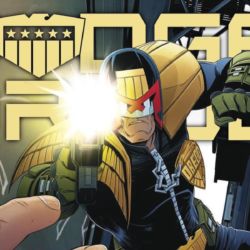 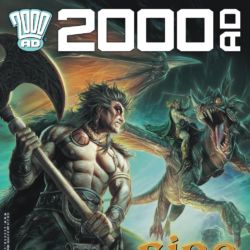 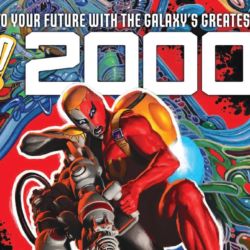