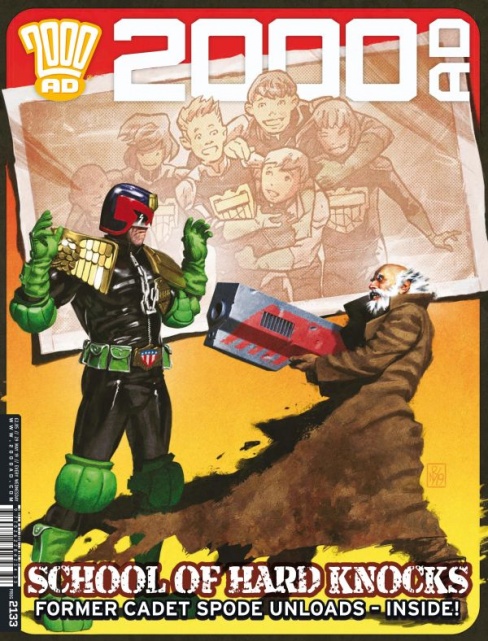 Rowan Grover: Part two of “New Blood” wraps up a very solid precautionary tale about the Judge academy and the nature of Judges in general. McConville establishes Spode’s issues with the academy early on when he outsmarts a Judge on what section a particular law comes from. It’s clever, revealing that Spode didn’t fail because of academics of physicality, rather he lacked the iron composure and uncompromising will of a judge. It’s an interesting critique that McConville makes of our protagonist, and feels weighty even considering the semi-satirical tone of the series. McConville also explores some interesting mental territory with Spode, who had been institutionalized within the academy for so long that on failing, he didn’t know how to properly live within civilian society. The story has some great social critiques in this manner, making it timeless and relevant.

Siku focuses on a more character-driven art style this issue, again stripping back more of the background elements to highlight clever structuring and design. There’s some clever panel work all throughout the book. The third panel on the title page is structured so that we see the regular society all clustered behind Judge Horan, who’s representative of the line that divides commoners from the rulebreakers, with Spode sitting quite alone and definitively on the latter side. Siku also handles super kinetic action sequences well, although they appear sparingly. When the judges break free from Spode’s hostage situation, they do so with an effortless, free-flowing martial arts style that occurs over several panels. It’s weightless in execution and a lot of fun to take in, cementing Siku as one of the best recent “Judge Dredd” artists.

“New Blood” wraps up with some solid social commentary and deconstruction of Dredd’s personality and character. Siku supplies refreshingly simple yet elegant art that brings Mega-City One to life in a way few have before, resulting in a story that feels marvelously self-contained but relevant. 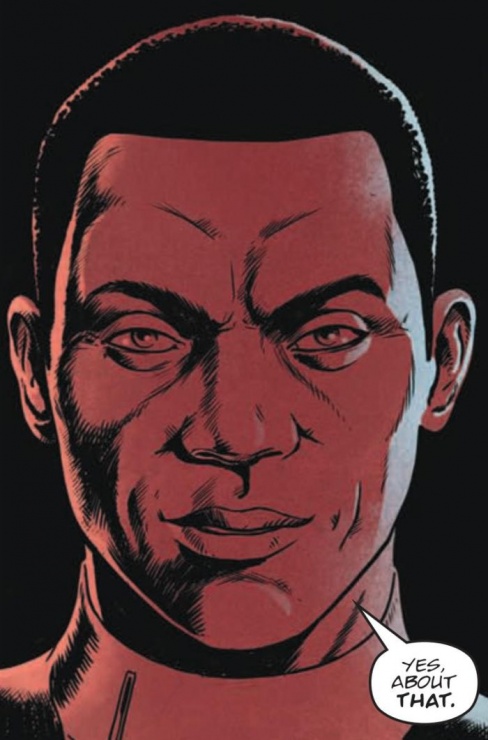 Tom Shapira: As expected this serial wasn’t quite as ready to commit to its own revolutionary nature as I was to buy into it. The utopian rebels show their hand and it turns out they are almost as violent and deceiving as the people in charge of this dystopian reality, which means we can easily cheer for the protagonist as she subverts their secret plan. I think James Peaty overplayed his hand here, heaving Amma off-handedly kill someone just to show he is a bastard skews the question in the heart of the story – “how much you are willing to sacrifice for a better world?” – rendering it all meaningless. Why raise the issue at all if you are going to avoid the implication?

Likewise the ending, a woman scrawling Chimera graffiti on the wall, feels rather hollow: it’s a purely cosmetic triumph, nothing actually changed in the world, presented as actual moral victory. Except the bad guys not only won, they seemingly won so hard they almost failed to notice the rebellion was rising and falling right in front of them. I would probably enjoy the story more if the creators were willing to fully commit to cynicism they present in this final chapter.

Brian Corcoran does solid work here, especially with the facial acting, and Matt Soffe is pretty good at setting up moody colors; but throughout the story I got little sense of both the real and the fantasy world – it’s all presented in shorthand manner that assumes we already know the ins and outs of such fictional realities. Which is fine in theory, but stops them from developing any sense of personality. Strips like “Judge Dredd” and “Nikolai Dante” did much better job of establishing a sense of world in their first strip alone; if we want to understand what people are fighting against and for you can’t leave the world so vague.

This “Chimera” ended up biting more than it could chew.

Greg Lincoln: Subverting expectations, as a storytelling ploy, only really works when the writer delivers something more interesting in the place of the moment we have come to expect. The big fight that Ian Edginton gives in this chapter is initially the one we expect after the satisfying ending twist his hero Crixus threw out last week. We do get a glimpse of the Stone People now brought back to “life” entering the battle against the Thorn, but where the fight goes from there quickly takes an unexpected turn. The battle they give us here is a continuation of the one that Crixus’ momentary death interrupted but it ends in an unexpected place. Edginton takes the story into new unexpected territory, rejecting a violent coup de grâce in favor of so,etching more “interesting.” He took away the moment we expected and replaced it with a development that makes us wonder where this will take us and engages us deeper with the story.

In this chapter Leigh Gallagher created pages that feel like wide screen movie experience. He used the small number of pages and panels to more hen full effect dragging the eye all the way across pages and focusing on a few choice moments, closeups and story beats. He showed us a precious few of the unique and distinctly different Stone People as this chapter opens and though it’s sad we don’t see more he gives us enough detail to imagine them ourselves. And though he only had a few panels to work with Gallagher have them a sense of motion and flow that with what he did show to make the chapter feel much bigger then it actually was. Stepping back visually from the action and punctuating the medium shots with close ups hitting emotional or story beats gave a definite solid powerful flow to this part of the story adding impact to that final interesting left turn in the story. 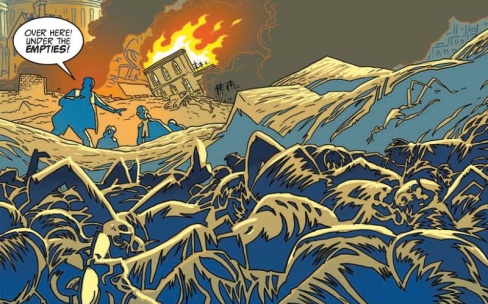 Michael Mazzacane: One of the upsides of “2000 A.D.” being a British is the difference in slang. As the seventh entry in “Scarlet Traces: Home Front” begins we get a solid funny line that I’m fairly certain is filled with expletives, “Can we get a soddin’ shift on? I don’t want to get caught out here with my arse in the air!” The next several panels are sort of like that as our rag tag group of Venusian rebels make their way to the home base and catch Fay Alexander up on everything. It also makes the moment when they hide amongst the dead, or “Empties” as they describe them, sound more natural. That’s the thing this strip does is it builds a sense of reality around a Martian invasion of Britain.

The guerrilla fighters Fay finds herself in are the kind certain aspects in her country were rallying against as making them weak. They are veterans of their own occupation by the Martians, having been invaded after the initial failure of Earth in the forties. Edginton’s scripting turns this moment where they are telling her their backstory and giving the reader additional info into this wonderful character moment as they joke with Alexander on the nature of their class and why they never came forward to the Government with what they know.

The sun is starting to come out which requires a change in style from D’Israel. Previously his worked had been primarily built on strong lines and super saturated colors. As the slow rising sun comes through, everything is washed in a pale yellow light. D’Israel’s line work is still there but there is an added emphasis on negative space, creating a sort of stamp like effect. These negative spaces aren’t pure black, there is a slight gradient to them. The function is similar though as it locks in and makes very clear the various facial expressions the Venusian’s are making. It isn’t always super clear but more often than not it gives everything a unique look.

That pronounced expression makes the moment where Fay hides amongst the Empties truly horrifying. The light catches her full face and the empty ones the same, and everything is horrifying. That mixed with a half page pov sequence as one of the walkers go over her make for a fantastic single page sequence.