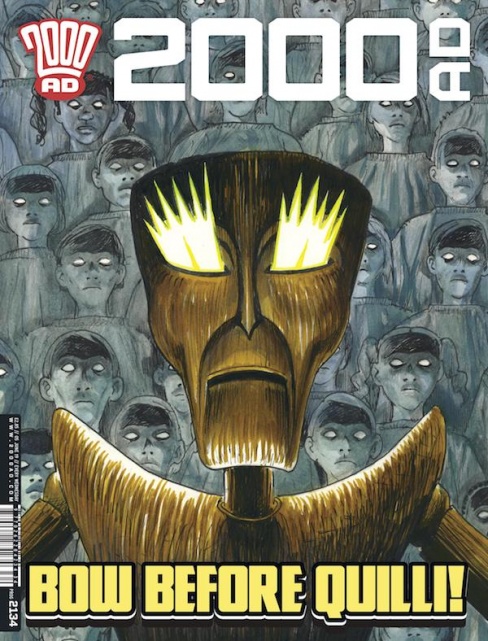 Matthew Blair: Judge Giant is back in action, and he’s got a bone to pick with Dredd after Dredd left him and his friends high and dry after defeating Judge Smiley. Of course, that is assuming both of them can survive an attack by Justice Department robo-hounds that have be hacked by a mysterious assailant. It really says a lot about what the Judges of Mega City One must go through on a regular basis when an attack by vicious robot dogs capable of chewing through steel seems so ordinary that they decide to use this time to air out their personal grievances with each other.

Writer Rob Williams demonstrates just how little Dredd cares for his co-workers and just how impersonal he can be. While some might find the juxtaposition of personal issues and impersonal crisis jarring, Williams uses it to showcase the disconnect that Dredd has with his fellow judges. For Dredd, there are no friendships, no deep emotional bonds forged through conflict, and no concern for the personal well being of others. There is only the mission and the law that must be served, no matter what the cost.

Henry Flint’s artwork is wonderfully kinetic, frantic, and bloody. For starters, special mention deserves to go to the robo-hounds which are well designed and properly menacing with glowing red eyes and plenty of blood around their jaws. Flint’s use of heavy action lines, coupled with Gary Caldwell’s rich and dense colors, gives a tremendous amount of weight to every gunshot, punch, and desperate sprint for survival. Each page is crowded with panels and close ups of each character, giving the story a claustrophobic and deeply personal sense of panic and desperation.

“Pets” is a tight, violent, and almost heartbreaking story where Dredd’s stoic nature and absolute commitment to the safety of Mega City One is on full display. 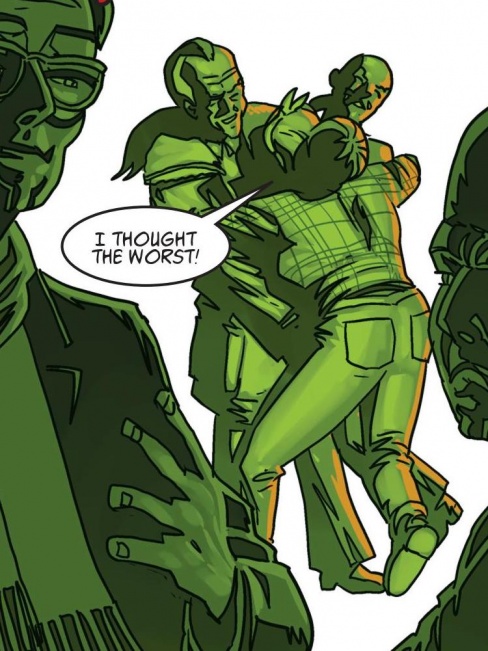 Michael Mazzacane: The easy development of character continues as Fay is taken into the Venusian shelter. We discover that our guerrillas are part of at least a polyandric family unit. Which leads to some solid jokes and much needed light heartedness about the nature of marriage. How many husbands does it take to clean a toilet? More than four apparently. This is a much needed breather after the intensity of the past few strips as well as further develop these alien cultures with clearly analogous ones in reality.

Underground the light is still washed out and weak, which means D’Israel keeps the same sort of emphasized negative space style seen in the previous strip. The lighting choice of a sorta slime green and orange gives everything a kind of sickly appearance, but is contrasted by the overall happy expressions on everyone’s face. D’Israel’s figure work isn’t as readable this time around. It isn’t the choice of colors but the choice of perspective. In the last strip it was a tense game of hide and seek on their journey, the perspectives were very close and tight. In the shelter everything is shown at a longer distance more removed from tight easily expressive faces leading to blackish masses coming together, such as when Maia hugs her husbands. Maia and the others get a couple of nice looks but overall everything is more removed. That long distance allows D’Israel to show the expanse of the shelter the Venusian’s have managed to create and give everyone a bit of privacy.

The final page hints at where the strip may be going next and a return to action, that is hopefully effective. The creative team have done a very good job of building these little story units/perspectives for the Martian Invasion that it feels like a proper invasion that is going off in many little spots with many little stories happening irrespective of something over there. It’s a method that is highly compatible with the weekly 5 page strip format of a “2000 A.D.” Prog. 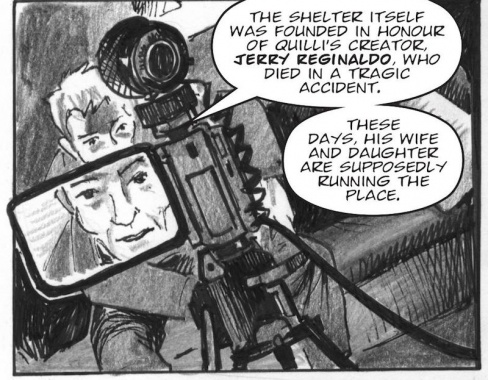 Tom Shapira: I am not quite sure what to make of this one. “The Quilli Committee” is a done-in-one horror story, mostly composed of bits and pieces you’ve probably seen before in a Stephen King story – a cult led by a rarely seen leader, possibilities of supernatural, creepy children, a spooky dull, etc. that’s fine by itself, ‘nothing’s new under the sun’ and all that, but the story doesn’t really seem to come together. It starts off well enough, with a reporter talking to the reader as he prepares to insert himself into the cult, but in the end, it just stops, with little rhyme or reason. I read it twice now and I think I’m missing something, there has to be more than this.

Possibly the problem arises from David Hitchcock’s black and white artwork – the semi-completed nature of it probably help sell the mood of the story, the ramshackle world of the cult building and society; but is also a drag on the storytelling – characters feel not fully-defined and the setting is not very clear, other than generic ‘threatening.’

Whether it is the writing, the art or the way they combined “The Quilli Committee” ends up not really being about anything but its plot. Usually stories about creepy cults discuss the way people are willing to submit for an eraser of their identity if someone promises to take their fears away and give them some answers; likewise, stories with scary children play on our basic need to love and protect young ones. This story has both of these elements but fails to play them up for anything more than the base level – this feels more like a list of ingredients for a scary story than a true terror tale. 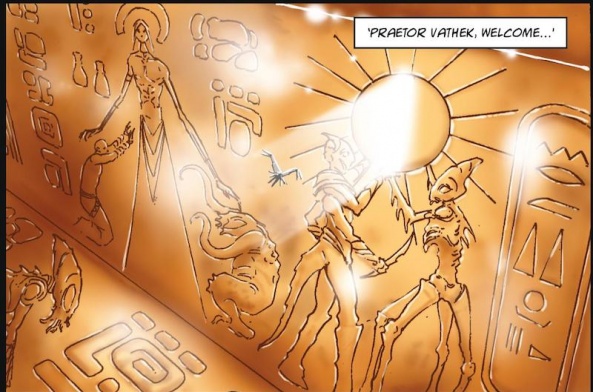 Greg Lincoln: Ian Edginton keeps expanding the scope of this story and the depth of our knowledge of this setting. Way back in chapter three we were introduced to Duke Eschatus,the one leading the invasion on Crixus Abelard and Yarrow’s home. He also introduced his plot that involved the murder of General Acastus this is now being followed up on. This week he shows the players at the top of the Thorn power structure. What all of this means for the heroes of the story is nothing but ominous foreshadowing “Kingmaker: Oroborous” is, for a 2000AD strip, already a longer one and it feels like it’s nowhere near finished. It’s expansive and feels very decompressed and expansive despite the fact it’s no longer then any other weekly 2000 AD strip. This story reminds us that there a bigger players out there, they know what is occurring and the heroes we are following could become collateral damage in the larger internecine story they know little about. This chapter and the complications it adds makes me wonder how long “Kingmaker” might run. It is now far to complex and living to end any time soon.

Leigh Gallagher’s art expands our knowledgeand impressions of the setting as much or more then the tone of the story and actions of its players. He shows us a hint of the diversity of worlds that make up the Thorne with his amazing character designs. The wild visual decadence on display expresses a lot about the values of this society and it’s leader. The pages are both beautiful and effectively portray the rot in this world. The art implies a culture that keeps slaves, is fond of opulence and exhibition of its power, visually interesting and repellent at the same time.