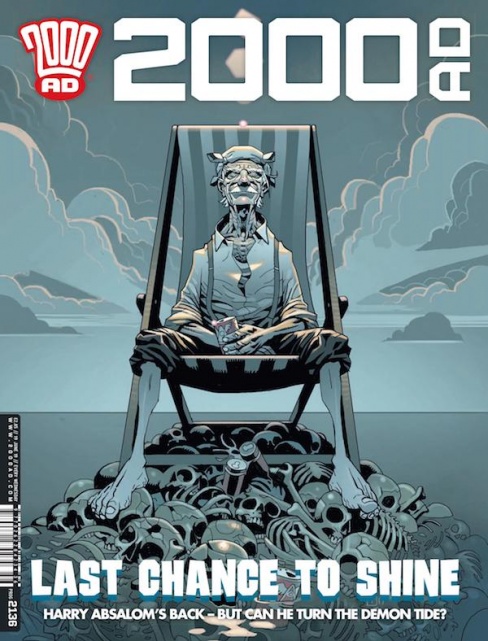 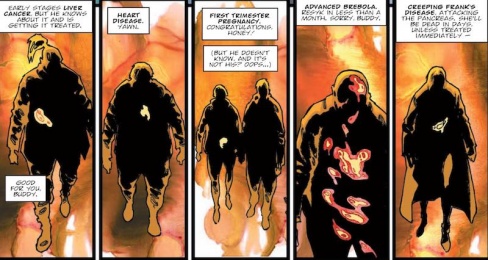 Matthew Blair: In a city where millions of people are trapped in a vicious cycle of violence and insanity “The Samaritan” introduces something almost completely unheard of in the pit that is Mega City One: a character who seems to be genuinely kind and care for the well being of others.

Writer Kenneth Niemand gives us a thoughtful and kind character who goes around the city using her unregistered psychic powers to find people with treatable medical conditions, lure them into back alleys, and knock them unconscious so she can perform life saving surgery. While it all may seem crazy, she appears to be perfectly sane and genuinely caring. She’s also smart enough to know that she should probably hide her talents and mission from the authorities, although at the end she comes face to face with the mother of all cliffhangers: a Judge Dredd who is in desperate need of medical attention.

The artwork enhances the story perfectly. While there are only four pages to work with, Staz Johnson creates a Mega City One that is vast, dirty, grubby, and filled with people who all look tired and beaten. It’s the kind of environment that needs a person like the Samaritan, who’s powers are portrayed as warm, abstract globs of light and shadow. Chris Blythe’s coloring deserves special mention with the greys and blues of the real world contrasting beautifully with the reds and oranges of the psychic visions.

“The Samaritan” is a great first part of a longer story that introduces readers a smart, compassionate, and engaging character into the eco system of Judge Dredd. Here’s hoping she’ll be able to stick around for a bit. 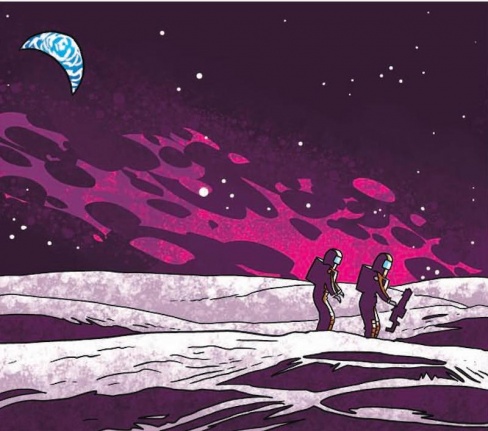 Michael Mazzacane: I’ve enjoyed the creative team jumping around to various theaters in this strip, it helps create the illusion of a large conflict in 5 page chunks. That illusion begins to break down a bit due to a lack of connective tissue, transitions can be a tad hard and sudden. Not this time as we discover who was sending that broadcast from the Moon (our actual Moon not a sudden Death Star.)

D’Israeli does a nice job of contrasting the solitude and quiet of space/the moon with the traumatic and chaotic flashbacks the Captain experiences as they reach the broadcast center. It forms the second connection from Part 9 to 10, as more people discover the Martian-Human fusion dance. The Martians had infiltrated the base, he was quickly sent to find them only to discover the saboteur looked just like them. Not just human, like his father who he hadn’t seen in years. This being a shootout D’Israeli sets things in shades of orange-red with hard lighting, giving everything a dynamic and sort of surreal appearance.

This bit about his Dad and all that is thrown in and only exists for panels, but when mixed with D’Israeli facial work he lands the moment. You see the lack of anything behind the eyes and the mournful quality in the sons. Like everything in this strip it is quick, bold, and often impactful.

I wasn’t really interested in this Moon thread the creative team were setting up judging by their last appearance but this has me intrigued. 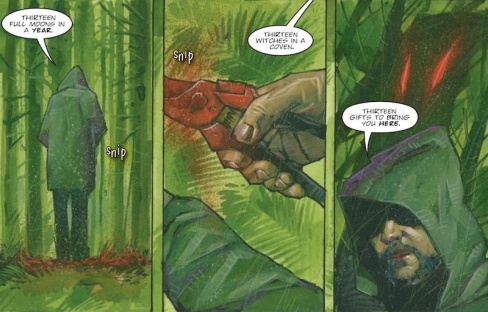 Gustavo S. Lodi: Diving into “Thistlebone” feels like visiting a novel by Stephen King. The eerie atmosphere, the supernatural undertones but, perhaps most importantly, the grounded approach to storytelling, amps the horror as it makes possible (even if remotely) that the events transpiring could actually take place in the real world.

For this sophomore entry, Eglington and Davis continue to pave the way for the investigation of the cult who has traumatized the lead character, Avril Earson, at the same time that it gradually reveals the current state of said cult. By utilizing the opening page to make these smaller reveals, the creative team picks its audience interest, without losing sight of the lead´s perspectives. It gives reader just enough, without skewing the viewpoint.

Visually, Davis masterfully applies an almost watercolor style to his brushes, which contrasts with the tone of the book, but in a sharp and fresh way. This is not your standard horror with deep blacks and dark tones, but rather one that lives in broad daylight. Color is used to make moments and characters distinct, be it on the shirt color of the main leads, as they become distant figures in the horizon, or to paint the village of Harrowvale in pastel.

All in all, “Thistlebone” is the best and scarier type of horror: the one that takes its time to introduce setting and people, the one that resembles reality and familiarity. The chosen structure (broad reveal, followed by character introspection), really aligns with 2000 AD´s serialized nature, expands anticipation for future entries. 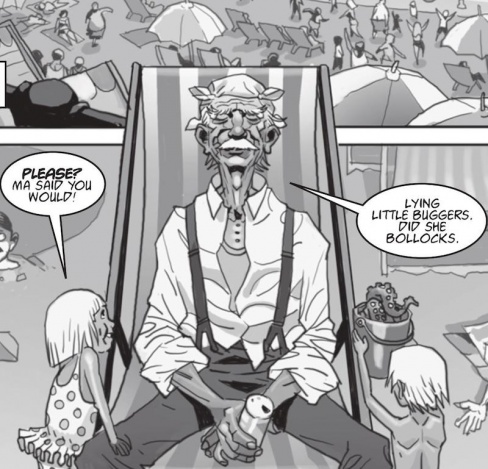 Rowan Grover: Gordon Rennie’s first “Absalom: Terminal Diagnosis” book was a super fun passion project, and the same can be said in the opening of its continuation. We get a great reintroduction to the series as Harry Absalom has a knock-out dream of his grandchildren before it and the fantasy is washed away, showing us immediately what drives Absalom the most. From this point, we’re immediately thrust into the thick of things. We’re introduced to each of his colleagues who are helping him storm the Rathborne family to save his children, and as a newer reader, I was a little lost in finding out all these characters. That said, Rennie gives each of them a distinctive voice, with the more cockney-esque, rowdy stone-faced fellow being contrasted with a kind-hearted soul and the robotic servant who feels like a cross between Alfred Pennyworth and C3P0. The latter’s sacrifice is incredibly emotive, especially how it is acknowledged by nearly no-one other than himself, showing the almost despicable nature of our protagonists even as they fight for allegedly noble causes.

Tiernan Trevallion has a fantastically gothic, Mignola-esque tone in this book that suits the setting of the Rathborne family castle fantastically and allows for some fast and almost floating action. Trevallion handles crowds well, including different types and tones of them. The start shows that he can populate a beach with people whilst still keeping things relaxed and calm feeling, whilst as soon as we get into the battle scenes, Trevallion adds some serious momentum through panel angling and a great sense of depth. Strong use of dynamic camera angling helps this as well, with one of the best moments using an ants-eye shot to show demons leaping onto a pair of helpless looking guards. The character and costume design is also super strong here, with the support cast balancing an aesthetic of Victorian and Heinlein-esque Sci-Fi, with the robotic butler looking the most intricate and interesting as he uses a key to unlock his heart and use it as a bomb (a sentence I didn’t see myself writing this week).

If you’re a previous fan of “Caballistics, Inc” and “Absalom”, jumping on this series is a no-brainer. Even if you’re just getting interested, Rennie and Trevallion have a lot to offer. There’s great character motivation, interactions, and action, and the whole debut feels distinct from the rest of the usual 2000AD lineup tonally and visually.