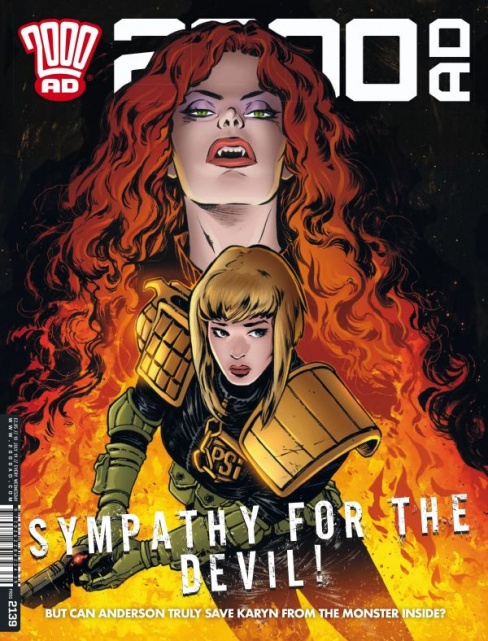 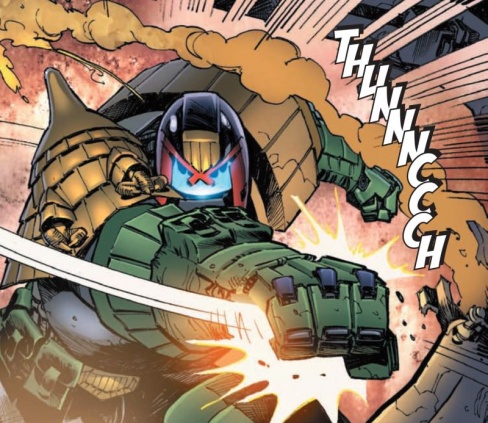 Matthew Blair: And so, the Samaritan story line comes to an end. Is it a definite ending? Yes. Is it a good ending? Well…

Over the past thirty years of publication, there haven’t been a whole lot of people who have been able to challenge Dredd’s ironclad belief in the law like the Samaritan. How does Mega City One’s greatest law man react when his life is saved by a person breaking the laws that he is committed to protect?

It all comes to a head in “The Samaritan Part 4”. The Judges manage to track Dredd and the Samaritan down and storm the building. The Samaritan attempts to flee for her life and freedom while a desperate Dredd attempts to talk her down into surrendering to the Judges. Sadly, this story ends in the way that most confrontations between the law and criminals of Mega City One end: with the Samaritan dying in a hail of gunfire. In a way it’s kind of sweet. Dredd shows the closest thing he has to compassion and genuine concern for another human being, even if she is a criminal.

And then writer Kenneth Niemand throws a in a twist ending that renders the entire story null and void. I’m not going to spoil it here, all I’m going to say is that it’s one of the more cliché twist endings and it made me sad and a little upset. Not upset enough to hate the story, just a little disappointed.

As for the art, I stand by everything I’ve said about the artwork over the past three progs. Staz Johnson and Chris Blythe are in their element here and it would be very nice to see them work on more Dredd stories. Personally, I thought the highlight of the art were the last two pages, which show the tragic end of the Samaritan and her ultimate fate. The art paints a gripping and emotional scene that helped alleviate some of the shock and anger over the ending.

Michael Mazzacane: “Indigo Prime” returns after the Christhulu event and everything is on fire, or is and isn’t because of quantum mechanics and stuff. Which is a good way of explaining this strip, it nominally is on “fire” the ship is supposed to explode soon. Yet the art from Lee Carter and scripting by Kek-W couldn’t feel further from the case. Lee Carter’s art work is calming and oddly serene. Kek-W scripting is built around the cast bouncing off one another. All the while the computer decrypts a metaversal message that could unlock secrets of the universe. Much like the idea of the ship being in grave danger, there is both seemingly a lot going on in this strip and not all that much. Which makes for a somewhat confounding first strip, things begin to cohere a bit as it progresses but as an individual entry it isn’t the easiest jumping on point.

Perhaps the sense of pace would make more sense if there wasn’t the double page splash for a title card moment. Carter’s art in that spread, showing Doctor Benway mid escape into the reaches of the universe is technically well done and beautiful. In particular the way they balance the purples and blues of the universe with some warmer elements, gives the page a surprising amount of depth with Benway’s figure being the anchor point. As a piece of comix storytelling, it dosen’t serve much of a purpose. All told the creative team use two pages for four panels. It’s just inefficient use of real estate.

understandable. Even if the dissonance between Carter’s calming art and the cast is at each others throats persists, the storytelling involved is plainly better. 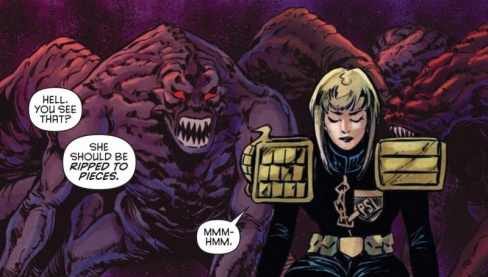 Greg Lincoln: It may be down to the difference between English and American English because reading this week’s part takes some deciphering to really kind of understand. “Anderson, Psi Division” is a police procedural, so a bit of mystery is expected, but some of the dialogue here lead to a bit of confusion. Emma Beeby clearly spelled out why Karyn might just want to stay in this place where she to where she finds herself abducted. A “being(?) there, called the “Lotus” appears to be able to keep her from becoming Cassandra. But as we learn later in the story this freedom is like to cone with a price. Sadly, things get murky when Anderson and Flowers are working the case. The dialogue though solid enough leaves a little bit too much unclear or just oddly stated enough to make it hard to say definitely what we learned. It’s clear that Beeby gives Flowers and Anderson enough of a vision of the place so that they can attempt to free Karyn. The way it’s give though is a bit too cryptically delivered to instill curiosity over confusion.

The art by Aneke and Barbara Noenzo on the other hand is clear about what it’s saying. They leave no doubts about how we’re supposed to feel or with what is happening for the most part. It would have helped if we could have seen what Flowers and Anderson saw on the last page but that’s my only quibble. The sequence with Karyn shows her progression from distress and worry to a relative calm now freed fro her constant fear. The colors instill a great amount of feeling in the scenes, sometimes lightening an otherwise neutral moment. I’m not sure it the happy expression on Anderson’s face when she reminisced about her past but it was an effective moment. 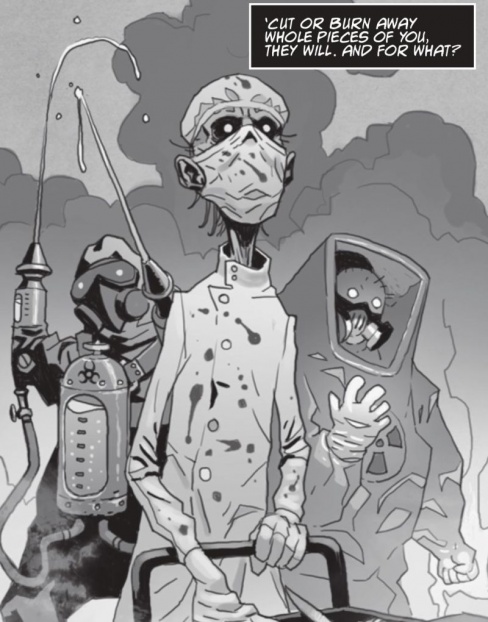 Rowan Grover: This chapter of ‘Terminal Diagnosis’ is a great look into what drives our titular protagonist and what he’s truly concerned about. Rennie provides some meaty psychological discourse here, with Harry quarreling with an entity placed inside him to have him at odds with himself. There’s a very Alice In Wonderland tone to it as Harry runs down spiraling hallways chased by doctors and pastiches of himself in nurse uniforms, with the narration constantly at his neck reminding him of his deep doubts and fears. What’s satisfying though is that the prog doesn’t dwell on torturing Harry. We get to see him strike back as he realizes that this mirror version of himself can’t be a product of his own mind, capitalizing the shot with a satisfying punch and Harry yelling “Well, I’ve had it with you, sunshine!”. Rennie moves the plot on quite naturally from this point to even creepier ghoulies, to pull us back in for more next week.

If the narrative was invoking Lewis Carroll’s Alice, Trevallion’s art visualizes the environment and story with an American McGee’s Alice-style twist. The hallways are angular and splattered with blood, the doctors and nurses are supernatural and horrific, and the whole prog oozes with a gleefully macabre visual tone. I love the page of the mirror-Harry creeping up closer to the real one as we see that even this darker version of our protagonist riddled with boils and scars still has the same look of steely resolve, that makes this psychological dig even more believable. The next sequence with Harry making a comeback provides some brutally kinetic action. Harry delivers a punch so heavy that even after connecting, it throws him to the floor throughout the next three panels. Trevallion is doing killer work with the pacing and design of this book that it’s a crime to be missed.

‘Terminal Diagnosis’ continues to be a great look into the characters of “Absalom” and by an extension, “Caballistics, Inc.” This prog proves to be a great dive into Harry’s psyche, with some enjoyably macabre art bringing it to life. 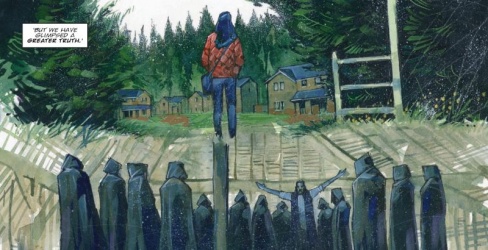 Gustavo S. Lodi: Last week, “Thistlebone” was a bit calmer than previous instalments, taking a bit of a breather as Avril and Seema explored Harrowvale’s woods. This time around, things start to heat up again.

Right from the start of this chapter, “Thistlebone” allows artist Simon Davis to flex his muscles around pacing and perspective. There is a lot to appreciate on those opening pages: immediately, as the ominous narration intersects and contrasts with the displayed imagery. But it is done even better in a simple context, that of an individual eavesdropping on a conversation, but framed in a very clever way. The way that the page and panels are displayed, the perspective is that of the eavesdropped, coinciding with the reader’s. It makes the audience feel like the intruder on the situation, adding to the sense of uneasiness.

The same attention is paid to color and clothing design. There is something being hinted and played at that will remain out of this review due to spoiler reasons, but the manner that Avril and Seema are shown seems to lead to an interesting development. All that will be said on these paragraphs is… watch the clothing.

Finally, the very final page of this chapter is amazing to look at. Terrifying, sure, but amazing nonetheless. The combination of the narration and dialogue leading to this reveal is further proof of how aligned Eglington and Davis are on crafting a tale to be noticed and remembered.