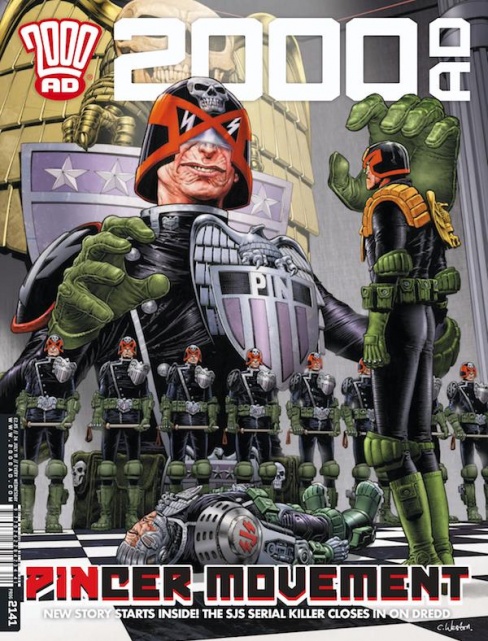 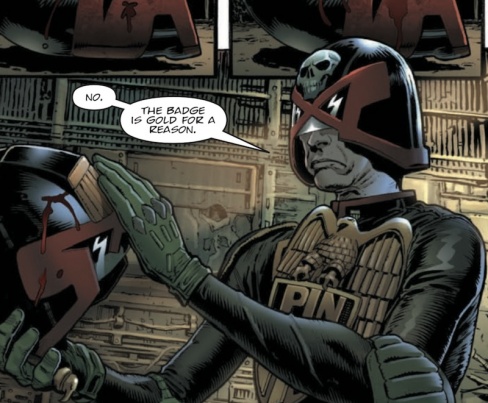 Matthew Blair: So this story does require a bit of prior knowledge of Judge Dredd lore, but it’s worth the research because “Control: Part 1” is very good.

“Control: Part 1” opens with the re-introduction of Judge Pin, a member of the Special Judicial Squad and a serial killer of fellow Judges. The SJS acts as a sort of Internal Affairs unit for the Judges of Mega City One, and they have a history of being brutal, violent, and terrifying. Judge Pin firmly believes that the entire system of Judges is weak and corrupt, and that the only way to fix everything is to cull as many of the weak Judges as possible, and Dredd is now on her list.

Writer Rory Williamson sets up a great showdown between Dredd and Pin in this story. While Pin has the appearance of a frail old lady, she is absolutely terrifying and capable while Dredd is presented as a man who is beginning to feel the weight and consequences of all the terrible choices he’s had to make over the years.

Artist Chris Weston and colorist Chris Blythe turn out to be the perfect collaborator on this story. The artwork leans towards a more realistic and run down look that is perfect for Judge Dredd stories while the colors make everything appear dirty, dark, and ominous. Also, there’s a brilliant surrealist moment near the beginning that does a great job of showing just how crazy Judge Pin really is.

“Control: Part 1” is the first part of a longer story that sets up a showdown between one of the most terrifying killers Mega City One has ever seen and one of the City’s most stalwart defenders. It’s an unstoppable force meets unmovable object situation that has the potential be a great story that will shake up the Dredd mythos forever.

Michael Mazzacane: The multiversal business world did not take the apparent death of Clive Vista, their crew, and the loss of the HQ well. It wasn’t the loss of life that bothered them so much as the financial one, quintillions in licensed Black Science lost in a flash. Such financial damage requires an emergency meeting of the board, which comprises the majority of this strip. This sequence from artist Lee Carter is a more workable fusion of the weird science of “Indigo Prime” and digestible layout that constrains everything. This board meeting, and the first half of the strip are a series of grids. These layouts highlight the strange but consistent membership of the board. On one side you have Gordon Gekko as a gecko and Patrick Bateman as himself. On the other side you have head the cybernetic head of forecasting, who tenders his resignation, and loses his head over not seeing this coming. As well as other odd balls and punny characters.

The grid layout lets Kek-W land some eighties references from Gekko and Bateman, somethings never change. The Gekko gags worked better because they had an extra visual element. Kek-W riffing on that eighties music joke from American Psycho didn’t work out as well. Meanwhile the other board members were allowed to be their weird selves. The nine panel grid allowed for Carter to draw everyone as a large bust so you got a good look at character deigns.

Carter’s contained but weird page design comes through when things once again return to the former(?) HQ as we once again revisit the seconds leading up to the bang. That first page is this nice sort of entrapment through a series of long horizontal and vertical panels that cut off space an drive your eye to the series of smaller panels, where all the action is. Somehow little business nihilists have gotten on board. On the next page Carter drives home the act of getting closer to the tear in the universe from previous strips by showing it through a series of increasingly close and thin vertical panels. The content of this strip as it relates to larger narrative questions and progress is a bit up in the air, but there is some interesting craft to poke at in these five pages. 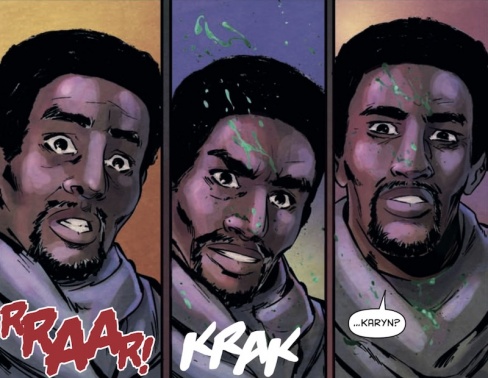 Greg Lincoln: If the last couple weeks of storytelling left you a bit confused or cold let me say that this week has some real hooks to get you hooked again. A lot of the scenes leave you with a few curious mysteries to keep you interested with a final scene that sinks the hook. A lot of Emma Beeby’s tale happens in a possibly theater of the mind this week. Anderson entering the Lotus seems to have stirred up some things and maybe did more then she intended. We genuinely feel as the last panel arrives that Anderson herself is in over her head and there is a genuine atmosphere of risk in this story.

The art is a bit ethereal, Technicolor and lightly metaphorical. The first page is grounded in a real-ish place and beyond that it’s up to anyone’s guess where it’s happening. The art implies that the action is taking place in a place where the natural laws don’t seem to apply and the final panel implies a lot more about the nature of the Lotus. The art is sold enough to hook us into the moments of actions that take place after Karyn takes matters literally into her own hands. It’s not stand out comics but it’s dam sold storytelling from this creative team.

Rowan Grover: We jump back to the ninja and the cockney this part, and Rennie has developed their dynamic to become infectiously fun by this point. The action is filled with zombies and other supernatural beasties and Rennie lets it take the floor while sprinkling on dialogue like “‘Ave you met me mate, Geoffrey?” as a garnish. And then? Rennie pulls the floor out from under us, having the Cockney betray our young ninja friend and shove him in front of the impending ghoulies, leaving him to fend for himself. Of course, Rennie paints the cockney as entirely within character, and the event still manages to be darkly comedic. When the cockney finally meets up with Harry Absalom, however, his on-the-nose script about how no-one else made it proves to be chilling in the worst possible ways.

Trevallion’s art is firing on all cylinders here, moving in perpetual motion and full of kineticism. The body language of the two characters is something I want to highlight especially, considering how the ninja looks constantly attentive and fully engaged, while the cockney takes his fighting with considerable relaxation and slackness. It’s like comparing a Frank Miller “Daredevil” scene to a Jack Kirby “Fantastic Four” scene of The Thing brawling it out. The composition is really solid too, especially as we see the betrayal sneak up on us visually. Considering that Trevallion is such a high-detail artist, it’s shocking when he drops a blank background on the shot of the cockney breaking the leg of the ninja for him to fend for himself and serve as bait. The rest of the prog is manic, high detail action as usual, which is nothing to complain about, of course.

“Absalom” still proves to be one of the most manic and entertaining series in 2000AD, throwing wild supernatural and sci-fi concepts at the reader with a completely level straight-face about it. The scripting is tight, the characters are fun, and the art is endlessly entertaining. 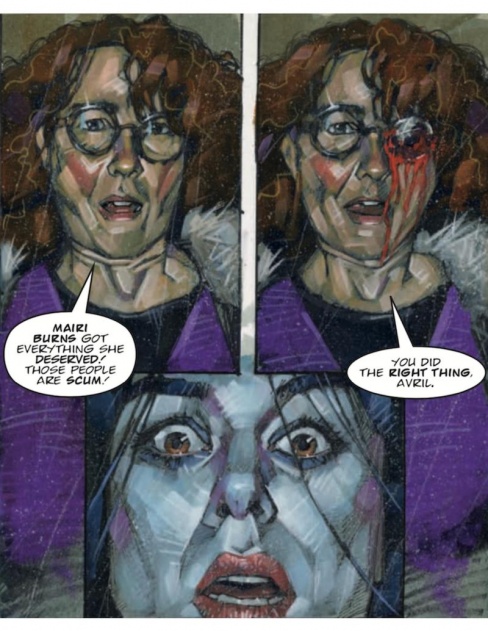 Gustavo S. Lodi: For the first time on its initial seven chapter, “Thistlebone” feels a little disjointed on this entry. Mind you, it was still beautifully drawn, the atmosphere remains on-point with colouring, drawings, and scrip walking hand-on-hand. However, the pacing of the plot and how certain reveals are presented felt too quick for their own good.

As any horror story, “Thistlebone” works best when the same amount of terror is hidden from what is shown. That way, when something does erupt, it feels much more warranted and deserved. This series certainly got it right when it came for keeping the suspense away from prying eyes, building up the mental paranoia of series’s protagonists/

On this chapter, some actual horror and weird attitudes start to be shown out in the open, but those reveals do come a bit out of the left field. Characters simply break into strange behaviours and, while some of that has been hinted before, it seemed to have skipped a beat or two.

The final pages of this update do clarify things a bit further and are welcomed as part of the broader narrative, further indicating that the real horror may be internal rather than external. Hopefully the next chapter will bring it together in a more consistent manner, as presented so far.