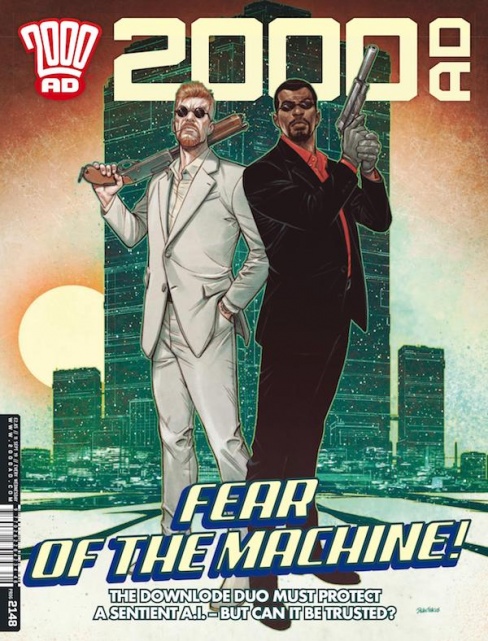 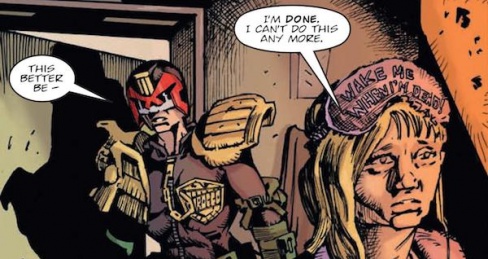 Matthew Blair: Caught between two powerful organizations who are relentlessly flexing their metaphorical and physical muscles, Barbarbara Grimm is in truly dire straits, and it stands to reason that she probably won’t survive.

The best part of Mike Carroll’s script is how he is able to show so much with very little space. With just five pages the story shows just how hopeless the protagonist’s situation really is, and just how ruthless and uncaring both factions can be. It’s actually kind of refreshing to see Judge Dredd portrayed in a much less heroic light, as the idea that the Mega City One Justice Department are no better than the common criminals they’re tasked to hunt is all but confirmed.

As for the actual criminals, their reach is portrayed as a bit more subtle, but not less deadly. They’re response comes courtesy of the city’s auxiliary police, citizens who are supposed to be enforcing the law, but turn out to be employed by the various gangs to do their dirty work.

Nick Dyer’s artwork continues to be a fantastic addition to the story, enhancing the morally ambiguous nature of the story with plenty of shadows, blood splatter, and a muted color scheme courtesy of Quinton Winter. It’s a dark and dingy art style for a dark and dingy story and it works brilliantly. There’s not much left to say about the artwork until a new story comes along.

“The Fall of Barbarbara Grimm” Part 3 represents a breaking point for the main character. She knows that both sides don’t care about her or her family, and she knows that either side will hurt her if she doesn’t comply. All that is left is rage and anger, and it’ll be interesting to see what happens next. 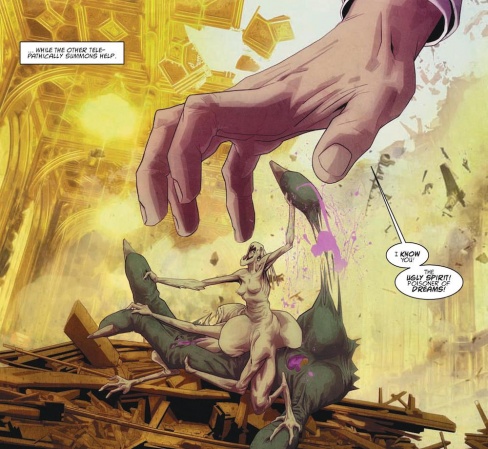 Michael Mazzacane: This batch of “Indigo Prime” has been a rollercoaster ride in terms of understanding it. Some storytelling decisions, in particular how they started it off, were not the best use of their page budget. Overall though things have come together in an absurd meta fashion totally fitting this strip leading to the big finale in part 10.

The creative team spare no time in anserwing the burning question from a couple of strips ago, if that is indeed our good Dr. Burroughs as a several ton sized pill of, seemingly, oxy does have his attention.

“Prime” isn’t really an action strip, though such sequences have often been solid, it’s more about ideas. Still the speed at which they dispatch the Huictiigra, the nightmare parasite, is amazing. Maybe even a bit too fast, but Kek-W and Lee Carter make it work, if Danny isn’t going to do it why not squish it like a bug in the giant palms of Dr. Burroughs. At least for a little bit, ideas are tricky things to destroy. How they dispatch and close out that plot follows the absurdist logic of the strip perfectly as it just goes for it and stops trying to be about something for a second.

Overall the page by page pacing and writing in these final 8 pages is excellent, in part due to that absurd logic giving them an excuse to just go for things. As well as write cheeky narration like “Imagination (jump cuts) Matter.” It might not be a groundbreaking use of the medium, but Kek-W and Carter do lean into the strengths of this medium for tying everything up.

While this strip has been doing lots of wild things, there has been a consistent character arc to it with Danny. As the crew of the Indigo separate and come together he has dealt with the simmering rage and feelings of distrust from his remaining crew for what they did to him. He rather use his new found power to fight the Huictiigra, even though it isn’t a good idea, out of a lust for that powerful high and to piss off the former friends that made him into this thing. It’s the kind of moment I wish they had a bit more space to explore, but it is an overall earned moment. As is his decisions in the final part of the strip that appear to setup the next round of “Indigo Prime.”

‘The Fall of the House of Vista’ was a weird one that strained against the constraints of normal Prog strip at times, but it was also one of those only in a comic book sort of stories that I can’t help but appreciate. 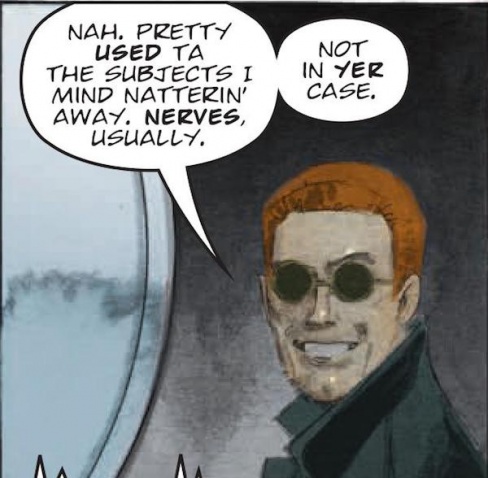 Gustavo S. Lodi: The emergence of artificial intelligence has been so overused in current pop culture and media publications as a whole, that it becomes incredibly refreshing to see a new take on an old trope. “Sinister Dexter,” on its ‘Narrow Minded’ storyline does that, by exploring the very early stages of a massive AI becoming self-aware, and how the interaction with their human creators and caretakers would play out.

First of all, the art style by Yeowell is better suited to this chapter than in recent entries of this series. The more minimalistic approach of the script, with mostly indoor setting and quieter, introspective moments, walk hand-in-hand with the more urban, downplayed art style, where a more explosive flair to action and magnitude would be amiss. The attention to facial expressions and body language is very strong, and it adds to the overall sense of uneasiness the plot is calling for.

It is, however, on Abnett’s script and dialogue that ‘Narrow Edge’ shines the brighter. The back and forth among series’s protagonists and the emerging AI is nothing short-of-brilliant, as it plays with their own different personalities, and how the AI adjusts it’s own speech to reach it’s objectives. More than that, the emerging intelligence becomes the ultimate unreliable narrator, not only because it could (or not) be hiding it’s true nature, but it actually expands unto the larger situation all the players are found in.

All in all, this is one of the best recent chapters of “Sinister Dexter” certainly playing to it’s advantages of noir, introspective discussions, mixed with an investigation of what is actually going on, that aligns with the detective aspect of both leads. 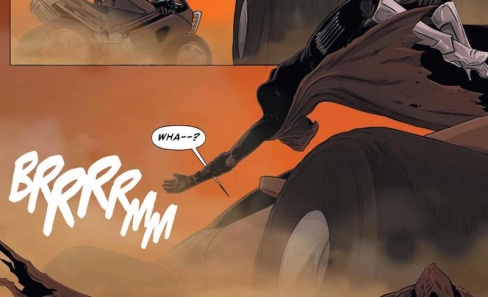 Christopher Egan: The final piece of the puzzle comes smashing into place in ‘Red Road Part Three.’ The action ramps up even more so than in part two, focusing more on high energy acrobatics and crashing vehicles than the wild use of weaponry and extreme gore from the last chapter.

Ewington again plays down the actual dialogue while focusing on emotion and getting to the truth of the story without heavy exposition. His deftness for clipped conversations that get the point across is evident in every panel. He brings this miniseries to an exciting end with big reveals that may not be entirely shocking, but are true to the world and at the same time, are wholly satisfying.

What else can be said about Willsher’s artwork that hasn’t been discussed previously? The guy is a master at bold sci-fi action and suspense. Every page is a high octane delight that elevates Ewington’s script and adds to the pure joy in reading this story. His color work is everything readers could ask for in a high speed chase across the deserts of Mars. The burnt reds and oranges make up the perfectly bleak alien background that only helps highlight the blacks, browns, and silvers of the characters outfits and vehicles.

From start to finish this miniseries is exactly the type of action tale that readers have come to love from the pages of 2000AD Progs: Quick blasts of action the keep the blood pumping, without the need for over analyzing. ‘Red Road’ delivers on across the board.

“Tharg’s 3rillers: Red Road Part Three” makes good on its promise of thrills, coming to an explosive end; sufficiently closing out this story and leaving the door open for more adventures with Helix and the Martian wastelands. 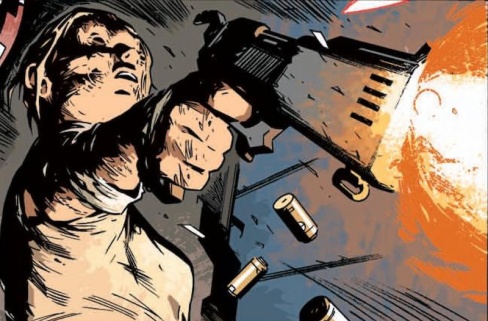 Christa Harader: The doctor and Atalia don’t entirely see eye to eye, there’s a major death, and Atalia might finally have a chance to go home.

The confusion of last week is gone, and Rennie goes for a much more streamlined installment with just Atalia, the doctor and Raksha to deal with for the bulk of the pages. Coleby and Caldwell bring their usual blend of heavy drama and subdued colors to the page, with a few odd facial expressions here and there and some crowding in later panels. De Ville’s lettering is good, as usual, but this font boasts a bit of extra space between the Ds and Os that trips the eye a little bit, as two instances are present in the first balloon we see.

It’s nice to finally get a bit of resolution after a few weeks of treading water and moving characters from location to location. Those choices are good for tension but not so great for moving the story along, and as a result things are starting to wrap in a bit of a rush. Atalia does have a touchstone emotional moment this week, however, that mitigates a bit of that unevenness. With just one week to go and our villain decidedly handled, it’ll be interesting to see if the rot travels further up the command chain than we think.

Given Atalia’s history, the answer’s most likely yes.